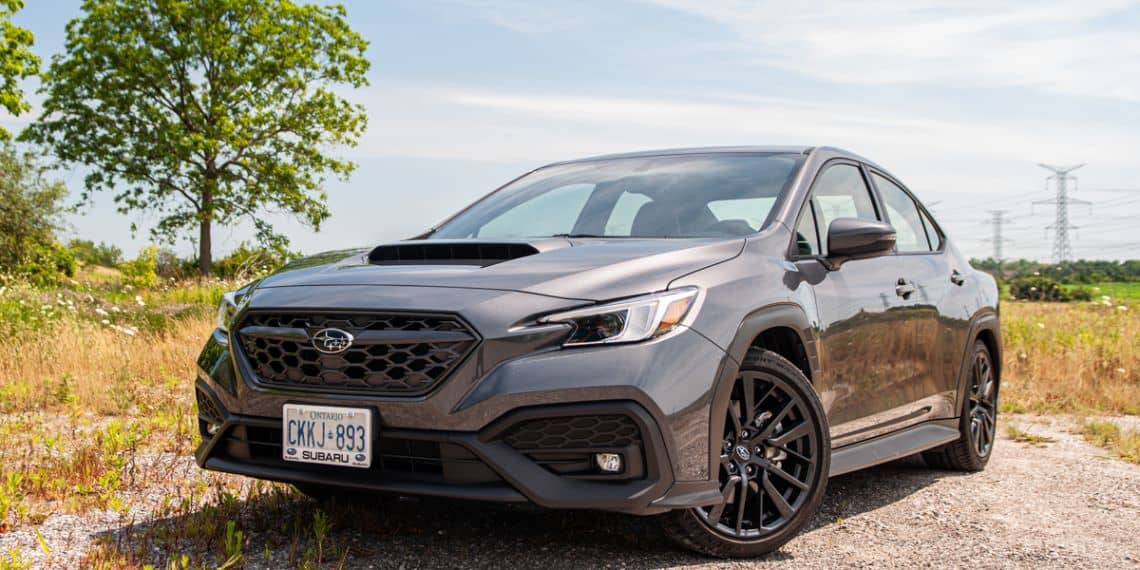 If you were outraged by the 2022 Subaru WRX’s body cladding, here’s a harsh truth: you are not special. Ever since Subaru introduced the WRX to North America in 2002, fans were angry over the looks. The Bugeye was too bug-eyed, the Blobeye was too blob-eyed, and the Hawkeye was more so lipstick on a pig. Don’t get me started on the outrage when the totally redesigned one dropped in 2008, before the widebody glow-up. 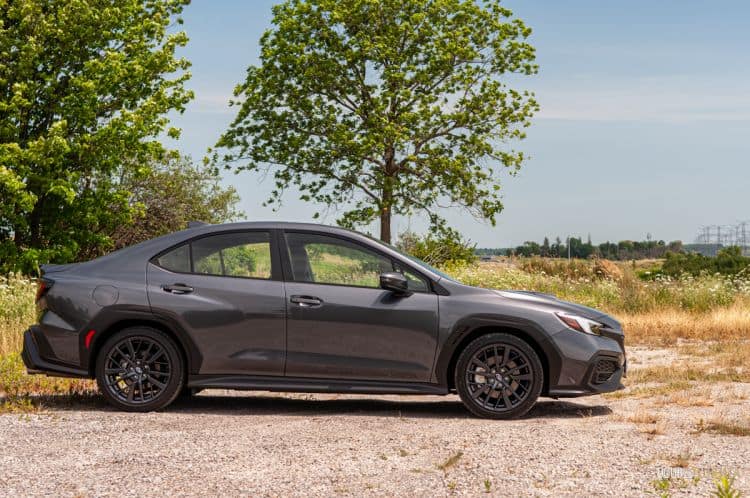 So, the fact that fans were up-in-arms about the newest WRX’s body cladding was hardly surprising. We get it. Yeah, it doesn’t look great in pics. Yup, it’ll eventually grow on you to the point where one day, you’ll think it actually looks kinda good. You know it won’t matter at all once you drive it — but unless you live in a vacuum, the new WRX is a little disappointing in that department, too.

It’s unfair to expect a new version of a performance car to be as raw and communicative as its predecessors, and that certainly holds true with the new WRX. Under the skin, it isn’t that much different than before: there’s still a turbocharged Boxer engine under the hood, it’s still hooked up to a six-speed manual, and that power still goes to all four wheels. 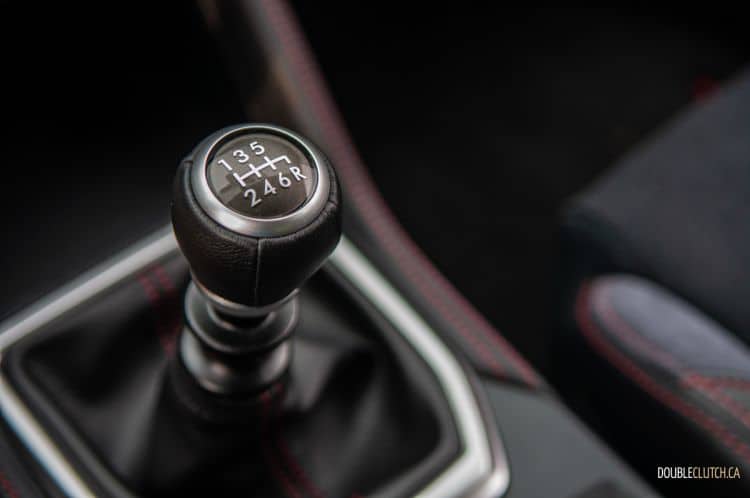 This time around, the 2.0-litre engine is gone, replaced with the larger 2.4L Boxer turbo-four cribbed from the Ascent, Legacy, and Outback, massaged to put out 271 horsepower and 258 pound-feet of torque. That’s not much of a bump, but it’s not really about the numbers: the beefed-up internals, along with the deliberately lower peak boost — the new one tops out at 12.3 psi, versus 22-ish in the previous WRX with the 2.0 — means those of you out there keen on unlocking more power shouldn’t have to look too hard. Nudge nudge, wink wink.

That said, if you appreciate your new car having a warranty, the new WRX’s kick is plenty to keep things entertaining. Off-boost, the new 2.4 feels more responsive and torquier. On boost, once you overcome that slightly old-school hump of turbo lag, the WRX is pretty punchy between 3,500 and 5,000 rpm. It certainly isn’t as forceful as the WRX STI of yesteryear, but it’s plenty to put a smile on your face. You’ll want to keep an eye on the tach, though: when you’re giving it the beans, the WRX’s 6,000 rpm redline comes hard and fast, and it’s a wet blanket on the fun. 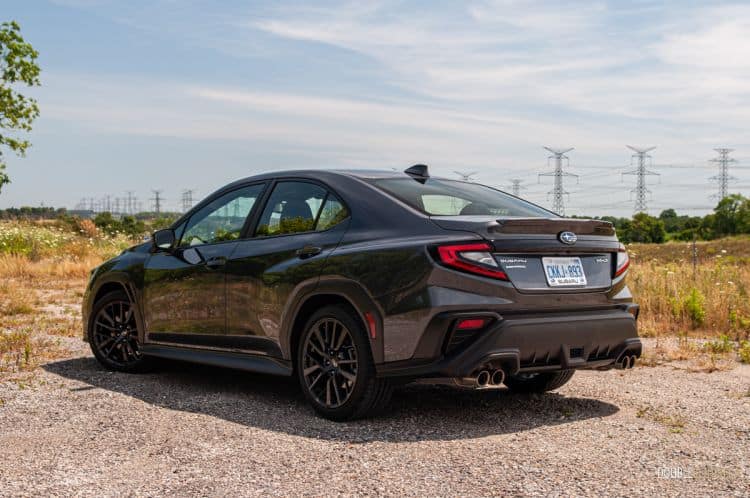 As before, the 2022 WRX comes standard with a six-speed manual transmission. Throws feel long and rubbery, but the clutch sees a vast improvement over the old car. Not only is rev hang drastically reduced, but you can actually feel when the clutch starts to bite, and the slightly softened throttle response means the WRX is much easier to drive smoothly, both in a relaxed manner and as a hooligan. For those of you who prefer not to shift gears yourselves, Subaru does offer an automatic transmission. Just don’t call it a CVT, even though it’s actually a CVT.

Much ado has been made about the 2022 WRX’s exterior styling choices, but Subaru doesn’t care. The body cladding is certainly an acquired taste, but it’s only a matter of time before aftermarket specialists and enterprising fans come up with solutions that are less of an eyesore. 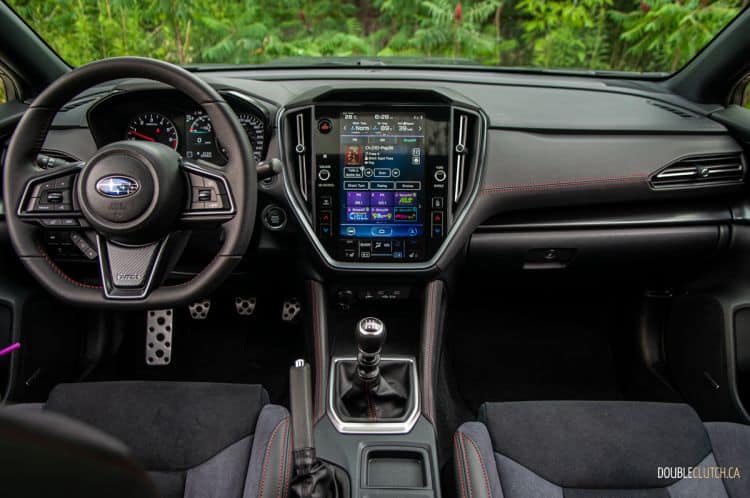 Inside, the new WRX is a marked departure from the days where owning one of these all-wheel-drive pocket rockets also meant living with a chintzy interior. The cabin feels much more grown up, while maintaining that practicality Subaru is known for. Fit-and-finish is improved compared to the outgoing WRX, visibility all around is excellent, and the new WRX’s added overall length, wheelbase, and width translate to more interior space all around.

Rather than the simpler infotainment and centre stack setup we’ve seen in the Impreza and Crosstrek, the WRX draws inspiration from the setup we’ve seen in the Ascent, Legacy, and Outback. Base cars get a pair of seven-inch touchscreen displays stacked atop each other surrounded by matte black plastic, but the higher-spec Sport and Sport-tech trims get a portrait-oriented 11.6-inch touchscreen. We’ve said our piece before about this arrangement, so at the risk of repeating ourselves, we’ll just leave it at this: at least there are physical volume and tuning knobs, and at least Apple CarPlay and Android Auto are standard. 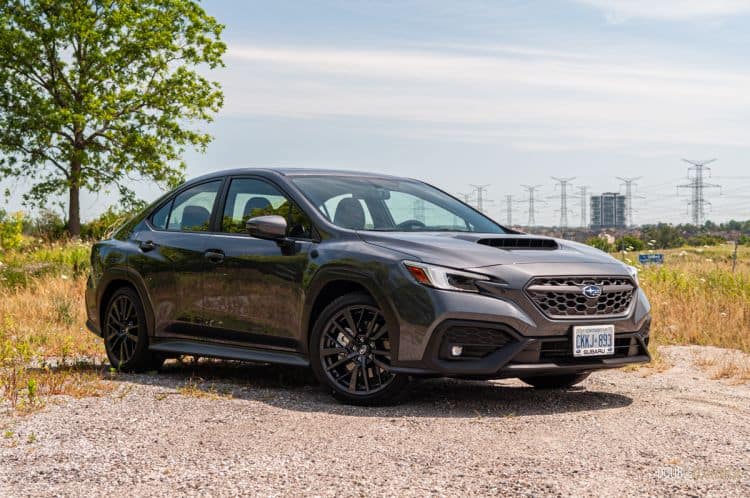 In a vacuum, the WRX comes together quite well. Sure, there’s a modicum of practicality to go along with the performance, but like the WRXs that came before it, this newest one is best enjoyed as you channel your inner Colin McRae. The new engine is punchy, rowing through the gears is a treat thanks to the reduced rev hang and improved clutch feel, and if you don’t mind the ride quality — it’s a little harsh over bumps and rough pavement — the new WRX will have you hunting for tight on-ramps and twisty tarmac. There’s no artificial tomfoolery and drive-mode-nonsense here; with the new WRX, it’s between you and the car. 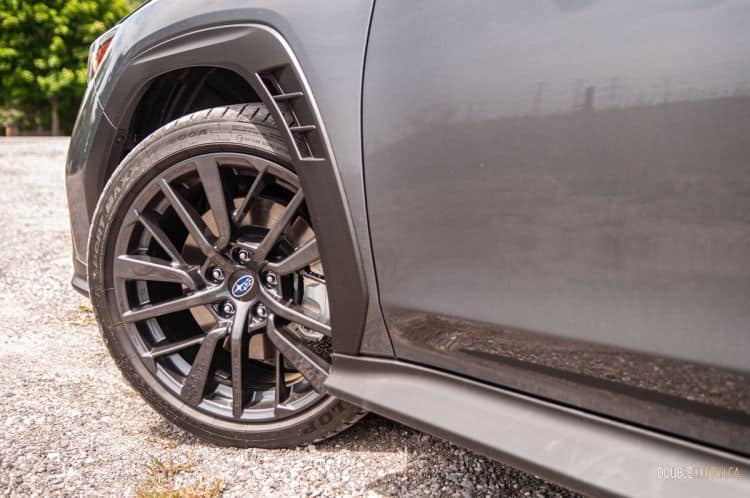 But the world of affordable pocket rockets looks very different these days. The latest VW GTI remains the king of the hot-hatch castle. The turbocharged Mazda3 is a more upscale, stylish, and refined answer to the same question the WRX tries to answer. And then there’s the double mic-drop from Hyundai: for similar money to the WRX, the Elantra and Kona N are veritable firecrackers and have the goods to put a much bigger smile on your face. If AWD isn’t a must-have, you can probably do better elsewhere.

But if AWD is a strict, non-negotiable must-have, then the 2022 Subaru WRX carries on the legacy of a practical pocket rocket ready for pretty much any kind of weather Mother Nature can throw at it. At least you don’t have to look at the body cladding when you’re behind the wheel.