Nobody buys a Jeep Wrangler because it’s the “logical” choice. These boxy brutes are big, expensive, and frankly, they’re a chore to drive on the highway. But despite some fairly obvious shortcomings, people absolutely love these things – and the 2021 Jeep Wrangler Rubicon 4xe makes it easy to see why. 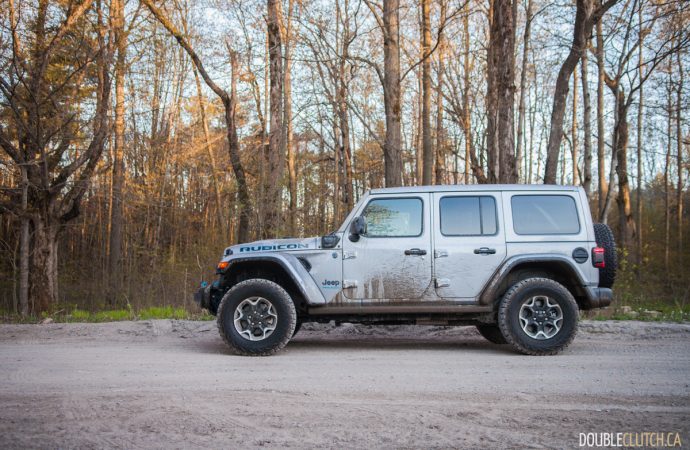 Until this year, the thought of an electrified Wrangler would’ve been unfathomable. Then again, the latest generation of Jeep’s go-anywhere brute is a harbinger of change: you can get it with a diesel, there’s a pickup version, and you can finally get good headlights from the factory! The addition of a plug-in hybrid powertrain is inevitable, really, even if it isn’t quite the best powertrain you can get in a Wrangler – depending on your needs, that is.

The 4xe starts out life as a regular ol’ Wrangler powered by a 2.0-litre turbocharged four-cylinder engine, good for 270 horsepower and 295 pound-feet of torque. Stout numbers for sure, but paired to the two electric motors under the skin – one is mounted just ahead of the engine, and the other sits between the engine and transmission – the 4xe pumps out 375 hp and 470 lb.-ft. of torque. Until the Hemi V8-powered Wrangler 392 arrives later this year, the 4xe is the most powerful Wrangler you can buy today. 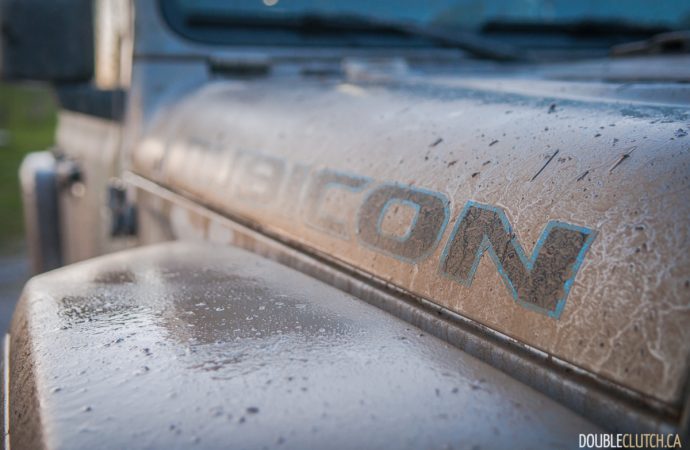 And that’s definitely saying something, because until now, you could never really call a Wrangler quick. With the instant torque from the electric motors working together with the gas engine, the 4xe shoots forward from a stoplight surprisingly hard. When you aren’t goosing the go-fast pedal, the Wrangler 4xe happily putters around town with barely a peep in electric-only mode; we eked out about 35 kilometres running on electrons, and while that certainly isn’t as much as other PHEVs out there, it should be plenty for shorter commutes.

As far as charging goes, you can fully replenish the Wrangler 4xe’s electrons in about two hours using a Level 2 charger – or 12-ish hours using a conventional household plug – but it won’t take a DC fast charger. If you’re so inclined, you can even save those stored electrons for later, lest you burn ‘em all up in one shot on the highway. 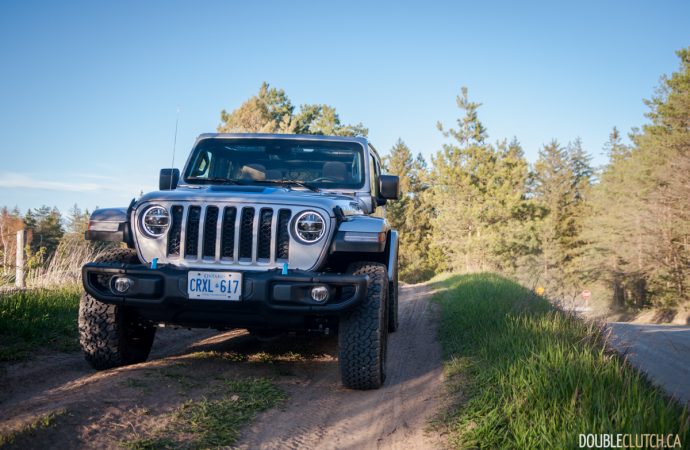 And you’ll definitely want to save (or replenish) the Wrangler 4xe’s electrons as much as you can. With electric-only range fully depleted, and the electric motors pitching in as much as they can around town and on the highway, we averaged 11.6 L/100 kilometres – which isn’t great, especially considering we saw 10.6 L/100 km with the Gladiator EcoDiesel in a similar mix of city and highway driving. That turbo-four doesn’t sound particularly great, either, when pushed hard.

Speaking of its highway manners, the 4xe is still a Wrangler, for better or worse. The latest evolution is certainly the most livable and comfortable a Wrangler has ever been, but it’s still a chore to drive at higher speeds thanks to its twitchy steering, generous wind and road noise, and bouncy suspension – though admittedly, it’s a champ at soaking up bumps, ruts, and potholes, on-road and off. 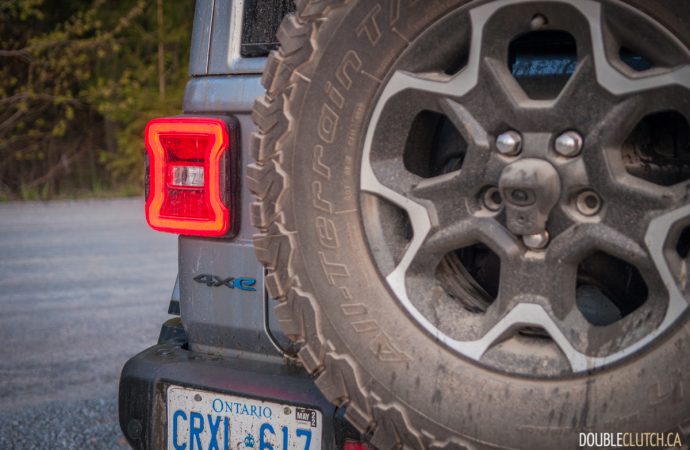 Still, the 4xe comes together respectably well. Once in a while, you’ll feel a slight hiccup at lower speeds as the gas engine kicks in when you ask for more beans, but transitions between gas and electric are mostly imperceptible. The only transmission available is Jeep’s buttery smooth and incredibly well-sorted eight-speed automatic, and the regenerative braking is quite strong on its max setting – give yourself enough space and you won’t have to touch the brakes coming up to a red light, heading down a steep hill where that cop is sitting with a radar gun, or while chewing up a gnarly-ish trail.

Seriously, though, if you thought a plug-in hybrid powertrain would compromise the Wrangler’s off-road chops, you’re so very wrong. The Dana front and rear axles, locking differentials, aggressive approach and departure angles, and gnarly all-terrain tires – just a handful of the Rubicon’s off-road-ready kit – are ready for pretty much anything. Rutted trails and muddy puddles are practically a walk in the park with this thing. You’d have to be a ham-fisted buffoon to get in trouble with one of these off-road. 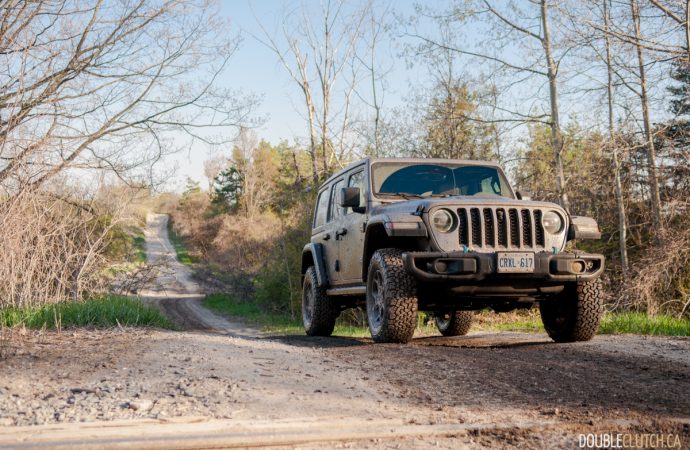 Visually, it’s almost impossible to tell the Wrangler 4xe apart from its non-PHEV siblings. Our Rubicon tester featured blue tow hooks, blue-outlined Rubicon graphics, a 4xe badge, the charge port up front – and that’s about it. It’s the same story inside; aside from a slightly reconfigured gauge cluster, an indicator on the dashboard telling you about the charging status, and a back seat that’s been slightly raised to accommodate the battery pack, the rest of the interior is identical to “regular” Wranglers.

The cheapest way to get into a Wrangler 4xe is to opt for the $54,495 Unlimited Sahara, while the High Altitude and Rubicon almost touch the $60,000 mark. Our particular Rubicon tester will run you about $75,000 as-tested; it’s hardly pocket change, but depending on where you live in the Great White North, you do have access to various provincial and federal incentives to offset some of the costs. Still, if you insist on saving fuel while subjecting yourself to the perks (and perils) of Wrangler ownership – and you don’t have easy access to an EV charger – an EcoDiesel model might be a better fit. 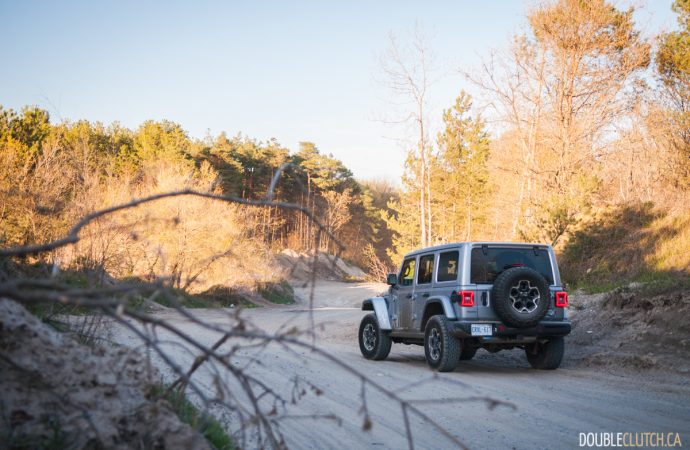 But with these things, it’s not always about dollars and cents. See, when you walk out of a Jeep dealership with the keys to a Wrangler, something strange happens. You haven’t bought a vehicle in the traditional sense, but rather, you’ve bought into a club and there are rules. You’re now obliged to throw up a peace sign at other Wranglers (and Gladiators) you see on the road; installing an angry-looking aftermarket grille, a lift kit, and super-aggressive off-road tires are rites of passage; it’s now your duty to park beside other Wranglers and leave rubber ducks on their trucks.

And if the perfectly imperfect 2021 Jeep Wrangler 4xe is what we need to keep that sense of community alive, so be it. Not everything has to make sense.