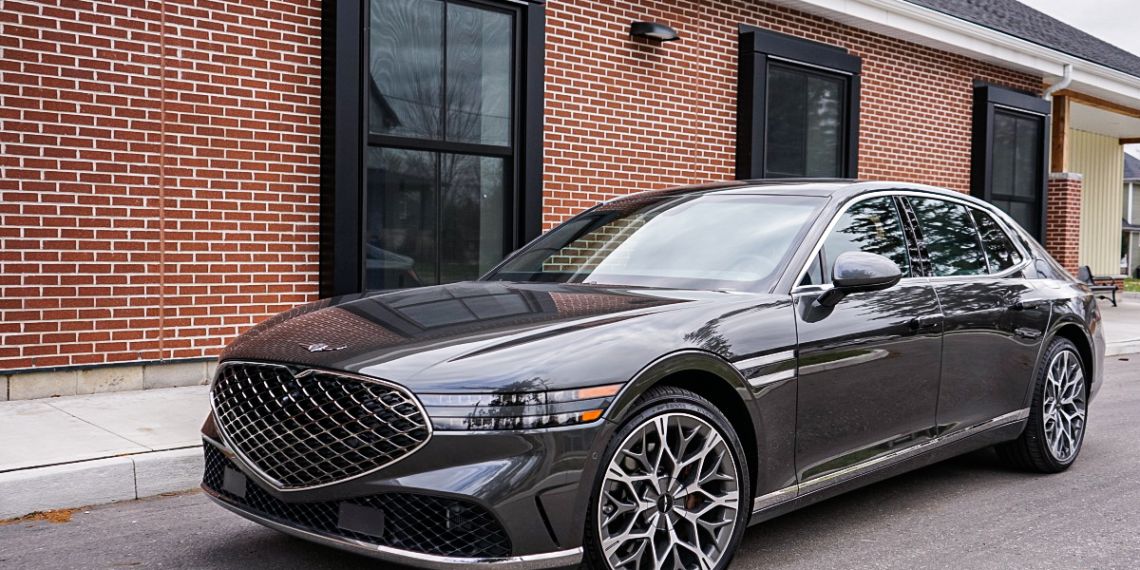 When it comes time to making a flagship luxury sedan, luxury automaker Genesis takes a vastly different approach than the typical German manufacturers. While the companies from Germany focus on surrounding drivers with latest technology and performance goodies, Genesis instead focuses on providing maximum comfort for passengers, especially the VIPs in the back. We borrowed the keys to the all-new 2023 Genesis G90 Prestige to experience luxury done a little differently.

When compared to the outgoing generation, the new G90 now looks more sophisticated and offers a much more distinctive curb appeal. The oversized crest front grille, clamshell hood, and slim two-line headlights set the tone that this is unlike anything else on the road today and we love that the G90 oozes a presence worthy of a flagship title which was a key element missing in previous models. 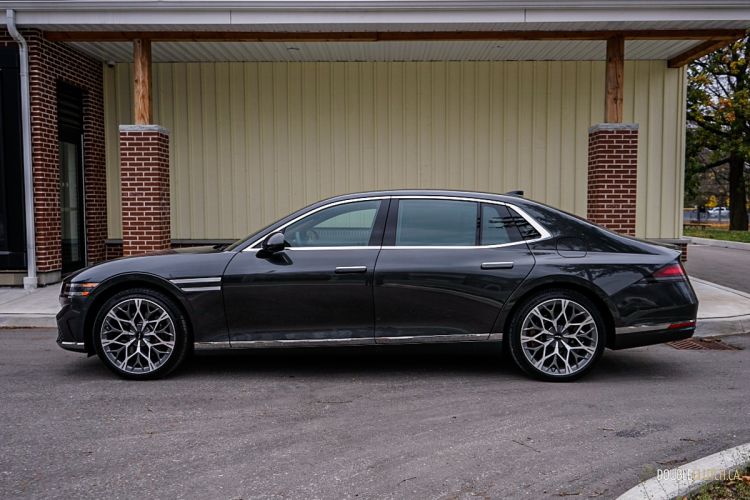 If the exterior design is not convincing enough, just grab the door handles that automatically pop out as you approach the vehicle. You will be welcomed to an interior design that would not be mistaken as anything other than the world’s best luxo-barges. The power-operated doors can be automatically closed with a touch of the numerous buttons that are conveniently located throughout the cabin. This was a smash hit for everyone who saw this vehicle up close all week and sets the tone for rest of the experience.

Materials are top-notch – the Nappa leather is silky smooth, every knob and dial feels substantial, and though we thought the Forged Carbon Metal accent trim pattern looked a bit out of place in a luxury car like this, we appreciate the extra touches with the G-Matrix pattern crafted on top for extra flair. The G90 is also equipped with a fragrance system, a first for Genesis, that automatically dispenses one of three preselected scents through the use of replaceable cartridges located inside the glovebox. 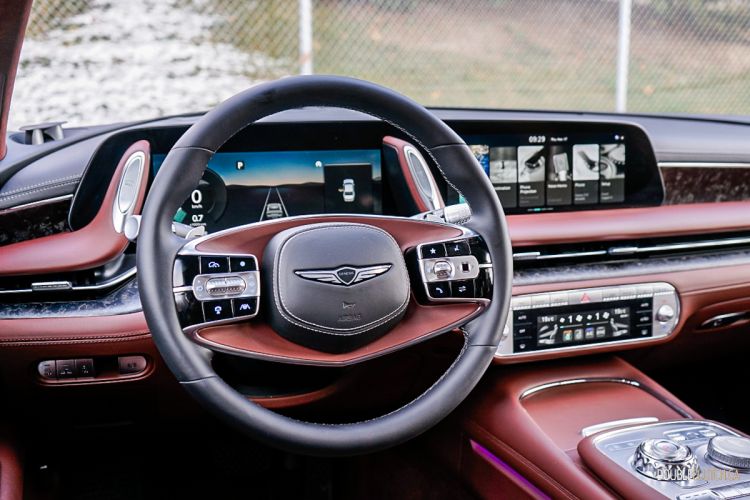 The star of the show in the new G90 is the incredibly comfortable seats. The front seats are supported by air cells for enhanced comfort and support, and come with standard massaging functions that are above-average in strength and intensity. We also love that Genesis had incorporated speakers in the driver’s seat headrest for guiding and warning sounds so these unwanted noises can be isolated from passengers. The rear passenger seats are even more impressive – they can be individually reclined, are well cushioned, and are heated and ventilated.

The rear right seat, aka the VIP seat, features a new powered footrest for a full first-class experience that was a real party favourite for everyone we chauffeured. Features such as the climate control, seat position, massage settings, curtain positions, sound system, and lighting adjustments can be controlled using the eight-inch touchscreen located in the rear center armrest, and there is an additional wireless charging pad on top of the two USB-C charging ports located in the back to keep every device powered. 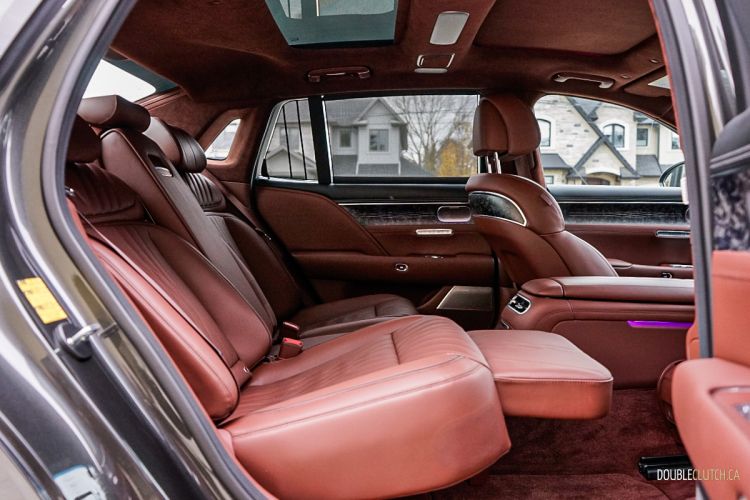 One notable change in the new G90 is the use of the 3.5-litre turbocharged V6 engine in place of the silky 5.0-litre V8 in the outgoing model. While we mourn the loss of another V8 engine from the automotive landscape, the replacement is actually quite capable and, in more ways than one, better. The turbocharged six-cylinder engine is supplemented by a 48-volt electric supercharger to deliver 409 horsepower at 5,800 RPM and more importantly, max torque of 405 lb-ft. arrives as early as 1,300 RPM.

Thanks to the punchy low-end torque, the G90 feels livelier than the outgoing model especially when getting off the line, and it manages to keep up the surge until you are way past legal city speeds. We do miss the V8’s creamy smoothness at cruising speed but the new turbocharged engine makes up for it with its responsiveness and there is hardly any turbo lag thanks to the electric supercharger providing instantaneous power. Power delivery aside, the primary reason behind this powertrain switch is for improved fuel economy and our observed 12.7L/100km fuel economy is considerably better than what we noted in the outgoing model. 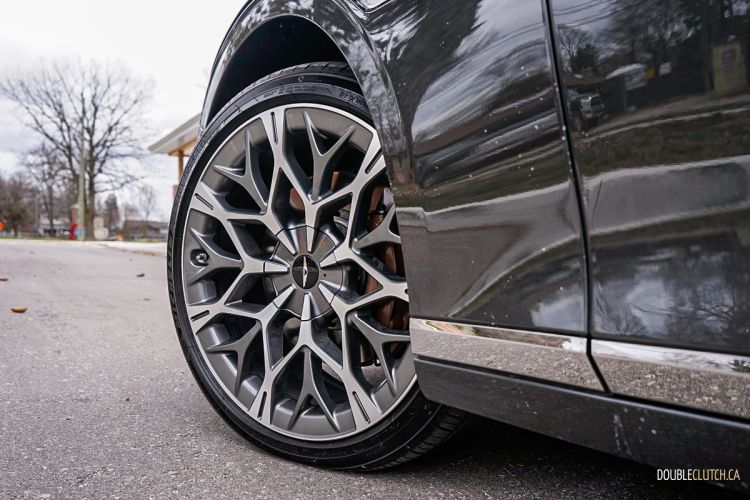 Handling for a full-size luxury sedan can often be a hit or miss but fortunately the Genesis G90 manages that just fine. You feel in control at all times and the rear wheel steering system helped sharpen its cornering skills as well as tightening up its turning radius. Don’t expect a sporty drive like you would in a BMW 7-series, but the Genesis G90 is more responsive than a typical limousine would of its size and the driver’s seat is by no means a penalty box.

As expected, ride is incredibly comfortable thanks to the Multi Chamber air suspension system that self adjusts its damping and height for enhanced stability based on traveling speed as well as data fed from its front camera and navigation system. The system even manages to elevate the front wheels when its sensors detect it is traveling downhill to ensure a stable ride, and to protect its undercarriage from contacting the road surface. 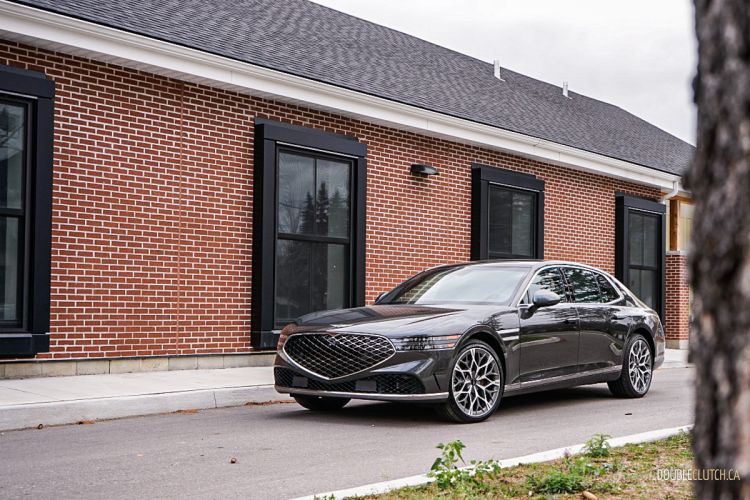 Pricing for the 2023 Genesis G90 Prestige is set at $115,000, which is eye-watering when you consider the 2020 model we last reviewed had only cost $89,750. However, the second generation G90 has taken such a huge leap of improvement that it feels a class above the last generation, and manages to hold its own against its main rivals – the Lexus LS 500, Audi A8, and the BMW 7-Series.

When compared to other full-size luxury sedans where the best seat in the house is often the one for the driver, the 2023 Genesis G90 Prestige is a refreshing change of pace for those who prefer to be driven or for owners who prioritize passenger comfort over sheer driving dynamics and fancy electronic gadgets. It is also a deviation from the last generation’s value-oriented approach, and time will tell whether North American buyers will accept this new way of luxury.