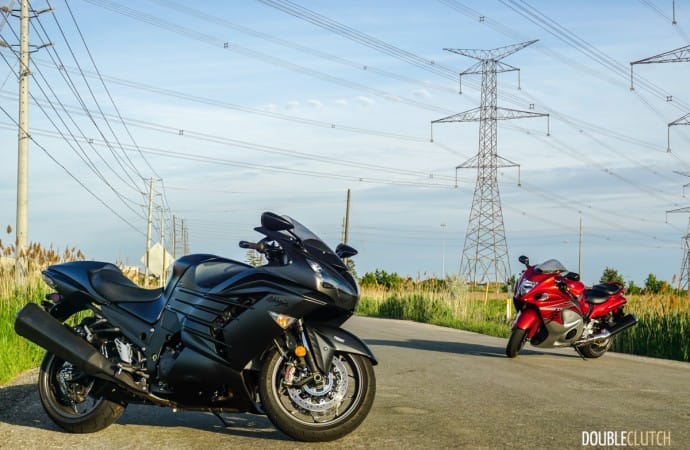 My childhood fantasy bike and its competitor, head-to-head.

I had a dream garage as a child; a red Dodge Viper with white racing stripes, and a matte black, murdered-out Suzuki Hayabusa. It’s those vehicles that you spend your childhood daydreaming about: zipping around, turning heads, and going really, really fast. This job has graced me with the incredible opportunity to achieve these dreams. Perhaps not owning them, but at least booting around on them for a little while. Now these experiences of driving these vehicles you’ve so deeply romanticized in your head can go two ways; you either have a beautiful cathartic experience, or disappointment blooms inside you. 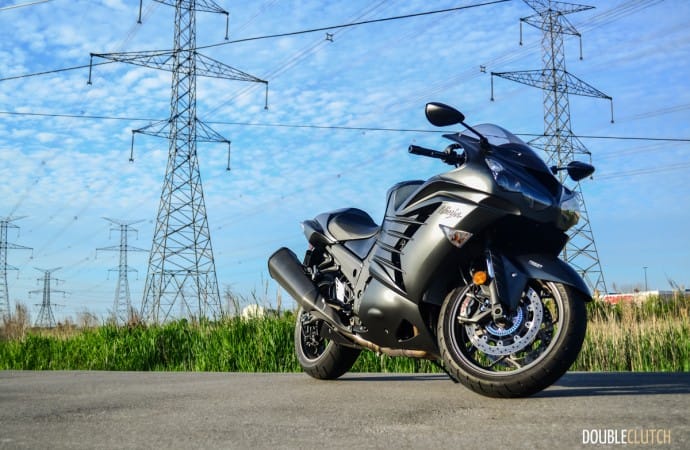 When my editor told me that we would be getting the 2016 Suzuki Hayabusa and the 2016 Kawasaki Ninja ZX-14R Special Edition, I was terribly excited: my childhood fantasy bike and its competitor, head-to-head. Prior to riding them, my thoughts were I would be blown away by the Hayabusa and underwhelmed by the ZX-14R. I was wrong.

I spent the first half of the week on the ZX-14R. The only word that can be used to describe this bike is ‘badass’. Kawasaki gave us the Special Edition in Metallic Matte Carbon Gray, as opposed to the standard Golden Blazed Green/Metallic Spark Black. It’s sexy. It’s bold. It’s huge. It’s so, so sexy. The fairings look like they have been clawed by a raptor, or perhaps – more appropriately – marked by a ninja. It is, after all, the King of Ninjas. 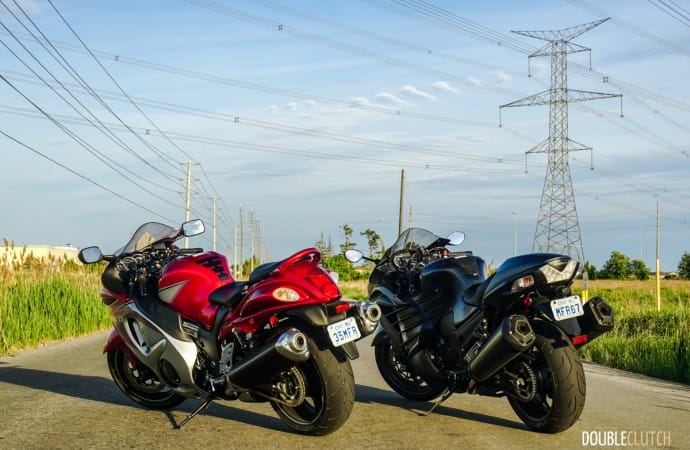 As a bit of a side note, after looking at the front for a while, I noticed it had an uncanny resemblance to Toothless from How to Train Your Dragon, the popular Disney film. Cute dragon, not so cute bike. It’s the front end that is reminiscent of this loveable character, and a quick animation of the headlights plays on the dash every time you start the bike. I thought this little animation was a nice touch, while others thought it unnecessary and tacky. The LCD dash is new on the ZX-14R. Flipping through the menus can be a little unintuitive, but once you figure it out, it’s intelligently mapped out and geared for the track.

It rides even better than you would expect it to. It’s a big, bulky bike, and you’d expect it to handle as such. My first few seconds on the bike proved me wrong: it’s dainty. The slightest of inputs in the handlebars will lean the ZX-14R with ease. Yet still, it’s not a terrifying experience. Power has never been so manageable. Throttle response is beautifully smooth and accurate. Opening it up feels comfortable and at no point does speed seem to become threatening. The bike stays planted during hard acceleration without any sort of hesitation. The front end refuses to rise; Kawasaki clearly designed this bike with the drag strip in mind. A wheelbase of 58.3 inches – shared by the Hayabusa as well – helps. 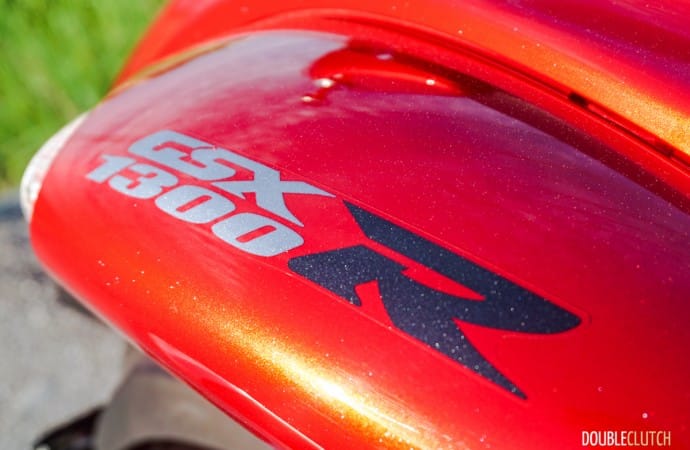 The amount of control the ZX-14R offers you as a rider is immense. Parts of the dream-like Kawasaki Ninja H2 have leaked over to the new ZX-14R, and the Special Edition comes with Brembo units similar to those on the H2. I have never ridden a motorcycle with better brake feel. Besides the use of stainless steel cables for the brakes and clutch, Kawasaki has equipped the ZX-14R with a brake lever calibrated by Brembo to remove any idle play from the lever. As soon as you touch the front brake, you get feedback, and that is exactly how it works.

The ZX-14R surprised me with how much I loved it. The Hayabusa was a surprise as well, but of a different nature. The first thing that threw me off was the seat once I straddled it. The ZX-14r has a wonderfully large seat that serves as a sort of hammock for your butt, and prevents it from sliding backwards under hard acceleration. The seat on the Hayabusa is like a large biscuit, it’s too hard and it feels out of place on a motorcycle. 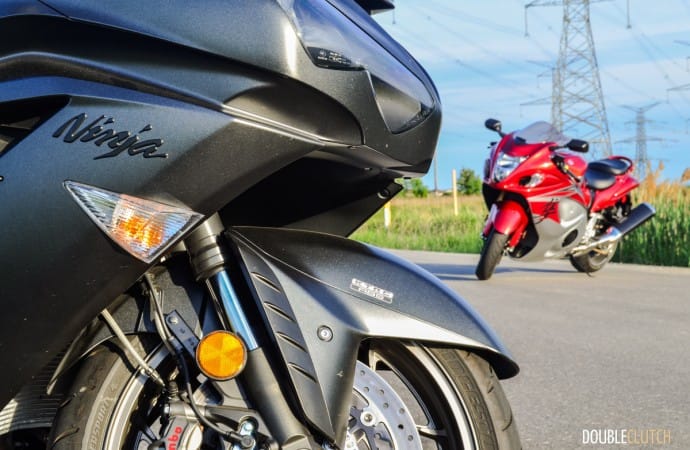 Furthermore, any acceleration will force your butt backwards in your seat. I found myself constantly adjusting my body position. The throttle felt choppy and unrefined as well, with high levels of vibration compared to the ZX-14R. Even the dash seemed overly cluttered and busy. It just felt like a cheap bike that could go really fast, a disappointing realization for me. Its younger brother, the GSX-R1000, is a much more impressive specimen. I was hoping for a more powerful, drag-oriented version of that. If I were faced with the choice of the ‘busa or the GSX-R1000 (reviewed here), I would definitely choose the GSX-R1000 and pocket the extra $400 for an exhaust upgrade.

The Hayabusa was built for the drag strip. The difference lies in the fact that it seems to have been built solely for the drag strip. A rider who is in full-tuck will be fully incorporated into the aerodynamic design of the Hayabusa. My knees fit very snugly into the tank, and the windshield was highly effective when I was in this position. The ZX-14R boasts the same qualities, but adds versatility with more impressive cornering feel and polish. The price difference is quite significant. Kawasaki’s ZX-14R is $1,600 more expensive at $17,999. Still, I would go for the King of Ninjas over the King of Speed. 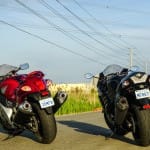 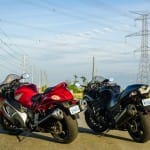 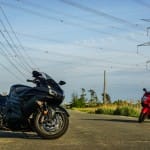 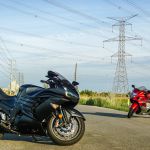 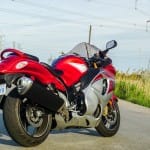 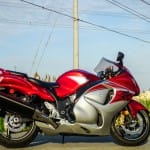 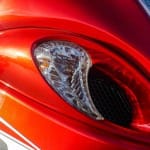 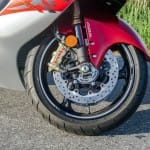 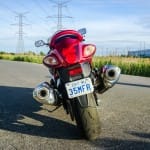 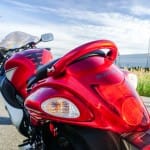 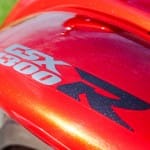 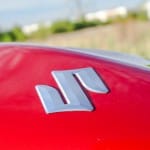 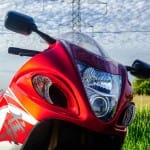 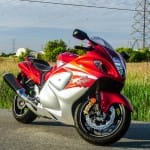 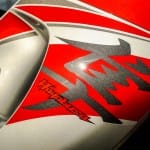 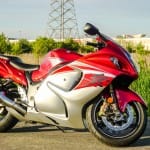 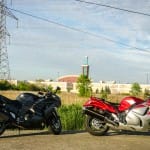 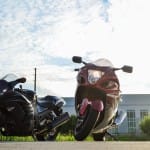 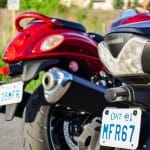 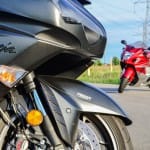 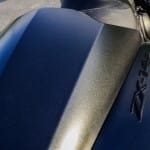 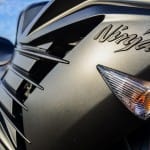 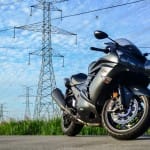 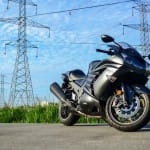 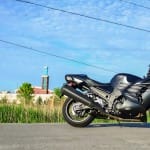