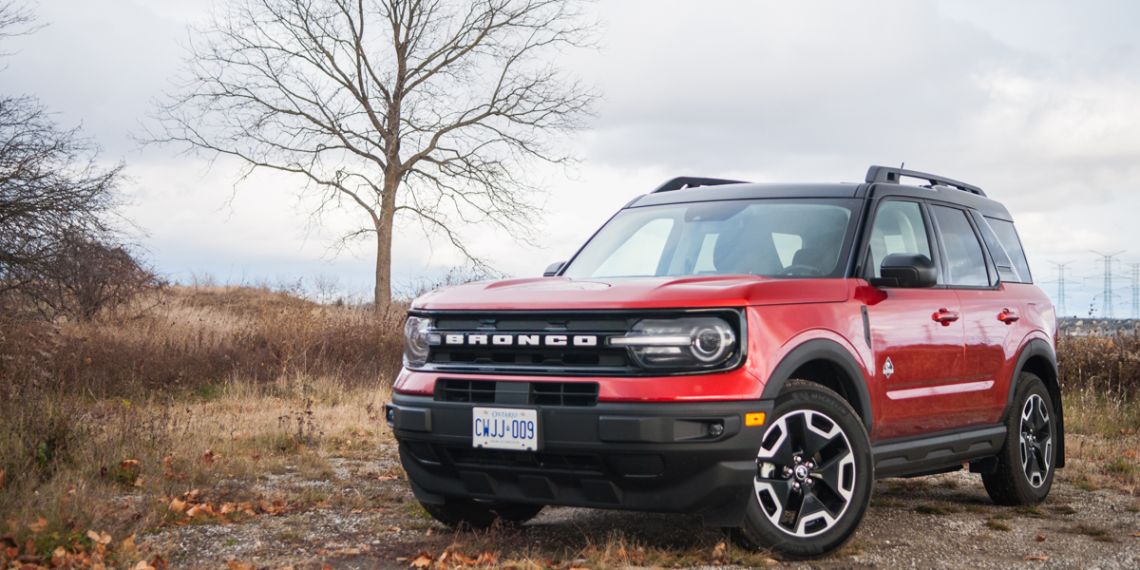 The 2023 Ford Bronco Sport Outer Banks is automotive athleisure. Even if you aren’t necessarily the active type, there’s nothing wrong with liking athleisure — yoga pants are comfy, trainers offer way more support than Chucks, and those super breathable workout shirts are great for working on your car on hot days.

And just like there’s nothing wrong with liking athleisure, there’s nothing wrong with liking the Bronco Sport. So what if it isn’t as capable as its hardcore, go-anywhere big brother? The Baby Bronco is nevertheless a comfy, stylish, and practical cute-ute that’s way easier to live with than the Big Bronco on a daily basis. You (probably) don’t hit the gym every day, just like you (probably) don’t hit the trails every day, anyway. 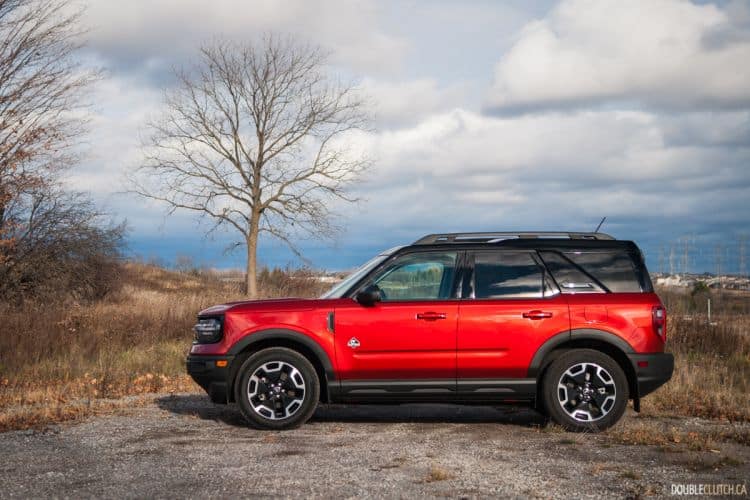 Beneath all the Bronco-ness, this thing is pretty much an Escape, sharing its underpinnings with Ford’s second best-seller. That means two powertrain options: the Base, Big Bend, and Outer Banks trims come with a 1.5-litre turbocharged three-cylinder engine, rated at 181 horsepower and 190 pound-feet of torque. If that’s not enough, the top-spec Badlands is powered by a more potent 2.0L turbo-four, putting out 245 hp and 270 lb-ft of torque. Regardless of the engine you choose, all-wheel-drive and an eight-speed automatic transmission are standard.

Frankly, there’s nothing sporty about the Bronco Sport, particularly with the 1.5L engine. Around town, there’s enough juice for the occasional stoplight drag race on your way to get groceries, but on the highway, the three-pot runs out of breath quickly and the soundtrack isn’t particularly pleasant when you floor it. Fortunately, the eight-speed automatic makes the most of it — it’s eager to downshift when you need to merge or pass, and it’ll happily fade into the background when you don’t. 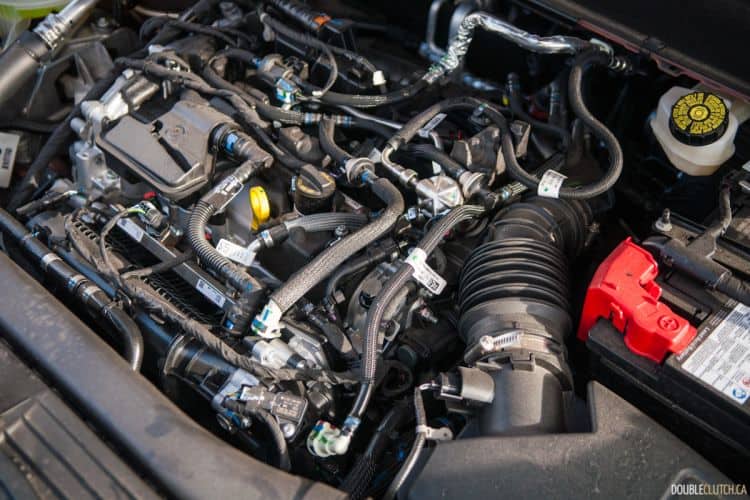 But expecting the Bronco Sport to drive like a Mustang is like expecting to run a marathon in hiking boots. Sure, the turbo-three isn’t exactly a powerhouse, the steering is light and numb, and there’s a bit of body roll when you take a corner too fast, but you know what? None of that matters in a mainstream cute-ute like the Bronco Sport — and the things that do matter are high points. Ride comfort is exemplary, with only the nastiest of bumps, potholes, and rough pavement getting past the long-travel suspension and squishy tire sidewalls. Wind and road noise are well-managed, especially compared to the lil’ Bronco’s big brother, which can be a chore to drive.

The Outer Banks’ 7.9 inches of ground clearance is a bonus, too. It’s not as generous as other off-road-ready CUVs like the Subaru Forester Wilderness or Mazda CX-50, but it’s more than most others in the segment, and more than enough for all the “off-roading” you’ll ever do. For an AWD crossover, fuel economy is commendable. With the base turbo-three, the Baby Bronco is officially rated at 9.3 L/100 km in the city, 8.4 on the highway, and 8.9 combined. We averaged 8.7 L/100 km after a fairly even split of city and highway driving — appreciably lower than the 11.4 we squeezed out of the Badlands earlier this year. 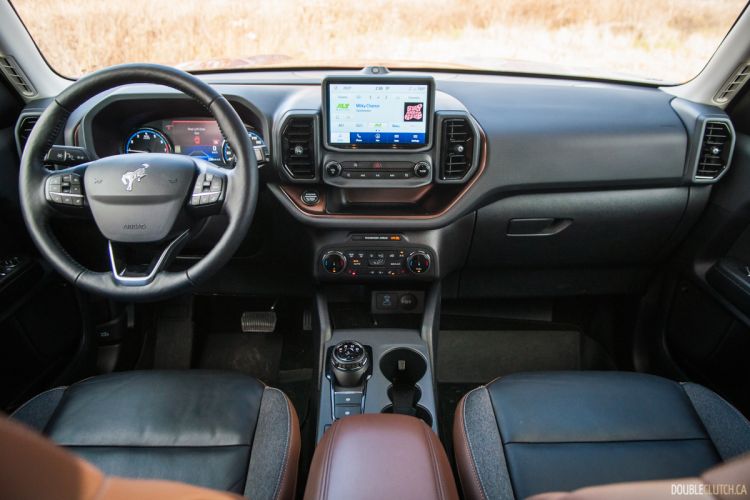 Style-wise, it’s easy to turn up your nose at the Bronco Sport because it isn’t a “real” Bronco, but when you view it against pretty much anything else in the compact crossover segment, it’s actually rather distinctive. Where the Escape on which it’s based is basically an egg on wheels, the Bronco Sport stands out with a boxy silhouette, in-your-face white badging, and retro touches like the round headlights and angled C-pillar, which are throwbacks to the original Bronco. Plus, touches like the two-tone paintwork and bright colour palette are the icing on the cake — you can’t get a yellow CR-V!

Inside, the Bronco Sport is strongly influenced by its big brother, but it manages to feel a little more upscale — understandable since the little one targets a different audience. Visibility and especially excellent thanks to the massive and upright windows, the infotainment is easy to use, and there’s no shortage of physical buttons and knobs controlling basic functions. The Bronco Sport is reasonably roomy, too. There’s a lot of headroom especially in the back, thanks to the tall roof line, but legroom can be tight for adults in the back. 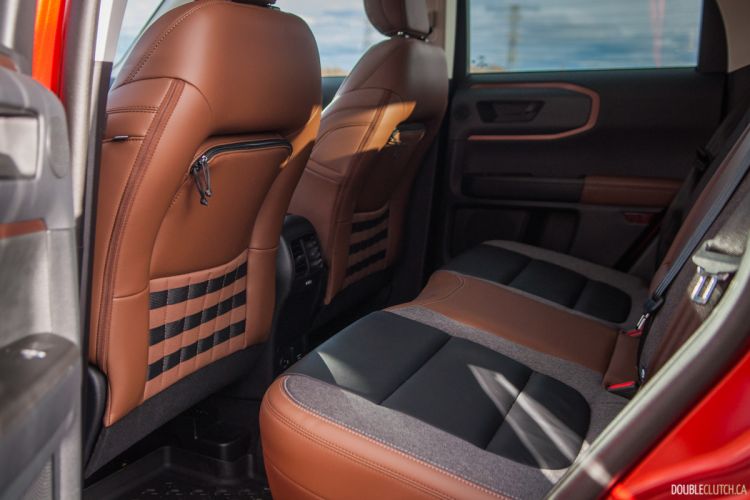 Cargo space punches in at 920 litres with the seats up and 1,846 with them stowed, but the Bronco Sport packs many tricks up its sleeve: the glass can flip out independent of the hatch, the floor and seat backs are all rubber, and there’s a nifty cargo floor (a $225 option) that also serves as a second-level for the cargo floor, and slides out and converts into a picnic table, among many others. The Bronco is chock-a-block full of practical touches.

But there is one user experience blunder to the Bronco Sport that is totally beyond comprehension. When the engine is running and you’re in park, you can lock and unlock the doors via the key fob. Now, this sounds pretty inconsequential — but when you’re rifling through your camera bag in the back seat, then toss the key into the cupholder, it knocks the lock button, and you don’t realize you locked yourself out until it’s too late, it can be a bit of a hassle. Now imagine the inconvenience when you’re stuck in the boonies with the engine running, the key staring up at you from the cupholder, and your phone happily juicing up in the wireless charger. Fortunately, the kind gentleman across the street let me use his phone. 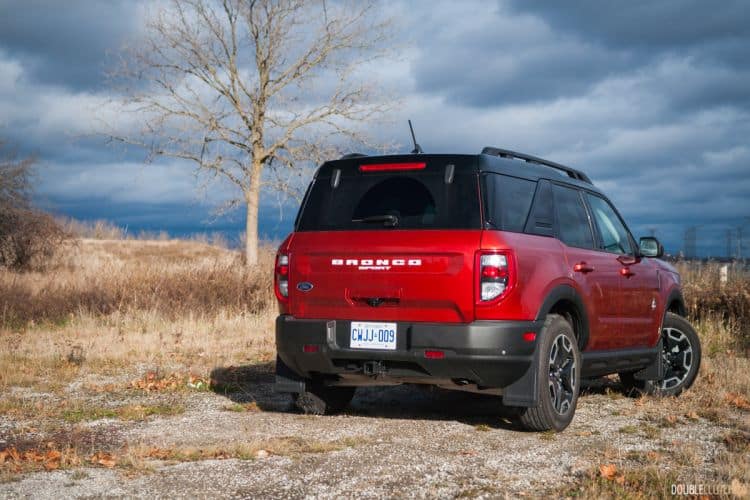 Price-wise, the Bronco Sport starts at $35,999 for the Base and runs all the way up to $46,149 for the Badlands. Our Outer Banks tester sits in the middle at $42,899, plus $600 for fancy red paint, $1,250 and $1,745 for the Ford CoPilot 360 Assist and Tech packages, respectively, plus $900 for the power moonroof, and $225 for the aforementioned nifty cargo table, bringing the grand total up to $47,619 before fees, taxes, and whatnot. The Bronco Sport is decent value — that’s pricier than the Forester Wilderness, but in line with the stylish yet slightly less capable Mazda CX-50.

Ford’s reborn Bronco was a long time coming, but what we didn’t expect was its little brother to be so agreeable. Don’t think of the 2023 Ford Bronco Sport Outer Banks as the “lame” Bronco. Instead, think of it as a better Escape: it’s more practical, more capable, and in our eyes, looks way cooler. There’s no shame in liking the lil’ Bronco, just like there’s no shame in lounging around the house all day in gym shorts.