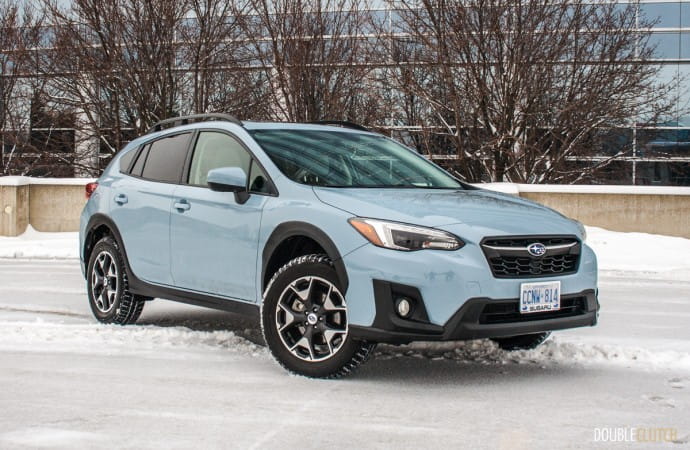 An extremely well put together car that has plenty of functional space and great adverse-weather handling.

As someone who’s never owned an all-wheel-drive vehicle before, I was quite delighted to learn that I would have the 2018 Subaru Crosstrek Sport with a six-speed manual for an alleged ‘snowmageddon’ week. While I have never gotten stuck in either front-drive or rear-drive vehicles, as a high performance driving instructor, I am well aware of the advantages and disadvantages of having all four wheels trying to put power down. What’s particularly important to point out is that the lovely Cool Grey Khaki Crosstrek came equipped with Bridgestone Blizzak winter tires all around. This would definitely be a fun week to really play around with the famous Subaru Symmetrical all-wheel-drive. 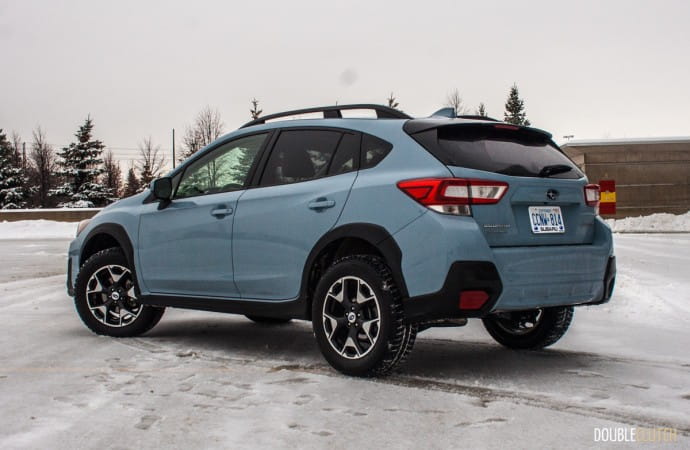 Subaru and its brand fanatics have cultivated a very function-over-form persona behind their vehicles ,and the Crosstrek works extremely well in that regard as a subcompact crossover. Compared to its competition like the Mazda CX-3 (reviewed here), Honda HR-V, and the Buick Encore, the Crosstrek follows Subaru’s principal design that (almost) all their vehicles come with all-wheel drive standard. What this means is that you’re not getting a Frankenstein’ed compact car chassis that has to be re-sorted to accommodate the room needed for the drivetrain – but instead a car that’s already designed for it in mind. While the Crosstrek is based off the Impreza (reviewed here) platform, it isn’t a compromised version of that car in terms of space.

Compared to its design, the Crosstrek rides considerably higher than the Impreza but getting in and out of it still requires a slight falling into; which is slightly surprising but still easy. The sport cloth seats look bland but are wonderfully supportive without being overly aggressive. Once seated, it is quite easy to find your seating position through the use of six-way power adjustments without compromising your speedometer or tachometer view too badly (a common issue plaguing most cars of this size). Shoulder checks can be somewhat frustrating as the C-pillar is quick thick but thankfully, Subaru’s blind spot detection comes with this package and will assist quite well. 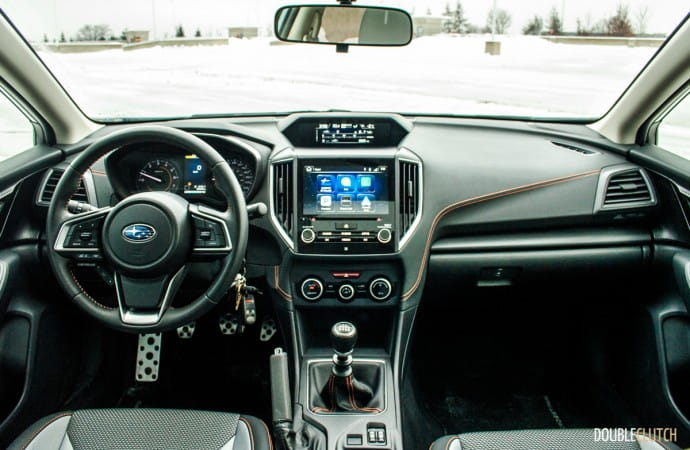 For those who want a large-feeling vehicle without necessarily getting a large vehicle, the Crosstrek really wins the category. The road presence feels great as it seems to occupy a good chunk of height and width of the lane without necessarily bulging over. In fact, compared to the Impreza, the Crosstrek seems to have commanding view and girth to announce to nearby traffic that you are there. The large 17″ wheels and slightly exaggerated wheel wells enhance this visual effect and will make it look bigger than it actually is.

The six-speed manual transmission still retains the Subaru notchiness its fans have come to love and enjoy. The gear selection process feels natural albeit slightly rubbery. One thing that I never quite got ahold of was how the leftmost row (for first and second gear) always seemed to feel like it wasn’t as close to the driver as I thought it should. When in first, it almost felt like I was in third and took me a double take once in a while to make sure I wasn’t going to lug or stall the vehicle. The shifter itself is comfortable and recognizable as the defacto knob, shift boot and shaft from any other Subaru. Clutch actuation is slightly numb and the catch point is higher than expected but it’s nothing that a few days of practice won’t help you get over. 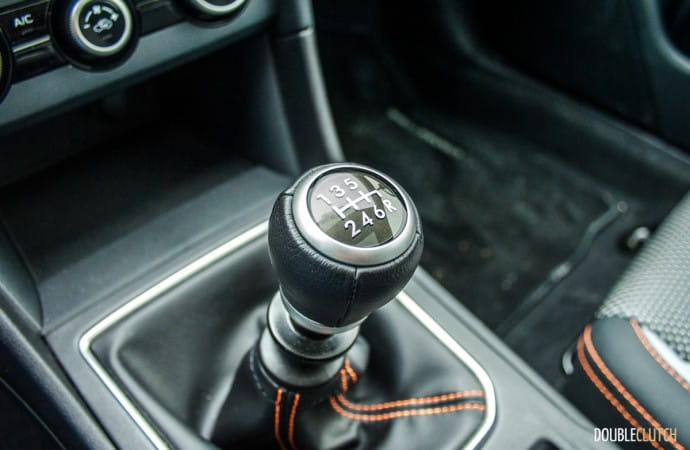 However, the one thing I must point out is that the amount of rev hang makes the enthusiast in me advise towards the Lineartronic CVT version. I appreciate the fact that Subaru still offers the manual on this model, but the issue is that when you clutch in and lift off the throttle to shift, the engine should follow suit. Instead, one can expect as much as a 500RPM hang when this happens. This means a crisp, smooth and quick shift is but an impossibility. Instead, you’re likely to have to lift off the accelerator first and wait a split second before clutching in and then shifting to burn off the extra RPMs.

That said, with the amount of snow we had during the test week, the Crosstrek threw itself around the highways, on-ramps, and city streets remarkably well and remained composed. The AWD coupled with the winter tires made for pulling out of less than ideal roads extremely easy in contrast to the other 2WD vehicles experiencing wheel spin all around me. That being said, AWD does not break the laws of physics, and braking or cornering still need to be approached with the same caution as a 2WD vehicle. It is highly likely the confidence you get from your ability to accelerate will lead to overconfidence in braking for turns. AWD merely helps you pull out of a stand but stopping is strictly a function of your tires and the road it sits on. You have been warned. 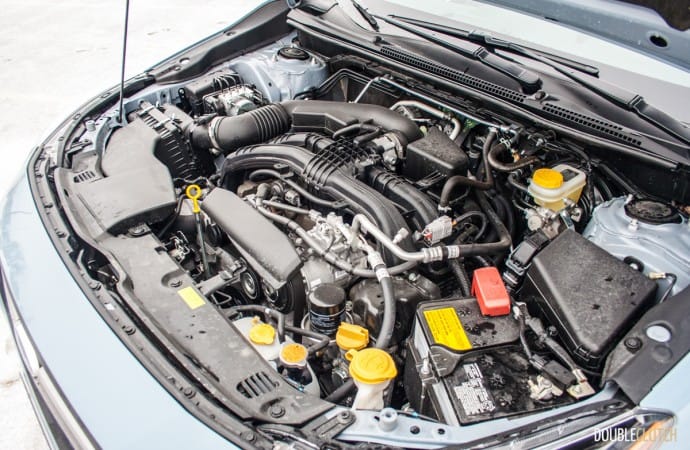 Fitted with a firm but pleasantly damped suspension, many passengers remarked at how well the Crosstrek drove all around Toronto even with the ridiculous pot holes we were encountering thanks to the thaw-freeze-thaw cycles this winter. The extra ride height was particularly useful when changing lanes and not having the front end plow through the little snow mounds that divide the lanes on the highway. The 2.0L horizontally-opposed four-cylinder pushing out 152 horsepower at 6,000RPM and 148 lb-ft. of torque at 4,000RPM feels very torquey. Even though peak horsepower supposedly comes on a the 6,000RPM mark, the car feels like it is straining its lungs to get there. A sports car this is not, but the juicy low end makes it feel quite capable.

Equipped with a staggered dual screen setup, an 8″ touchscreen and a smaller information screen right under the windshield, this Crosstrek is well equipped to dish out all the infotainment you need with Apple CarPlay, Android Auto and satellite radio baked right in. Nifty is the car’s ability to read out your incline angle and power distribution across all four wheels. The factory six-speaker system is quite adequate for any non-audiophile and there is a Harman/Kardon eight-speaker upgrade available. Scattered throughout are little pockets of storage space ranging from bottle holders in the doorside to slots in the console for phones or wallets. One particular point to note is that the elbow rest opens up for a decent cavern for all sorts of storage. Subaru has taken the time to notch out a passway so that your phone’s USB cable can pass through this without being pinched by the lid when you plug in the phone to the USB slot inside this box. Hats off for that one. 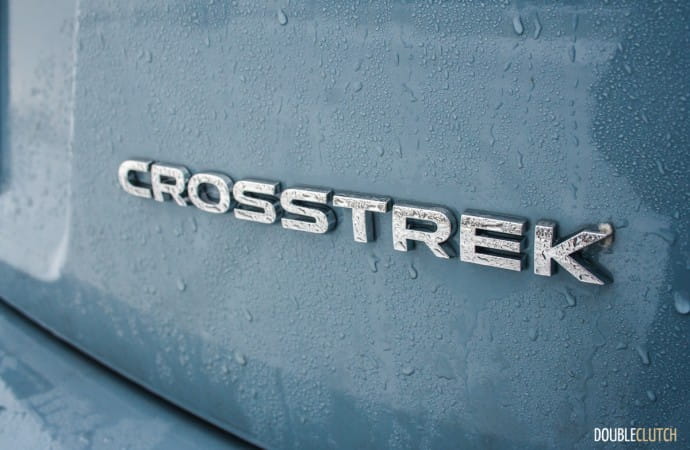 As the week ended with the Crosstrek, I was delighted to see that I managed a fuel economy of about 8.6L/100km of regular gas even with most of my seat time in the city and all in heavy snow. Subaru has officially declared number of 10.5 and 8.1L/100km (city/highway) so I’m fairly certain one can expect to meet or beat those numbers in good weather. The hatchback design allows one to store up to 588L of cargo with the rear seats up and a whopping 1,565L with the seats flattened. This puts the Crosstrek second best in class compared to the aforementioned CX-3 and HR-V, with the latter being the class leader with about 100L more in each configuration.

The 2018 Subaru Crosstrek Sport is an extremely well put together car that has plenty of functional space, great adverse-weather handling and is comfortable for long hauls. It’s no wonder their marketing material pictures the vehicle as a bunch of loveable dogs out to play in the mud. It may not be the leading edge in terms of looks but the combination of impressive capabilities should put this pug to the top of your list if you’re a small family looking to upsize from a compact vehicle. Well done Subaru. 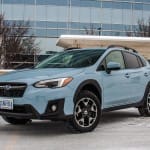 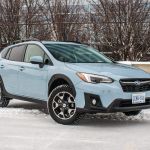 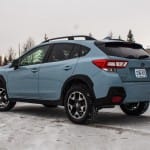 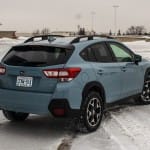 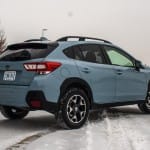 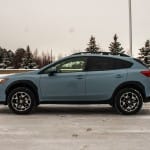 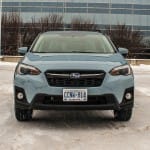 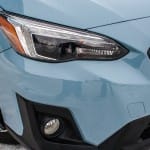 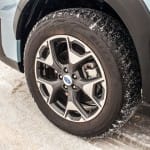 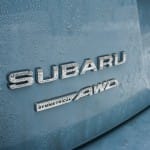 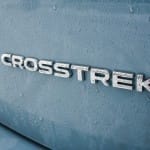 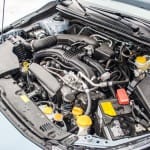 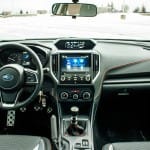 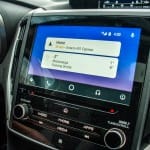 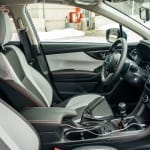 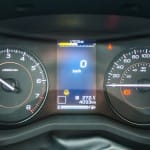 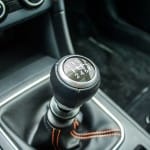 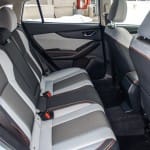 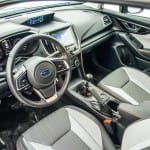 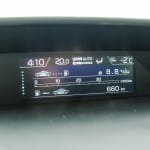