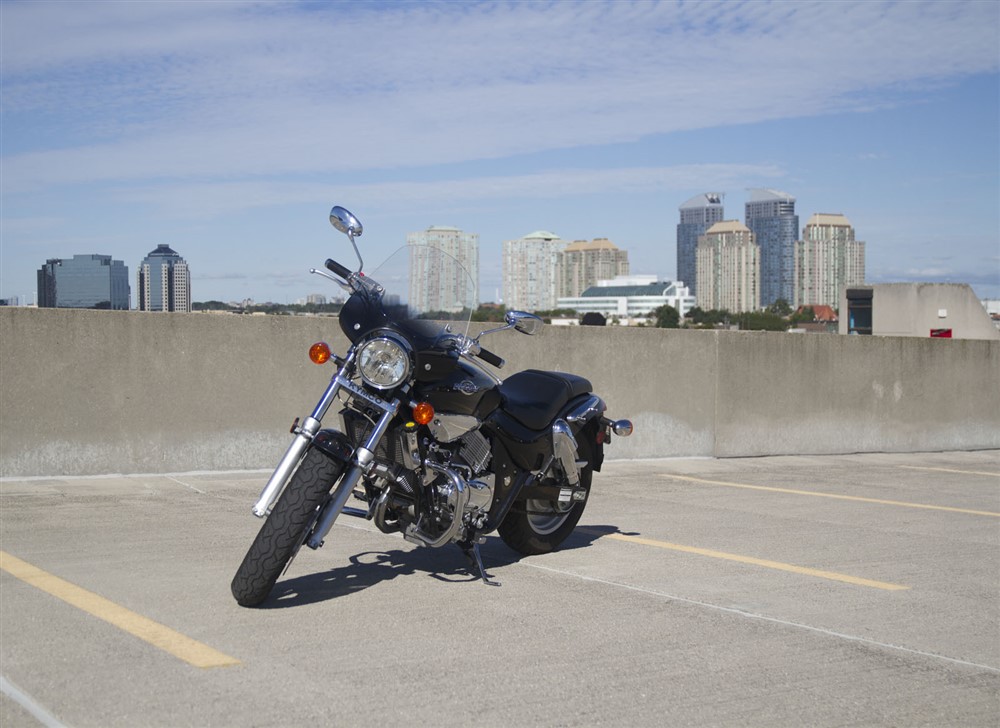 Gone, but not forgotten |

Hopping onto the navy blue Venox I was immediately met with a strange feeling.

Kwang Yang Motor Company, or Kymco, has been manufacturing Scooters, ATVs and Motorcycles since 1963. In 2005, BECO Motor International Incorporated became the sole importer and distributor of Kymco products to the Canadian Market. For almost 10 years Canadians have been offered a wide variety of displacement ranges, styles, colours, and features. Kymco aimed to offer more options to Canadian consumers, particularly in the scooter market, but for the last 9 years or so, what impact has Kymco made on the Canadian Motorcycle market? When I found out I was going to ride a 2009 Kymco Venox 250 for the week, I lacked an idea of what to expect and my curiosity forced me to perform a quick image search to see just what I had in store. After scrolling through the images I had to double-check my search query, did I mistakenly type in Harley-Davidson? No, the Kymco Venox 250 is a small cruiser with big cruiser looks. 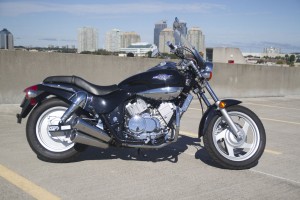 Hopping onto the navy blue Venox I was immediately met with a strange feeling. I was comfortable. The low cruiser-like seat height of only 28 inches and the low handlebars gave this Venox 250 a feel that is comparable to most cruisers, if not all cruisers. Although the Venox is the largest motorcycle Kymco produced, at 250cc the Venox is considered a lightweight cruiser. Coming in at 386 pounds I had no complaints with the maneuverability. Whether it is low-speed or high-speed cornering, the Venox was able to carve the road effortlessly. It astonished me how easy it was to handle considering the Venox has a wheelbase of 64 inches, which is comparable to a 500-700cc cruiser that is much heavier.

Starting the Venox 250 involves 4 steps and possibly 5 depending on if the bike is in gear or not. Thanks to the carbureted engine, pulling the choke while starting the bike was necessary, but thanks to the electric starter the V-twin fired right up every time with no drama. Below the seat sits the 250 cc engine that was designed by Kymco to create more power over the other 250’s. Most motorcycles in the 250cc class offer either a large single cylinder or an in-line two cylinder mill, the Venox’s engine is set in a 90 degree V-twin configuration. Further, unlike other motorcycles in its class, the venox has dual overhead cams rather than single, four valves per cylinder, and the engine is liquid cooled rather than air cooled. But is the Kymco Venox 250 trying to be something that it is not? Well, all of these features added on equate to the Venox offering 28 horsepower which is an average benefit of 10 horsepower over other 250 cruisers like the Honda Rebel and the Suzuki Marauder. 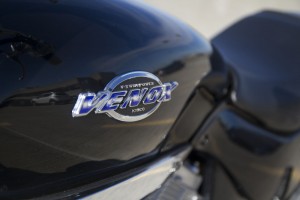 Throttle response on the Venox is smooth and harnessing that power with a 5-speed manual transmission harmonized with a light clutch proved to be great for both city and highway riding. One quirk I did notice at first was the lack of a tachometer, this caused me to shift early in the rev range fearing I would hit a 7,000 rpm redline and made the bike feel slow. When in reality, the Venox 250 has a 12,000 rpm redline with an added rev-limiter feature that prevents anyone from going any higher. Once I realized I had an extra 5,000 rpm to play with I was able to tap into that extra power, and the bike felt like it really came alive. Braking power did feel a little uninspiring with a single disk and dual piston caliper in the front and a drum brake in the rear which almost felt non-existent.

The Venox comes with a 14 litre tank which is almost a full 4 litres more than the competition; this gave the Venox an advantage when it comes to long range riding. The lack of a fuel gauge had me a little worried at first, but the low-fuel light was there and would alert me if I was tapping into the reserve portion of my fuel. On a full tank I was able to take the Venox 278 kilometres before the fuel light was lit, in a mix of city and highway riding which associated with a very good 4.1 L/100km rating. 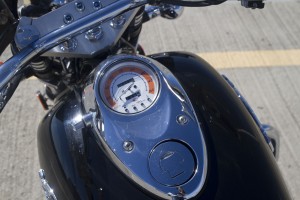 The Venox 250 is designed in the cruiser style with many of its features being borrowed from popular bikes made by other manufacturers. For example, the solid rear wheel is reminiscent of the Harley-Davidson V-Rod. The distinguishing trumpeted twin exhaust and the front wheel echo the same design feature used on the Honda Magna in the 80’s. I personally really enjoyed riding the streets of Downtown Toronto on my way home after picking up the Venox. While at a stop light, a man in a Mustang GT said “Nice bike! Is that a 600?” This gave me a bit of a chuckle as I replied with “It’s just a 250.” That seemed to be the general consensus among everyone that saw this motorcycle. They would overrate the cc’s by almost triple. The highest guess I got was 1300 CCs.

Because this is a 250, many beginners should opt for this motorcycle. Do not be scared off by its big cruiser looks, this bike is easy to ride and the low center of gravity gives it an edge of not feeling like it is going to topple over. An added feature that will help beginners is that the engine will not attempt to start while the bike is in gear. Also if the kickstand is put down while the engine is in gear the engine will automatically shut off. This puts beginners into the habit of always putting the bike into neutral before putting the kickstand down or starting the motorcycle. 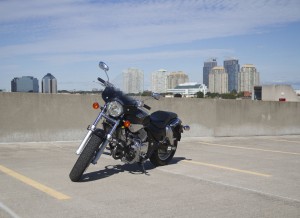 Unfortunately, Kymco no longer produces the Venox 250. This is saddening due to just how fun this bike was to ride. Production stopped in 2009 but this motorcycle’s styling will outlive its age. With the added power this Venox has to offer over other motorcycles in its class, it is the obvious choice for those that want a 250 they will never get bored of. The Venox 250 had an MSRP of $4,299 in 2009 but you should still expect to find one for around the same price if it is in good condition with low mileage. Personally, if I was not so in love with sport bikes I would purchase this motorcycle in a heartbeat. 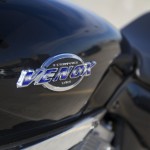 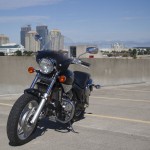 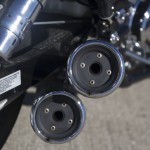 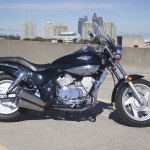 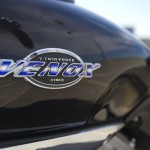 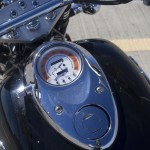 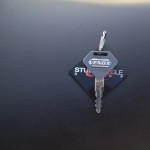 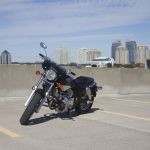