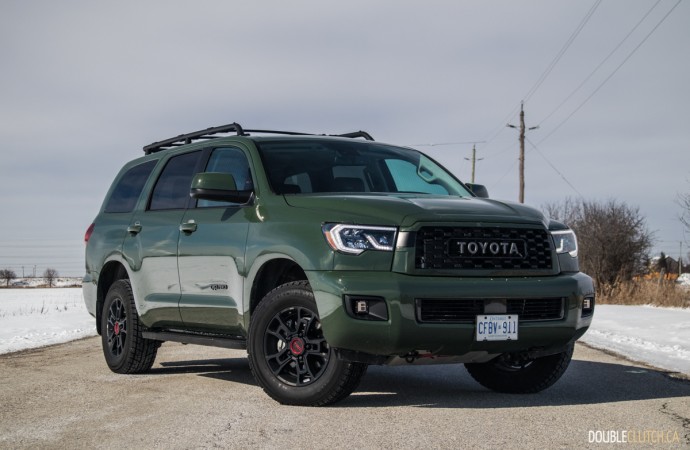 Regular readers have likely picked up on the fact that body-on-frame SUVs are a guilty pleasure of mine.

The concept of a comfortable family SUV that can tow, haul and work like a full-sized pickup truck is appealing as sort of an ultimate utility vehicle; all the utility you could want, with no compromise on passenger space or comfort. It’s a tall order, and GM’s full-sized SUVs have been the benchmark for quite some time now. The Toyota Sequoia is one entry into the segment with a new for 2020 TRD Pro package available. 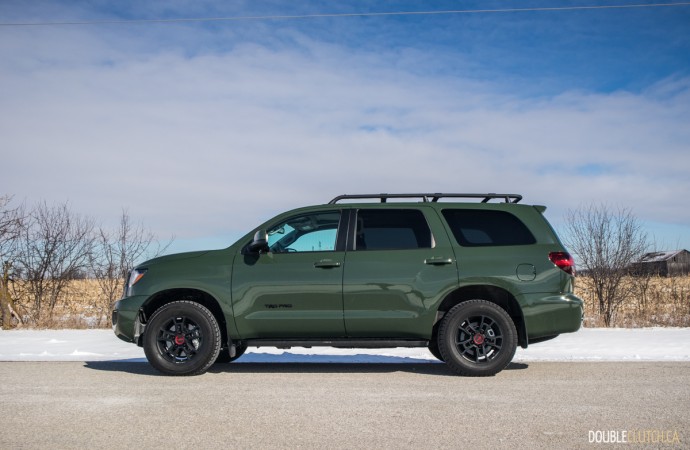 The Toyota Sequoia remains on its second generation Tundra-derived platform, originally introduced in 2008, and refreshed for the 2018 model year. Styling hasn’t changed much over the years, and in any other segment that would be an issue, but with these full-sized SUVs, styling trends haven’t changed much and the Sequoia still looks surprisingly fresh. A lot of this is due to Toyota’s small efforts to keep with the times with LED lighting, new wheel designs and paint. The TRD Pro package available on the entry SR5 model really gives the Sequoia a different look. In the signature Army Green, our tester looked ready for battle with a huge tube style roof rack, TRD skid-plates, TRD rock rails, heritage ‘TOYOTA” front grille, Rigid brand fog lamps, and BBS forged 18-inch alloy wheels.

The exterior of the Sequoia had me feeling pretty good about the week ahead, but those expectations fell pretty quickly once entering the big Toyota. Where the exterior has aged gracefully, the interior has just aged, and it shows just about everywhere. Hard black plastics with rough edges are abundant, fit and finish is well behind just about anything else in this price point, and controls such as the gear shifter and climate control knobs feel flimsy. The dash layout is simple and basic, which is good, but the ergonomics are a bit weird; having to lean forward and reach clear across the expansive dash to reach the radio tuner knob gets old, and same goes for the narrow storage tray with a lid that just clips into place. We also noted that about a third of the buttons are not backlit, which makes operating in the dark rather difficult if you’re not intimately familiar with the truck. 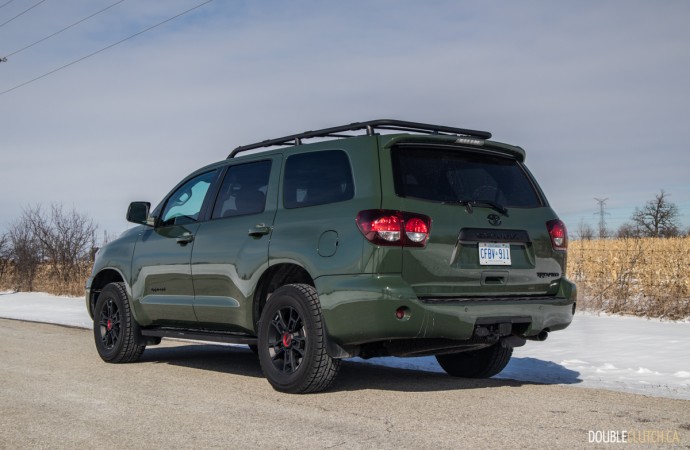 Low rent and drab atmosphere aside, the interior is functional with lots of storage up front, and seating for up to eight adults. Our tester came with second row captain chairs, which are adjustable and fold flat, as does the third row to reveal a massive cargo area. With some coaxing I was able to get a full 4×8 sheet of half-inch finish plywood into the truck with the rear hatch closed; and it was totally protected from the elements; something most pickup trucks could never do. Toyota has also updated the infotainment in the Sequoia to include Android Auto and Apple CarPlay, a very welcome addition.

All Sequoia models are powered by the time-tested and true 5.7-liter i-Force V8 which makes 381 horsepower and 401 lb-ft. of torque at 3,600RPM. The motor has been around in its current form for over a decade, and it’s known to be as reliable as an anvil. It also offers plenty of power to move the beastly truck around, and while not exactly playful, it has no issues making quick highway passes, and has plenty of power off the line. If there is anything to fault with the engine it’s that it does sound a little agricultural at idle, and there is a noticeable drone from the exhaust while at speed. I considered the noise part of the TRD Pro character, but it would be a distraction in one of the more luxury oriented trim levels. 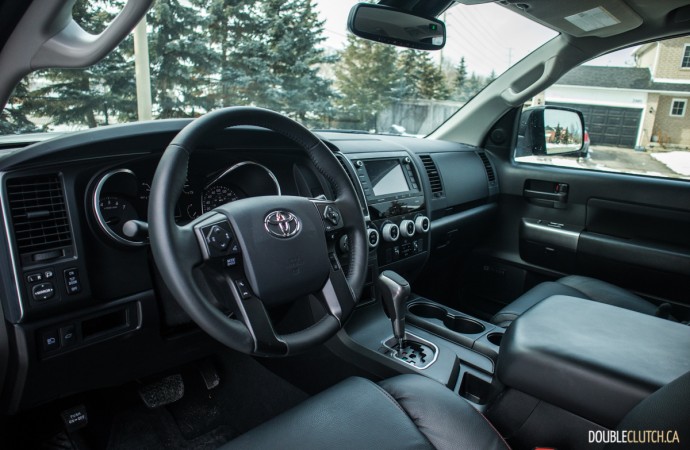 Power flows through a traditional six-speed automatic to the rear wheels, or all four via a one-touch four-wheel drive system with both 4LO and 4HI options. A lockable Torsen limited slip differential is also on board, giving the Sequoia some legitimate off-road cred. It’ll tow 7099 pounds too, if that’s your thing. Power and capability don’t come cheap, and while the Sequoia’s driveline may be proven reliable, it’s also behind the times in terms of efficiency. We averaged 15.3L/100km, or about 3L/100km worse than I typically get in a 5.3-liter equipped Chevrolet Suburban. One bright spot is that the Sequoia is happy on regular grade fuel.

From behind the wheel, the Sequoia also feels its age. Whereas more modern body-on-frame SUVs have managed to move well beyond the truck-like feel, and offer surprisingly refined luxurious driving experiences, the Sequoia remains true to its roots. It’s bouncy, the steering is vague and loose and the exhaust noise in the cabin removes any notion that this is a luxury vehicle. It’s not all bad; if you like the truck-like characteristics, it does have an amazingly tight turning radius, great visibility, and a nice commanding seating position. The TRD Pro package does add beefy 2.5-inch FOX Internal Bypass Shocks, which may be a contributing factor to the ride quality as they’re tuned for off-road use. 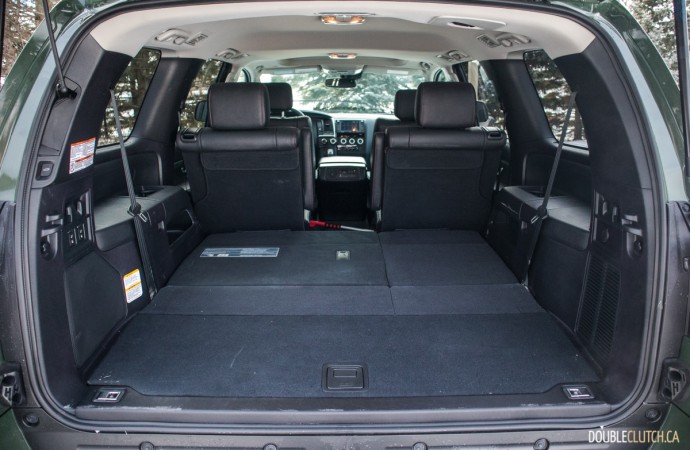 Speaking of the TRD Pro package; it’s only available on the basic SR5 model with a starting price of $63,290. The TRD Pro package adds an additional $15,660, bringing our as tested price to a costly $78,950. The package surely adds a very unique look with all the appearance and body protection goodies, plus a 14-speaker sound system, Toyota Connected Services system, and the FOX off-road shocks. Unless you really need the off-road gear, it’s a lot of money to ask for a truck with an interior as basic as they come, no heated steering wheel or any real comfort luxuries. The good news is that you can step up to the more refined Limited trim for less money at $69,790. Or for $78,790 (still less than the TRD Pro), the Platinum is available with cushy ventilated front seats and rear DVD entertainment.

If we forget about the wonky pricing on the TRD Pro package, it is a very unique way to dress up a truck like this, and right in line with the current trend towards overlanding, of which Toyota trucks get a lot of exposure. The Sequoia in itself is a good truck, if you ignore that the competition in the segment is beyond good. The fact is, there are not too many vehicles available today that can do everything the Sequoia does, and it’ll last forever. It certainly has plenty of faults, and would benefit from an update, but I suspect the Sequoia is a purchase one makes from the heart, and not because it’s the best gadget out there. 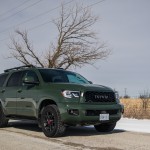 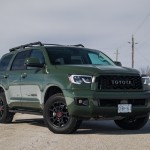 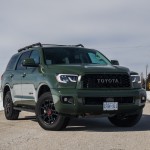 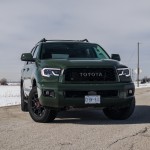 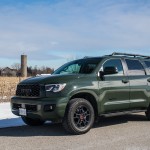 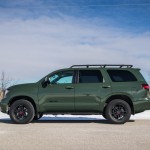 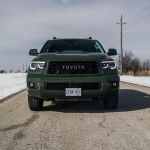 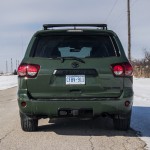 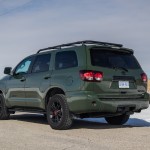 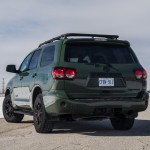 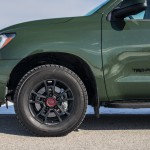 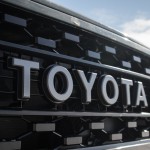 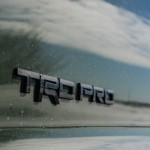 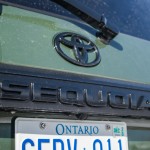 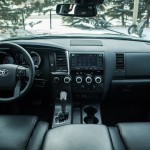 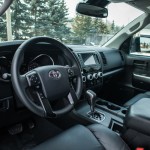 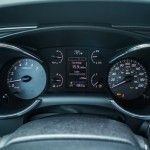 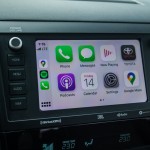 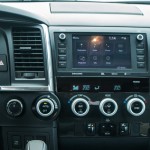 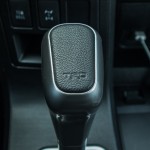 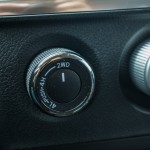 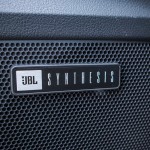 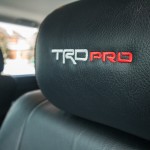 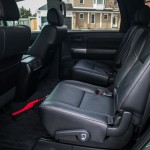 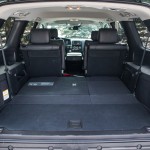