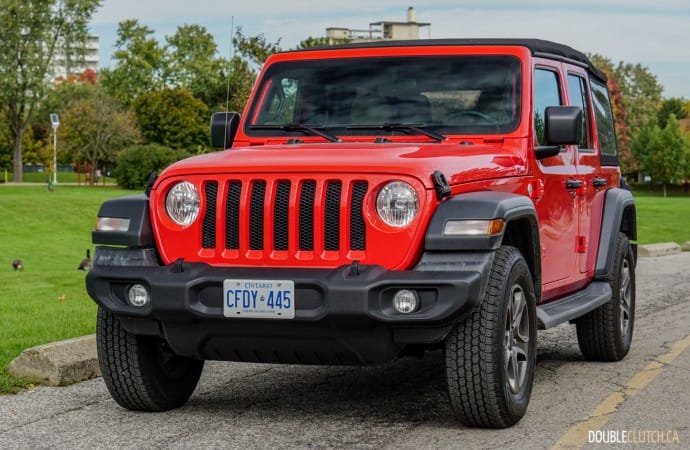 There is no more vehicle nameplate in today’s market that’s more iconic than “Jeep”.

Sure, the name is used for an entire brand, but the word on its own really means you’re talking about what is known today as the Jeep Wrangler. 2018 saw the launch of the latest-generation Wrangler, known as the JL – a careful, ground up redesign that needed to stay true to the iconic design. We find ourselves with a 2019 Jeep Wrangler Unlimited Sport S, the four-door version of the legendary off-roader, in a somewhat optioned-up base trim. 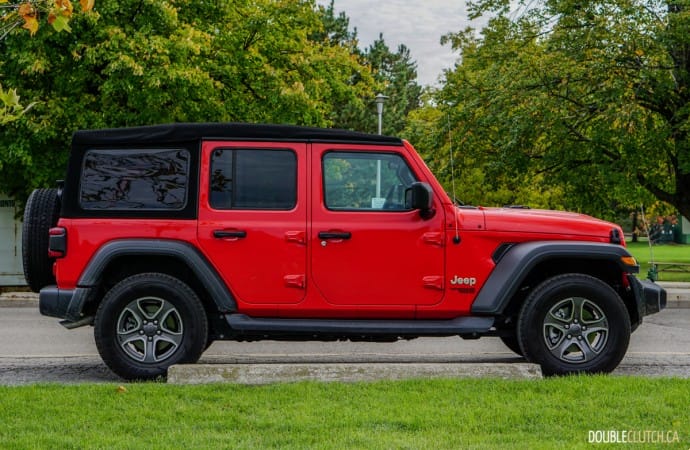 Trim level divisions on Wranglers have historically been pretty easy to understand where the line is drawn. The Sport is the bare-bones base model, with very few options and a mostly plastic interior. The Sahara trim is for the everyday driver that wants creature comforts and is willing to pay for it, with power-everything and higher end interior finishes. Lastly, the Rubicon is for the serious off-roader who needs extra wheel travel, sway bar disconnects, and tires that can take a licking.

The Sport ‘S’ therefore finds itself in a bit of a weird placement. On the two-door models the S adds some basics like vanity mirror lights, automatic headlights, powered and heated mirrors, power windows, keyless entry and an alarm system. On the Unlimited models, the S is the lowest trim available starting at $42,245. Available options can net up to a price tag that heavily overlaps with Sahara territory, which for the Unlimited starts at $45,995 – a sizeable price gap of $3,750. 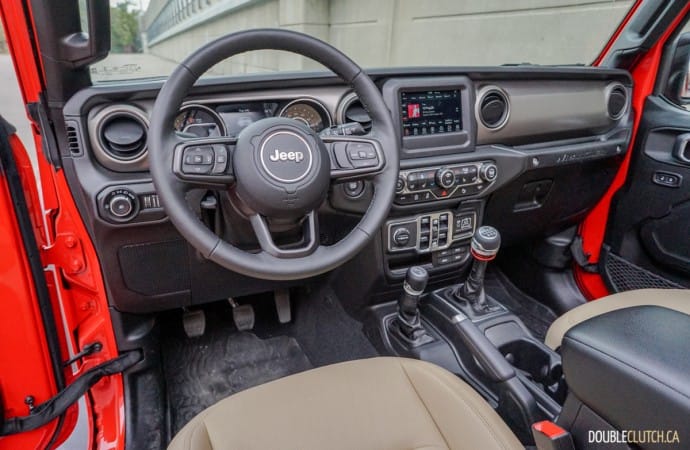 The Wrangler on test was equipped with the Technology Group ($995) that adds the 7” Uconnect screen, Android Auto/Apple Carplay, and automatic climate control. The Cold Weather Group ($895) adds a heated steering wheel and front seats along with remote start, while the SafetyTec Group ($895) adds LED taillights, parking sensors, park assist, and blind spot monitoring. 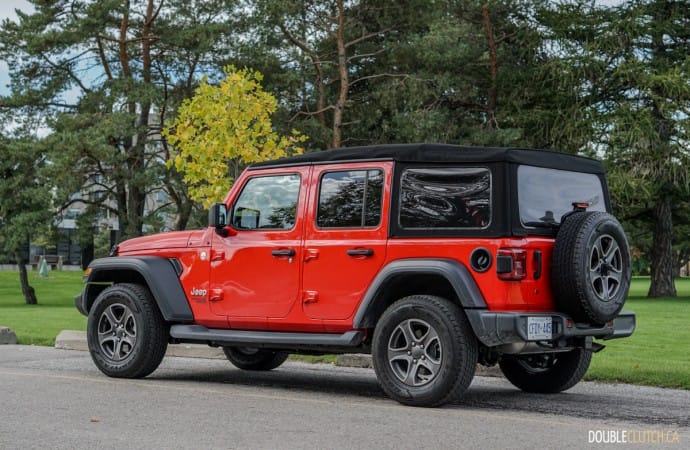 The basic interior of the Sport trim can be a bonus or a bane depending on why you want a Jeep. From the driver’s seat, the view is a clean plastic landscape with straightforward controls, and the easy to use infotainment screen bulging out in the middle. The plastic is easy to wipe down and marks left behind tell the story of all the adventures you went on. Rear seat passengers are treated to upright, but reasonably comfortable seats that are equally suitable for driving to the grocery store and barreling down a dirt road.

Standard on the Sport is the soft-top, which is pretty easy to use, and a nice redesign over previous generations. Popping open two latches up front and pushing up on the roof opens up both rows of seating to the sky. To get large items into the trunk, the rear window panel has a hard plastic bar that needs to be twisted out of place, and then some flaps get separated to allow the panel to flip out of the way. This is not a quick effort, so expect to be installing the hard top roof if you’re loading tall stuff in and out on a daily basis. 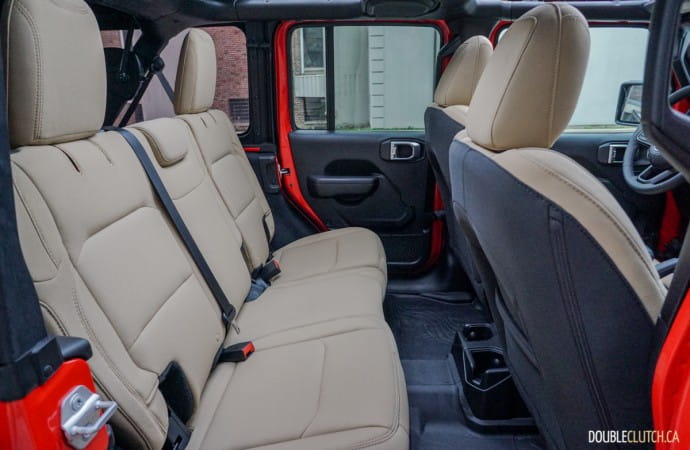 Seats come in either black or a tan colour, and are only available in cloth on the Sport trim, with leather seating only available on higher trims. With only a few thousand kilometers on the odometer on the test vehicle, the tan seats already looked tired; black is a good choice here.

Part of the campaign promise of the JL Wrangler was improved cargo space. However, the gains largely benefit the two-door Wrangler, where space was laughable in the previous generation (JK) with the second row in use. On the Unlimited tested here, cargo space is actually pretty decent, providing 2,050L of space with the seats folded flat, up 50L from JK. With the rear seats upright, cargo space is relatively unchanged at 892L (up from 890L on the JK. 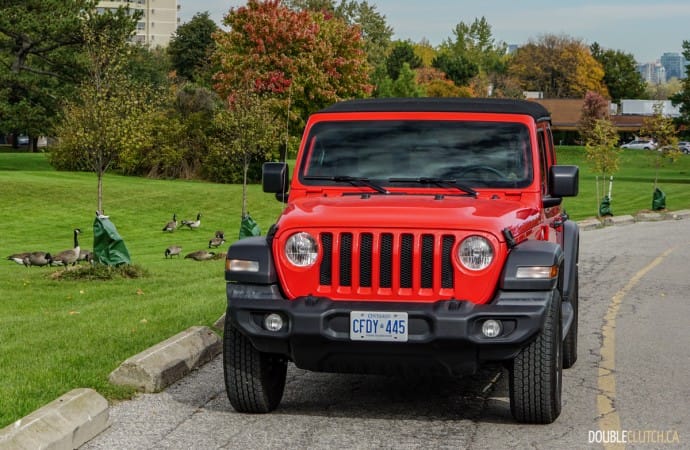 The 3.6L Pentastar engine is rated for 285 horsepower at 6,400 RPM, and 260 lb-ft. of torque at 4,800 RPM; unchanged from the only engine that has been available in the Wrangler since 2012. The big game changers in the JL’s powertrain are the transmissions and upcoming diesel engine. For those who like a manual transmission, the shifter in the JL’s six-speed box no longer bobbles around like a rag doll as it did in the JK, thanks to an entirely different transmission and gearbox nestled in the tunnel.

Gearing is still not ideal, at least with the 3.45 axle ratio on the Sport S. This gearing will render gears four through six untouched during until drivers get used to it and the more sluggish driving style. Don’t expect to be passing anyone on the highway without dropping down at least two gears if you are cruising in sixth. 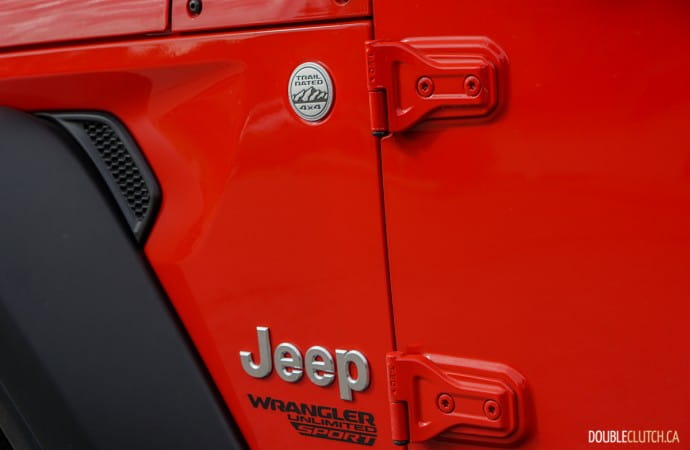 With the manual transmission, the JL is rated for 13.8L/100km city, 10.1L/100km highway and 12.2L/100km for a combined rating, which is a decent improvement over the JK’s combined rating of 13.3L/100km.  Opting for the eight-speed automatic will net more fuel economy gains, with the combined rating coming down another 0.5L/100km. If fuel economy is a big issue, then buyers will want to consider the 2.0L diesel engine that arrives late in the model year. The diesel should also come with a hefty uptick in low-end torque.

Driving a Wrangler is always a blast and unlike anything else, but the JL adds a refinement level to it that doesn’t come with as many compromises as the old JK did. Ride comfort, fuel economy, technology, and safety systems have all come a long way in the Jeep icon’s latest overhaul, having some of our colleagues questioning whether or not the Unlimited will eat into Grand Cherokee (reviewed here) sales.

If open top cruising and off-roading (or the idea of off-roading) are your jam, then the 2018 JL Wrangler Unlimited is a fantastic choice, as long as you are selective in what option packages you choose. Go for the Sahara trim if you plan on using the Jeep as a family vehicle, and for the hardcore off-roading experience, grab a Rubicon (reviewed here) and don’t look back. 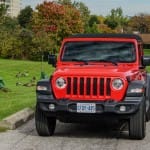 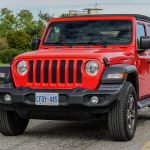 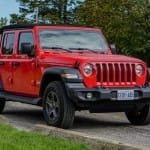 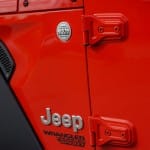 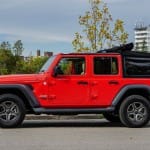 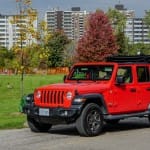 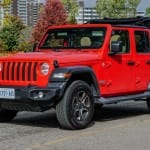 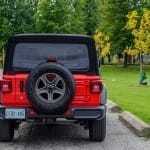 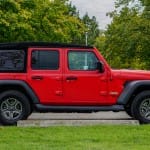 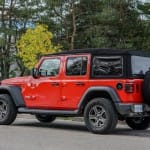 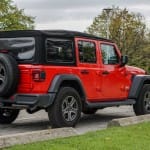 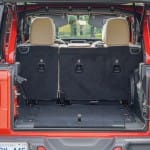 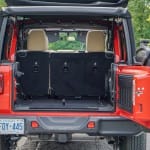 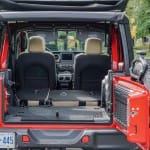 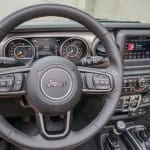 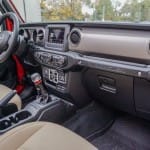 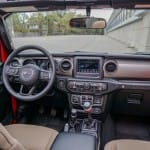 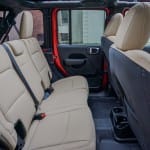 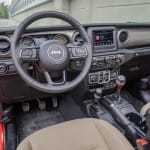 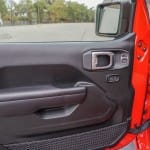