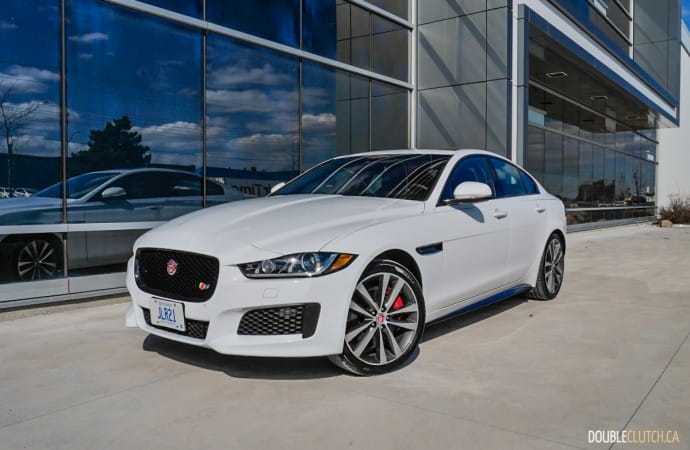 Imagine you’re in the market for a compact sports sedan; which car comes to mind? You’re likely to have thought of the BMW 340i xDrive, Audi S4 (reviewed here), or the Mercedes-AMG C 43. If you are looking for offerings outside of Germany, I am willing to bet that the Lexus IS 350 AWD, the Volvo S60 T6 AWD, or the Acura TLX would appear in your mental picture. Dig a little deeper and you might think of the Genesis G70 3.3T. 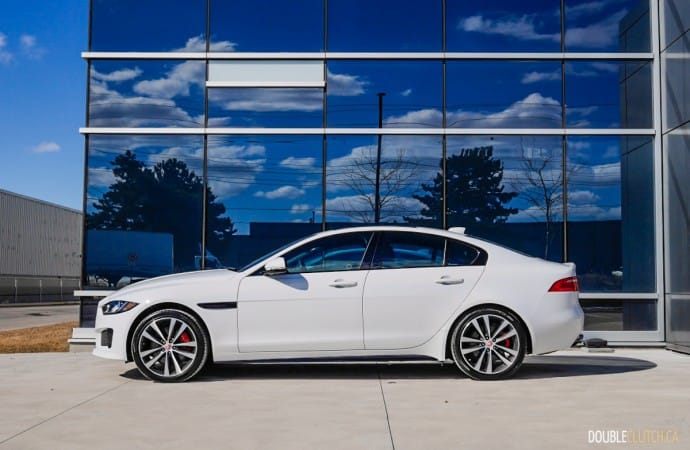 We are fairly certain that the Jaguar XE is not too high on anyone’s mind when they think of compact luxury sports sedans, which is unfortunate because it is a legitimately good car. We decided to borrow a 2019 Jaguar XE S AWD for a round of road testing to remind readers what the luxury sport sedan from the United Kingdom can do.

Even in a white body colour, one that is ubiquitous in this particular segment, our XE S AWD tester still manages to stand out. Its chief designer, the world-renowned Ian Callum, once again has managed to create an aggressive and sophisticated looking car that captured attention everywhere throughout our test week. Upfront, the Jaguar XE S features a pair of squinting xenon headlamps, a large oval grille, and complex yet flowing bodylines to create that imposing first impression. 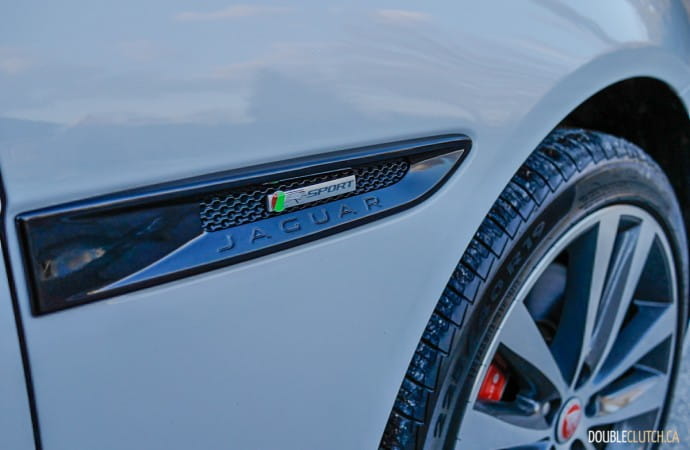 The Jaguar XE S has a crouching stance that makes it look like a jungle cat ready to pounce on its prey, and our tester was equipped with an optional 19” split-spoke wheels that perfectly showcase the large red brake calipers behind. The rear design of the car loosely resembles Jaguar F-Type (reviewed here) with the design of its taillights.

The XE comes standard with a 247-horsepower turbocharged four-cylinder engine, and our XE S test vehicle gets the upgraded supercharged 3.0 V6 that pumps out a healthy 380 horsepower at 6,500RPM, and 332 lb-ft. of torque. Power delivery is linear and buttery smooth, with a seemingly endless power band. There is no lag between throttle input and actual acceleration, powering the XE from a standstill to 100km/h in as little as 5.2 seconds. The classic Roots-type supercharger also rewards drivers with a beautiful whining sound that adds to the overall sensory experience. 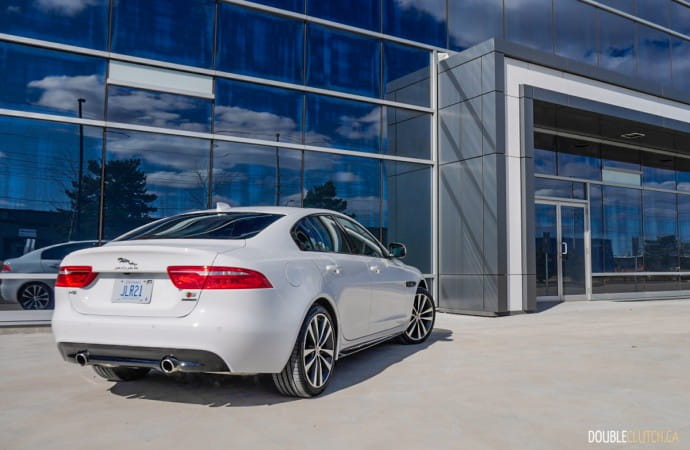 Power is sent to all four wheels using a ZF eight-speed automatic gearbox, which is excellent in its own right. Gear shifts are completed at a lightning quick pace, and drivers can take over using paddles behind the heated steering wheel. The rotary gear selector knob on the centre console puts on a show of its own, rising from a flat piano black surface upon engine start up. Drivers can switch between various driving modes using the buttons below the gear selector, although we did find ourselves wishing for bigger buttons for easier application.

The four driving modes; Comfort, Eco, Dynamic, and Rain/Ice/Snow, are distinct. We enjoyed that Jaguar offers drivers the option to individually program the Dynamic settings using a setup function in the menu. It allows customization of engine response, steering weight, gear shift behaviour, and suspension settings. The steering is nicely weighted and accurate, but lacks a bit of feel. The adaptive dampers, even in the Comfort setting, are a tad too firm, making the car feel a little skittish over bumpy roads. The XE S AWD feels planted over smooth pavement, and maintains composure during acceleration out of corners. 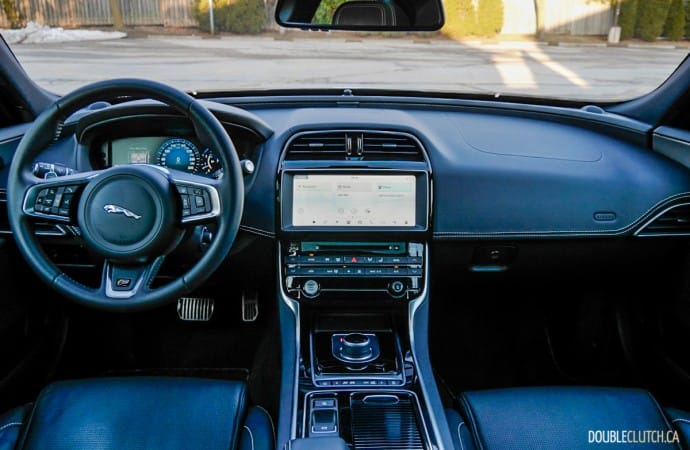 Rated fuel economy for the XE S is 11.8L/100km city, 8.2L/100km highway, and 10.2L/100km combined. Our test week yielded results of about 12.5L/100km, with the Jaguar XE S being out of its natural habitat most of the time, treading through city stop-and-go traffic. When we did get it on a stretch of open highway, it managed to cruise along with ease while using about 8.8L/100km of premium fuel. The XE S has a fuel tank capacity of 63L.

As a result of the XE S’ low slung roof and high belt line, entering and exiting the cabin requires a bit of caution and outward visibility, especially towards the side and the rear, is little compromised. Visibility out front, however, is excellent, and the panoramic roof helps the interior avoid feeling cramped. The interior layout is attractive, with liberal use of leather, chrome, and piano black trim pieces to create a modern and upscale environment. Ergonomics left a little to be desired, with a two-tier door panel design that splits the window and memory seat switches. We struggled to find a comfortable resting position for the left arm. We were able to quickly adjust to our driving position using the 14-way power adjustable and heated front seats, and there is plenty of thigh and lateral support. The rear seats are not heated, which is something we wish it would do to make up for the limited head and legroom. 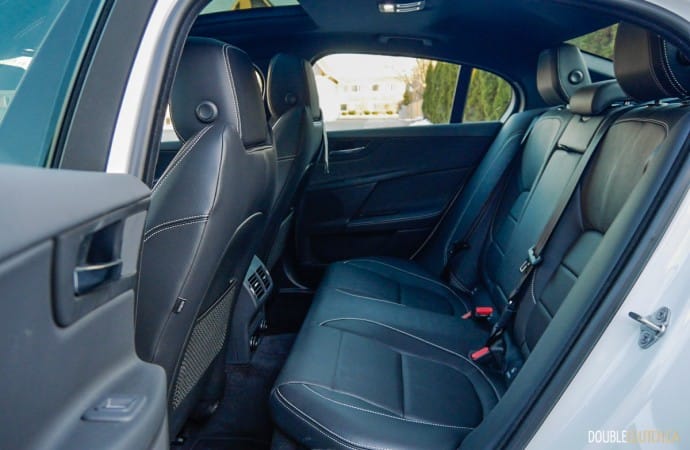 Infotainment is controlled using the 10.2″ touchscreen on the dashboard, and it runs Jaguar’s InControl Touch Pro system. Android Auto and Apple CarPlay integration is supported, and the touch response is sensitive. Our tester is equipped with the optional Technology Package, which includes the Meridian Surround Sound system, a solid-state drive-based navigation system, and a TFT Virtual Instrument Cluster. 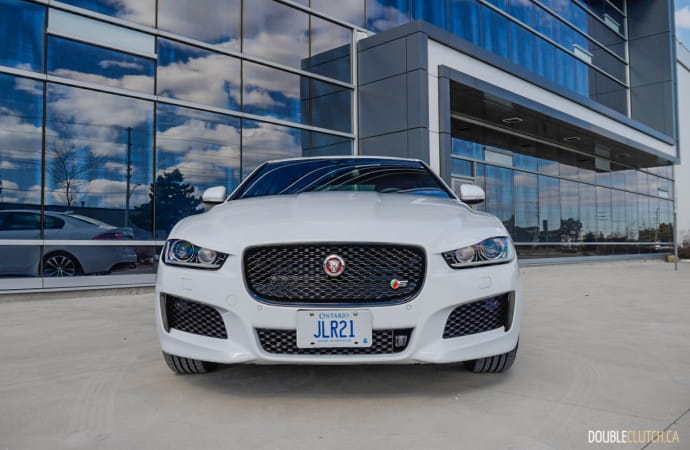 The XE S AWD starts at $61,500, and our tester was equipped with a $3,170 Technology Pack, $310 Black Pack, a set of 19″ wheels, and heated front windscreen for $410, bringing the as-tested total to $65,900. It sits on the high side of the class, alongside its German and Swedish competitors and atop the rest of the segment. Being the only one in its segment to use a supercharged-only engine (Volvo S60 uses both turbo and supercharging to power its T6 engine), its engine is one of the silkiest and it accelerates effortlessly in any speed. Interior layout and material are not ideal and features one of the tightest rear seats along with the Genesis G70 (reviewed here).

The 2019 Jaguar XE S AWD is a special car. It has flaws, but the way it elicits emotion is undeniable. The XE S does not deserve to be forgotten, and with the important changes announced to the 2020 XE including refreshed styling, revised engine lineup, upgraded suspension, and a new interior featuring Jaguar’s Touch Pro Duo infotainment, it will be interesting to see if it can land itself on more people’s minds when the time comes. 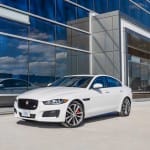 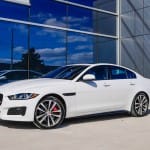 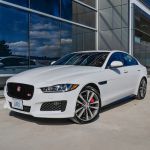 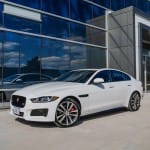 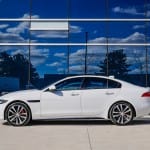 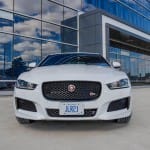 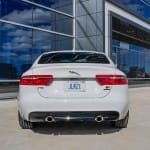 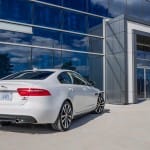 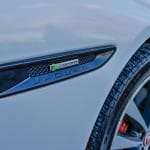 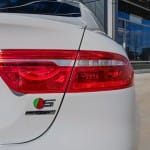 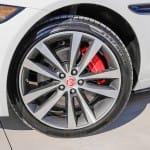 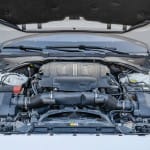 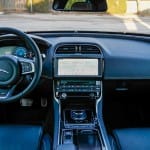 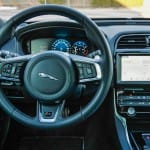 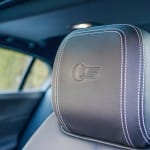 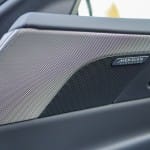 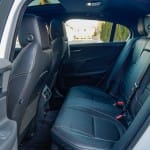 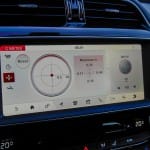 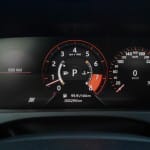 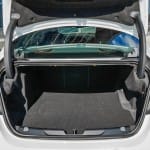