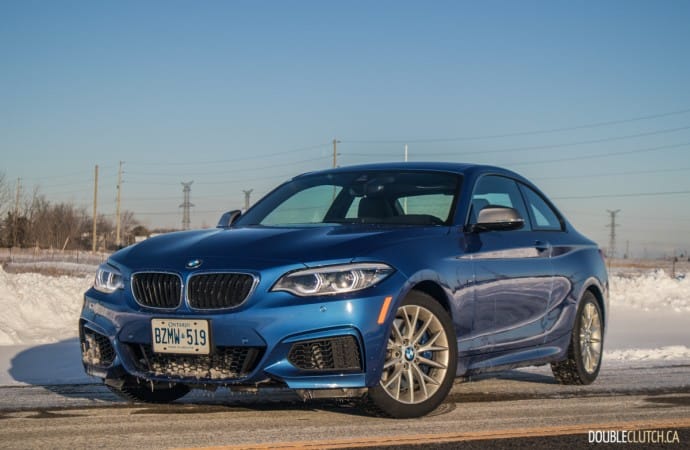 We live in an age where technology has taken over the automotive landscape.

Whether it’s autonomous driving, fully electrical propulsion, or advanced connectivity, road testing a new vehicle is becoming more about the gadgets that comprise a car rather than the car itself. This car, a 2019 BMW M240i xDrive, is a back-to-basics approach that reminds us of what made the BMW performance car special to begin with. 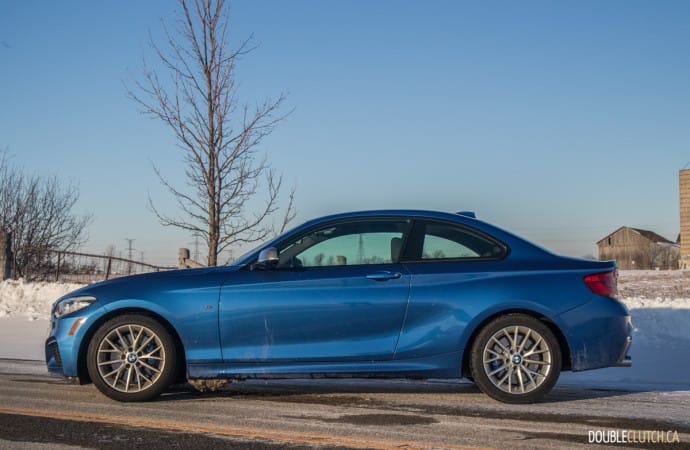 The 2-series is one of the smallest vehicles under the BMW name, and sits below the 3-series (reviewed here) in both price and size. Introduced for the 2014 model year, the current 2-series (chassis code F22) is one of the simplest looking BMWs available. It’s not particularly striking, but it’s handsome and well proportioned. The weight distribution is also at a near 50/50 level, which makes for a particularly balanced driving experience. At 174.5” in length, it’s not exactly a tiny vehicle, but more importantly the 2 is the perfect size for most young professionals.

Available in both coupé and a convertible forms, the M240i is the more desirable of the three available powertrains. The entry-level 230i gets a four-cylinder mill, while this M240i is powered by BMW’s B58 3.0L turbocharged inline six-cylinder engine. It pushes 335 horsepower and 369 lb-ft. of torque, good for a sprint from a stop to 100km/h in just 4.4 seconds. It’s a seriously quick car, and from the seat of my pants it feels no slower than the M2 (reviewed here). The B58 engine is a buttery smooth and provides excellent response. It knows when to kick in boost, and it comes on seamlessly. 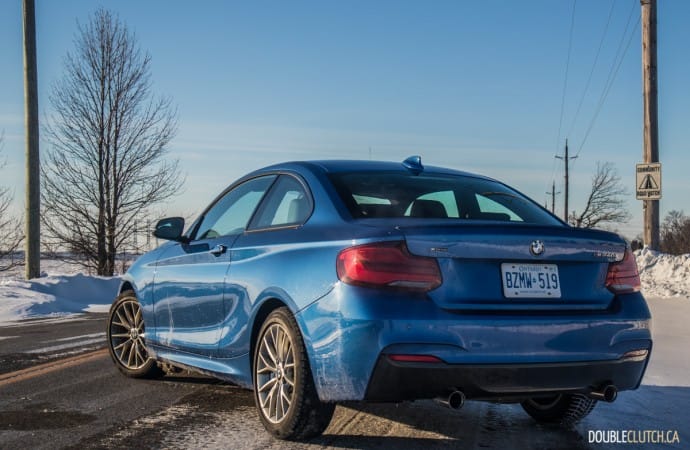 The M240i is available in both rear-drive and all-wheel-drive configurations, and our test vehicle was equipped with the xDrive system. Our test took place during one of Toronto’s record snowfalls, and while those around me were questioning the little BMW’s ability to actually get anywhere, I came away extremely impressed. Equipped with proper winter tires and a slightly smaller wheel setup, this compact coupé was climbing hills where large 4×4 SUVs were struggling. Ground clearance wasn’t really an issue either, and the M240i effortlessly crossed the entire length of the city twice in the worst conditions I have seen in at least two decades.

While electric power steering has now become the norm, certain automakers have figured out the recipe to a truly responsive steering system with some analog feel. BMW is one of the few, and the M240i handles like it’s on rails. The steering has a bit of a dead zone on-center, but turn-in is gradual and there’s excellent response beyond this point. The Dynamic Stability Control can be fully defeated to ensure you’re not getting stuck in deeper snow, and the rear-biased xDrive system will kick the rear out on demand effortlessly. 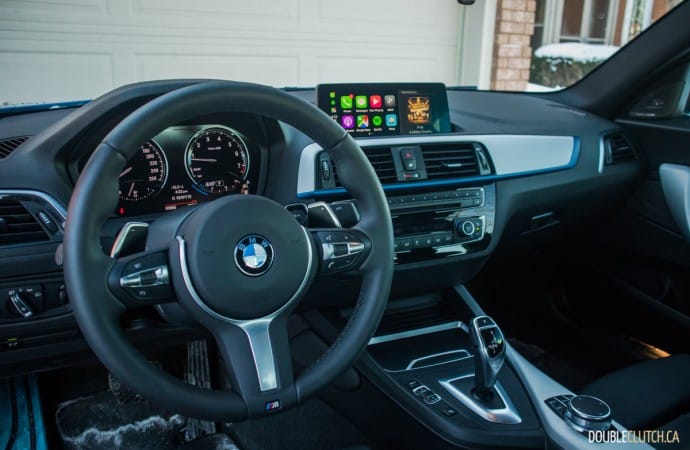 A six-speed manual is available and the perfect complement to the 3.0L turbo-six, but the vast majority of North American buyers will opt for the eight-speed automatic equipped on our test vehicle. We road tested a 2018 M240i (reviewed here) with the manual, and came away with a very positive impression on the setup. The automatic is a ZF-sourced box, and by far the best traditional torque converter automatic available on the market today. Those who do a lot of city driving in bumper-to-bumper traffic will not be making a poor decision by going with the automatic.

BMW Canada rates the 2019 M240i xDrive at 11.2L/100km city, 7.6L/100km highway for a combined rating of 9.6L/100km. Our test took place in winter conditions with temperatures dipping well below the -20 degree Celsius mark. We observed 10.4L/100km in combined driving; a reasonable number, however we wish the 52L fuel tank was a bit larger to extend the potential driving range before needing to refuel. As with all other vehicles in this segment, the M240i requires 91-octane premium fuel. 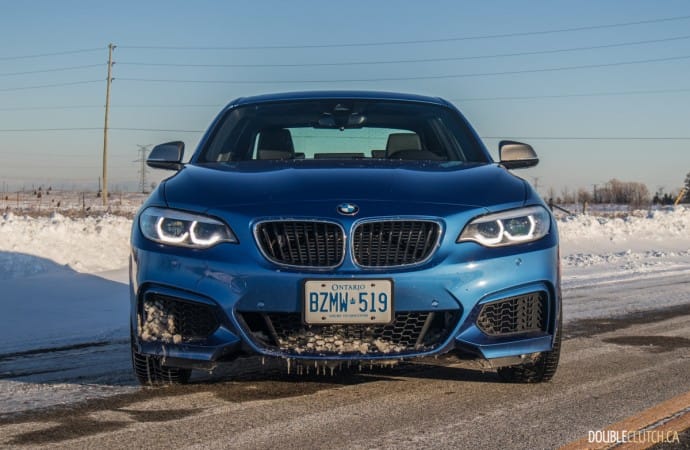 When comparing the M240i’s interior to the rest of the current BMW lineup, it begins to show its age. It doesn’t have the latest version of iDrive, and the dual-zone climate control lacks a “sync” feature. The instrument cluster lacks some of the features that more updated models offer, and the wireless Apple CarPlay connectivity, while appreciated, wasn’t as seamless as some of BMW’s other offerings.

As far as simple is concerned, this BMW is a winner. Those who want minimal frills can opt out of some of the packages, the all-wheel-drive system and fancy paint. Even opting for the manual would save money, and make for one hell of a driver’s car. The driving position is almost perfect, visibility is excellent, and the sport seats are decently comfortable. The rear seats are a touch cumbersome to get in and out of, but those of smaller stature will have no issues getting in or out. 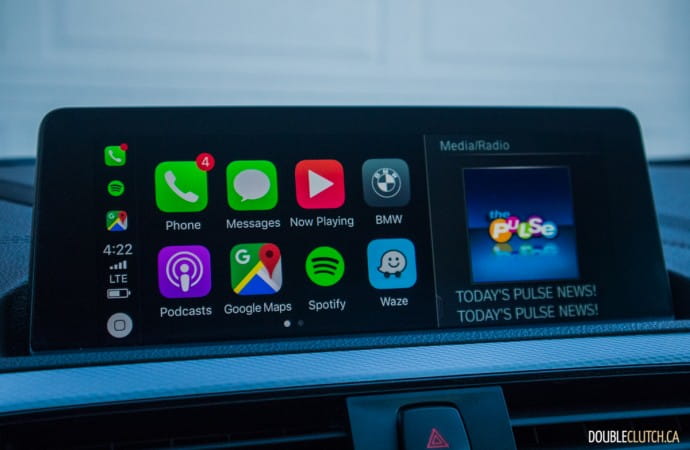 Pricing for the base 230i starts at $38,450, while the M240i starts at $47,200. Adding xDrive to the mix brings the base sticker up to $51,000 and can only be had with the automatic transmission. The Estoril Blue paint on our tester looked particularly sharp and is an extra $895. Our test vehicle was equipped with the $4,500 Premium Package Enhanced, which adds a sunroof, park distance control, Apple CarPlay, navigation, Comfort Access, and satellite radio. Lastly, the $1,500 M Performance Exhaust is an absolute essential and brings the price to $58,345.

The value proposition is certainly there, but the M240i’s problem is that those requiring four doors in their year-round daily driver are out of luck. These buyers will gravitate towards the Audi S3 (reviewed here) or the Mercedes-AMG CLA 45. Those wanting to spend a bit more can stay within the BMW family and get the sensational new M340i as well. The M240i is more of a performance car than either the Audi or the Mercedes-Benz, and the latter two’s all-wheel-drive systems are heavily front-biased. 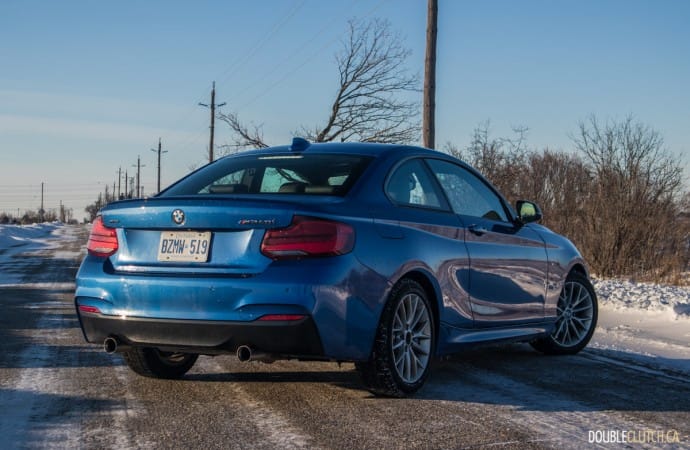 As a driver’s car, the 2019 BMW M240i xDrive is a runaway winner. It offers performance scarily close to its M2 sibling, and it’s very reasonably priced. Those who consider themselves enthusiasts and have the ability to sacrifice rear doors would be doing themselves a favour to check out this brilliant little car from the Bavarians. My recommendation is to skip the xDrive and the automatic for maximum fun. 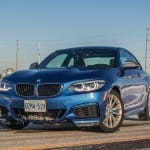 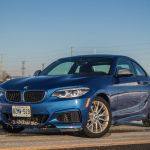 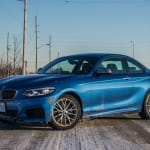 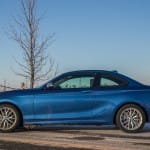 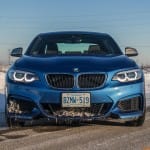 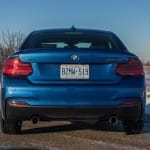 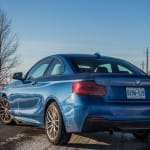 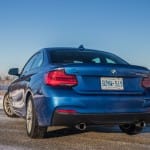 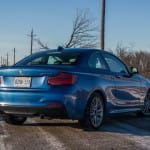 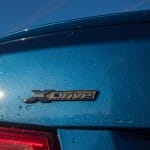 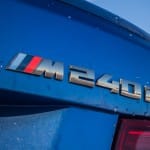 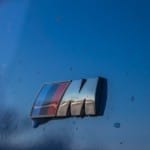 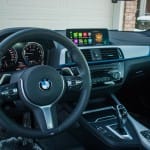 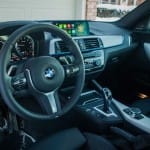 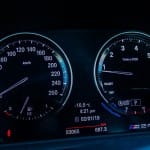 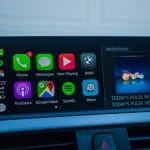 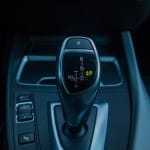 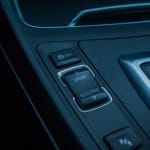 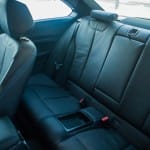