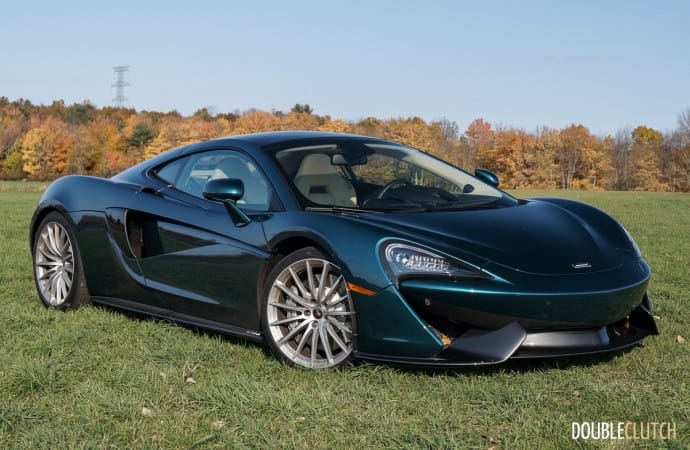 A grand tourer that feels every bit like a thoroughbred supercar from Europe.

Supercars of the 1980s and 1990s are the mold that formed my passion for automobiles as a whole. Machines like the legendary Lamborghini Countach and Ferrari 550 Maranello defined who I am as a car guy, and now that my job involves road testing the latest on the market, I’m almost embarrassed to say that supercars don’t really capture my interest in the same way that they used to. This year the game has changed though – enter the 2017 McLaren 570GT. Straight from the same automaker that brought us the McLaren F1, indisputably one of the best cars the world has ever seen, the 570GT is a grand touring supercar of the finest kind. 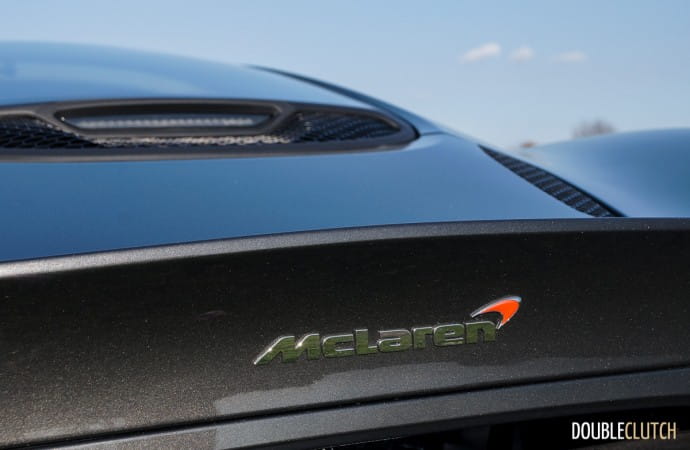 McLaren produces two cars under the 570 umbrella, both sharing the same powertrain. The 570S is sportier, a bit faster, and firmer in every way, but that’s the purpose it’s intended to serve. The “GT” moniker on the 570GT, contrary to popular assumptions, doesn’t imply a more powerful car; it speaks back to the classic definition of a Grand Touring coupé. Chief designer Robert Melville has tweaked the styling ever so slightly to differentiate the 570GT from its sibling. There is now a convenient hatchback, a tinted, heated glass cover that’s hinged at the right side of the car, sleekly opening to allow access to 12.4 cubic feet of stowage. Of course, if you wish, McLaren will sell you custom luggage designed to fit perfectly in your 570GT.

The modifications to the 570GT’s coachwork and trim have resulted in a slight weight increase, bringing the car’s weight to about 2,975 pounds. This isn’t significant considering McLaren claims the 570S to weigh 2,894 pounds, but it does impact acceleration by a slight number. Both cars come with a 3.8L quad-cam V8 engine, twin-turbocharged and intercooled. Horsepower is 562 at 7,500RPM and torque is 443 lb-ft, peaking at 5,000RPM. The car is fast – 100km/h comes in just 3.4 seconds when compared to the 570S’ 3.2, but unless you’re driving the two back to back, it’s just not noticeable. Top speeds of both cars are 204 mph (328 km/h), regardless of configuration. 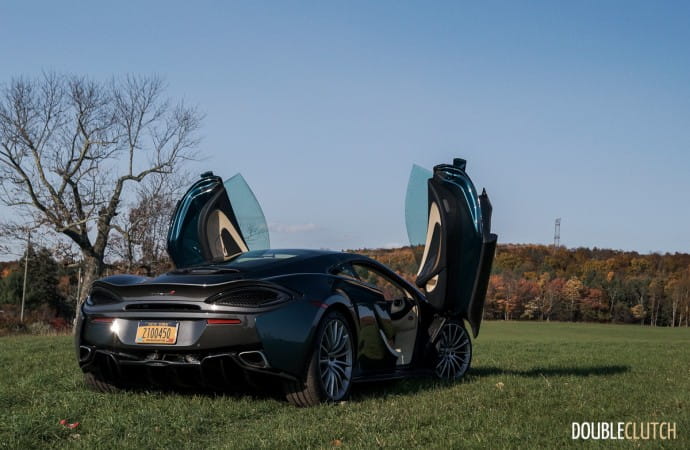 Blistering quick acceleration is helped with a seven-speed dual-clutch automatic transmission, one that McLaren calls “Seamless Shift Gearbox”, or SSG. Purists may ask for a manual transmission, but we’ve now crossed over that threshold when automatics have just become so good that it’s physically impossible for any human to pull off a faster shift than a good twin-clutch. Ferrari, Lamborghini, and McLaren have all accepted well-tuned DCTs as their de facto gearboxes, leaving Aston Martin almost completely alone in the war to save the manual. The 570GT sends power to the rear wheels; no all-wheel-drive variant is available, though this is a more livable and comfortable (yet no less wild) alternative to something like an Audi R8 V10 Plus (reviewed here). Speaking of Audis and traction: this 570GT is so good at putting all that power to the ground – McLaren’s excellent traction control is nothing short of amazing. It almost felt like all four wheels were getting the job done.

The 570GT uses the same carbon-fiber tub and mid-engine layout as the 570S, but there are some significant chassis changes that alter the car’s behaviour. Remember; this is the grand touring model and not meant to be a track day hero. McLaren has implemented a reduction in spring rates, 15% in front and 10% out back. When comparing to the 570S, the 570GT’s adjustable dampers have been modified for a better ride. Again, only when the two are side by side are these changes evident, and we were amazed at how well damped the 570GT is. Cresting a hill on a curvy, nearly abandoned rural back road the car just hugged the pavement with poise and confidence – no issues whatsoever. When cornering, the tight suspension minimized body roll and kept both occupants snug in the well-bolstered seats. 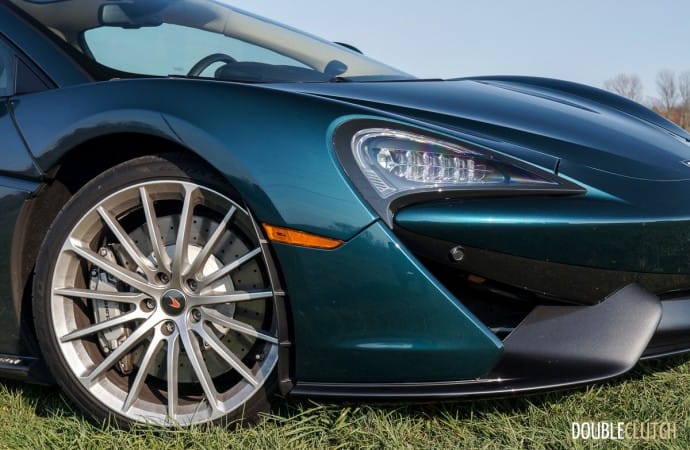 McLaren has reduced the steering ratio on the 570GT by just 2%, which does mean slower steering but not by much. The car still handles like a supercar should, changing direction with ease even at seemingly impossible speeds. A ton of analog feedback makes itself present through the wheel; the driver becomes one with the car when carving corners. The 570GT is a car that requires a very conscious state to drive, as the experience is visceral, aural, and appeases all five senses. Prodding the accelerator more than you should will result in the rear end kicking itself out, and oversteer reminding you to keep yourself in check.

All of that said, the 570 is a remarkably agreeable car when driving it normally. The GT is an expression of precision, and should the climate (and your wallet) support this lifestyle, is a car that can effortlessly be used as a daily commuter. Whereas the vast majority of supercars are relegated to weekend, this McLaren is almost supportive and encouraging of any type of drive. The drive mode can toggle “Powertrain” and “Handling” between three settings – “Normal”, “Sport”, and “Track” – each with varying degrees of sharpness. Even when left to itself in “Normal”, the car packs impeccable accuracy while maintaining McLaren’s philosophy on passion – it doesn’t feel like a video game. 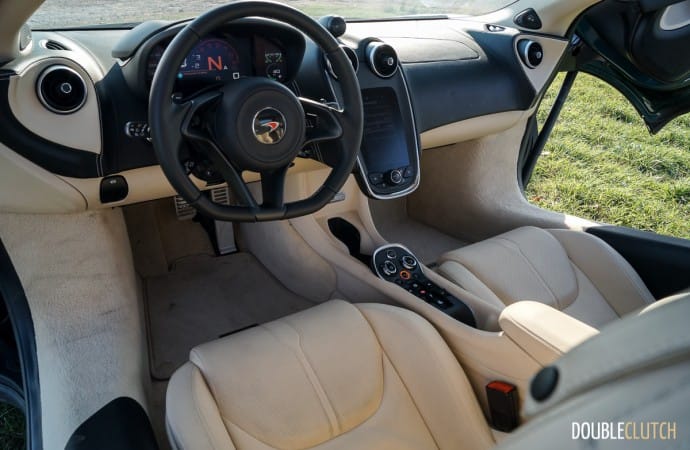 Opening the “billionaire doors” (as dubbed by HBO’s Silicon Valley) and stepping into the driver’s seat redefines the 570GT from the 570S. The roof is a full glass unit, bringing plenty of brightness into the interior. Naturally, the glass roof impacts the car’s NVH, but McLaren has added more sound deadening material to compensate for this – the 570GT’s interior is actually slightly quieter than that of the 570S. Interior materials are simplistic and modern, with contemporary design and excellent fit and finish. We even like the font McLaren uses on the digital displays – it fits in with the car’s image very nicely.

All of the switchgear and controls are digital, including the gear selector (buttons on the center console) and the instrument cluster. The door lock buttons and window switches are also strategically placed on the center console, directly below the drive mode selectors and on either side of the gear buttons. Infotainment is managed by a portrait-orientation touchscreen with a matte finish, which has a clear display even in direct sunlight. Aside from fine leather seats and carpets used throughout the cabin, the 570GT has soft-touch materials and at no point does anything feel cheap. 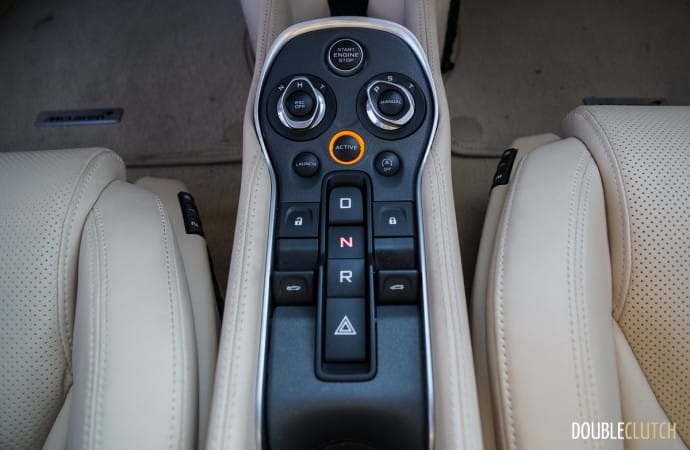 The 570GT we drove was a US-spec car, and as such pricing starts at $198,950. There’s a $1,680 charge for the special paint job in Pacific Blue, $1,090 for silver calipers, and $2,000 for the unique interior upholstery. Add another $1,040 for the colour-coordinated rear zone in Areia Nappa leather and $2,240 for the Bowers & Wilkins sound system and you’re at the suggested retail price of $207,000. Certainly not cheap, but there is a decent amount of value here, especially when considering the sensational powertrain and thoroughly upscale interior trimmings.

The 2017 McLaren 570GT is a grand tourer that feels every bit like a thoroughbred supercar from Europe. With a full line of cars starting with the 540C ($196,500CAD) and going all the way up to the hybrid P1 hypercar, McLaren is certainly back with a repertoire of spectacular products. I was beginning to get the feeling that current supercars may have become a bit numb and less interesting overall than their predecessors. McLaren just might be the only automaker that’s capable of combining precision and engineering with unadulterated passion; delivering in the process what’s one of the most vehement supercars in the world. 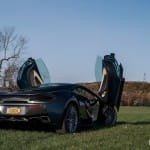 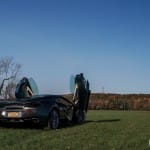 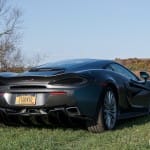 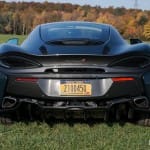 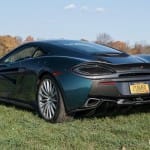 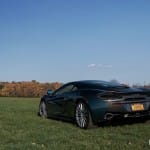 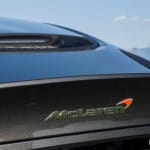 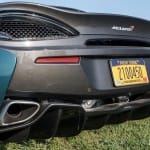 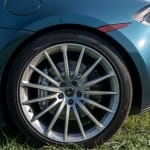 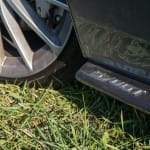 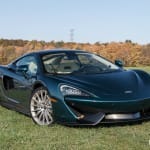 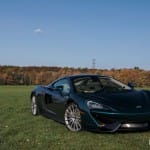 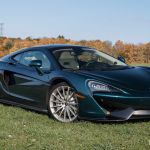 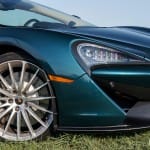 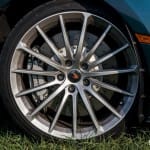 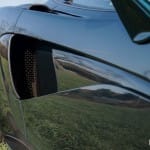 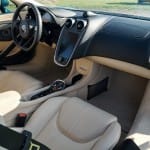 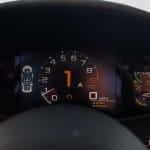 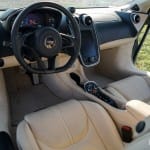 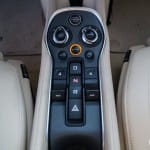 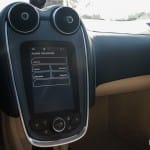 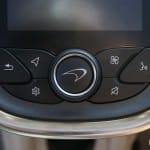