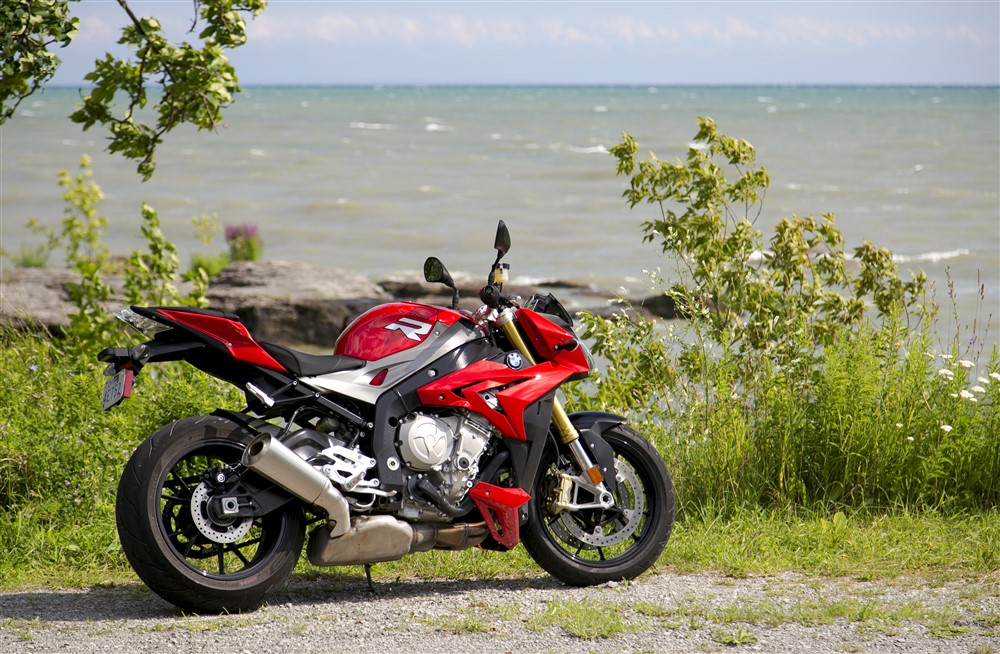 Quite possibly the best bike out there |

A masterfully engineered riding machine that impresses more with every passing mile.

You get what you pay for.

It’s an expression I’ve heard my whole life suggesting that if you skimp on your investment, it’s just as likely the manufacturer has skimped on the quality of whatever you’re purchasing. 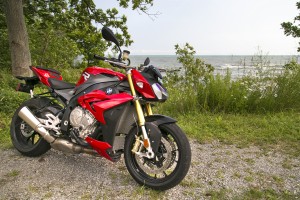 To put it another way, quality costs money.

On the surface, BMW’s new S1000R naked sport bike (or “roadster” as they call it) seems a little pricey at a cost of $14,700 especially when the likes of Kawasaki’s new Z1000 rings in nearly two grand cheaper with little sacrifice in performance.

That is, it seems pricey at least on paper. 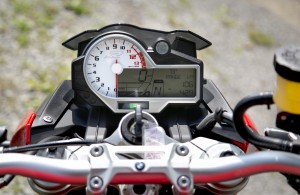 But BMW has loaded up the S1000R with a lot of little niceties like heated grips, a comprehensive trip computer and even cruise control – features not often seen on such a sporting machine.  Robust 46 mm, adjustable inverted forks, ferociously powerful 320 mm (front) Brembo brakes with BMW’s Race ABS (defeatable) and a host of other top tier components aren’t cheap either – but again, you get what you pay for.

BMW’s big roadster is much more than an assembly of high-end componentry and gadgets though, it’s a masterfully engineered riding machine that impresses more with every passing mile.  With the initial startup sequence, the quality is evident in switchgear that requires deliberate action.  Everything feels solid and the ignition and switches deliver an actual snap action instead of the vague movements in most bike components. 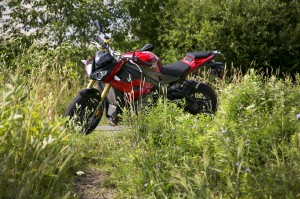 The 999cc inline-4 cylinder settles into a smooth idle that becomes a buzz-saw whine typical of racy litre-bike 4s as the revs climb.  Backing off the throttle, a few pops and fizzes speak to the high-strung foundations of this mill in the S1000RR faired superbike.  The power of the double-R’s engine has been re-tuned to deliver more mid range at the expense of a lower ultimate output (here “only” 160 hp).  Be assured, you won’t miss the power.

From idle to redline, every single degree of rotation on the throttle seems to provide a precisely metered delivery of those 160 horses; the drive-by-wire tuning being the best I’ve encountered.  With only 3,000 rpms on the tach, even a half-crack of the throttle will launch the S1000R into time travel.  Stunters or careless riders will surely have the front wheel airborne without thinking twice. 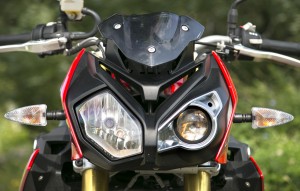 The S1000R’s clutch is a bit of a reach and requires more effort than I’ve grown accustomed to on most modern bikes, but then is likely better equipped to handle all the power and torque (112 Nm) the engine throws at it.

The meaty Pirelli Diablo Corsa (measuring 120/70 ZR 17 front and 190/55 ZR 17 rear) rubber keeps the S1000R planted securely around any curve, corner or on-ramp I could throw at it.  Without a track at my disposal, I came nowhere near testing the limits of this highly accomplished bike on public streets.  There was simply always more handling and more braking power in reserve no matter how hard I pushed. 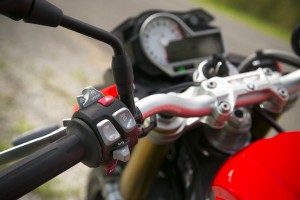 The same precision built into the fuel mapping seems to be applied to the steering too, with every miniscule road imperfection being transmitted carefully to the rider.  Merely think about leaning and the bike dives over into corners with sublime enthusiasm.

Lest you assume the S1000R is a single purpose machine like its world-conquering RR sibling, let’s set the record straight.  The tall, wide handlebars replacing the RR’s clip-ons allow for a more upright riding position.  This takes pressure off the wrists and means that riders like me shall willfully look for excuses to take detours on every trip, like the time I added an extra 250 kms in search of just the right lakefront photo spot. 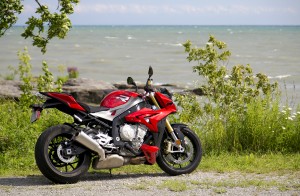 The wide and fairly flat seat did have me shifting around a bit after an hour, but with a 15-minute break, I was itching to get back on and ride even further into the sunset.  Wind buffeting at speeds higher than 120 will pull on your arms after a while, but tucking into the bike, what negligible wind protection one can find behind the tiny gauge cluster- mounted fairing makes enough difference to provide a bit of relief.

The seat-to-bars stretch provides a lot of space; a bit of a stretch for me, but those long of frame will surely appreciate it.  What they won’t necessarily appreciate is the high mounted pegs enabling aggressive cornering that will fold long-legged riders more than it did me (at a fairly average 5’9” height). 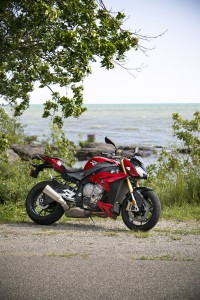 Navigating around downtown Toronto a precise throttle and wide handlebars mean nipping and tucking through traffic on the S1000R is as easy as on a bike displacing half as much engine.  This ease is furthered by a mass that’s easily managed and lighter than I had expected at only 207 kg fully fuelled and ready to ride, again speaking to its sports bike roots.

And yet the BMW is still remarkably unfazed by potholes and streetcar tracks with a suspension that effectively rounds off the sharp edges of the biggest road upsets, though always reminds a rider that this is a sporty perch.  A large part of the S1000R’s suspension brilliance is due to the Dynamic Damping Control (DDC), which electronically adapts suspension settings dependent on road surface conditions. 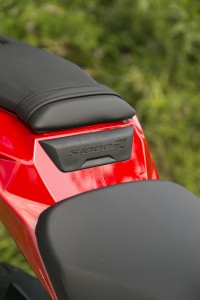 The new S1000R is a bike that is greater than the sum of all its high quality parts.  It exudes a sublime mastery of engineering and balances between hyper-capable, sport bike and comfy back-road carver ready to spend long days seeking out detours.

As a one-bike-that-does-all choice, it succeeds better than most.  Best of all though, the refinement, features and performance remind the owner that they truly have gotten what they’ve paid for.  Besides, at three grand less than its RR brother, the S1000R might even be considered a bargain. 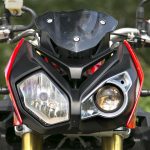 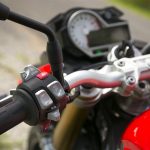 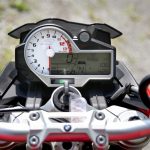 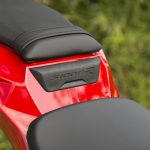 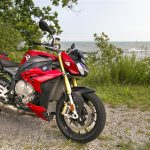 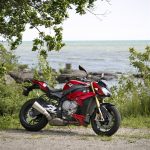 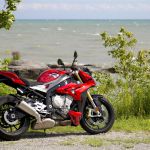 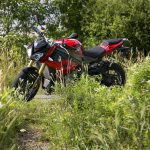