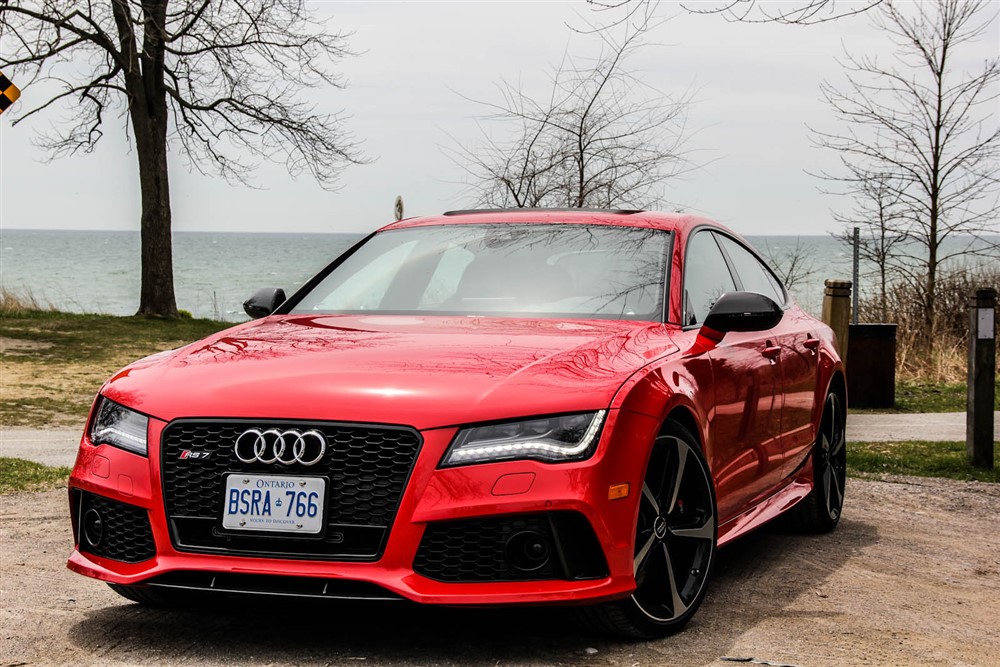 Giving the throttle a little blip results in a growl followed by a few pops.

First off; this 2014 Audi RS7 is a menace. It’s ridiculous levels of fast, combined with the sound of a monster and the looks of the devil himself. I drove my tester literally four kilometers before I stopped at the neighbourhood Tim Horton’s for a snack, and came out to see four teenaged “car spotters” snapping away at their camera phones. As I approached the car, I was bombarded with questions about it. Obviously this wouldn’t be my typical test week.

I picked up my Misano Red Pearl tester at the beginning of one of the first real weeks of Spring 2014, and the colour immediately stood out amongst the plethora of beige on our roads. One press of the “Engine Start” button also fires up a sound like no other – the RS7 roars to life with a vroom, then a bass-filled rumble. Giving the throttle a little blip results in a growl followed by a few pops. This car sounds simply astonishing. The twin-turbocharged 4.0L V8 is easily my favourite boosted engine on the market, and rockets the RS7 to 100 km/h in just 3.5 seconds.

Straight-line power is incredible, but even more incredible is how balanced the chassis is. Audi’s infamous quattro all-wheel-drive system helps the big RS7 corner like it’s on rails, and that’s not an easy feat for a car that weighs 4500 lbs. This car is just as comfortable as you’d expect it to be for a big four-door, and cruises down the highway in sublime comfort. The ride with all suspension settings in “Comfort” is smooth as butter (a little bit smoother than the harsh BMW M6 Gran Coupé) and the RS7 feels on par with the likes of the Porsche Panamera.

Because I had already driven the RS7 back when it was launched in the fall, I decided to take my test week to try some new things with it. For instance, the last time I drove the car, it wasn’t even close to being broken in, so my fuel mileage took a toll. I averaged a miserable 13L/100km on the highway, but obviously that was due to a lack of engine break-in. This test did much better – I averaged as low as 8L/100km on the highway, not far at all from the 7.8L/100km Audi suggests. Combined driving numbers in light driving with the Audi Drive Select in “Comfort” resulted in a reasonable 11L/100km. For a car with 560 horsepower and 516 lb-ft of torque, that’s not shabby at all. Naturally, the RS7 takes premium unleaded fuel only.

Adding onto the base price of $115,000, my test car came with $25,100 worth of options on it, taking the as-tested total to $140,100. The visuals are turned up a notch with the Carbon Optics Styling Package and the Sport Exhaust with black tips. The interior is just as suave on the inside – this car had the Alcantara headliner and the Beaufort Oak wood trim with aluminum inlays. Best of all though is the Bang & Olufsen sound system ($6500 on this car), but I’ll go on to talk about that a bit later. The last RS7 I drove was black, and it looked pretty elegant. However, with all the carbon fiber and the gorgeous red paint, this tester stands out in a crowd. 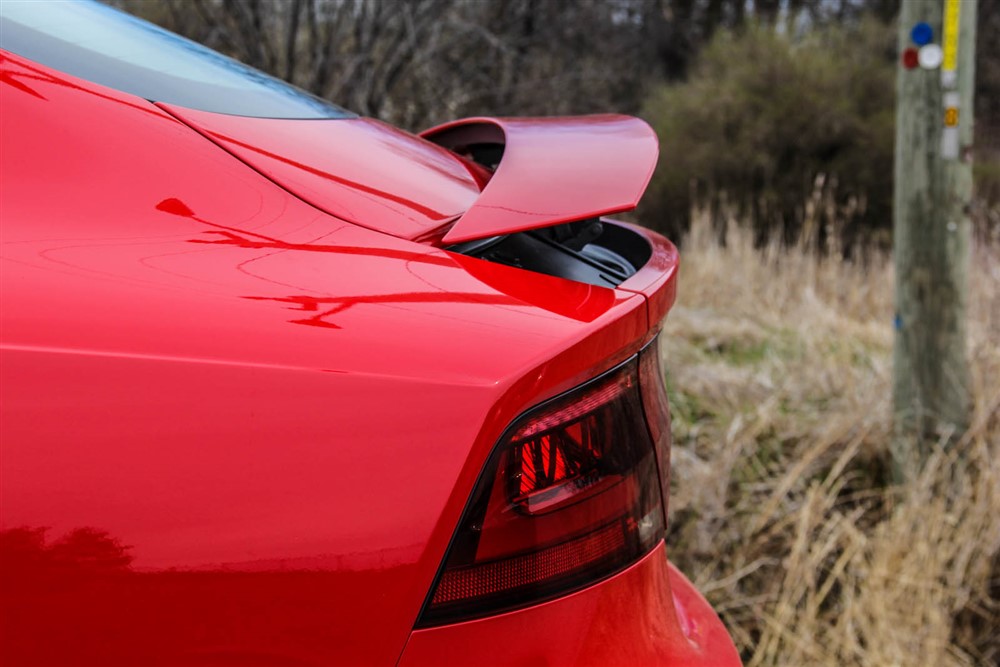 The interior of this 2014 Audi RS7 oozes class, elegance, and quality. The black seats are supportive and look delightful. My car was equipped with the Vision Package as well as the Driver Assistant Package and Audi Lane Assist. Starting with night vision in the middle of the instrument cluster and ending with lane-keep assist that actually steers the big Audi back into your lane should you doze off and start to drift away from your path. This plethora of toys can be excessive or unnecessary for the type of driver that would make the most of this lovely car, but I will say that the night vision is quite nifty and can come in handy on those dark country roads.

Bang & Olufsen’s sound systems have long been criticized throughout the enthusiast community for their pricing. In certain BMW applications, I would tend to agree; the “lesser” Harman-Kardon systems are significantly better value. Audi seems to have gotten it right though, and the system in the RS7 is no exception. While competing systems tend to overdo the bass, the fine people at Bang & Olufsen have tuned every sound system differently for each specific vehicle, and the resulting sound quality is seriously mental. The speakers in this RS7 mean business, and are able to reproduce treble, midrange, and bass notes perfectly. No matter how high the volume is cranked, there is literally no distortion and every genre of music sounds equally excellent. 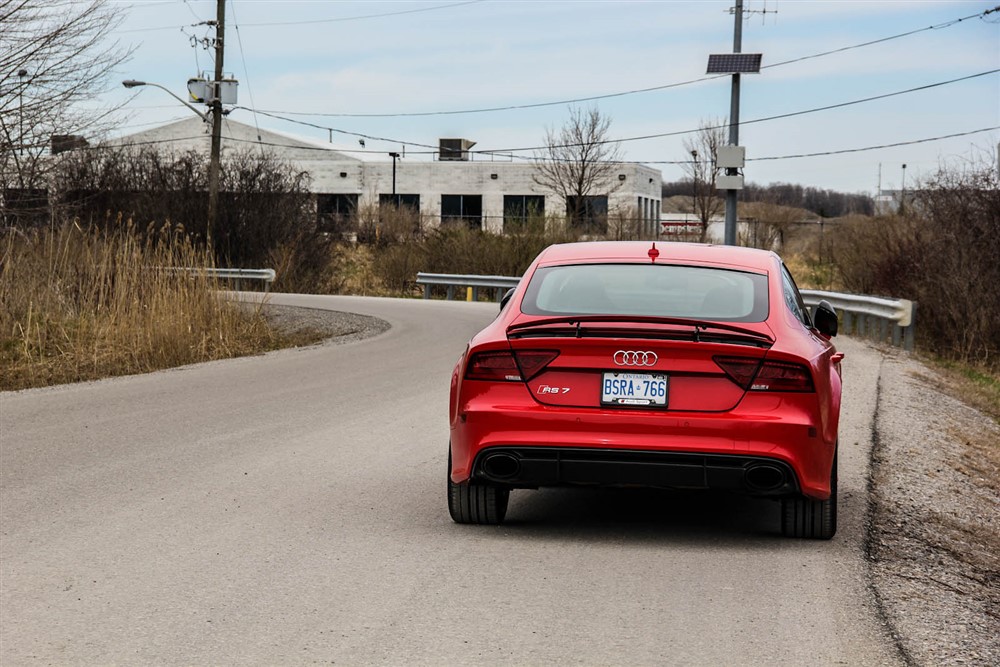 The styling of the whole A7 line makes it more appealing to me than the A6 or A8 lines. I like the added practicality of the hatchback-style body as well as the stunning looks of the car overall. The front has the aggressive blacked-out front grille and the stunning LED headlamps, and at the rear is the power-retracting rear spoiler – all of which add an additional kick of style to the RS7. The 2014 Audi RS7 is the answer to the BMW M6 Gran Coupé, the Porsche Panamera Turbo, and the Mercedes-Benz CLS63. Long live the lord of the rings! 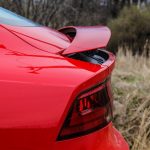 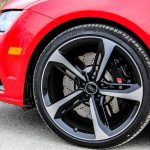 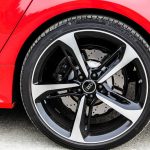 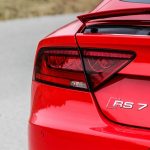 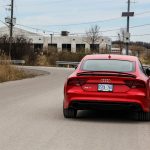 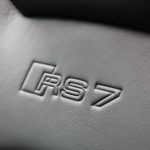 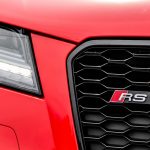 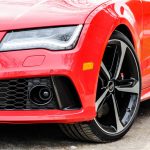 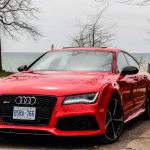