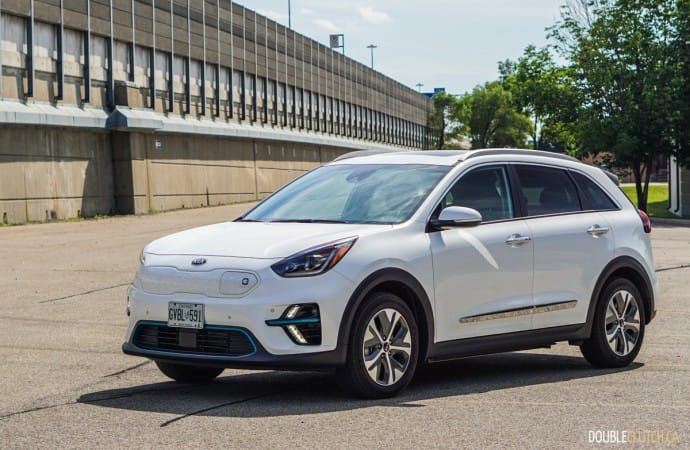 Pushing the Start button is when things get surprisingly futuristic.

As battery technology improves, charging stations proliferate, and market adoption on electric vehicles increases, we will see more and more interesting vehicles hit the market that can actually be suitable for evolving lifestyles. According to Kia Canada, the future is here in the form of the 2019 Kia Niro EV, and we actually happen to agree. 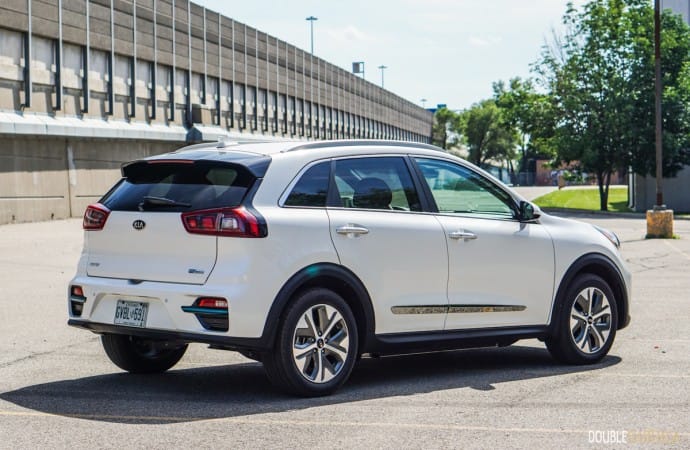 Available in only two trim levels, the top-tier SX Touring comes with an MSRP of $53,995 and adds so many features on top of the base EX model that its almost an entirely different car for the $9,000 price difference. Inside, these features include leather seats, a powered driver’s seat with memory, sunroof, heated seats and steering wheel, a Harman Kardon sound system, and tons of tech features for the passengers..

Both trims come with Kia’s UVO connected car services which along with emergency support and concierge services, allow you to use a phone app to check battery charge level, pre-condition the cabin, and other neat tricks. The only option on the Niro EV is the paint colour, adding a $200 charge for the Snow White Pearl, for an as-tested MSRP of $54,295 before fees, taxes, incentives and government rebates. 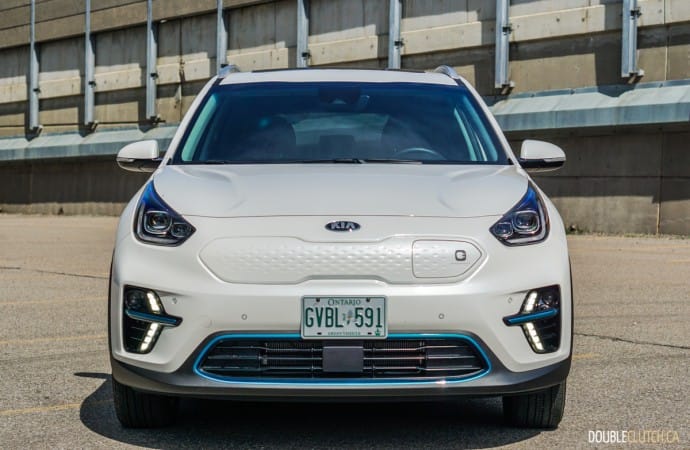 When you first sit inside the Kia Niro EV you will notice that there’s nothing all that special reminding you that this is an EV. The interior is in line with many gasoline or hybrid vehicles on the market. No flashy materials with some sort of cybernetic pattern printed on it to remind you there’s no engine; nothing except for a small badge that says Eco Electric on it. There are even metal paddles on the back of the steering wheel, but they aren’t to change gears.

The center of the dashboard is loaded up with a wonderful amount of physical buttons for HVAC and the infotainment system, with a few special EV buttons sewn into the mix. An eight-inch screen located in a perfectly convenient spot provides everything you need for radio, nav and vehicle functions, including Android Auto and Apple CarPlay. Just below is a wireless charging pad that was actually big enough to fit the gigantic Samsung Note 9. 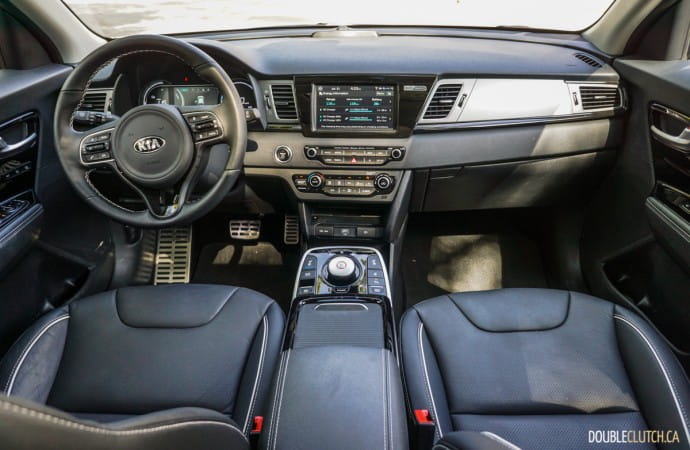 The center console is the home for the gear selection knob as well as heated and cooled seat controls as well as a decently sized storage area under the armrest. The rear seat is graced with a 115V AC outlet on the back of the center console, while rear seat heat controls are actually found on the rear doors. For the driver, everything needed is on the steering wheel, with occasional use buttons located by the left knee on the dash. All of this makes perfect sense, including the paddles on the steering wheel, which control how aggressive the regenerative braking is

Back seat room is decent, considering that the Niro is a subcompact crossover. Two adults will be fine in the backseat, but don’t expect this to be a five-person road trip with luggage. Thanks to a low floor and tall build, the cargo capacity with the second row upright is a fantastic 629L, growing to 1,804L when folded. This is enough for not only a grocery run, but a nice large Costco run too. This is significantly larger than our other favourite small EVs, the Chevrolet Bolt (reviewed here) and the Hyundai Kona Electric (reviewed here). 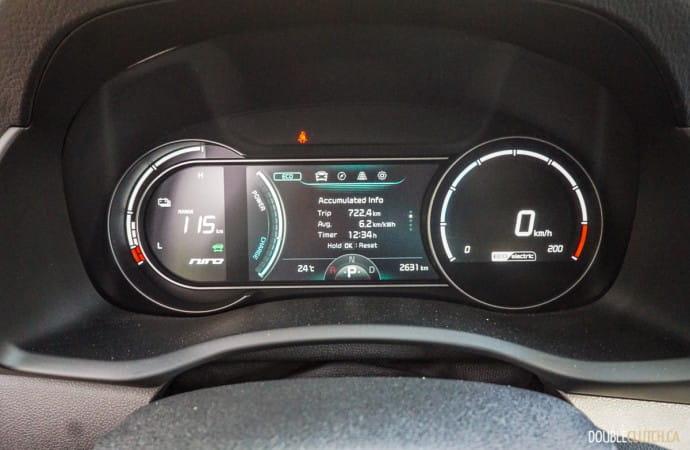 Pushing the Start button is when things get surprisingly futuristic. The interior electronics just turn on and you’re greeted with an instrument cluster that, when we turned it on, indicated vehicle range at over 450km. To test out the range anxiety we took this Niro EV for a long weekend way up into cottage country, past Huntsville, Ontario.

Settled in to the nicely bolstered front seats, 100% battery charge and the rear cargo area fully loaded up with luggage, gear and beverages we set off northbound without taking any of the typical EV range precautions. It was 30 degrees outside, so the air conditioning was on high, seat coolers on max, and driving style purposefully left unchanged from any other vehicle. This carefree attitude ultimately cost us around 50km of range, but when we reached our lakeside destination after a few detours, there was still 152km of range, and we had recorded a trip average of 6.0km/kWh. The future is now. 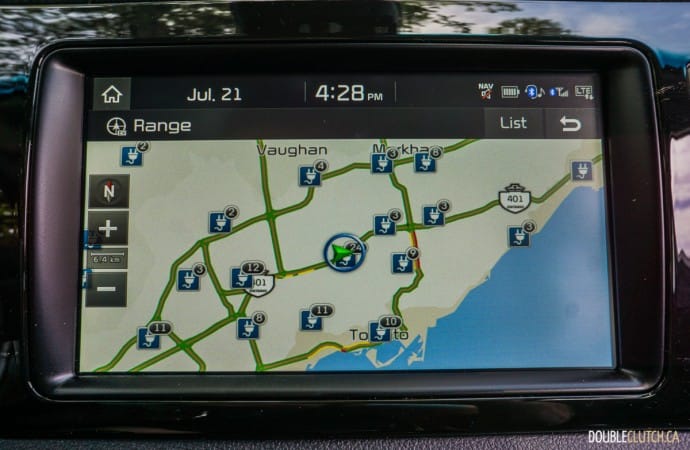 Measuring fuel efficiency on an EV is a tricky game. In straight electricity terms compared to other EVs, it is measured in kWh/100 km. The Kia Niro EV is rated for 16.8/20.5/18.6 kWh/100km (city/highway/combined). Translating the number on the dashboard into these ratings means that the northbound trip checked in at an average of 16.67kWh/100km. This beat the ratings without being easy on the car, and this wasn’t during a Canadian winter.

Batteries don’t like being cold, so EV range is significantly reduced in the winter as the system needs to be warmed up and kept warm. Short trips hurt this even more, with the battery constantly cooling down and being reheated with each stop. This is why the Niro EV is only advertised as having a 385km range. We noticed a similar impact during our summertime test, as a quick coffee pit stop caused the range to drop by 15km thanks to the sun heating up the passenger cabin. Unlike a conventional vehicle, it would have been more efficient to use the drive-thru. 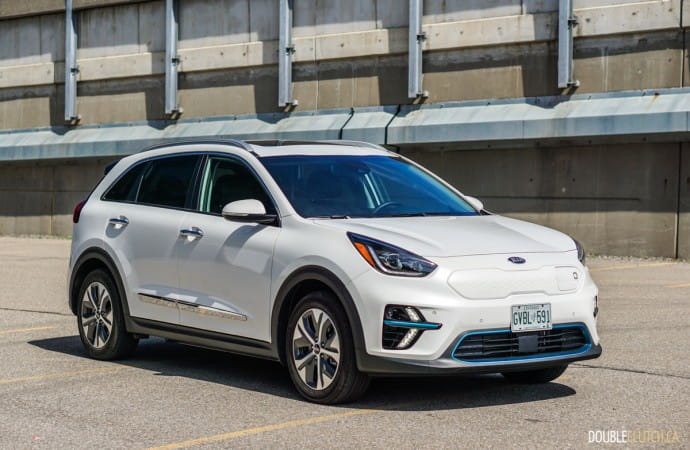 Popping the hood on the Niro EV is a funny experience. Being a front wheel drive car that can be purchased with a gas or hybrid engine, the electric motor is sitting right where the engine would be, and Kia had the sense of humour to even dress up the motor with an engine cover so that the casual observer would have to do a double take.

The electric motor takes up significantly less space than an engine, so there’s lots of empty room under the hood to let the 201 horsepower motor punch out its 291 lb-ft. of torque right from idle. There’s only a single gear in the transmission unit, so the Niro EV has nonstop linear acceleration with nothing but a little electric hum until the 8,000RPM redline. 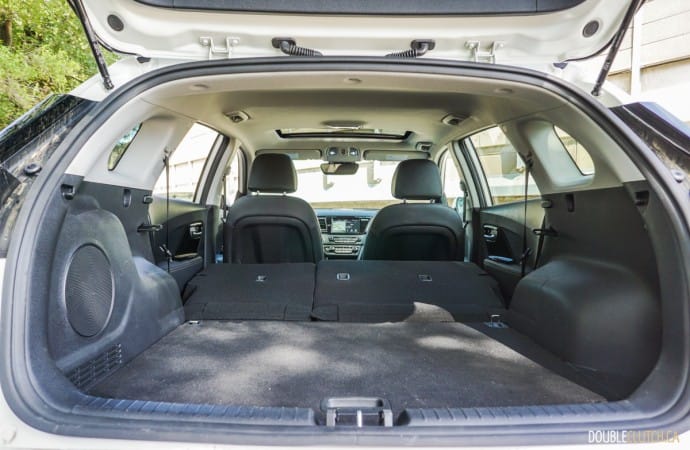 After a few errand runs, we plugged in the Niro EV to a standard 120v outlet at a cottage, and the display showed that 44 hours of charging was needed to reach 100% battery life. While this was slightly concerning, there were a few Level 2 charge stations within a 20-minute drive and a Level 3 station 100km away on the route home. Based on the drive up, the trip home was estimated to need only a 65% charge.

Setting sail for home with an 82% charge, our driving style changed to see what kind of impact it would have. With the air conditioning still on high, and seats being cooled, some more mindful driving habits managed to have a significant impact, with 245.6km driven at a fantastic 6.6km/kWh, or 15.15kWh/100km. The Advanced Smart Cruise Control works very well, accelerating and braking with efficiency in mind, having no negative effect on the range. The Lane Keeping Assist system is also top notch, smoothly adjusting the steering to stay in the lane. 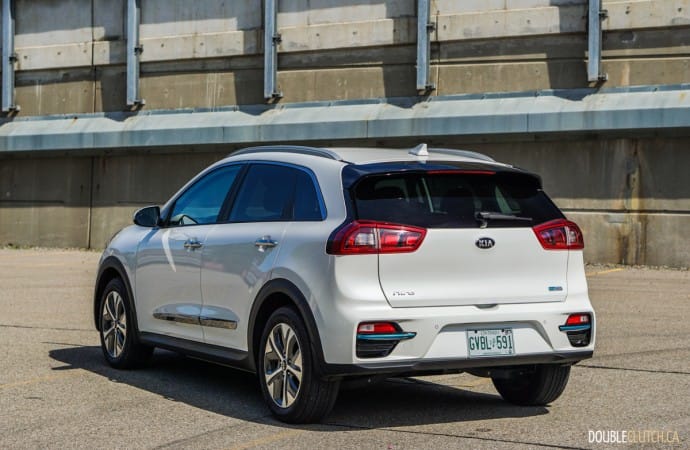 Anyone who is looking to purchase an EV should expect to install a Level 2 charger at home and likely at the cottage, too. There’s really no need to even charge at work for most, unless you have an unfortunately long commute. A Level 2 charger can fill up a completely depleted battery in just over nine and a half hours. Find yourself near a Level 3 charger, something that is becoming more and more common along major routes, and the Niro can acquire an 80% charge in 54 minutes, with 100% taking 75 minutes. Of course, with a 385-450km range, these stops won’t be needed very often.

If you are in the market for a car in the subcompact, or even compact size class, there really is nothing to fault the Niro on. It has a perfectly functional interior that comes with comfortable leather seats, sunroof, and lots of technology built in. The driving dynamics are spot on, acceleration is more than adequate, and it looks good. The 2019 Kia Niro EV is now the car to beat; the future is here. 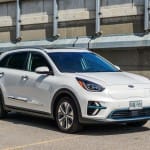 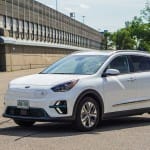 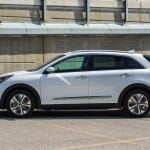 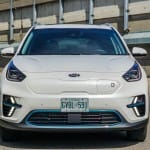 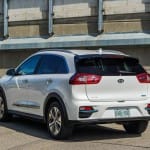 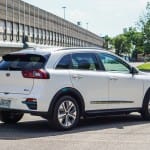 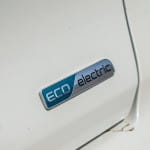 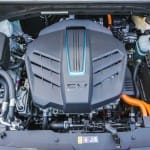 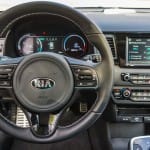 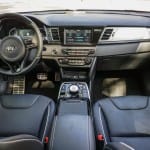 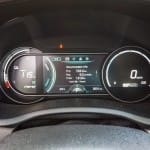 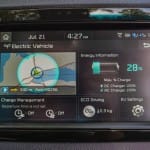 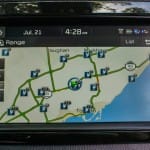 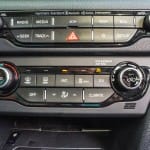 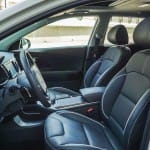 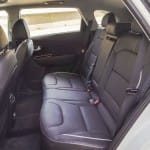 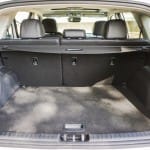 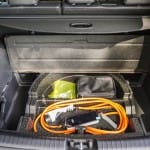 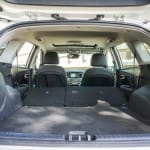