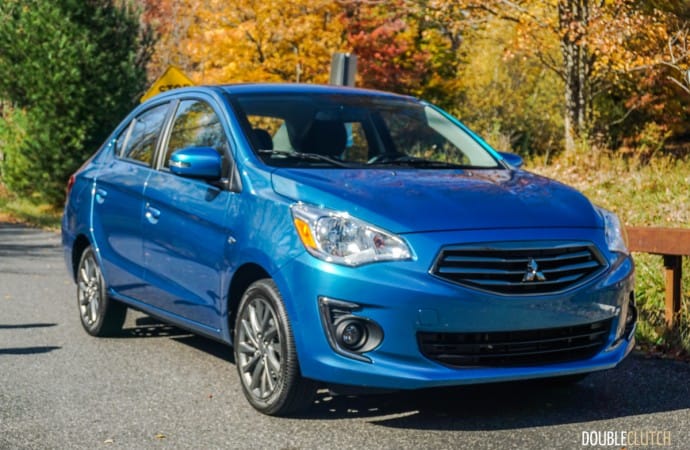 My editorial assignments over the past year have resulted in a sharpened perspective on the affordable subcompact segment. A class that incorporates sub-$10,000 cars like the Nissan Micra (reviewed here) and Chevrolet Spark, it’s also home to slightly more expensive options such as the Toyota Yaris Sedan (reviewed here). Somewhat of a newcomer is the 2017 Mitsubishi Mirage G4, a four-door sedan variant of the hatchback that has been the subject of criticism since its 2014 launch. We sampled the Mirage a couple of years ago, and came away with the impression that its price point (starting at $12,698 for the base model) is a huge factor considering the alternatives available. 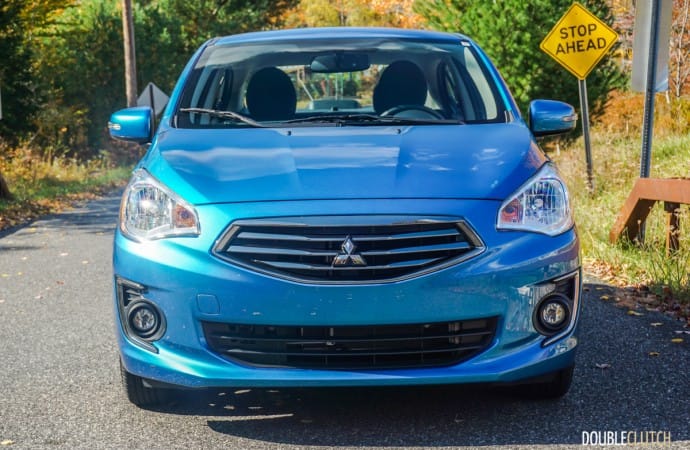 The Mirage G4 is based on the hatchback, but obviously with four doors rather than five. It’s a slightly more distinguished looker, though the rear overhang is massive and the overall profile is awkward. The front end on both the G4 as well as the hatchback has been refined, almost appearing happy (not unlike the second-generation Mazda3). This is the first Mitsubishi-branded sedan in the subcompact class to ever be sold in Canada, and it debuted in 2013 in other markets around the world.

Powered by the same 1.2L inline three-cylinder hamster as the hatchback, the Mirage G4 is all about the philosophy “slow and steady wins the race”. It puts out a miserly 78 horsepower and 74 lb-ft of torque, through a CVT transmission on our top-trim test vehicle. A five-speed manual is available on the base trim, which we expect will have a high take rate in Québec. Power delivery is adequately smooth, but there’s no hiding the fact that the G4 is just plain slow. Most buyers with city commutes won’t care, because it’s almost urgent around town, but out on the highway the car buzzes and groans. In comparison, the Spark (reviewed here) is far superior. 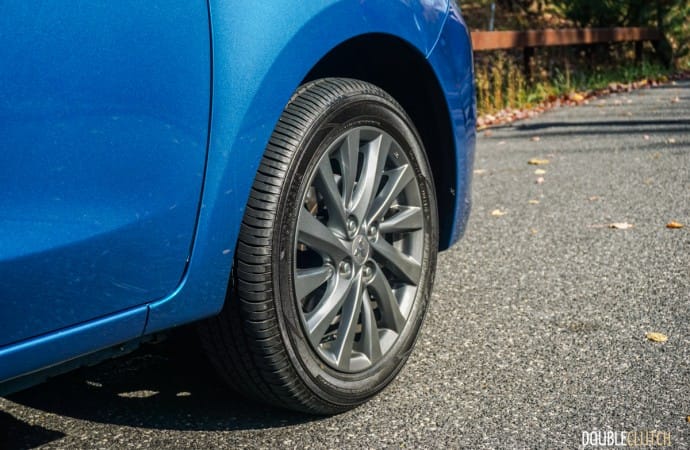 The brakes are also just “okay”, with discs in front and drums in the rear, and the 175/55/R15 all-season tires will keep you safe for three seasons. For those who have to commute in the car through the winter, we cannot stress enough the importance of winter tires. A few years ago we encountered a Toronto blizzard in a Mirage on all season tires, and it wasn’t competent in the slightest. For such a small car, the steering is light and effortless, allowing for the utmost of ease when tossing it around the city.

As we spent more and more time in the Mirage G4, we began to learn more and more about its appeal. The rear seat legroom surpasses the Yaris Sedan and all of the hatchback rivals, with four six footers fitting in the car (albeit snugly). Our SEL trim vehicle also came with a leather-wrapped steering wheel, shift knob, piano black interior trim, chrome interior door handles, and LED floor illumination. Fit and finish is up to par for this segment, but there’s no mistaking the G4’s interior for a premium vehicle. There are plenty of plastic materials used throughout the cabin, and some panel gaps are visible throughout. The rear seat design is an improvement from the hatchback’s flat third-world look, and the fabrics have some design to them. 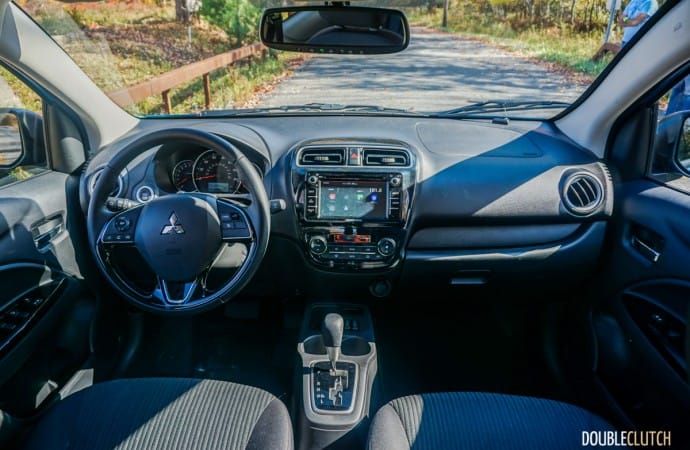 Other noteworthy features here are power windows and locks with remote keyless entry, a touchscreen infotainment system with Android Auto and Apple CarPlay, just like the Spark’s MyLink system. A rear view camera is also on board, along with automatic climate control, Bluetooth connectivity with streaming audio, and cruise control. Base ES models come with 14” wheels on wheel covers, but this SEL has 15” alloy wheels. No sunroof is available, but this standard feature suite is packed for a car at the $13-15,000 price point.

This would be great if the G4’s as-tested sticker hovered around that price range, but the SEL tester (the keen will observe that the photos say it’s an “SE”, because we tested a US-spec top-trim model) we spent some time with cost $18,298. This is a huge step from the $14,498 base model, which itself is priced about $2,000 higher than it should be. Even still, the G4 is cheaper than the fully loaded Yaris Sedan, but it must be taken into account that the Toyota’s Mazda-sourced interior and overall build quality is far superior. 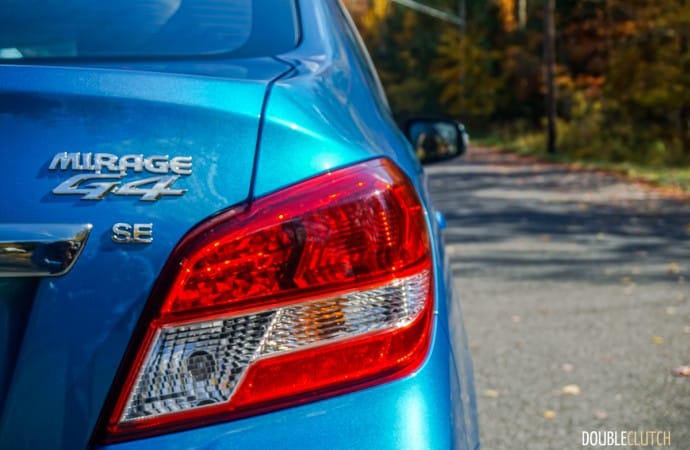 Mitsubishi rates the Mirage G4 with the CVT at 6.9L/100km in the city, 5.7L/100km on the highway, for a combined estimate of 6.4L/100km. Fuel economy is actually the entire Mirage line’s biggest strength, with the ability to just sip fuel conservatively regardless of what environment the car is in. Even better than the manual model at being frugal, we averaged just 5.9L/100km in a combined cycle throughout our test, and of course, the G4 sips regular 87-octane fuel. When driving around on city streets through traffic, the average never went beyond the 6.5L/100km mark.

The 2017 Mitsubishi Mirage G4 is an interesting proposition. Personally, if I were shopping in the affordable subcompact segment, I wouldn’t be looking for a sedan. Cheap, cheerful cars in my eyes require the versatility of a hatchback, great fuel economy, and preferably a manual transmission. The regular Mirage does all of these things just fine, and if dealers are offering incentives to bring the overall price down, that’s the direction I’d go. The Mirage G4 sedan’s only real appeal is the unbeatable Mitsubishi warranty and the fact that you’re getting into a brand new car – the price point really needs to be lower. 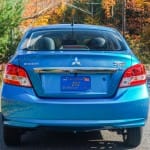 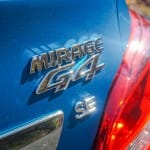 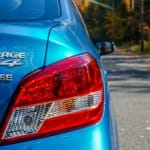 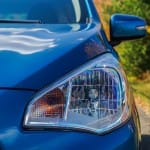 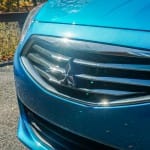 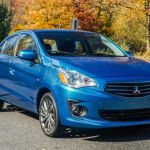 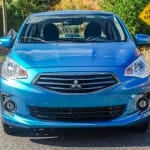 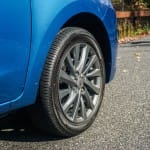 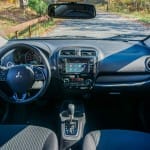 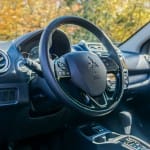 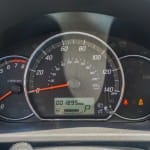 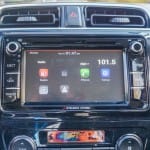 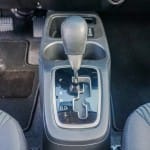 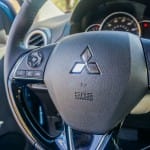 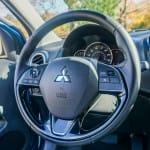