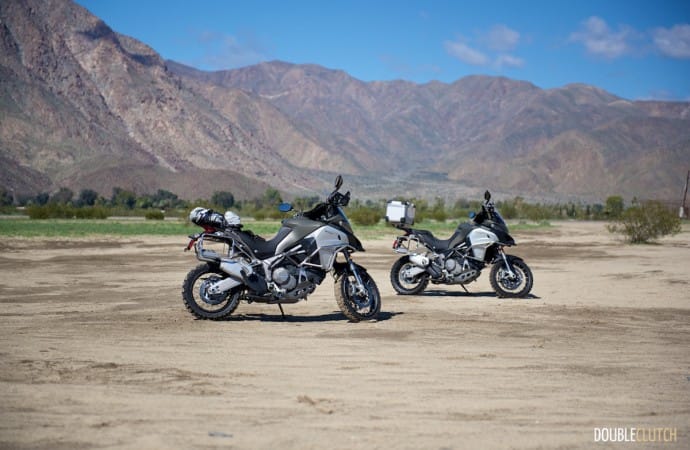 Worn, battered, and mildly bruised, our bodies were giving up, but the bikes still wanted to go.

The past week I found myself drawn back onto the intoxicating roads of California – although this time not necessarily just for the paved ones. This time, Ducati was kind enough to lend us a couple of the latest 2017 Ducati Multistrada 1200 Enduro models – the direct competitor to the likes of the BMW S1000XR (reviewed here). Given the versatility of the bikes we’d be on, we planned a five-day trek heading inland in order to truly test how well-rounded these bikes are.

Our route would start in Los Angeles, heading southwest to Anza Borrego before lapping the Salton Sea, and riding back northwest to Palm Springs, finally ending back in Los Angeles. So, after a five hour flight, a two hour wait for my luggage at the airport, and what seemed like 15 minutes of sleep, we hopped into an Uber and headed to Ducati to pick up the bikes.

As we pulled around the corner into Ducati’s media centre, the bikes were already outside waiting for us – 2400cc and 1132lb. of Italian goodness: two matching Multistrada 1200 Enduros. The first thing that struck me about these bikes is the sheer size of them. With a seat height of 890mm, a 159.4cm wheelbase, 40L of storage, a 30L fuel tank, and a curb weight of 566lb., the Multi Enduro isn’t small in any way. The bike definitely has presence when its alone, but two of them side by side practically eclipse the Prius C (reviewed here) we arrived in.

After a brief rundown on the different ride modes, suspension adjustments, and general controls, we started loading up our luggage into the hard cases. The system for this is simplistic but effective – a couple of locking latches on either end of each side case, allowing for complete removal of the lid, and another manual latching mechanism secures the cases to either side. No automatic locks, no complications. 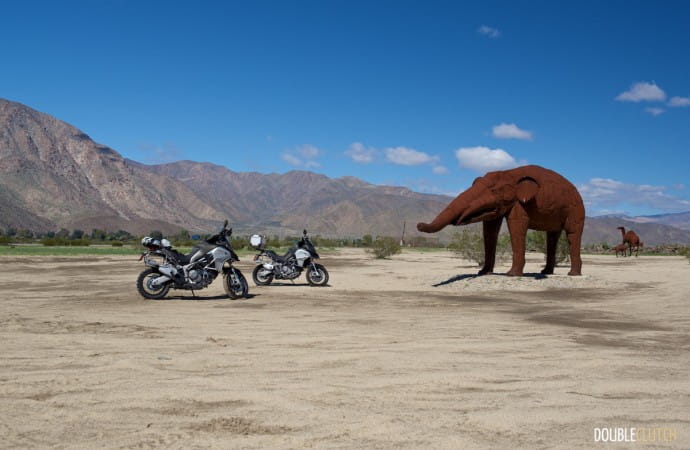 As we each toss our leg over the bikes the weight is very, very apparent. Even at 5’10 the Enduro is pretty hard to flat-foot for me, which makes the first few stops something I’m a bit anxious about. But no matter, we fired up the bikes and started to leave the parking lot, excited for our 130-mile ride to Anza Borrego, and then…rain. Lots and lots of it.

At first it seemed as if it would just be a drizzle, bound to subside just as quickly as it showed up. But the rain held fast, determined to help us test out the heated grips and traction control systems. The good news is, the grips worked fantastically, and the TCS just as well. In fact the bike held up really well in the rain, and despite trying to avoid it at all costs when riding regularly, we both had a ton of fun getting pelted with rain for two hours straight.

There weren’t any moments of apprehension at all, the bike was planted and entirely manageable even fully loaded, on knobby tires, and at highway speeds. 130 miles, and umpteen smiles later we were in Anza Borrego. We quickly tossed hairdryers in our boots and washed the ink off our hands from our soaked gloves in preparation for day 2.

Anza Borrego is essentially a desert surrounded by mountains in just about every direction except the east. Washes, rocks, and generally rough terrain made it the perfect spot to test out the off-road capabilities of the claimed Enduro, and that would be exactly what our second day would be all about. We woke up early, grabbed some chlorine-flavoured coffee from the hotel, and rode into town to grab some food and maps from the nearby visitor centre for the state park. The idea was to find a few relatively easy and forgiving trails to avoid having to pick up 550lb. of bike regularly.

After a few minutes of banter with one of the volunteers at the centre, we had a couple of easy route suggestions to try out – he was about 70, and claimed to ride them regularly on his own mountain bike. We rode a couple miles east to the first route, stopping to check out some of the massive metal sculptures that speckle the landscape in and around Anza. (A scorpion the size of a small house?!)

As we turned off the pavement, and into the wash, everything was going great. The heat seemed to have dried up much of the rain and the terrain was fairly forgiving at first. The suspension in the Multistrada soaked up the bumps with ease, occasionally hearing the crunch of the stock bash guard scraping as we crested some humps on the path. (I thought to myself how this could have immediately crippled the S1000XR, with its low oil cooler). The extra 31mm of ground clearance over the regular Multistrada certainly came in handy.

With the bikes in the Enduro ride mode the engine power gets reduced to 100hp, and the ABS gets dialed back, allowing you to completely lock the back wheel up if you so desire. We would soon find out that it would be difficult to get enough speed to make use of that capability… But for the first mile or so, we managed really well.

The Enduro chugged along with tractor-like torque, easily managing the low speed turns and twists as we navigated through the wash, and still giving enough power to quickly get up to speed and plow through the odd bit of sand on our path. Things were going great, the bike felt light and balanced once moving, even at low speeds, and the riding position was comfortable when standing. Then, we hit the muddy claylike crud that would instantly humble us.

Rain from the day before hadn’t really dried up it seemed, it was only hidden by about an inch or so of dry dirt, inconspicuously covering some really unforgiving heavy mud. The weight of the Enduro pushed the dry dirt aside, and the tires tore into the mud, almost instantly washing the front wheel out and nullifying the previously excellent traction. The tires gummed up completely, and being relatively novice adventure riders, we both started tipping over.

The bikes themselves handled the abuse really well for the most part, the tanks didn’t really scuff up, the cages held fast, and between the two of us, we were able to get the bikes back upright in mostly one piece. What didn’t hold out so well, was the hand guards. Unfortunately Ducati opted for plastic on these, which is understandable, but you just can’t get plastic strong enough to withstand 550lb. of bike every time.

About 2.5 miles into the trail, we turned back. Worn, battered, and mildly bruised, our bodies were giving up, but the bikes still wanted to go. Once we got back onto the pavement, I switched into the Sport riding mode, and used all 160hp to quickly fling the mud out of my tires as we blasted back towards town for a much needed meal and rest. The rest didn’t last long, and we ended the day off with a spirited ride through the mountain pass we entered the park through the day before, then retired to recharge for day 3. 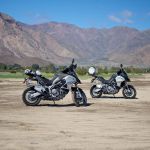 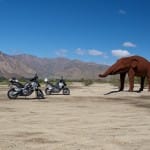