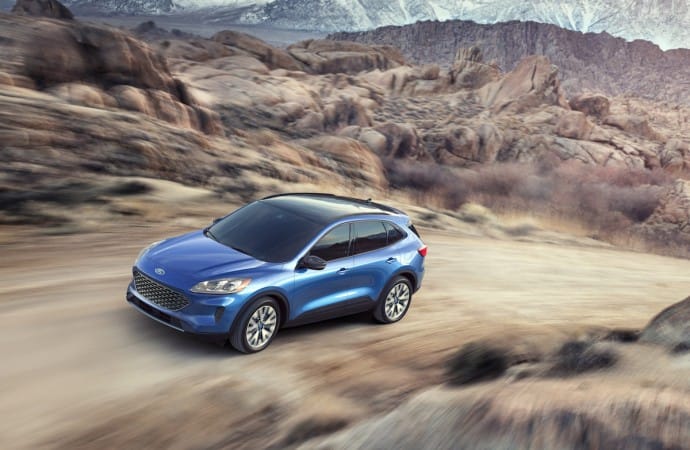 Efficiency is the name of the game when it comes to powering the new Escape.

Last year, Ford made a bold decision when they announced they were phasing out all passenger cars in North America save for the Mustang in order to focus almost exclusively on SUVs, trucks and crossovers. Now as the New York International Autoshow approaches, Ford has pulled the wraps off its latest entry into the compact crossover market, the new 2020 Ford Escape.

For 2020, the Escape adopts a more rakish form. A large grille set low-down on the front fascia sets the tone for a clean design with tightly-contoured sheetmetal and well-defined body cladding. Optional nineteen-inch wheels fill out the large, cladded wheel wells. The Escape’s tall, organic roofline can be topped by a huge available panoramic moonroof. Out back, the Escape name in large letters fills the space between the taillights while the lift-over lip for the cargo area is part of the unpainted plastic cladding, significantly reducing the risk of scratched paint from loading and unloading cargo. 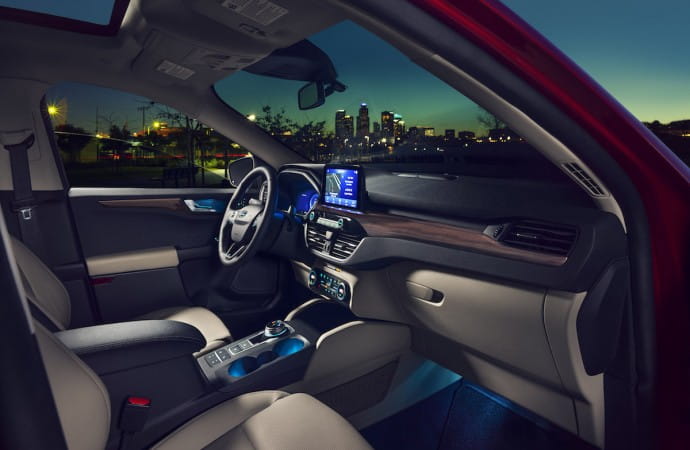 Inside, the new Escape is a textbook example of Ford’s new interior design style. The available Sync 3 infotainment system sits atop the dash, just out of the driver’s line of sight, while an available 12.3-inch digital gauge cluster adds a second large screen to the cabin. A heads-up display is available, as is a 575-watt ten-speaker B&O premium audio system. The Sync 3 infotainment system is compatible with Android Auto, Apple Carplay and Waze, and an embedded 4G LTE Wi-Fi modem is standard. A rotary dial shifter saves space in the centre console for versatile front cupholders, two for large soft drinks and bottles and one for a small can. When it comes to practicality, Ford has decided to make the rear seats slidable, allowing Escape owners to find a balance between rear legroom and cargo room that works best for them. Both rear legroom and cargo space are reduced on hybrid and plug-in hybrid models.

Efficiency is the name of the game when it comes to powering the new Escape. The base engine is a turbocharged 1.5-litre Ecoboost three-cylinder, similar to the one in the new not-for-North-America Fiesta ST. It’s projected to make 180 horsepower and 177 lb-ft of torque and can shut down one cylinder in steady-state cruising to save fuel. Also available is a 2.0-litre turbocharged Ecoboost four-cylinder engine, a conventional hybrid powertrain and a plug-in hybrid powertrain. Front-wheel-drive is standard and all but the plug-in hybrid are available with all-wheel-drive. A conventional 8-speed automatic is standard on Ecoboost models while both hybrid powertrains come with a CVT. All powertrains run on regular gas, although premium is recommended for the 2.0-litre Ecoboost in order to get maximum performance. 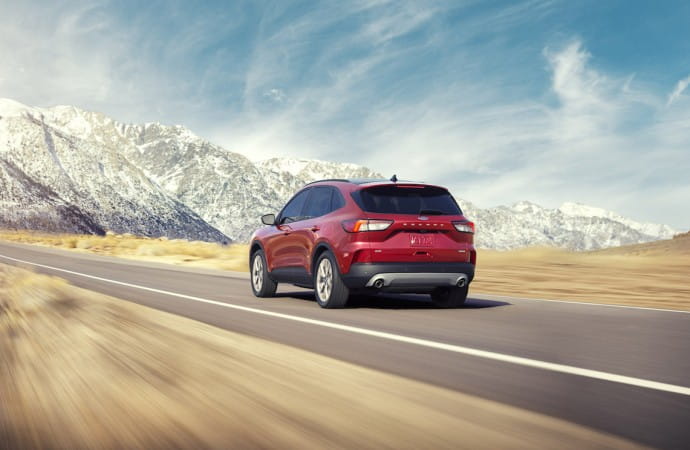 When it comes to active safety features the new Escape comes standard with Ford’s Co-Pilot360™ safety suite, while adaptive cruise control with or without lane-keep assist is available as an optional extra. Newly available is Active Park Assist 2.0 which allows for fully autonomous parallel and perpendicular parking, and Evasive Steering Assist which can detect obstacles and enhance steering response to help the driver avoid potential accidents.

The 2020 Ford Escape goes on sale later this year and will be available in Canada in S, SE, SEL and Titanium trim levels. Expect it to be priced similar to the outgoing model as value is a key factor in the compact crossover segment.