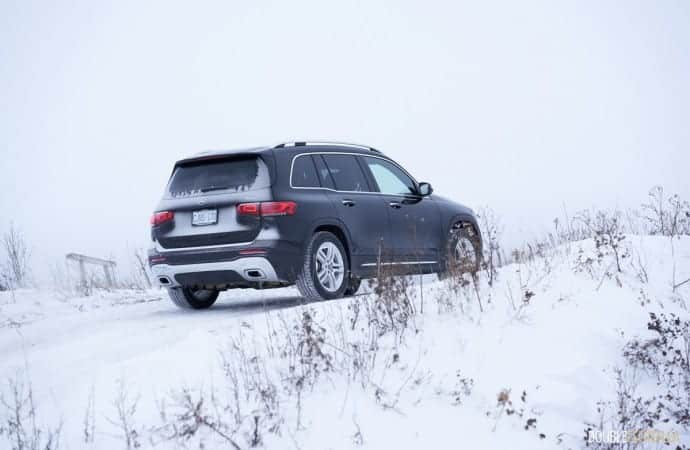 A ball knocked out of the park, definitely on its way to being a home run.

GIMLI, MANITOBA – Mercedes-Benz Canada recently invited us to Lake Winnipeg to sample the latest in their lineup in a multitude of settings. While a big part of this program focused on high-horsepower AMG products, a bonus here was the opportunity to sample the brand’s latest luxury crossover offering. We sampled the all-new 2020 Mercedes-Benz GLB 250 4MATIC in both on and off-road conditions, as well as in a closed-course autocross-style circuit. 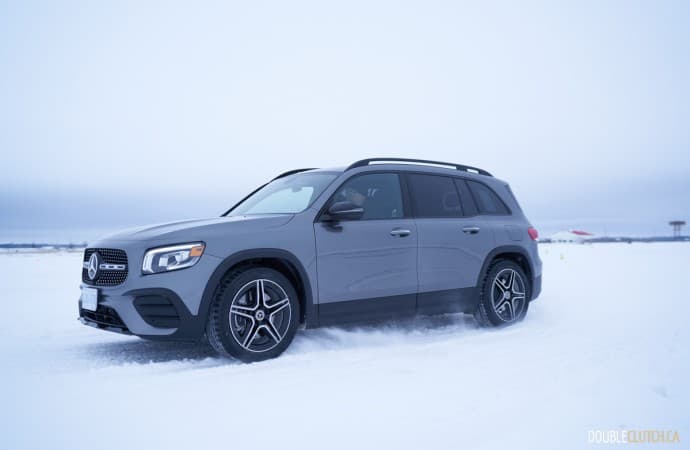 The GLB is in a bit of an odd place in the compact premium crossover segment, coming in below the GLC (reviewed here) and above the GLA. It employs traditional two-box crossover styling that’s squared off and aggressive, a bit of a deviation from Mercedes-Benz’s swoopy curves and moreso a homage to the infamous G-Class (reviewed here). The GLB is handsome and especially in the conservative paint tones displayed in our photo gallery, it stands out. The standard array of LED lighting, premium wheels, and AMG appearance packages is available, and the new GLB can be reasonably tailored to buyers’ needs.

Immediate rivals include the BMW X2, Land Rover Discovery Sport, and Lexus NX 300. However, the one area in which the GLB stands out over most of the competition is the availability of a third row. While tight, the GLB actually offers three rows of seating for seven passengers, a feature only the Land Rover can compete with. My six-foot frame can squeeze into the rearmost row if necessary, but truthfully, it should be relegated for children only. That said, until now in order to have three rows of seating from Mercedes-Benz or BMW buyers would need to spend at least $65,000 (often much more) to get into the likes of the GLE-Class (reviewed here) or X5. 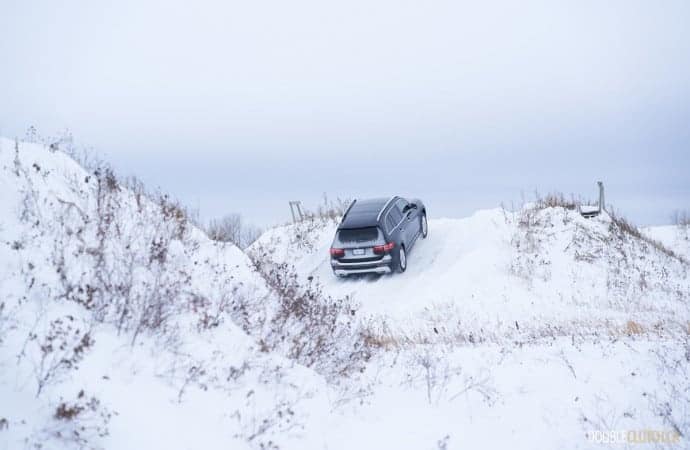 The GLB is currently offered in its standard GLB 250 form, though a hot AMG GLB 35 is supposedly on its way soon. The 250 tested here packs a 2.0-liter turbocharged inline four-cylinder engine, pushing 221 horsepower and 258 lb-ft. of torque. It’s a powertrain that’s dedicated to refinement rather than performance, and that’s just fine for what most buyers need. It accelerates to speed with ease in a relaxed manner, and the eight-speed dual-clutch transmission does a decent job ensuring you’re in the right gear.

Anything with a “B” moniker from Mercedes-Benz reminds me of the dreadful previous-generation B 250, which had a transmission that bucked like a bronco and the smoothness of my face if I haven’t shaved for more than three hours. As such, my expectations for the ride and smoothness of the GLB 250 weren’t high. Thankfully, I was proven wrong and the GLB 250 rides and shifts just fine. It doesn’t use air springs like more premium models in the Mercedes-Benz lineup, but the suspension setup is perfectly suited for the potholes and road imperfections on Toronto’s roads. 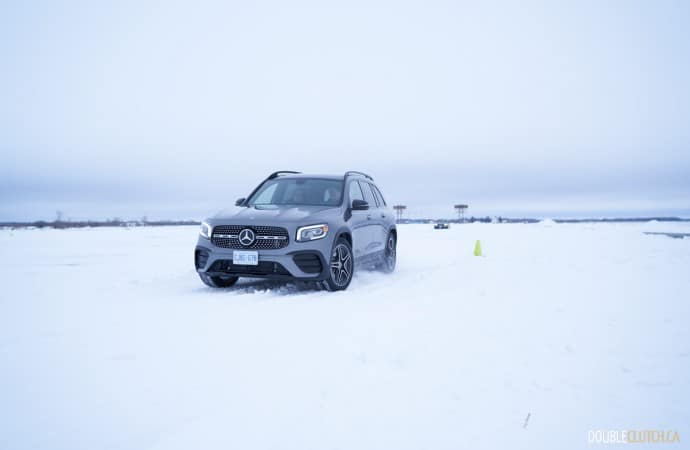 The GLB 250’s interior is the only area in which we came away a bit disappointed, especially considering the sensational job Mercedes-Benz has done on the new CLA 250 that we happened to have on test at the same time back home. While materials don’t exactly feel cheap by any means, there’s far too much piano black plastic, and boxy right-angles that will be dust magnets after a few weeks of regular use. The metallic trim on our test unit did look a bit low-rent and the car could benefit from being spec’d with matte wood as seen on the larger GLC, or even faux-carbon fiber.

As with everything else to come out of the three-pointed star these days, the center-point of the interior is the new MBUX infotainment, which is operated using a combination of a gorgeous touchscreen and touchpad. While it’s brilliant to look at and lightning-quick in its processing speed, MBUX is still a bit too convoluted and requires far too many inputs for simple tasks. Apple CarPlay and Android Auto connectivity is supported, but like the new GLE (reviewed here) and A-Class, it must be noted that wired connections will require a USB-C connection. Those of you still living in the, well, present, will require a dongle to connect your standard USB-A smartphone cable to the car. 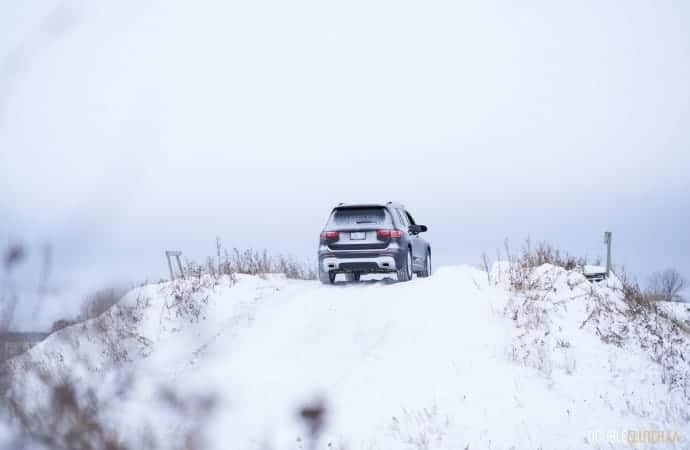 Behind the third row, cargo space is fairly limited but official capacity numbers have not been released at the time of this rear writing. Fold down those rear seats as we expect to the majority of the time and 1,755-liters of your precious cargo will fit. Mercedes-Benz Canada has priced the GLB 250 at an aggressive $43,990 to start. As expected a series of packages and standalone options are available to make the vehicle your own. Most examples carried by dealerships will have at least one or two basic packages optioned already.

When looked at contextually, the new 2020 Mercedes-Benz GLB 250 4MATIC is a ball knocked out of the park, definitely on its way to being a home run. It’s giving buyers the space and versatility that they need, at a price point more reflective of two-row subcompact crossovers that offer much less. It’s not perfect, but even when comparing to fully loaded versions of similar mainstream offerings factoring in the price differential, the GLB 250 comes in at an excellent value. While the GLA and GLC are the small crossovers many think they want, the GLB is the one that most Canadians need. Now, about that AMG model… 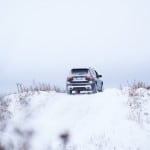 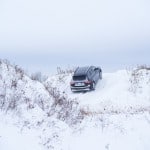 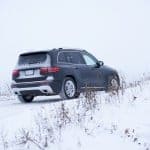 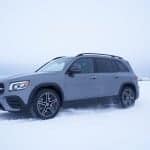 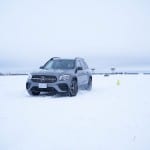 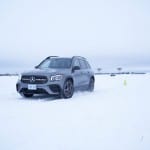