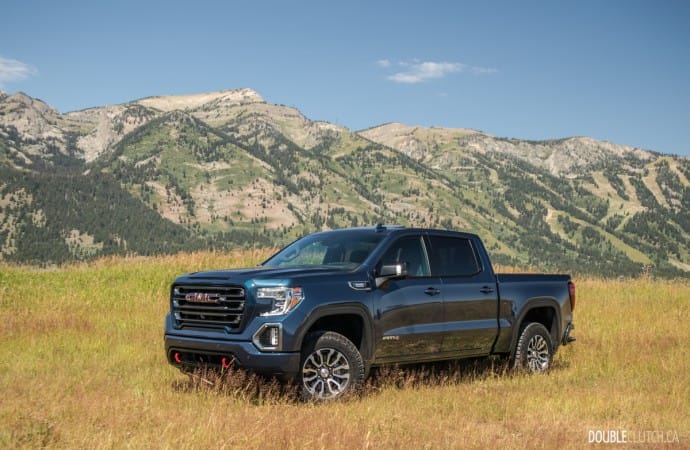 An engine that feels nothing like the diesels of the past.

JACKSON HOLE, WYOMING – Roughly five years ago, Ram changed the light truck game with the introduction of their efficient EcoDiesel powertrain. It was an Italian-built unit by VM Motori, and later was also offered in the popular Grand Cherokee. Since then, Ford and General Motors also brought diesel variants to their truck offerings, though the GMC Sierra and Chevrolet Silverado were devoid of this option – until now. We flew to Jackson Hole, Wyoming to sample the all-new 2020 GMC Sierra Duramax and evaluate how it fares against its Ford and Ram counterparts. 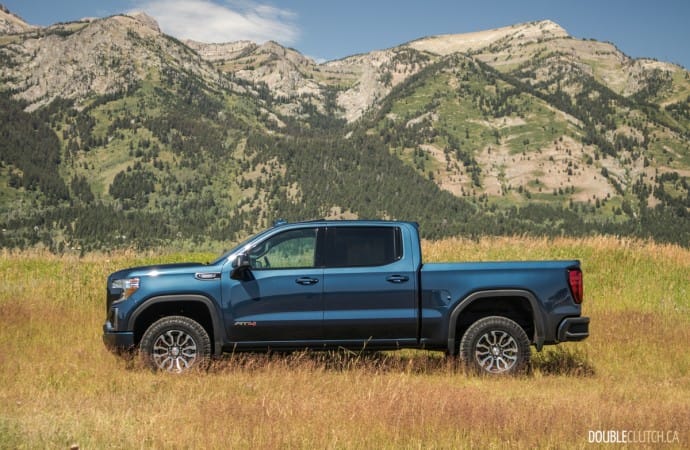 Ford’s Power Stroke diesel is one that we have come to like in the F-150, though real-world economy isn’t quite as good as it could be. The last Ram 1500 EcoDiesel we sampled, albeit the previous-generation model, returned highway mileage as frugal as 8.0L/100km when unloaded. We can only imagine the forthcoming redesigned model will deliver superior numbers to this. Until the introduction of the new Duramax for the 2020 model year, the only light-duty diesel offered by GM is in the Canyon (reviewed here) and Colorado, which is a segment-exclusive option.

The new Sierra is a spectacular truck, with features not seen anywhere else in the class such as the CarbonPro bed, MultiPro multifunction tailgate, and ProGrade Trailering System. The CarbonPro bed is the first carbon-fiber truck bed to be offered at the manufacturer level, and offers rigidity and strength not seen anywhere else. The MultiPro tailgate allows the tailgate to be opened in a variety of ways, including a step for easier access into the bed as well as a Kicker audio system for outdoor adventures. 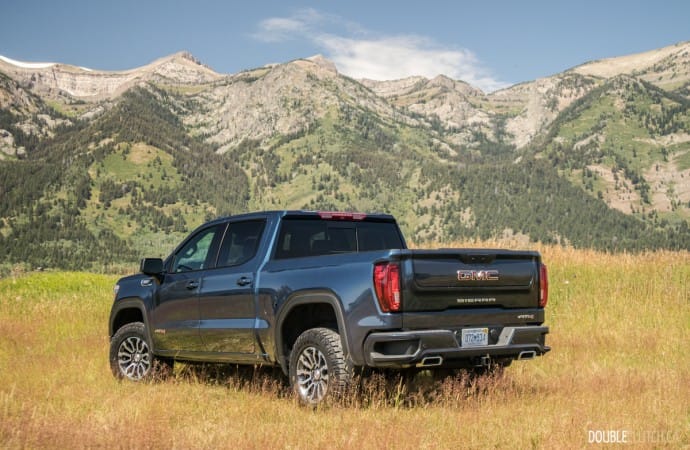 Under the hood, the 3.0L Duramax inline six-cylinder diesel is an engine that feels nothing like the diesels of the past. With a variable-geometry turbocharger, there’s minimal clatter, no smell, and objectively better response. Some turbocharger lag is evident off the line, but the 460 lb-ft. of torque right at 1,500RPM comes on quick and pulls the Sierra 1500 like a freight train. Peak horsepower is a humble 277, but by no means does this truck feel slow. It’s not quite as urgent as the 6.2L V8 also offered (reviewed here), but response is decent and it’s overall a nicely buttoned-down engine.

The only gearbox offered in this application is the 10-speed automatic, which is quickly becoming one of our favourite conventional automatic transmissions. In the Sierra it also has a torque converter with a mass damper. It can be shifted manually as well, but it really is best to leave the transmission alone to its own accord. Out on the hilly mountain roads of Wyoming, the Sierra AT4 we drove handled the test wonderfully, with a quiet demeanour and effortless operation. Ride quality is also among the best of the 1500-series trucks, though the Ram with its optional air suspension is hard to beat in this regard. 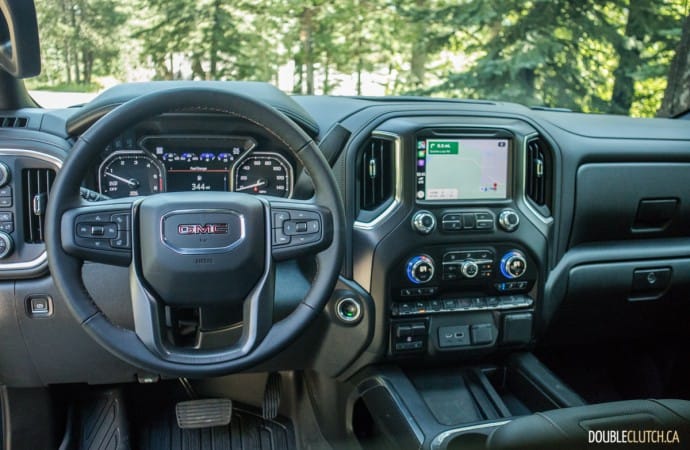 The diesel variant of the Sierra 1500 is capable of towing up to 9,100 pounds in its optimal configuration, and hauling a maximum payload of 1,830 pounds. Noteworthy features on this model also include a diesel exhaust brake system that we found quite effective in the mountains, and an engine start/stop system with the ability to disengage it. We look forward to spending a full week with the Sierra Duramax later this year to dig deeper into this powertrain and learn more about its real-world viability.

Other updates to the 2020 Sierra lineup include adaptive cruise control, trailer tow mirrors as a standalone option, Enhanced ProGrade Trailering System and more. An update to the ProGrade Trailering includes a “transparent” trailer view, which stitches together images captured by multiple cameras to create for a see-through effect to the trailer. Pricing for the 3.0L Duramax is a $3,135 option on Elevation, AT4 and Denali trims, slotted above the 5.3L V8 (also now available with the 10-speed). 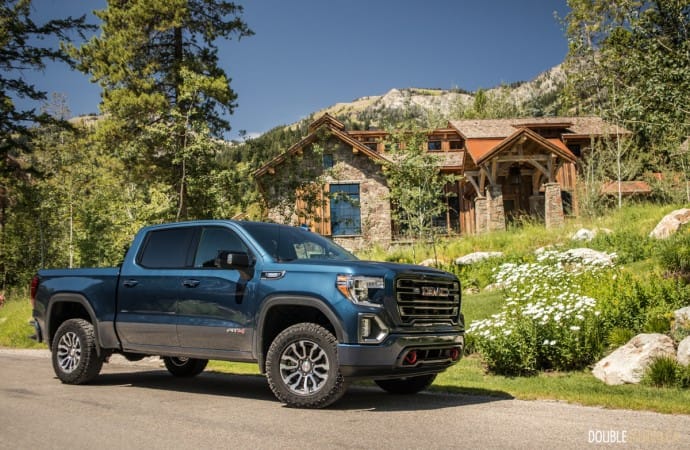 Now that the diesel option has joined the lineup, the 2020 GMC Sierra family really does have a truck for just about anyone. With the versatility of one of the most rigid beds in the business, and one of the most concise interior designs, it’s hard to find fault with the new Sierra. Between the Sierra and its sibling, the Silverado (reviewed here), it really boils down to personal preference. Regardless, we would strongly recommend the GMC over its aging Ford counterpart, and would strongly encourage a test drive to determine which truck is right for you. 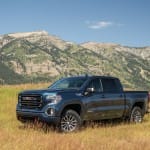 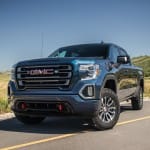 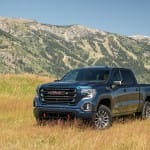 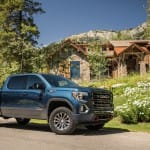 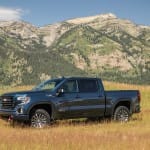 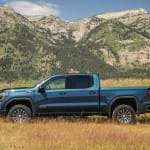 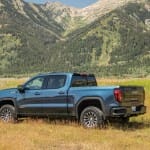 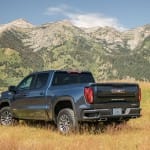 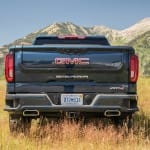 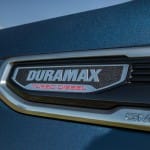 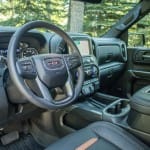 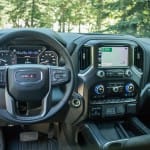 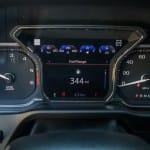 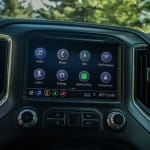 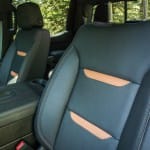