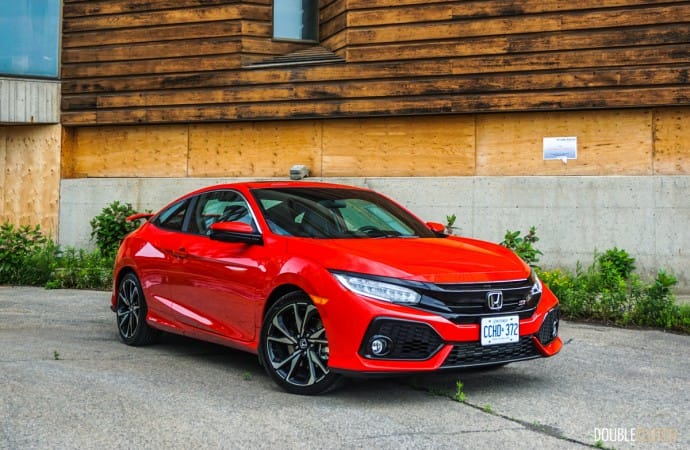 The Civic Si has, in recent years, gotten a ton of slack from both enthusiasts and media outlets.

MONT-TREMBLANT, QUÉBEC – After almost two entire years since the launch of the latest tenth-generation Honda Civic (reviewed here), the lineup is now fully complete. Starting at just $16,490 for the base Civic Sedan, the affordable and cheerful family goes up to $40,890 for the decked-out Type R (reviewed here). The Civic is available in coupé, sedan, and hatchback forms, with engine choices from the base 2.0L K20, multiple versions of the turbocharged 1.5L four, and the range topping 2.0L turbo-four. During a launch event for said Type R, Honda Canada surprised us with something else exciting – we were tossed the keys to a 2017 Honda Civic Si Coupe for a two hour stint from downtown Montréal to the hillsides of Mont-Tremblant. 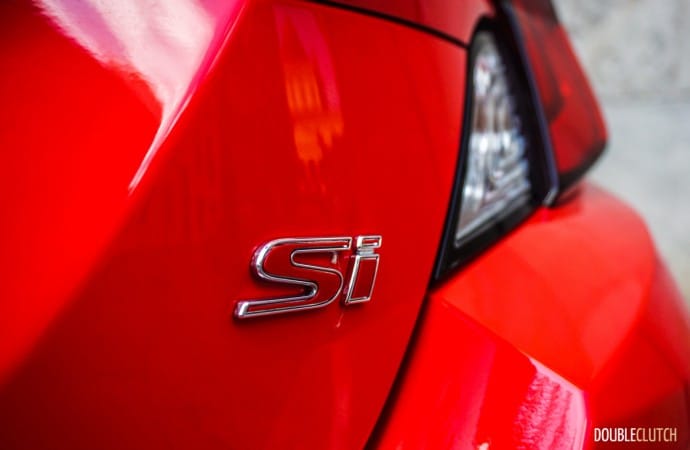 The Civic Si has, in recent years, gotten a ton of flak from both enthusiasts and media for being “just not good enough”. I’ve taken personal issue with this, as a lot of it is armchair critics judging it blindly from the numbers rather than the overall driving experience the car offers. Cars like the Ford Focus ST, Volkswagen GTI and Subaru WRX are more powerful, but also have price tags that reflect this additional performance. The last Si Coupe we tested (reviewed here) sat at $26,850 and could only be had fully loaded.

Fully redesigned and based on the tenth-generation Civic platform, the new Si costs $28,890 for the coupé and $28,490 for the sedan (my personal pick, for added practicality and less of the boy-racer look). It’s not available in hatchback form; that tops out at the Sport and Sport Touring trim levels, with the exception of the Type R. Aside from performance goodies, the Si comes with 18” alloy wheels, heated sport seats, wireless charging, and navigation as standard equipment. It also offers a 452-watt sound system with ten speakers, a 7” touchscreen interface, dual-zone automatic climate control and an intelligent key. 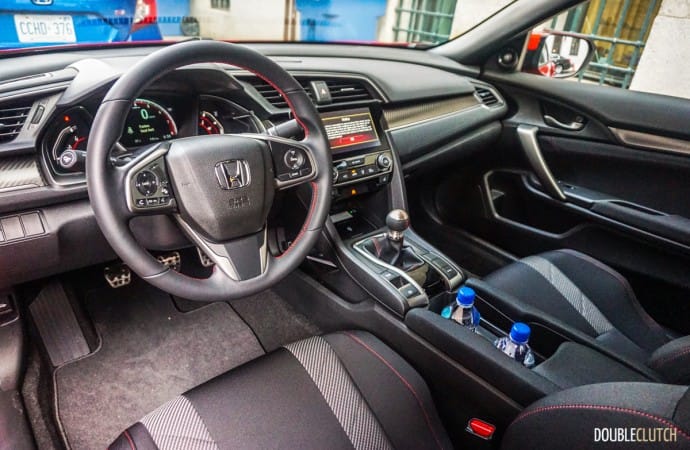 Enough about standard features though – those who prioritize toys buy the Civic Touring (reviewed here), a great value at its price point if performance isn’t the key priority. The Si is one step down from the Type R, and packs a 1.5L turbocharged inline four-cylinder engine. It’s the same essential block as the regular Civic, but boost has been cranked up to offer a peak of 20.3psi of boost. Output is 205 horsepower at 5,700RPM, and 192 lb-ft. of torque between 2,100 and 5,000RPM. Many of us hoped that the Si would get numbers in the 230-250 horsepower region, but I suppose that’s what the Type R is for, and also would have upped the price dangerously close to $30,000.

The only transmission offered on the Civic Si is a six-speed manual, with the same metallic-finish shift knob seen on the previous car. It’s a joy to use, with perfect throws, excellent shifter action, and a delightfully predictable clutch. This is one of the best manual transmissions in the industry right now, bar none. The additional torque on this new motor is graciously welcomed over the previous car’s 2.4L i-VTEC motor, and it produces plenty more gusto on the lower end of things. 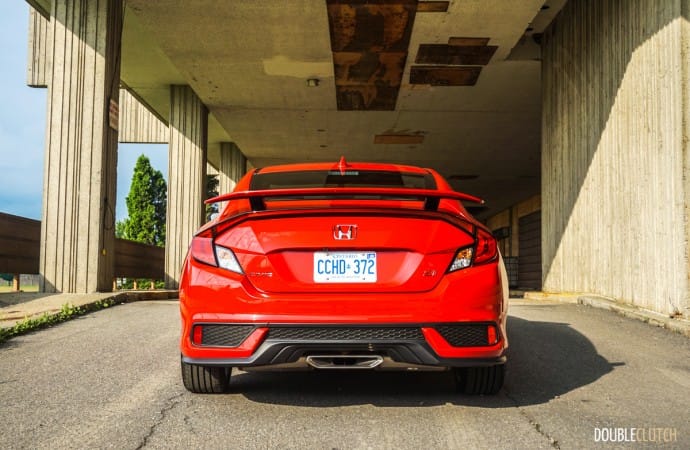 There’s a bit of a problem though, and it’s an area in which the old K24 excelled – it’s just not as much fun to wind this motor right up to 6,000RPM like the last car eagerly did. The new Si will still do it, but it’s happiest between 3,500 and 5,000RPM, where it’ll scoot on to deliver whatever is asked of it. It’s a different personality, one that Honda purists may initially take issue with, but the motoring world is evolving and cars like this are at the epicenter – you know; cars that people actually buy. The power band is different, and at no point is there a shortage of passing power in the Civic Si. The spec sheets may suggest otherwise, but this car is more than competent for what buyers want in this category.

Much like all sporty Hondas, the Si begins to surprise further and further as you begin carving corners. The chassis of the tenth-generation Civic is something well worth writing home about, and impresses with balance and overall body control. Stopping power is very good as well, with 12.3 inch brake rotors up front and 11.1 in the rear. Buyers will also be pleased to see that there is a helical limited slip differential, definitely a plus point in this segment. 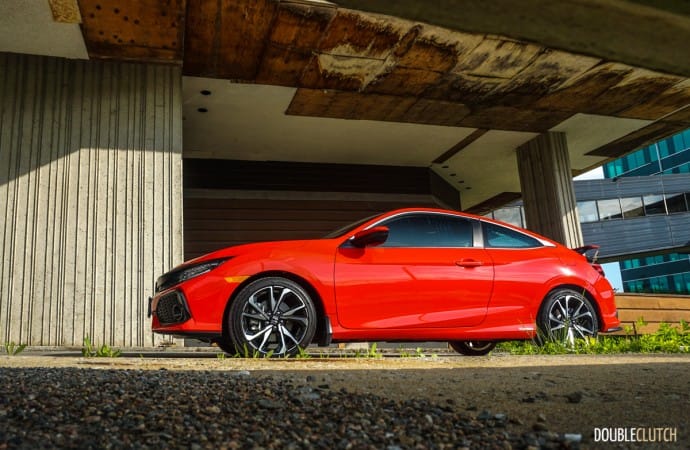 Other than the turbocharged motor, there is another feature that is a first ever for the Civic, and an exclusive in the segment where the Si plays. This car comes with an adaptive damper system that adjusts with activation of the “Sport” mode. Rather than just adjust steering weight and alter throttle mapping, Honda has implemented a solenoid that controls the dampers. The result is a perfectly planted car at any given time. We didn’t notice a drastic change in damping between normal and “Sport”, but the Si rides firm in a very positive manner all of the time.

Two very easy targets for the Si are also brand new for the 2017 model year; the Hyundai Elantra Sport (reviewed here) and the Nissan Sentra NISMO. Both cars offer similar power numbers, manual transmissions, and equipment levels at similar price points. The Hyundai can be had for as little as $24,999, but lacks a lot of the features standard on the Civic Si. Nissan offers the Sentra NISMO at $25,698, and it’s indisputably less fun to drive than the Honda as well. 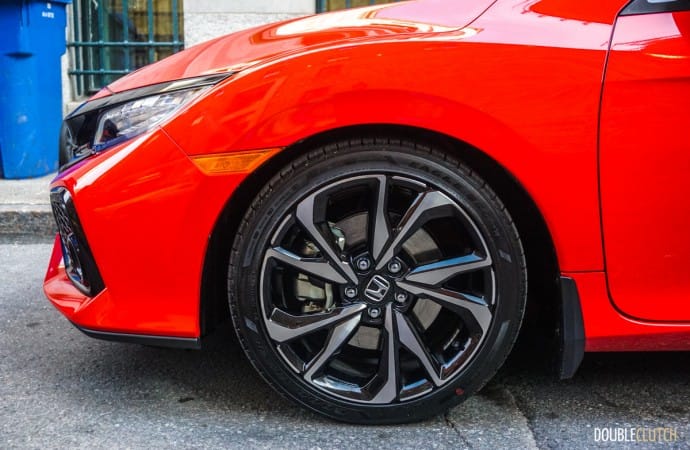 On top of the other benefits, the Si is rated at 8.2L/100km city and 6.2L/100km highway, sitting at 7.4L/100km combined when on premium fuel. This may not be the hottest performance car out there, but it’s one of the most fun-to-drive daily drivers available. When in sedan form, the 2017 Honda Civic Si packs tons of practicality along with a driving experience that even the most stubborn purist will love. The car sells itself, provided it’s given a proper test drive. 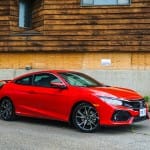 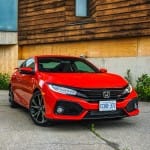 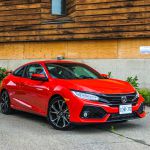 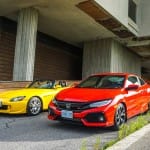 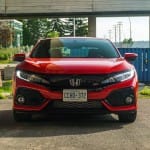 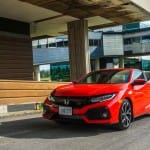 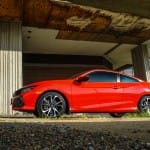 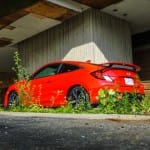 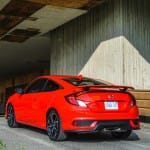 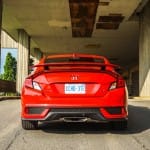 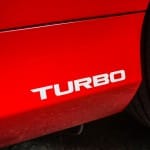 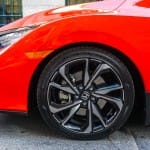 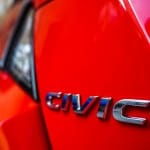 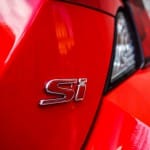 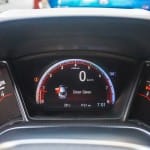 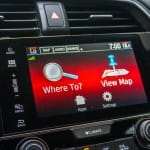 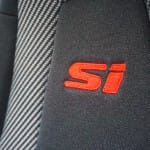 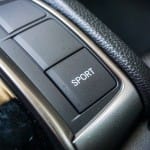 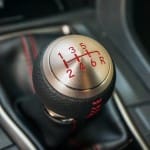 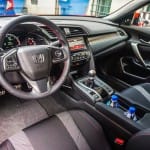