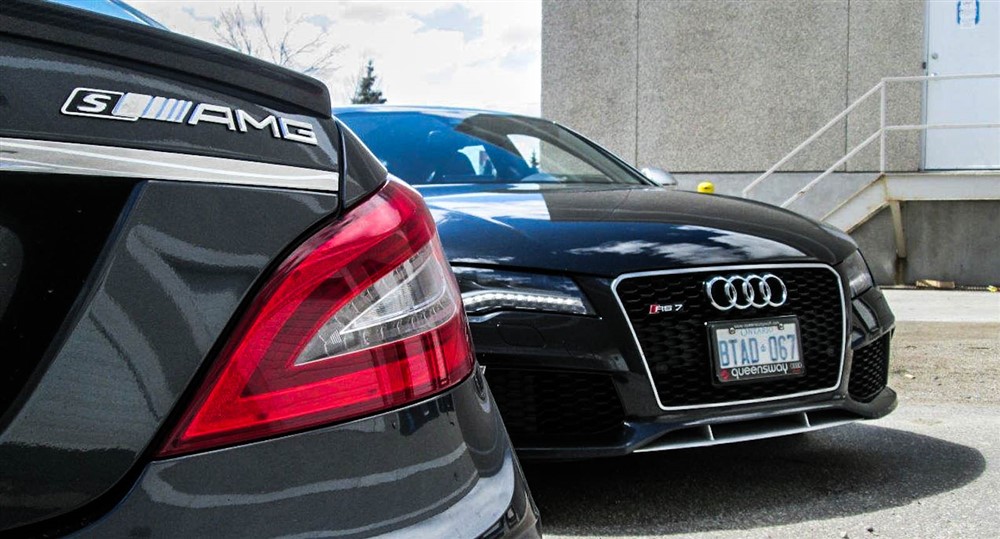 Eight doors. Sixteen cylinders. Four turbos. |
Four-door luxury “super-coupés” are a new trend in our market. Some people agree with them while certain purists don’t.

Four-door luxury “super-coupés” are a new trend in our market. Some people agree with them while certain purists don’t, arguing about the technical definition of the term “coupé”. One thing is for certain though; they’re here to stay. While the BMW 6-series Gran Coupé is an easy winner if all you’re doing is looking at how gorgeous it is, the M6 model I tested last summer was bested by the arrival of the Audi RS7. We decided to put our two favourites in this new segment, the 2014 Audi RS7 and the 2014 Mercedes-Benz CLS63 AMG-S against each other to see how they stack up in a comparison test setting. 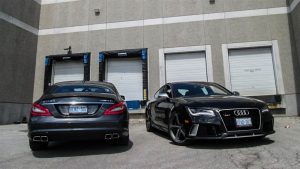 With four of us out there testing, we couldn’t break the tie as to which of these two beauties is actually the better looking one. The RS7 has sharp, elegant lines that stand out in a crowd, whereas the CLS63’s mean face and black wheels are unmistakable as an AMG-powered brute. The CLS has touches like the carbon-fiber rear lip spoiler and the huge, bright red brakes.
Interior styling and layout was an even split as well; the Mercedes has a ton more features that look superb (such as the IWC clock in the center of the dash) but nothing is all that easy to use. The Audi wasn’t equipped with as many toys as the CLS, but the interior layout is gorgeous. 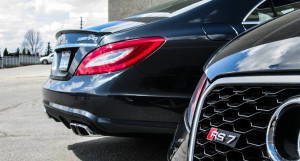 It’s not even a question as to which car sounds better – the 5.5L twin-turbocharged V8 in the CLS sounds monstrous at the push of the Start/Stop button. The Audi’s 4.0L twin-turbocharged V8 also sounds very good, and the ZF 8-speed automatic sounds like a dual-clutch on downshifts. The RS7 comes with the “snap, crackle, and pop” that enthusiasts love.

Other publications have gotten the Mercedes-Benz to 60 mph in 3.2 seconds and blasting through a quarter mile in 11.6 seconds. The best numbers I’ve seen for the RS7 are 0-60 in 3.3 seconds, though it hits the quarter mile mark a bit faster at 11.5 seconds. These cars are simply animals – those are supercar numbers.

Fuel economy and comfort aren’t to be taken lightly. Buyers of these super-coupés opt for these models over the Italian brutes because they want the ability to drive their 550+ horsepower cars to work and back every day. Even with its Stop/Start technology and available “Eco” mode, I couldn’t get the Mercedes to do any better than 13.5L/100km. The Audi lacks any kind of efficiency-maximizing tools (there isn’t even an “Eco” setting), but is able to achieve as low as 8L/100km on the highway. Both cars were fed 91-Octane fuel.

The ride on the Audi is noticeably superior too. Audi Drive Select allows you to select “Comfort” and soften up the suspension. If left in “Dynamic”, it does become a little too firm for daily use. Mercedes-Benz is still the creature-comfort king – it’s hard to go wrong with a seat that massages you as you sit in rush hour traffic on the 401. The seats on both cars are extremely comfortable – the CLS63 has adaptive seats that actually bolster/inflate one side to hold you in place while cornering. It’s an excellent concept when having some fun in a track setting, but for daily use, it can become a little bit gimmicky. 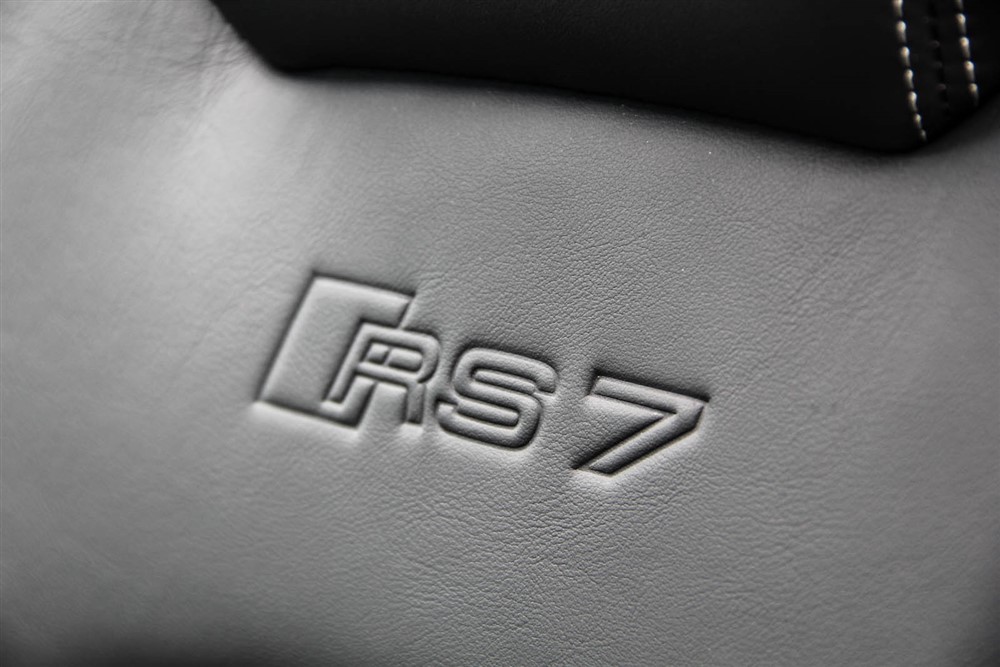 The numbers are pretty close. The Mercedes puts out 577 horsepower and 590 lb-ft of torque (up a handful of horses and foot-pounds from the regular CLS63). Audi’s magic numbers are 560 horsepower and 516 lb-ft of torque. Both cars have all-wheel-drive, and both systems are proven. Even with the added weight on the AMG-S model, the Benz weighs 4355 lbs, while the Audi weighs 4398. As-tested price on the RS7 is around the $130,000 mark, and the Mercedes comes in at $127,000. The prices are easy to get closer to one another, a couple option boxes here and there will do the trick.

Even though the Audi is down on power as well as torque as well as a bit heavier, it holds its own. In fact, the seat-of-my-pants dyno would lead me to believe that the RS7 actually feels a bit faster than the CLS63. The excellent ZF transmission helps with this; the Mercedes’ multi-clutch Speedshift 7-speed is pretty good but doesn’t feel as snappy as the Audi’s 8-speed. 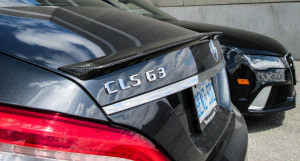 The RS7 is a fresh face to the market that enthusiasts can’t stop checking out. We’ve all seen the CLS – we know it’s sexy, we know it’s fast and we know it’s been around for a while. The AMG button on the dash is pretty tempting to push, and the results are rewarding, but the snarl of the Audi on startup is equally promising.

We’ve never really had a comparison test where both cars come out as clear winners. Based on the statistics of this comparison, the Audi has a slight edge over the Mercedes, but that’s just how the numbers play out. The CLS has been a car-crush of mine ever since the first-generation was unveiled in the mid 2000s. It was a car that I wasn’t sure would age well, but it turned out it wasn’t a fad. The original Mercedes-Benz CLS500 was a car that started a revolution of the sexiest four-doors available on the market. 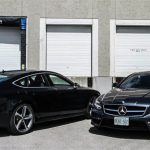 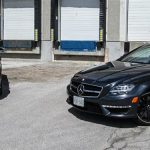 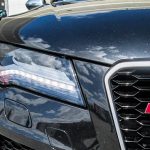 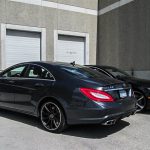 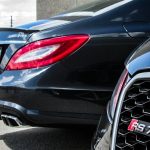 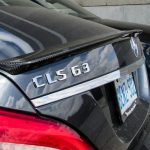 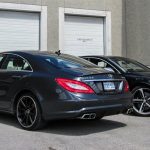 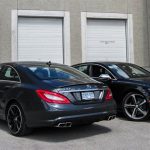 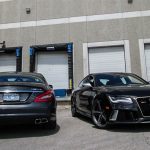 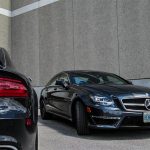 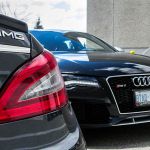 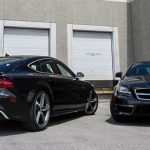 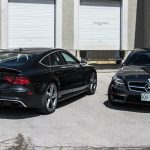 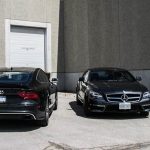