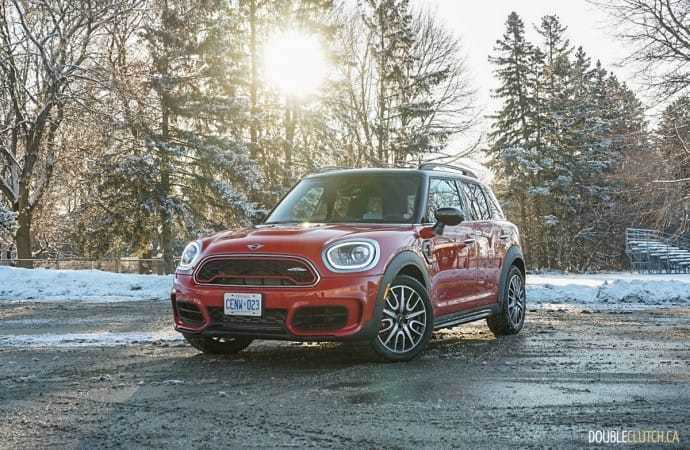 A real fire cracker with enough practicality for all your daily needs.

The 2020 MINI John Cooper Works Countryman ALL4 has become quite the ironic vehicle. The Countryman is the crossover of the MINI line up and has grown even bigger for its second generation. Earlier on, it was still one of the smallest crossovers available. Now, the Countryman shares a platform with the BMW X1 and hence has a similar footprint; no longer the miniature SUV it used to be. With the increase in size, MINI decided that the performance version of the Countryman was lacking some “oomph”. For 2020, MINI gave the JCW Countryman major updates to turn it into a fire breathing, winter slaying weapon. 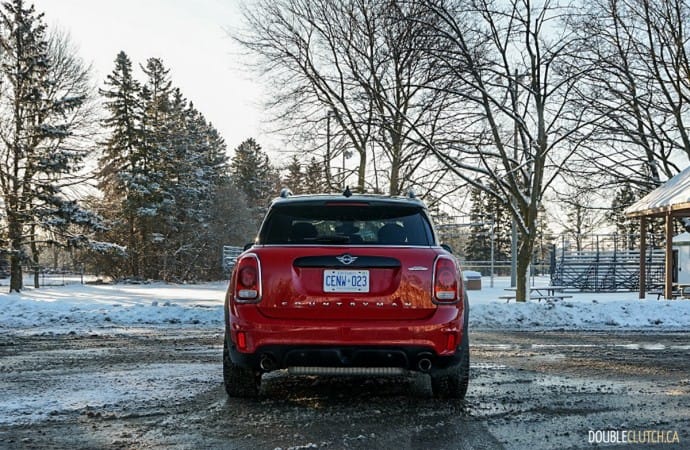 In 2020, the John Cooper Works (JCW) Countryman has not received any real exterior updates. It still has the iconic MINI look with large headlights and grill that looks like an intense frown with bearing teeth. The hood has a mound in the middle like a Chihuahua flexing its muscles. The front bumper has functional vents and air channels for cooling and aerodynamics. Our tester came in Chili Red which really suits the character of the car. The Countryman retains very classic MINI proportions with an upright windscreen and boxy lines. The wheels are pushed out to all four corners with minimal overhang. The 18-inch two tone wheels give a sporty appearance, too.

The big change for the JCW Countryman is in the powertrain. It is now powered by a potent 2.0-liter engine that’s been heavily redesigned with a TwinPower Turbo and reinforced internals to generate an impressive 301 horsepower between 5,000 to 6,250RPM. It also pushes 331 lb-ft. of torque between 1,750 and 4,500RPM, a significant increase over the previous engine. Power delivery feels abrupt with a surge of power where the turbo kicks in. The new engine is mated to MINI’s eight-speed Steptronic sports transmission with paddle shifters for manual control. 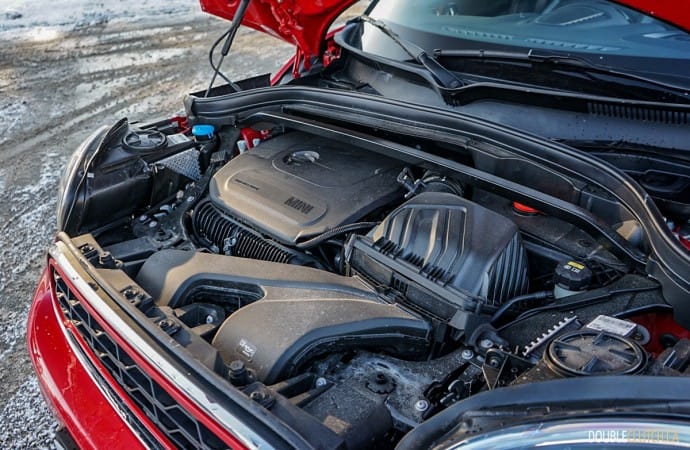 The transmission does a good job of keeping you above 2,000RPM for great response while the turbo is spooling. The drivetrain also has launch control to maximize traction off the line. All of these improvements combined allow the JCW Countryman to achieve a 0 to 100 km/h acceleration time of 5.1 seconds. To ensure the MINI can use the added performance repeatedly and reliably, significant work was also done to optimize the cooling system including adding two external radiators, high capacity cooling fans and separate cooling for the transmission. MINI is serious about the JCW Countryman’s track performance.

As you would expect from any MINI product with a JCW badge on it, handling is sharp. Steering is responsive with solid on center feel. The ride is quite stiff even in the “Mid” setting. Sport mode stiffens the dampers even more as well as sharpening throttle response for a very performance oriented drive. The ALL4 all-wheel drive system in conjunction with the mechanical differential lock in theory should give the Countryman unlimited grip. However in practice, the front wheel biased system causes the Mini to understeer first, and the ALL4 system kicks in to push the MINI back on track. 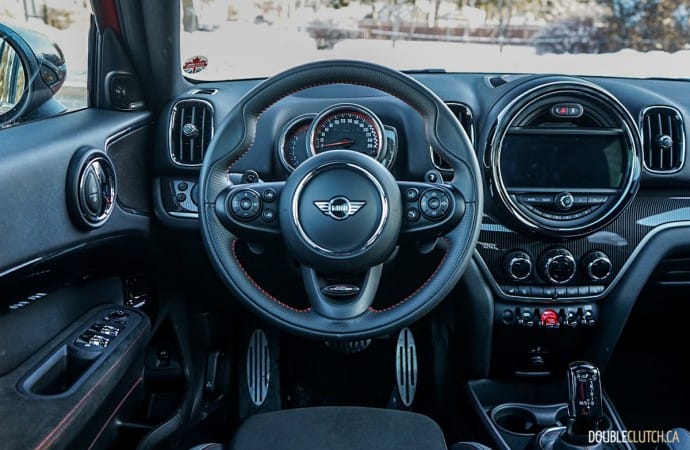 The system works effectively but feels unnatural. Interestingly in snowy surfaces, the system reacts more naturally. The Countryman’s growing size can be clearly felt as well, since the higher seating position exaggerates any body motion. You need to respect its weight when chucking it into a corner, as the MINI will take that corner fiercely and slingshot out at the other end.

One of the benefits of a compact crossover is retaining efficiency. The JCW Countryman is rated at 10L/100km city and 7.8L/100km highway for a combined consumption of 9.0L/100km. These are extremely impressive ratings for the level of performance you get. Our real world consumption rating with mostly city driving was at 10.8L/100km. With more restraint and use of the “Green” mode the published ratings are very attainable. 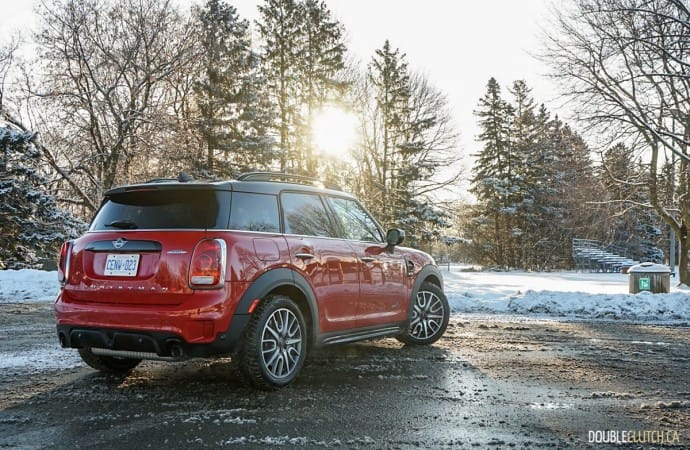 Similar to the exterior, MINI has stuck to its traditional formula on the interior design. You still get the large circular infotainment screen in the middle. The tachometer feels like an aftermarket add-on to the dash, and materials used are good but not spectacular. The door panels and seating get suede padding but it feels like thin suede. The seating would’ve benefited from using more leather instead of a suede, cloth and leather combination. A toggle switch on the center console for engine start is very well executed for an eventful start up every time.

The infotainment is pretty much BMW’s iDrive re-skinned with a brighter and more fun design. It is very easy and intuitive to use. Apple CarPlay helps to enhance the connectivity experience, but unfortunately Android Auto is not available. The seats are very supportive without being intrusive and gives the interior a performance oriented feel as well. Rear legroom is surprisingly good, and the rear bench can slide forward to increase cargo space. Capacity is a healthy 450-liters and grows to 1390-liters with the rear seats folded. It is without a doubt that the Countryman is the most usable MINI in the range. 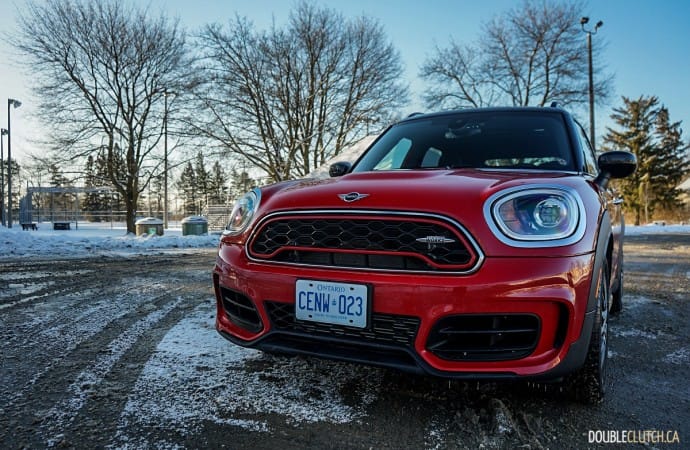 The MSRP for the JCW Countryman is $43,090, with our as tested price at $53,530. At a $10,000 premium, our tester comes with the Premier Package, Dinamica/leather combination seating, Driver Assistance Package and dynamic dampers. The $5,000 premier package adds important features such as panoramic sunroof, heated seats, heads up display and navigation to name a few. A $1,000 drive assistance package adds Person Warning, Approach Control Warning, speed limit limit info and high beam assistance.

The world of compact performance crossovers is still very small, though growing steadily. Options are limited to two main competitors for the JCW Countryman. One being its mechanical twin the BMW X2 M35i (reviewed here), starting at $52,454. The X2 is a much sleeker design with a more car like lower seating position. Then there is the Mercedes Benz GLA45 AMG on an aging platform at the end of its life cycle. However its performance far exceeds the MINI and the BMW. The Mini JCW Countryman is the best value in terms of all around practicality and price.

The 2020 MINI John Cooper Works Countryman ALL4 is a fire cracker with enough practicality for all your daily needs. The ALL4 all-wheel-drive system can handle any type of inclement weather you can throw at it. This model really appeals to young parents who need the practicality but want an injection of fun in their drive. The Countryman is not perfect but dishes out loads of style and fun to make you quickly forget its flaws. 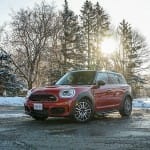 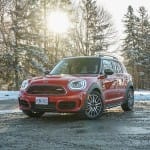 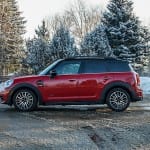 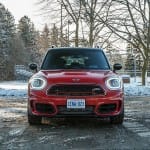 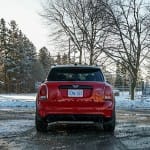 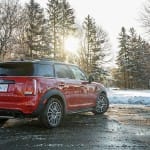 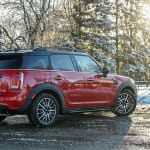 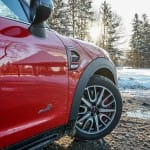 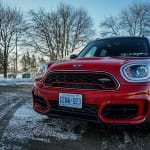 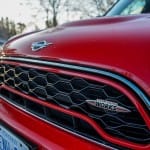 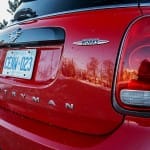 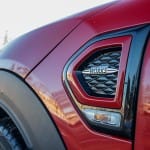 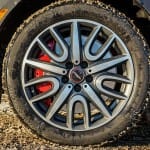 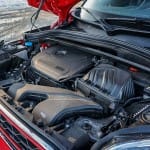 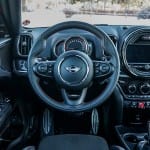 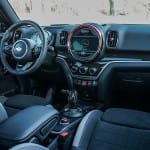 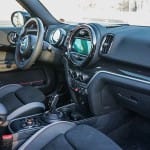 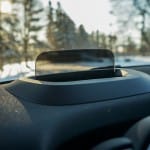 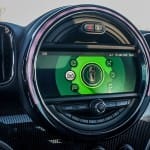 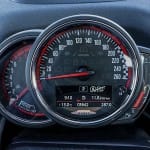 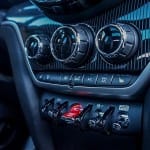 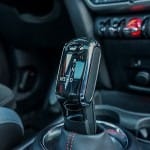 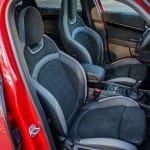 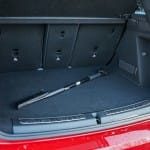 DoubleClutch.ca Podcast - A Night at the Movies