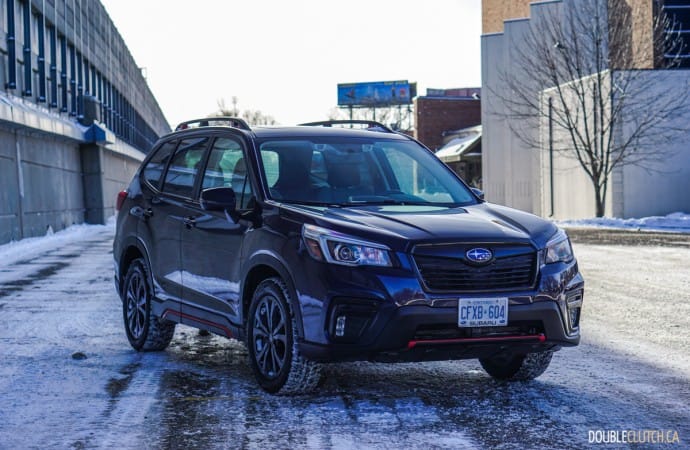 There is only one powertrain option for the Forester, but it’s a good one.

Winter is finally here, and with it comes awful traction, slow drives, poor visibility and days where you just wish you didn’t drive. That is, unless you’re behind the wheel of a 2019 Subaru Forester Sport. If that’s the case, then you’re just laughing at everyone stuck in the ditch as you coast on by. Riding on the new Subaru Global Platform, the 2019 Forester is stretched in almost every direction, with a new interior and exterior bringing a nice refresh to the nameplate. The “Sport” trim has unique styling with an orange colour theme, which works very well with the fantastic Dark Blue Pearl paint that is exclusive to this model as well. 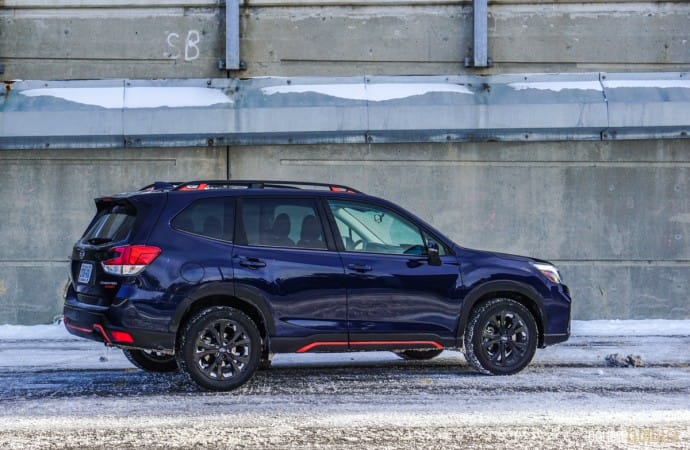 The interior styling is clean and functional, as expected in a Subaru, with a 6.5” in-cluster customizable driver information screen displaying significantly more information than previous generations. The center console takes a page out of the WRX’s book and has a high-mounted screen displaying vehicle information such as fuel range and economy, and below that an eight-inch infotainment screen that has Android Auto and Apple CarPlay capabilities with the STARLINK app. Built in GPS navigation is only available on the Premier (reviewed here) and Limited trims. Metallic trim and orange accents complete the look and add a sporty flair, momentarily letting you forget that you’ve outgrown the low-slung sport sedan stage of your life.

Base price for a 2019 2.5i Forester is $27,995, with the Sport trim listed at $34,995 and adding a lot of kit to the base model. It includes LED fog lights, a large sunroof, bigger brakes and 18” wheels, a powered tailgate, EyeSight, paddle shifters, X-Mode, and a sport tune for the SI-Drive Engine Management system. As with all Subaru vehicles, there are no option packages, but instead dealer installed accessories can be added on at any time, such as a Rockford Fosgate Premium Audio Upgrade (standard on higher trim levels) and a remote starter. 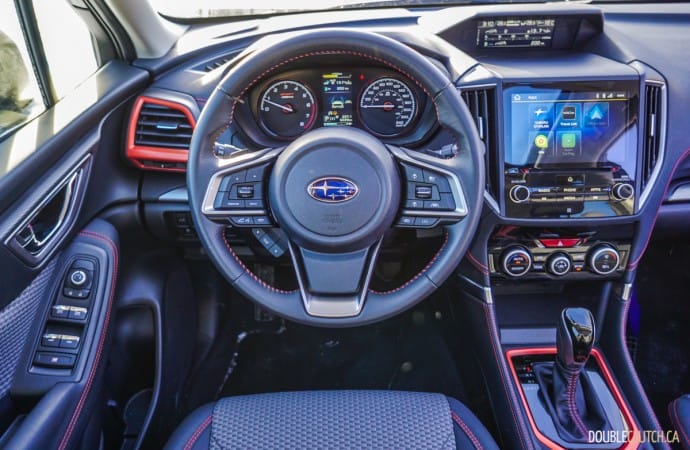 The Forester is quite roomy for its size class, with very comfortable rear seat room for at least two full-sized adults, and 908L of cargo room behind the rear seats. Cargo volume grows to a very healthy 2,008L with the second row lying flat. The sporty seats are held together with on-theme orange stitching, and the leather-sided cushions flank a cloth material with a pattern that looks great and is sure to hide most of the dirt that will come its way from living a Subaru active lifestyle.

A system deserving of a test all on its own is the Subaru EyeSight safety vision system. Deployed a bit differently in each vehicle (like flashing lights on the dash of the WRX), the setup in the Forester is a great system, with adjustable volume audio alerts letting you know that you’re about to leave a lane or warn you if the car in front suddenly slams on the brakes. The in-cluster diagrams show adaptive cruise and lane-keep information and even will provide a notification when the car ahead of you has started moving again, in case your eyes have gazed elsewhere. 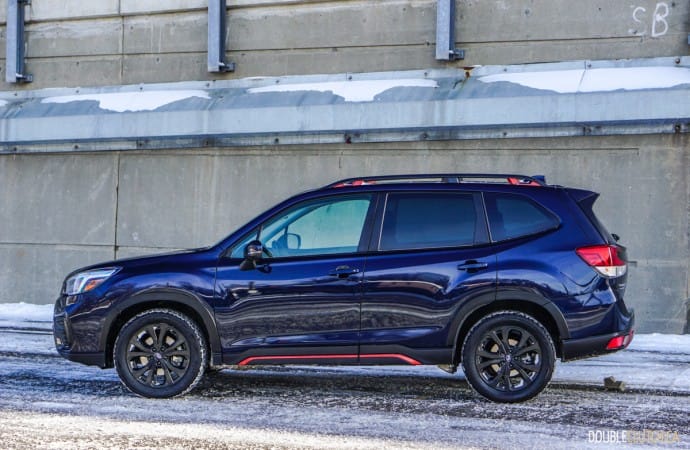 There is only one powertrain option for the Forester, but it’s a good one. All new for 2019, the 2.5L direct-injected Boxer engine under the hood is mated to one of the best CVTs in the business. The new engine puts out 182 horsepower at 5,800RPM, and 176 lb-ft. of torque at 4,400RPM. It also now has a start-stop system to conserve fuel at idle. The SI-Drive button on the steering wheel bumps up engine response, but we found the regular driving mode so good that the button was rarely used.

With the manual transmission soon to be all but extinct, Subaru has focused on their continuously variable transmission (CVT) to carry them in to the future, and for good reason. CVTs can adapt gearing ratios to driving, engine and throttle conditions to suit either acceleration or engine efficiency needs. Subaru’s team has done a fantastic job of tuning the CVT to squeeze the most performance out of the 2.5L engine, while programming in eight pre-set gearing ratios to make the car feel similar to a conventional torque converter automatic, and also make good use of the steering wheel mounted paddle shifters. 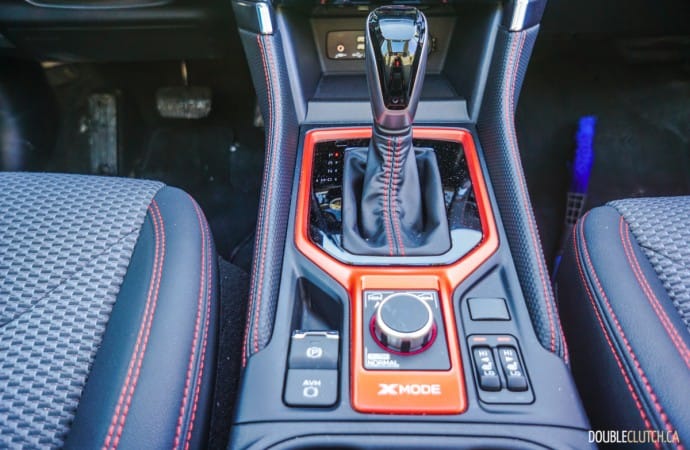 That CVT tune makes the Forester feel faster than other similarly powered crossovers. During the week we had the Forester one of its competitors, the Mazda CX-5 was also on test (reviewed here). Although similarly rated for engine output, the CX-5 simply couldn’t keep up with the Forester when merging onto the highway.  Fuel economy is also a plus on the Forester, with ratings of 9.0L/100km in the city, 7.2L/100km on the highway and a combined rating of 8.2L/100km, coming in a few ticks lower than that CX-5.

The CX-5 is not the only competition in one of the biggest segments in the industry. Fast and furious competition comes from all angles like the Honda CR-V (reviewed here), the all-new Toyota RAV4, Volkswagen Tiguan and domestic contenders such as the Chevrolet Equinox (reviewed here) and the Ford Escape. The Koreans also do battle with the Hyundai Tucson and Kia Sportage, both very worthy rivals in the space. 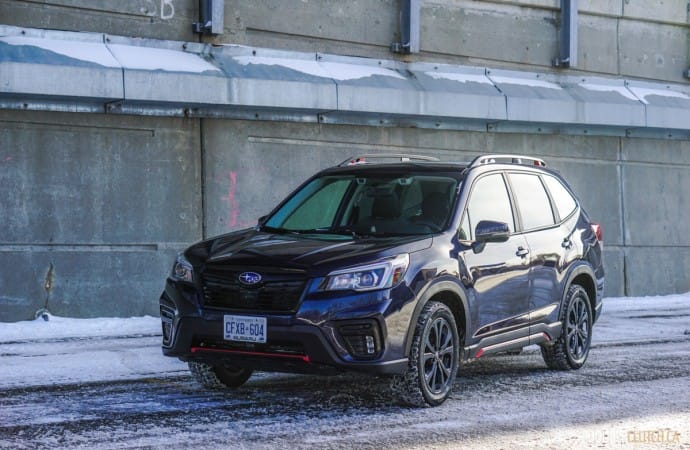 The 2019 Subaru Forester Sport is a joy to drive in the winter, especially when properly equipped with snow tires like the Bridgestone Blizzak DM-V2 that it was wearing. Personally I prefer driving my 2017 3.6R Outback because of the smoothness of the larger six-cylinder, but there’s no question at all that the 2.5L is absolutely suitable for the vast majority of buyers. The Forester also has better cargo capacity and a perfectly capable chassis ready for whatever you throw at it. 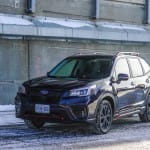 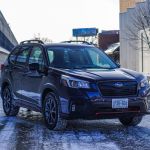 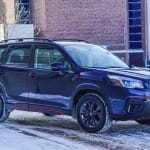 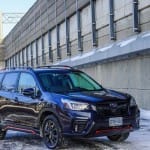 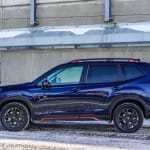 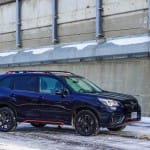 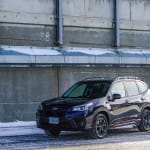 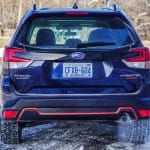 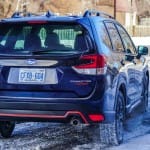 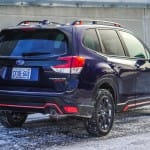 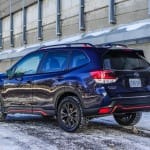 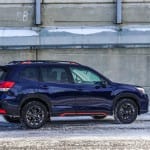 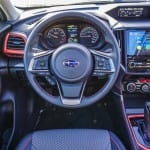 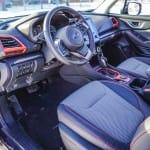 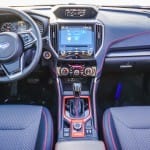 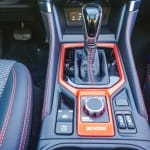 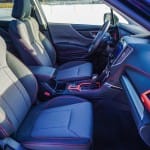 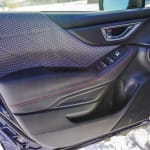 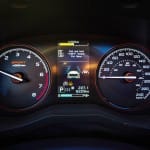 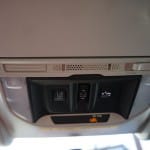 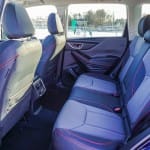 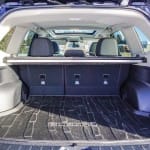