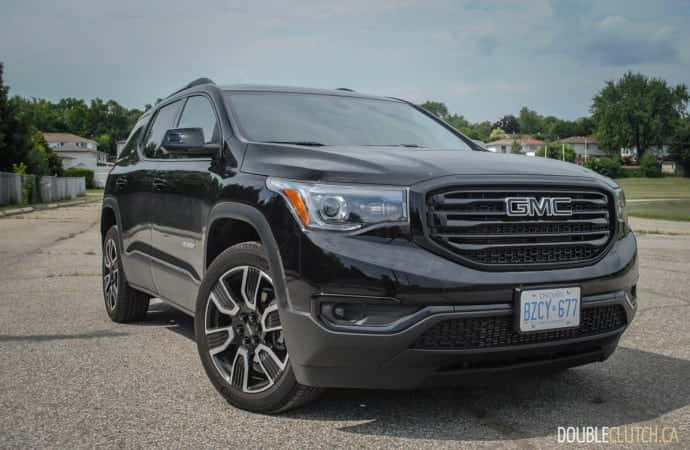 The ride quality in the Acadia is fantastic for the segment.

GM might have been one of the originators of the crossover concept, but they’ve certainly struggled to get the formula right over the last decade or so, which has resulted in a little nameplate roulette recently. GMC’s Terrain has been downsized from a midsize SUV into a compact, and the Yukon remains the only full-size offering. This means the Acadia, originally launched as a full-sized crossover for families who preferred car-like manners to the Yukon’s platform, has been moved down into the midsize slot. 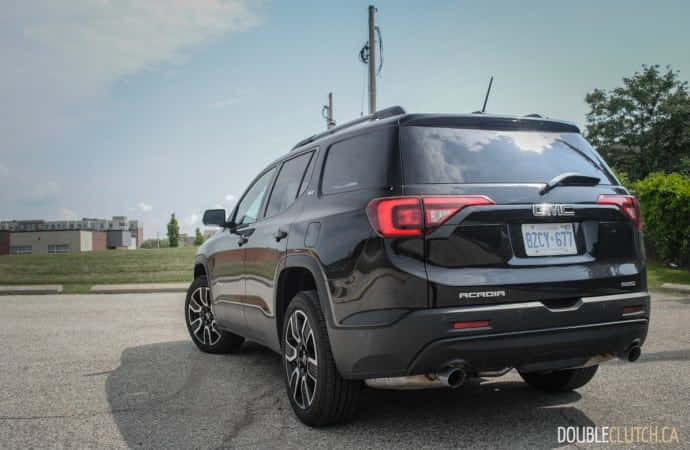 The current Acadia was launched as a 2017 model, but I had not yet had a chance to get any wheel time with it. In preparation for a road trip to the lovely rust-belt city of Toledo, Ohio, we arranged for a week with the 2019 GMC Acadia SLT AWD.

The Acadia is a fairly agreeable looking SUV in general, though with the weight loss program it’s been on it has lost the imposing stature that the previous model had. This Acadia blends in with rivals, and doesn’t do a whole lot to draw attention to itself. Our tester did come with the optional “Black Edition” trim package ($1,695) that blacks out all the exterior trim, including the GMC emblems, and adds a nice looking set of 20” wheels. This package is a fairly cost effective way to give the Acadia some attitude. 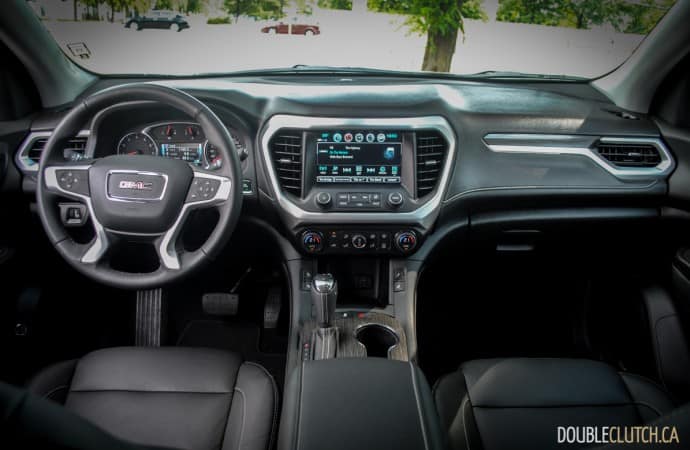 The layout in the cockpit has been dramatically improved over the years. Gone are confusing buttons, replaced with an eight-inch touchscreen running one of the most user friendly infotainment systems in the business and a set of very sleek and simple climate controls. The system includes Android Auto and Apple CarPlay, as well as GM’s 4G LTE hotspot, which really came in handy during our nine-hour round trip.

The heated black leather bucket seats up front also proved themselves to be extremely comfortable during the long journey, and the second row captain’s chairs appear to be just as accommodating. The second row chairs slide all the way forward with one pull on a handle to allow easy access to the third row bench. The third row is more than adequate for children, but on the tight side for adults. 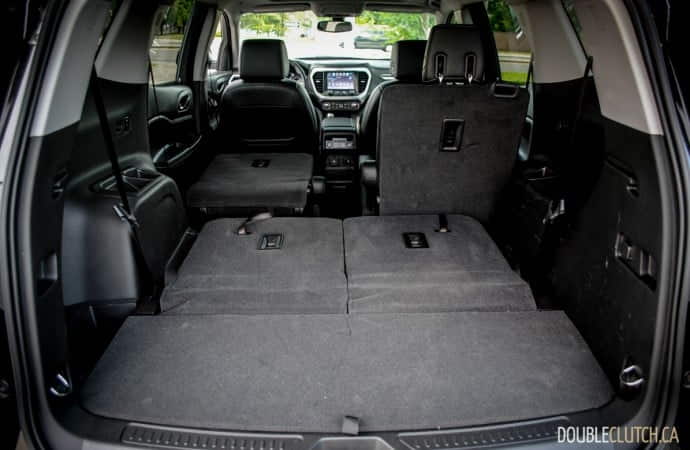 Cargo room is outstanding for the midsize segment, and both second and third row seats fold completely flat for extra bulky cargo. The Acadia also feels noticeably wider than others in the segment, resulting in a lot of room for passengers to spread out – another feature that was appreciated on our trip.

Storage space up front is adequate thanks to a large bin at the front of the center console, and a decently sized storage bin under the center armrest. The door pockets, however, are awkwardly shaped which limits their utility. In the second row, a deep drawer pulls out from the back of the console, which is a great spot for keeping snacks, electronics or whatever else the little ones in the back need to have handy without creating a bunch of clutter. 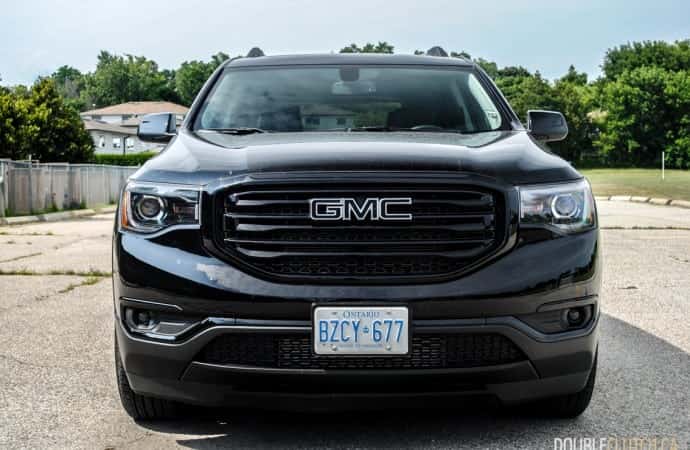 Practical the Acadia’s interior is, but beautiful it is not. While the Denali trim does boast a long list of upgrades, the interior in our more mainstream SLT-1 tester is pretty bland with lots of matte finish, but cheap feeling plastics, some brushed aluminum trim, and some obviously-faux woodgrain on the console and dash.

The steering wheel is the exception to this. It’s thick, wrapped in soft leather, and has soft rubberized buttons for all controls. Our tester did get a rather pricey ($3,230) Pro-Grade package which adds a dual panel sunroof, navigation and tow package. With the windows down enjoying the summer heat, the space feels less bland, but there are definitely more luxurious interiors available in the segment for similar money. 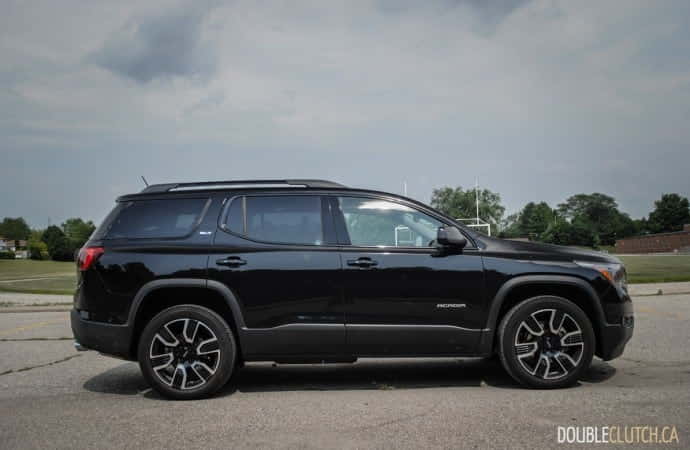 The Acadia is available in both FWD or AWD guise and with a 2.5L four-cylinder or the larger and more powerful 3.6L V6. The four cylinder is only available in base SLE-1 trim, but does give the Acadia a low cost of entry at $34,300 if you’re willing to live with FWD. The V6 is much better suited to a vehicle like this, at 310 horsepower and 271 lb-ft. of torque at 5,000RPM.

Power flows to all four wheels through a six-speed automatic and while not sporty by any means, the Acadia has a nice, solid and traditional SUV feel about the way it drives. The V6 is responsive and offers plenty of passing power yet remains quiet and refined. The six-speed is a great match as it’s exceptionally smooth but not necessarily performance oriented. 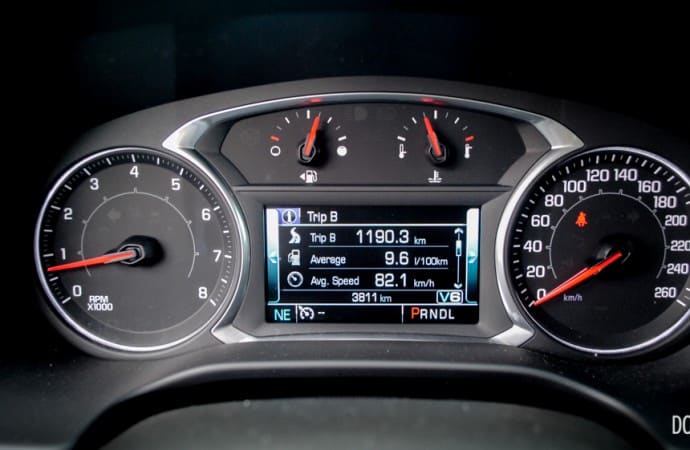 The ride quality in the Acadia is fantastic for the segment. It’s buttery smooth both on the highway and in the city. Handling is predictable, and the steering is well weighted with a decent amount of feel for what it is. It swallowed the 900 kilometer round trip effortlessly and I stepped out feeling fresh, not fatigued. My only complaint during the trip was that there is a fair bit of tire noise that makes its way into the cabin, especially on rougher surfaces.

Since it was a travelling week I didn’t get the chance to put the Acadia through the rigor of my daily commute, but it did return an impressive 9.4L/100km average fuel economy on the almost entirely highway trip. That’s slightly better than the rated 9.5L/100km rated highway consumption, and of course, the good old naturally aspirated V6 is happy on regular fuel. 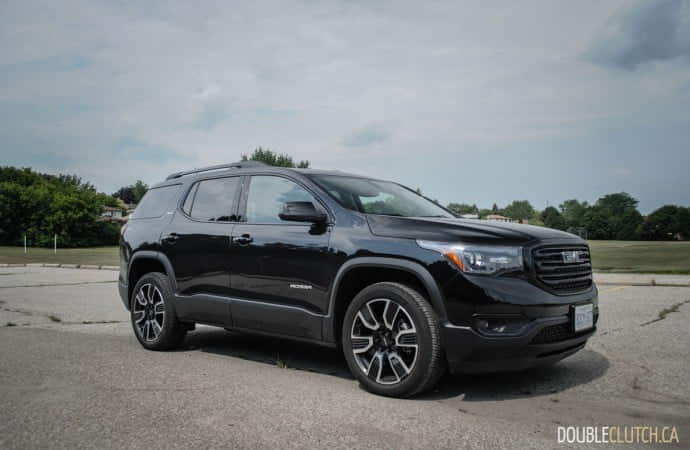 The base price of our mid-trim level Acadia SLT-1 is $45,800, putting it right in line with competitors like the Honda Pilot and Toyota Highlander comparably equipped. With the aforementioned Pro-Grade and Black Edition packages added, it comes to $51,335. It’s a bit tough to swallow the idea that this Acadia SLT tops the $50,000 mark, but with the current incentives GM is offering, transaction prices are likely to be thousands less. This very practical and comfortable family cruiser, with a time-tested and smooth powertrain, a complete suite of electronic driver safety aids.

If you’re in the market for a traditional feeling, no non-sense family hauler with the space and features to keep everyone in the family happy then the 2019 GMC Acadia SLT AWD is definitely worth considering. While I do find GM’s moving of nameplates from one segment to another a bit annoying, the lineup now makes a lot more sense. 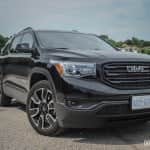 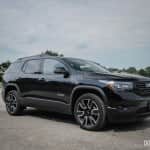 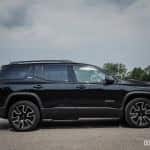 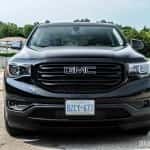 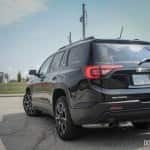 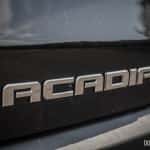 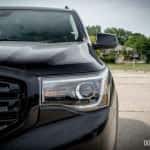 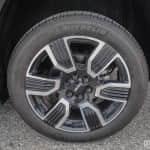 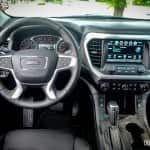 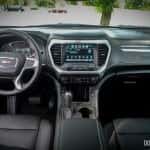 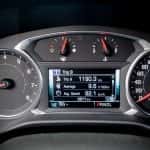 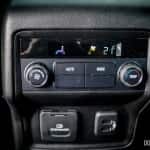 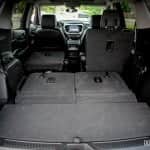 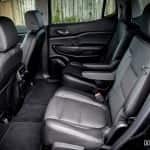