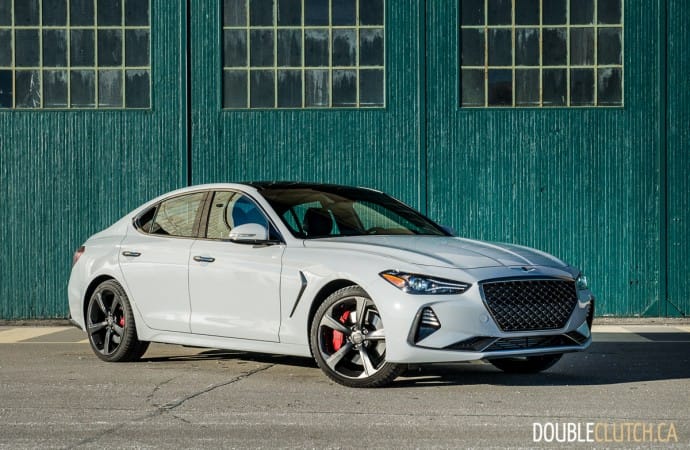 In any absolute terms, this is a car that can do battle with and come out ahead against any of its competition.

Fresh off what was practically a clean sweep of car awards season – the DoubleClutch.ca Magazine’s Car of the Year being among the honours – the 2019 Genesis G70 2.0T Sport is hopefully finally making inroads with the automotive buying public. Our editorial team keeps stressing that the entry level premium G70, in all of its forms, is a good car period, and isn’t just a good car “for a Hyundai”, in reference to their parent company. Any review on this site will say that the G70 is a great driving car that is built as well as any premium car out there. It was hard to turn down another opportunity to test one in Sport trim with rear-wheel drive and a manual transmission, and so a Siberian Ice sedan found its way into the garage for another week of testing. 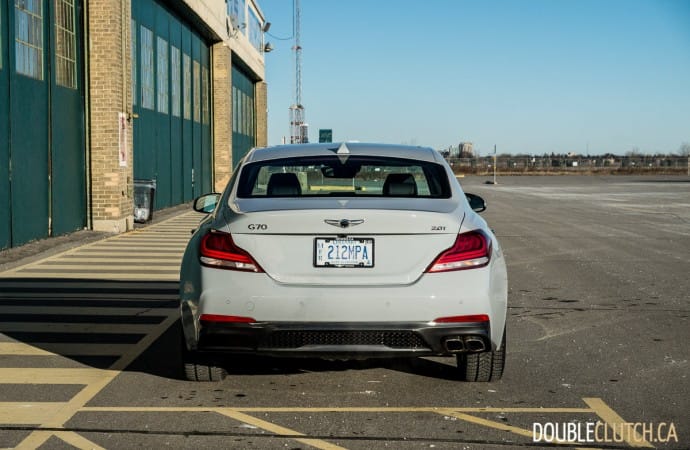 The G70 2.0T Sport in rear-drive and manual configuration comes in one price only: $45,500 including freight charges. For both sales and service, the customer experience is being offered through the Genesis At Home concierge program, which brings everything to the driver’s home or place of work, whether it’s for a test drive or service (loaners are provided for all maintenance or warranty work). Complimentary scheduled maintenance is included for 5 years or 100,000KM, whichever comes first, and the bumper-to-bumper warranty also spans the entire 5/100 duration, which beats out most of the industry’s 3 years or 60,000KM.

For your forty-five large, there are no options within a trim level, and everything available comes as standard equipment. There are huge fixed-caliper Brembo brakes at all four corners, a rear limited slip differential (LSD), LED headlights with darkened chrome accents, head-up display, power-folding mirrors, rain sensing wipers, 15-speaker Lexicon premium audio, and a sport exhaust. It would take an extra five figures to equip a BMW 3-series (reviewed here) similarly, and even then, no manual transmission is available. For the Genesis, there is no option to pair all-wheel drive with a manual transmission. 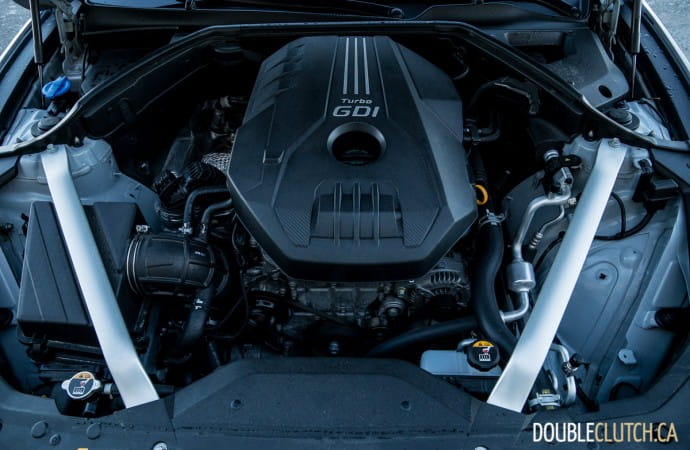 Under the hood of all 2.0T variants of G70 is, as the name implies, a turbocharged 2.0-litre inline four cylinder engine. Peak output is 255 horsepower at 6,200RPM and 260 lb-ft of torque between 1,400 and 4,000RPM, and these numbers are more than enough to be able to rocket the G70 around with authority. The sport exhaust gives a little more bark to the four banger’s bite, and the Genesis pushes through the rev range with a relatively satisfying snarl. This snarl comes without excessive vibration or harshness thankfully, but turbo lag is a bit noticeable with the manual transmission in particular, with a slight delay in throttle response between each upshift as the turbo comes back to life.

Fuel economy ratings for the 2.0T come in at 12.8L/100KM in the city, and 8.5L/100KM on the highway. Observed consumption was pegged at 10.8L/100KM in mixed driving in wintery weather. Tank capacity is 60 litres, and premium fuel is recommended (all nominal power and economy ratings are given using premium fuel). At 1,673 kilograms (3,688 pounds) curb weight, the G70 is rather portly for its size, and its middle of the road fuel economy could be improved a bit if it went on a small diet. 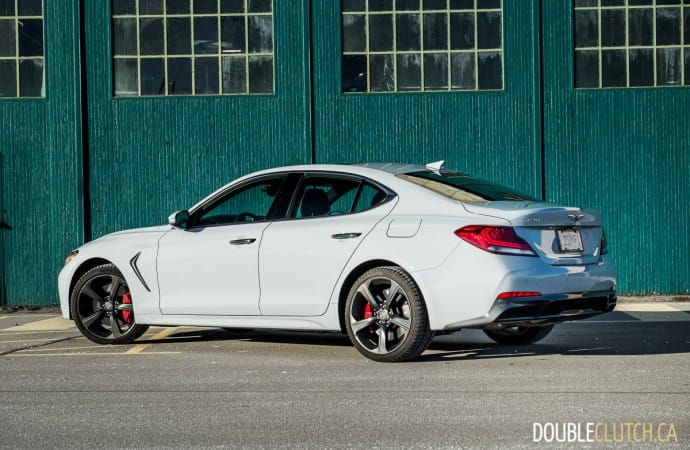 With many automakers following the herd and ditching the manual transmission, Genesis is swimming against the current by providing a slick six-speed row-your-own. Even if demand isn’t as high for this configuration, it’s an important halo item for a nameplate when it comes to respecting automotive enthusiasts and purists. No, these people aren’t necessarily the ones buying the cars, but their emotional response helps to position the product within the market.

Fortunately, Genesis has also made this manual a good one to use, with a solid feeling shifter that emulates the Germans in many regards. Some may find it to be excessively rubbery feeling – like a BMW 3 Series – but this certainly beats out excessive play and low quality undertones any day. This was a particularly big challenge for the old Hyundai Genesis Coupe, which had shifter bushings that felt like cardboard between the gates, and is often the patron saint of the “worst shifter ever” conversation. This is not even close to being the case with the G70 thankfully. In addition to the shifter, the clutch is easy to modulate and weighted well for any kind of driving. Heel-toe blipped downshifts are also easy as pie. 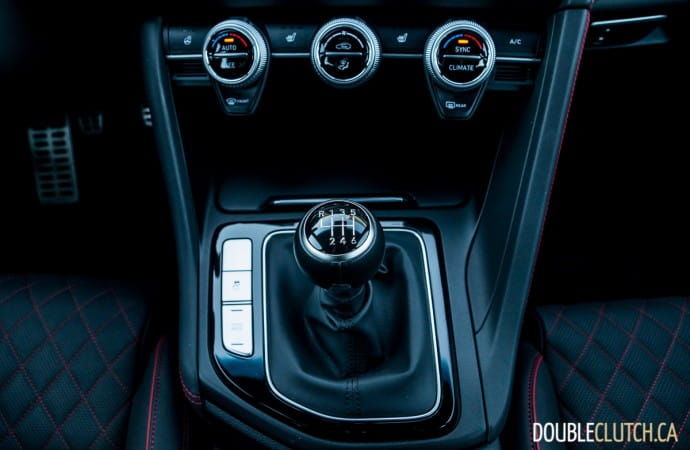 Even though it’s a relatively heavy car, the G70 Sport 2.0T certainly doesn’t show it dynamically. Steering weight is adjustable and is perfect in the heavier setting, and it feels plenty agile at any speed. Turn-in response is instant and grip levels are very impressive, especially considering that the test car was wearing winter rubber on its 19-inch black alloy wheels. The Genesis is every bit as good as its European rivals in this regard, if not better.

The combination of perfectly balanced rear-wheel drive and a manual transmission is rare these days, and it’s important to recognize these wins when they happen. In a Toronto snowstorm over the Christmas season, the rear-drive was not a concern in terms of getting stuck, and a good set of winter tires got the job done with only a bit of wheelspin. It’s the small price to pay in order to avoid upsetting handling balance and polluting the front wheels with anything other than steering and braking. 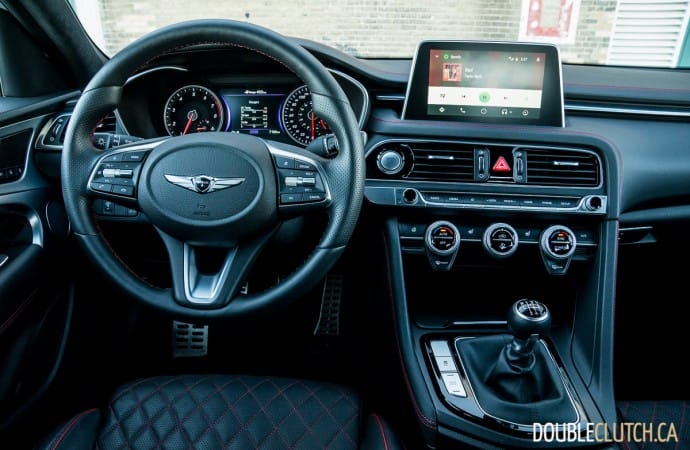 Ride quality, despite being the Sport trim, is soft enough for every day motoring without any objection from most drivers or passengers. The G70 strikes a good balance here, although the shock absorbers could use a little more damping for better body control over bigger bumps. As a cruiser, front seat occupants will find themselves very comfortable, with the quilted leather and 16-way power driver’s seat (including thigh extension) leading the way. Rear seat passengers will be a bit more cramped however, but this is fairly par for the course in this segment when comparing against the likes of the Jaguar XE or BMW 3 Series. The good news is, however, that cargo space in the trunk has not been compromised, and the rear seats are 60/40 foldable.

With and 8-inch touch screen handling the main infotainment interface, the G70 optimizes ergonomics well by coupling the screen with just the right amount of buttons and knobs. The configuration menus themselves are easy to operate, and changing settings doesn’t require a PhD in astrophysics. The Sport’s red stitching throughout the interior shows off good attention to detail, and the fit and finish is equally impressive. The 15-speaker Lexicon audio packs a strong punch, with excellent clarity to go with clean bass. For smartphone pairing, both Android Auto and Apple CarPlay are standard issue, negating the fact that there is no built-in navigation unless a higher trim level is selected. 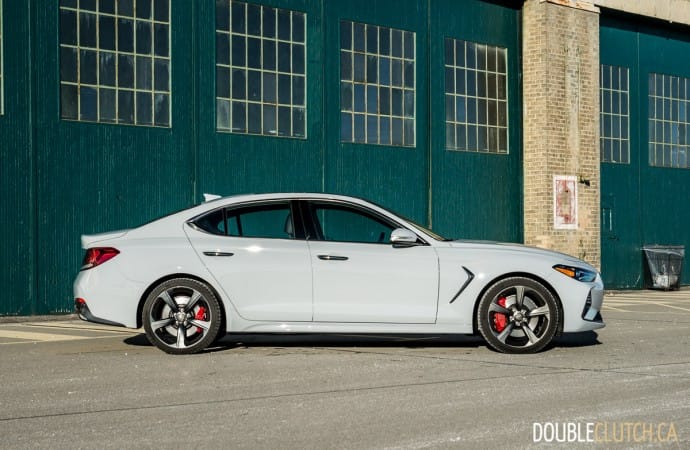 Whether it’s in manual, rear-wheel drive form, or with an automatic and a 365-horsepower turbocharged V6, the 2019 Genesis G70 has quickly become one of the greater revelations in its segment. In any absolute terms, this is a car that can do battle with and come out ahead against any of its competition, and the automotive journalism industry as a whole seems to agree. The skeptics should try to get behind the wheel of one as a test, and more than likely, they’ll come away as being pleasantly surprised, if not blown away. Just when we all thought that the sporty premium sedan was going away in favour of a softer, more volume selling offering for the lowest common denominator, Genesis reminds us that it doesn’t need to be that way. 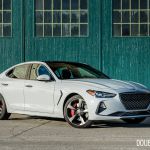 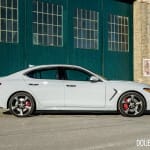 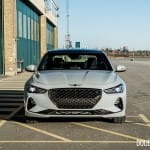 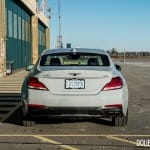 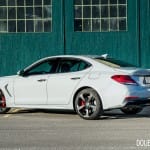 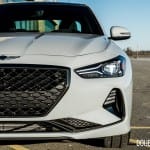 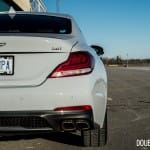 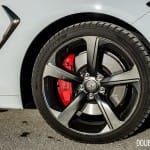 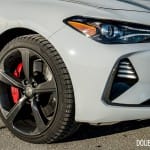 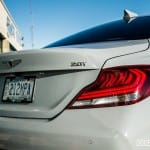 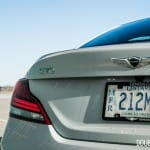 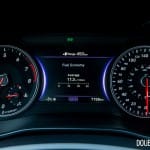 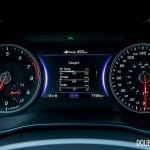 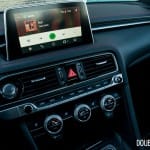 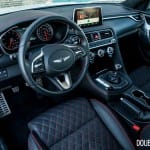 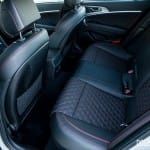 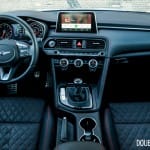 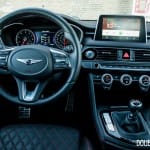 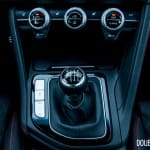 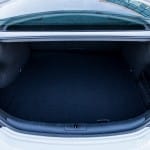 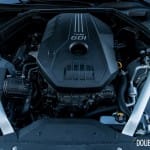