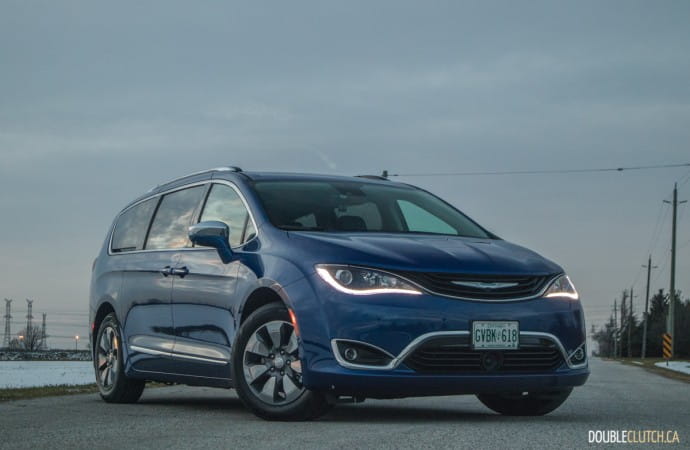 Societal stigmas have led us to believe that minivans are uncool.

As such, the car-buying public in North America has naturally gravitated to sport-utility-vehicles and crossovers, which are quickly taking over the market. The crossover is the new minivan, and they are by no means “cool”, as popular as they may be. A few minivans remain on the market, and they sell extremely well, including the aged Dodge Grand Caravan, a strict value proposition. We set out to prove society wrong and establish that the minivan is in fact, cool, with an extensive road test of the 2019 Chrysler Pacifica Hybrid. 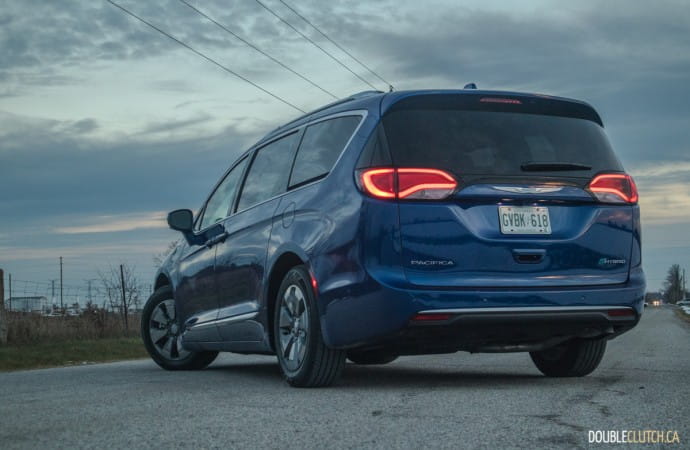 Let’s get one thing out of the way – the Pacifica Hybrid’s biggest limitation is its price point. It starts at $51,745 and our fully loaded Limited trim test van surpassed the $60,000 mark. This puts it well over the $52,000 Honda Odyssey Touring (reviewed here) and the Toyota Sienna Limited. If you take the Hybrid’s fancy powertrain out of the mix, a loaded Pacifica Limited can be configured to a similar number. Sticking with the environmentally friendly model; it’s expensive, especially considering the elimination of green vehicle incentives in Ontario in 2018.

Price aside, the Pacifica Hybrid is able to do things no other family hauler of its size and versatility can. Topping up the battery as much as we could, we were able to squeeze over 50km of strictly electric driving out of the green minivan. Those whose weekly commutes include shuffling back and forth from hockey practice, piano lessons, and little league baseball will be able to benefit from this setup, especially if you’re able to charge at home. The 16-kWh battery pack can hold just enough juice to get most Canadians around without ever having to dip into the gasoline engine. 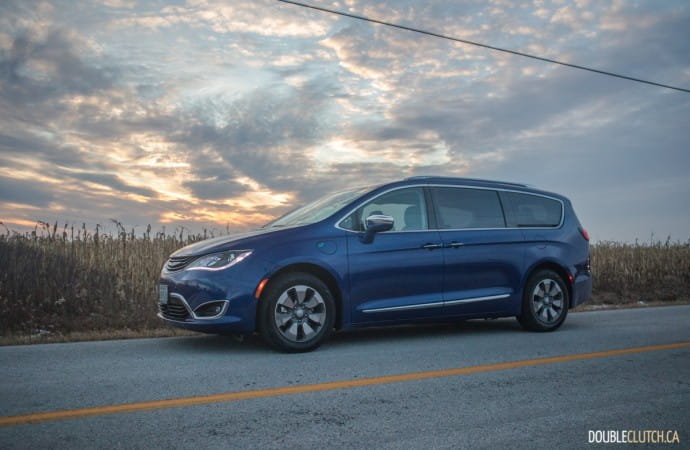 Those who have access to 240-volt power at home or work will be able to juice up the Pacifica in just under two hours. Some may even have time to get home from work, plug the car in, and be recharged by the time dinner is over. It’s a clever system, though it’s worth noting that if 120V is all you have, charge time can be up to 14 hours. The charge port is conveniently located directly ahead of the driver’s door, and a cable is included with the van. From our experience, public charging infrastructure in the Greater Toronto Area has improved vastly over the past year, and is getting better by the day.

Even after the Pacifica’s battery has been depleted, it can still function as a traditional hybrid. Chrysler is specifically telling consumers that if they don’t have the means to plug this thing in, they don’t need to, and it will still be significantly more efficient than its gasoline counterpart if used as a regular hybrid. This is thanks to use of the 3.6L Pentastar V6 in the regular Pacifica (reviewed here), but a slightly modified version. It pairs up to two electric motors and the 16-kWh battery to produce a combined 260 horsepower, sent to the wheels via a continuously variable transmission. 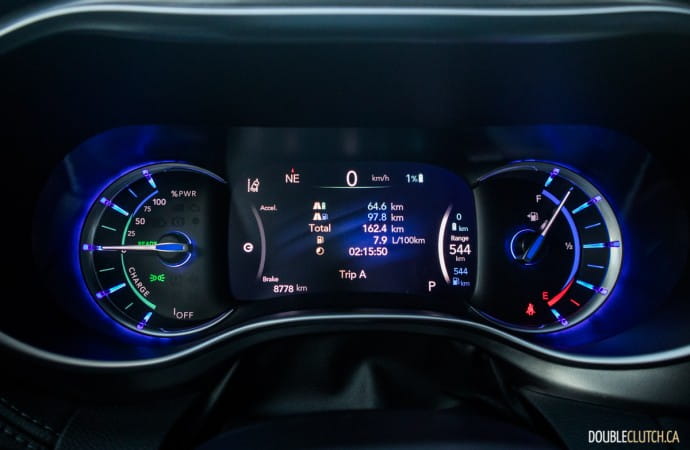 Power delivery and overall driving behaviour is typical for both a hybrid and a minivan. The Pacifica Hybrid is very relaxed in operation, and has decently sharp reflexes. Where it really comes into its own element is out on the highway, where the smooth ride quality and minimal amount of road noise comes together for an excellent family cruiser. We have spent considerable time in the Town & Country (reviewed here), the Pacifica’s predecessor, and the ground-up revamp has worked wonders. Where the Town & Country still displayed the same unrefined and dated underpinnings of the Grand Caravan, the Pacifica feels like a traditional station wagon, with the reflexes (and fuel mileage) of a much smaller vehicle.

The styling isn’t bad, either – when comparing the big Chrysler to the family rigs from Asia, it becomes evident quite fast that this is the looker of the bunch. The Sienna, Odyssey, and Kia Sedona are the only vans left, and their respective focuses are evident. The Odyssey has the sharpest dynamics, the Sienna is typical Toyota (comfortable yet bland), and the Sedona aims to be the value pick. The Pacifica makes no compromises in any of these departments, and comes through with the best interior and nicest finish. 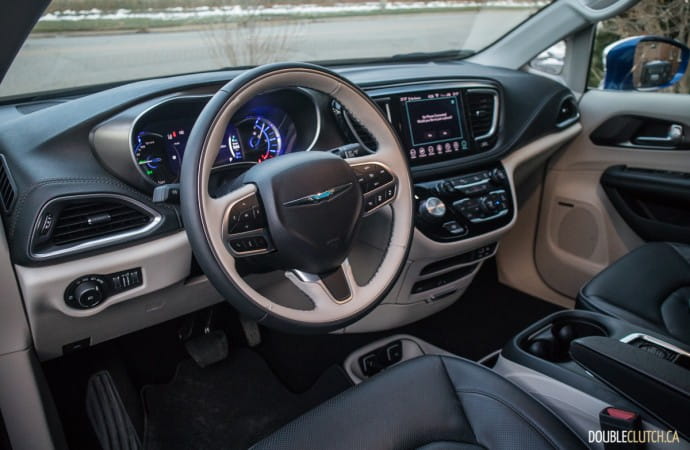 Our test vehicle was equipped with a two-tone interior colour scheme that looks great from any angle. Materials used are high quality and don’t feel nearly as plastic-laden as the setup in the Mopar vans of the past. An 8.4” touchscreen houses the Uconnect infotainment system, which is still a favourite around our office, and it’s now able to support Apple CarPlay and Android Auto. A gripe I continue to have with this system is that the heated seat/steering wheel controls are hidden in the touchscreen. A hard button would be beneficial on cold mornings when the Uconnect system is taking an extra minute to boot up.

Utility within the Pacifica’s interior is also quite good, with the only real compromise being the loss of Chrysler’s corporate Stow’n’Go seat folding technology in the second row. The third row still folds flat quickly and easily, but the Hybrid model’s second row captain’s chairs doesn’t fold completely flat due to the battery packs living directly below. 32.3 cubic feet of cargo space is usable behind the third row, and with it folded in, this expands to 98.5 behind the second row. 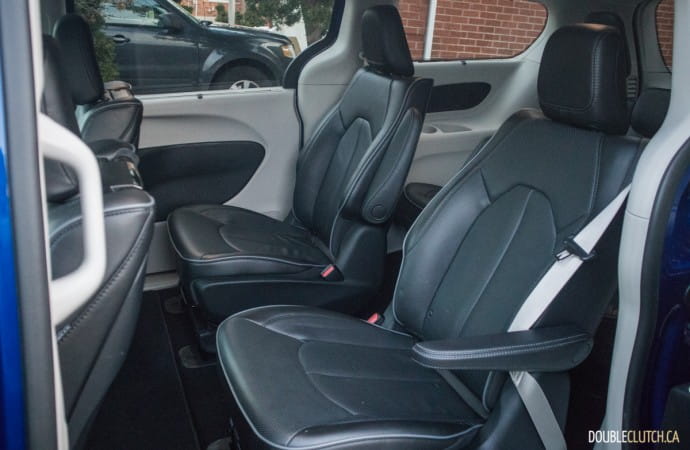 Perhaps the biggest downfall with the Pacifica Hybrid is the complete lack of brake feel thanks to the regenerative brakes. There is no auto regeneration or one-pedal driving as with other, more focused electric vehicles, but this isn’t the issue. The non-linear brake feel is thanks to an odd combination between friction and regenerative braking, which isn’t consistent. After a few days behind the wheel we became used to it, but it’s best to plan ahead for the first few stops.

Pricing for the Pacifica Hybrid starts at $51,745 for the Touring Plus model, and $57,245 for the Limited tested here. The Limited adds premium Nappa leather, power sliding doors and liftgate, Uconnect with navigation, and a 13-speaker Alpine stereo. The Ocean Blue paint is an extra $245, and a 20-speaker Harman/Kardon stereo is $995. $1,695 will buy you the Tri-Pane panoramic sunroof, and the total comes to $60,975 before fees or taxes. 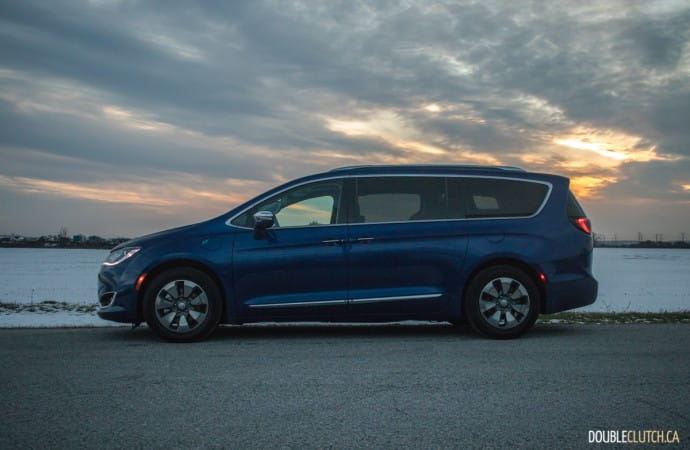 The 2019 Chrysler Pacifica Hybrid really is a great van, and the reality is that no crossover can come close to the versatility or usability of a traditional minivan. If car-like driving dynamics are what you’re looking for, then you’re likely in the wrong segment with a crossover. Make no mistake – this Pacifica doesn’t drive like a Honda Civic Type R. It makes its weight known, but that’s not the point. This is a premium cruiser that will have no issues gobbling up the entire family, all of the luggage, and the Labrador retriever for that holiday road trip – all while getting 7.6L/100km on regular fuel. Find me a crossover that can pull that off. 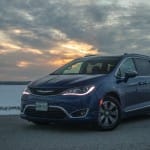 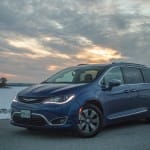 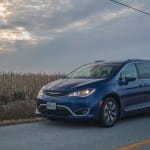 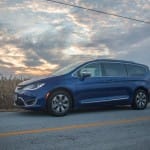 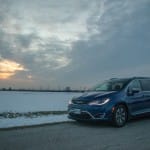 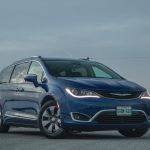 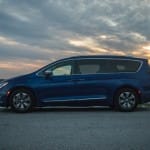 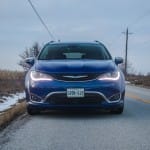 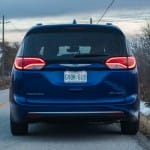 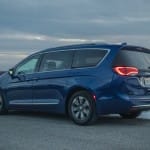 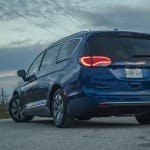 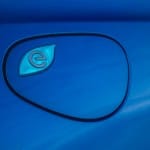 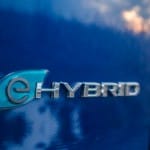 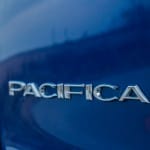 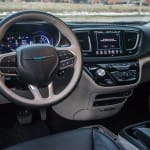 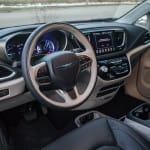 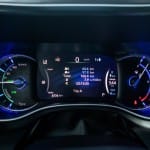 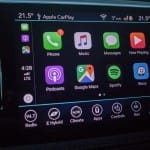 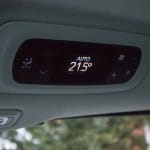 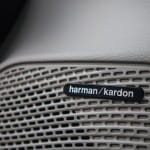 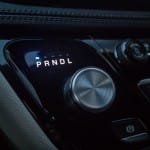 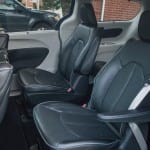