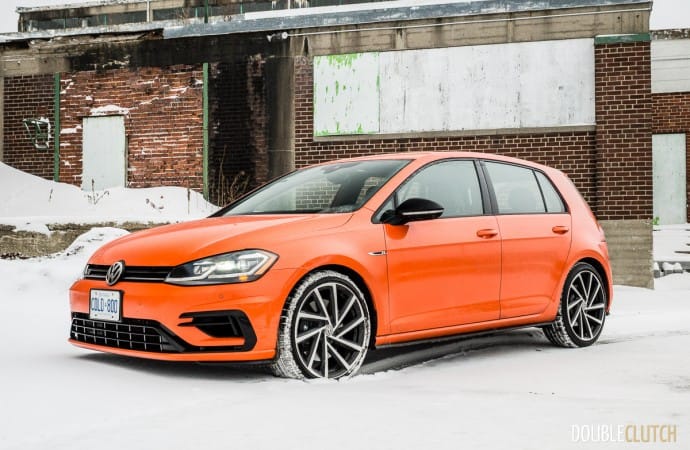 In a vacuum, a fantastic hot hatch that does very well in the smiles per gallon department.

With a design refresh for this year, the 2018 Volkswagen Golf R receives a new fascia up front, and LED taillights in the rear to match what Europe’s been getting for the last few years. In addition, on top of five ordinary colours that we’ve been accustomed to on the all-wheel drive Golf R, for an extra $2,995, buyers have the choice of an extra thirty shades of awesome. There are ten blues, five greens, four reds, three each of browns, oranges, and purples, and two yellows. Volkswagen Canada served up a TNT Orange test car for the DoubleClutch.ca Magazine editorial team to take out for a spin, despite its conspicuous pumpkin-like appearance, it looked pretty damn cool. 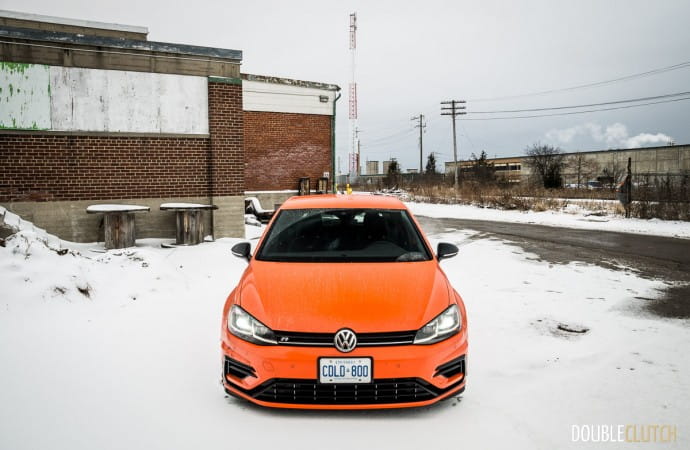 The changes are a bit more than just skin deep however, as there’s a new seven-speed direct-shift gearbox (DSG), which has one extra gear compared to last year’s dual-clutch unit. For the auto enthusiasts who insist on shifting for themselves, a six-speed manual is available, which is how the test vehicle came equipped. Base price without the $2,995 premium colour is $42,065; the DSG adds $1,400. The pumpkin test car had a fancier 19-inch “Spielberg” alloy wheel for $250, and the Driver Assistance Package (adaptive cruise, blind spot detection, rear traffic alert, forward collision warning/autonomous braking, automatic high beams, and park distance control) for $1,550. All told, the as-tested price rolled up to $46,860.

For your money, you get full Android Auto and Apple CarPlay integration through a mildly-updated eight-inch touch screen interface, eight-speaker Fender audio, keyless access with pushbutton start, leather seats, adaptive LED headlights, rain sensing wipers, and navigation. Brand new for 2018 is the Volkswagen Digital Cockpit instrument cluster, which replaces the traditional gauge cluster with a large central screen that’s very configurable. Different information readouts and also navigation information can be placed on this screen, and while it does provide information however the driver wants it, the layout does prove to be a bit busy at times. Small details like a digital speedometer get drowned out in all the noise, and end up being ignored altogether. 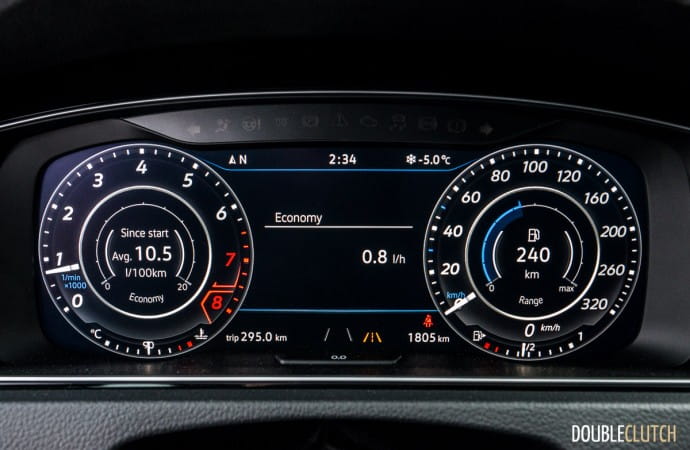 Unchanged for the Golf R’s mid-cycle refresh is VW’s EA888 2.0-litre turbocharged four cylinder engine. Making 292 horsepower at 5,400RPM and 280 lb-ft of torque between 1,800 and 5,500RPM, an abundance of torque is available just off idle, with a sweet midrange as the tachometer heads up to its 6,500RPM redline. Turbo lag is more noticeable between shifts with the six-speed manual transmission, since the DSG shifts quickly enough to keep things on full boil.

That’s not to say that rowing your own gears is any less fun however, with good, if not slightly rubbery feel from the shifter. Clutch takeup is easy to modulate, and daily driving will be nice and comfortable. During performance driving, however, drivers may notice fairly aggressive clutch damping that delays engagement when rapidly releasing the pedal. While this momentarily impedes forward progress, it is likely in place to prevent drivetrain shock (and eventual catastrophic failure) to the transmission and all-wheel drive system. 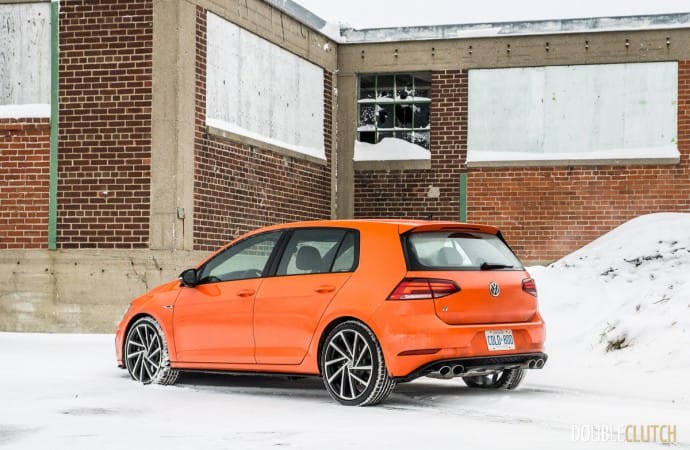 Fuel economy for the VW Golf R with the six-speed manual transmission is rated at 11.1L/100KM in the city, and 8.1L/100km on the highway. Seven-speed DSG cars are rated for 10.6 and 8.0, respectively. Observed fuel economy after a couple weeks of testing returned about 10.0L/100KM in mixed driving in blustery winter weather. Fuel capacity is 55 litres, and premium is required. One caveat – plain old 91 octane (on North America’s anti-knock index or “AKI” scale, and not Europe’s Research Octane Number, or “RON”) won’t do – Volkswagen requires 92 or better.

As a driver’s car, the Golf R makes the most of its 292 horsepower and Haldex type all-wheel drive. Torque split is determined by an electro-hydraulically controlled clutch, and in normal operating conditions, almost all power goes to the front wheels. With a bunch of computer wizardry pulling in information such as steering angle, wheel speed, and vehicle yaw, power gets sent to the rear in almost real-time. Driving the R in snowy conditions, launching into four-wheel drifts with throttle application was easy as pie, and felt seamless. 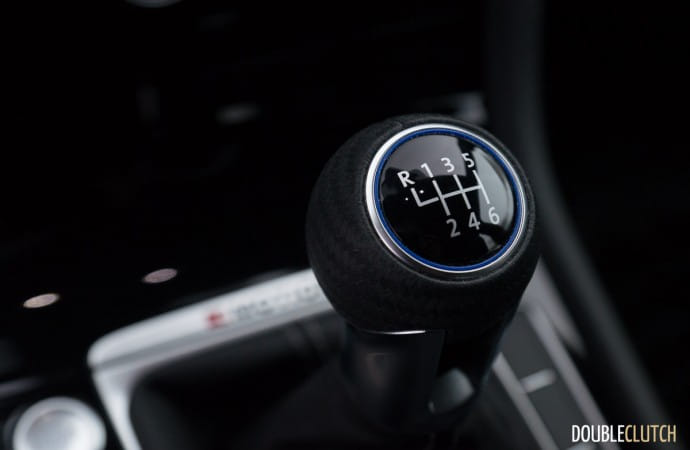 When the roads are dry, however, the Golf R still handles and feels like a sportier version of the GTI. Under both turn-in and corner exit, it still behaves like a traditional front-wheel drive car, even though power split and brake-based torque vectoring send power between all four wheels. Come in too hot, and understeer is still the R’s MO – a little lift-off oversteer is required in order to get a lot of rotation.

Compared to the competition – namely the Subaru WRX STI (reviewed here), Honda Civic Type R, and Ford Focus RS – the VW does fall a bit short when it comes to handling and putting its power down. Where it makes up for that, however, is with daily streetability. In particular, the Ford is almost inhospitable in terms of ride, and the Subaru follows not too far behind. The VW rides fairly similarly in stiffness to the Honda, which is a very happy medium for urban drivers who find themselves hitting potholes and bad roads on the regular. It’s comfortable for both front and rear seating positions, and the hatchback configuration lends itself well to carrying cargo. 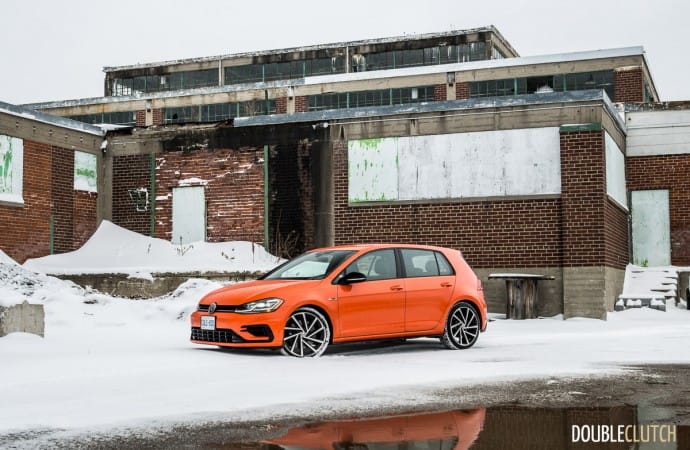 As you sweep through the gears in normal driving, the “Soundaktor” pumps artificial engine noise into the cabin. This sound could be described as snarly, if not a bit annoying. Thankfully, it’s configurable in the driving mode selection menu, and in the more finely-tunable “Individual” setting, the engine sounds can be kept to a minimum. At this setting, thankfully, road or wind noise never become a problem, since the Golf and its MQB chassis are built as tight as a bank vault. Damping firmness, steering firmness, and even the aggressiveness of the adaptive headlights can be tuned. During testing, softer dampers, minimum engine noise, and stiffer steering seemed to offer the best of all worlds.

In a vacuum, the 2018 Volkswagen Golf R, in conjunction with its incremental but important updates, is a fantastic hot hatch that does very well in the smiles per gallon department. Relative to the competition, however – and even the lower-priced, front-drive GTI (reviewed here) – the R isn’t about to handily shatter any performance records or win any track battles. Instead, it’s the best daily driver and road car that offers most of the performance and none of the boy-racer looks of its Honda, Ford, and Subaru peers. It’s a more mature product that guarantees to satiate die-hard Volkswagen enthusiasts. Realistically, if spending my own money, I would put the Golf R very close to the top of my list. 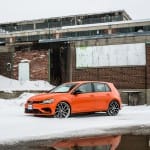 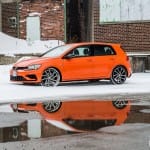 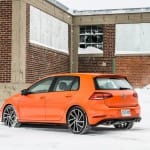 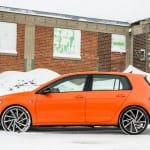 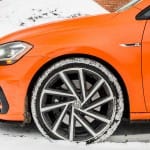 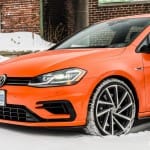 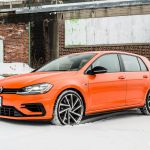 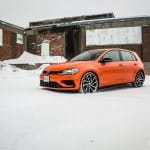 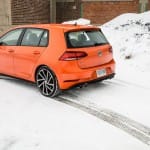 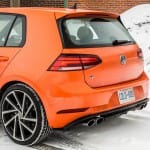 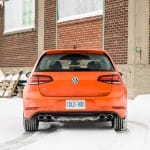 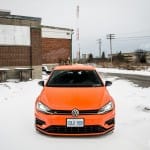 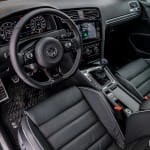 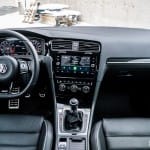 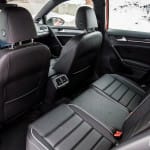 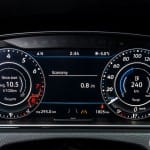 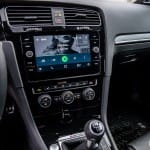 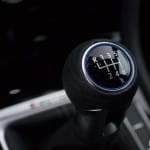