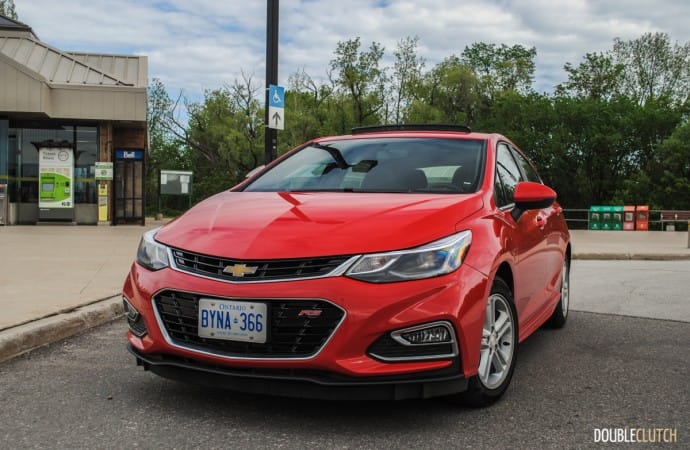 The Cruze Hatch’s driving dynamics hit on a few important high points in its segment.

Hot little hatchbacks have experienced a bit of a resurgence in recent years thanks in part to some really phenomenal cars hitting the market. For buyers who appreciate the utility of a hatch but don’t need the extra size and cost of a crossover, these peppy, fun and efficient cars fit the bill perfectly. It seems both Honda and GM were on the same page here as both have recently got back into the hatchback game. The Civic Hatchback (reviewed here) is back, and definitely has the potential to cash in on some 1990’s nostalgia with anyone who remembers just how popular and well loved the Civic Hatch of that era was. 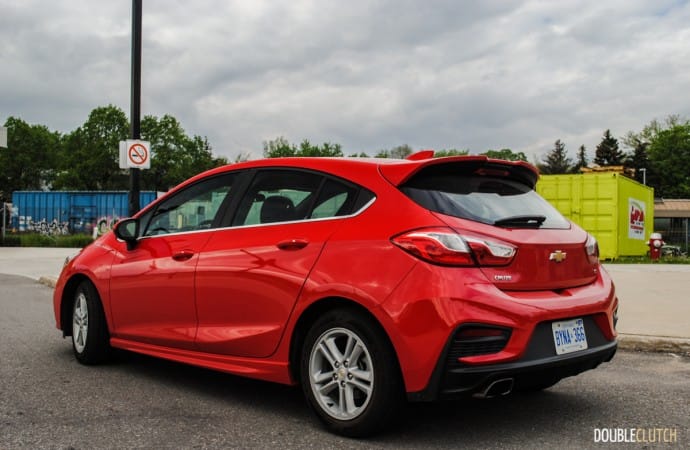 The new kid in town though is this 2017 Chevrolet Cruze Hatchback LT. Brand new from the ground up, Chevy has built themselves a hatchback version of the popular Cruze (reviewed here) and is set to take on the intensifying competition. The Cruze Hatchback is a handsome looking car with a decidedly more mature and fluid look, not unlike the Mazda3 Sport (reviewed here), which contrasts the Civic’s more radical and somewhat awkward styling. The Cruze makes good use of the latest Chevrolet corporate fascia and a flowing and curvy body line dominates the profile of the car.

The lines on the Cruze Hatchback appear deliberate and well thought out, unlike its sedan sibling which doesn’t look nearly as graceful. Chevrolet offers a nice palate of color choices on the Cruze as well, including some great deep reds and blues. The test car came in “Red Hot”, which is a fairly standard bright red, which when coupled with the standard 16” and narrow tires found on the base LT trim, gave the car a bit of an economy look. 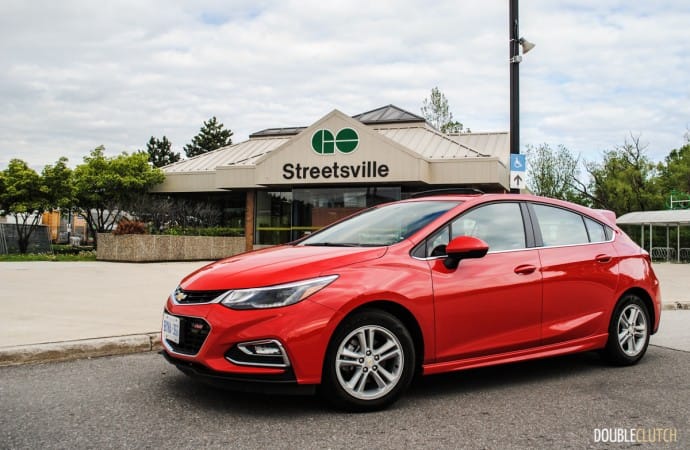 While still a basic LT, our test vehicle came equipped with the RS Appearance Package, which for $695 adds a tasteful body kit, fog lamps, a larger rear spoiler and subtle “RS” badging. The package is a relatively affordable way to dress the car up a little bit, and the fact that it can be equipped on a basic trim level is appealing. It’s also worth noting that the “RS” letters have a long and storied history as an appearance package on Chevrolets, so some buyers will appreciate the continuity.

Following suit with the other hot hatches in the market, the Cruze gets a turbocharger, in fact the only engine available on the hatch is the 1.4L turbo four-cylinder engine. It puts out 153 horsepower and 177 lb-ft. of torque, which does a more than adequate job tossing the Cruze around with enough authority to be fun. The Cruze comes standard with a six-speed manual transmission, and that is what the test car came equipped with. Despite the dramatic decline in the popularity of manual transmissions, if there is a platform that lends itself well to rowing your own gears, small peppy hatchbacks are right up there, and with the generous torque from the turbo this should be a fun powertrain. 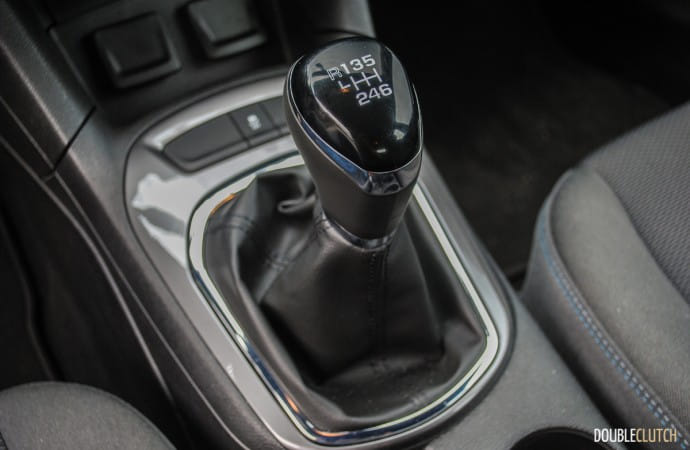 Unfortunately though, the six-speed manual in the Cruze is its greatest weak point. The light clutch offers very minimal feel, the gearbox feels rubbery and requires a fairly lengthy throw in order to change gears. That’s all somewhat forgivable, but the gearing in the car is a bigger issue; gears 2 through 5 are extremely long, which allows the little 1.4L’s RPMs to drop far out of the peak torque range. When that happens, the small displacement engine takes a while to spin the turbo back up and you’ve got little usable power.

To make matters even a little worse, the car’s digital readout in the gauge cluster attempts to guide drivers by suggesting when to shift up for economy, but those indicators are not realistic for most real-world driving situations, and following the guided suggestion typically only perpetuates the issue of dropping the RPMs out of the torque band. 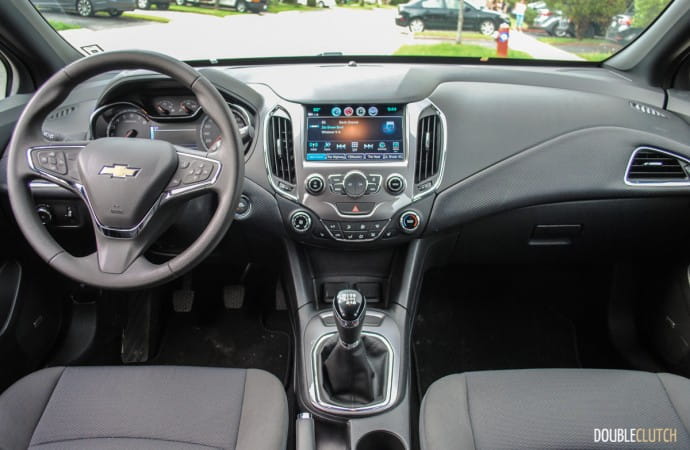 Ignoring the transmission’s shortcomings, the Cruze Hatch’s driving dynamics do hit on a few important high points including the quietest interior in the segment, a very well composed ride and excellent highway stability. The Cruze actually drives like a larger heavier car, which is great for long distance driving, or comfortable commuting. It does mean that cornering and spirited driving is generally less engaging and fun than in competitors such as the Civic or Mazda3.

Fuel economy is right where it needs to be in the segment and after a week of rush hour commuting, and relatively conservative driving the average sat at 7.2/100km. While not the most efficient compact hatch out there, that’s still a nice number and despite its turbocharger the Cruze is happy on regular 87-octane. If rowing your own gears isn’t for you, the Cruze hatch can be had with a traditional six-speed automatic, which also returns great fuel economy. 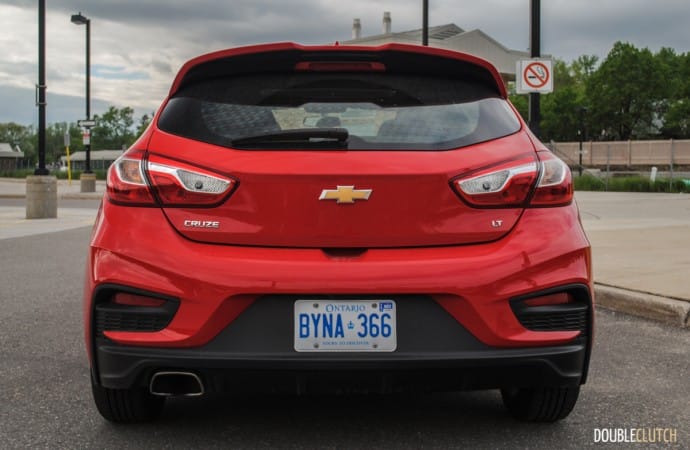 While the LT manual starts at $20,895 you’ll need to pony up a little extra for the automatic with a starting price of $22,345. Unlike the Cruze sedan which can be had in a truly basic stripped down trim, the hatch starts at the LT, meaning that even at the entry price it still comes fairly well equipped. Air conditioning, power windows/locks, cruise control, rear-view camera, heated front seats and even 10 air bags all come standard.

Even more tempting is the fact that even the most basic Cruze comes with Chevy’s MyLink infotainment system, supported by a 7” touch-screen. This system offers standard Apple CarPlay and Android Auto as well as built-in 4G LTE with Wi-Fi hotspot capability. The setup is not only class leading, but one of the better examples in the industry. The test car came well optioned with the Technology & Convenience package which seems pricey at $2,754, but does add a lot of desirable content including a power sunroof, larger 8” touchscreen, Bose sound system, eight-way power driver’s seat, proximity key, ambient interior lighting and a few more interior touches. 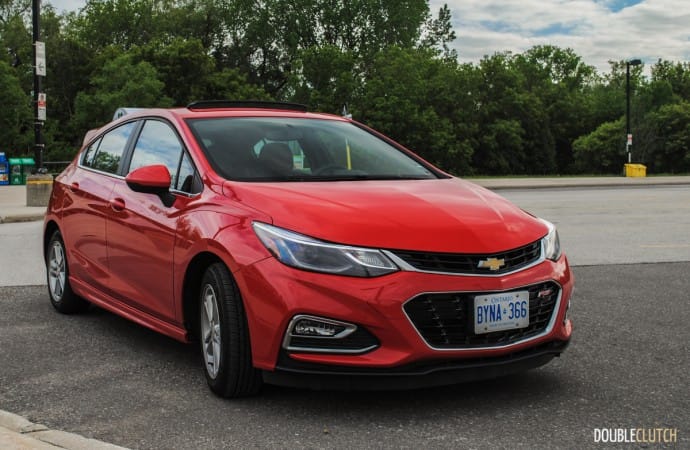 Speaking of the interior, it’s fairly simple, conservative and well laid out. Controls are easy to use and well within the driver’s reach. The materials used and overall fitment is as good as or better than the competition in this segment. One odd trait is that for some reason the designers at Chevy thought it was a good idea to use up some of the extra seat fabric by sticking big swatches of it on the dash – it doesn’t do much for the overall ambience. The rear seats are huge, with plenty of head and leg room for two adults, even three in a pinch. The cargo area follows suit as there is a deceivingly large amount of space behind the rear seats for cargo; or fold down the 60/40 split bench flat for even more space.

While the 2017 Chevrolet Cruze Hatchback LT isn’t perfect, it’s a welcomed entry into the compact hatch segment, and closely rivals the Volkswagen Golf (reviewed here) for its levels of refinement from a ride and noise perspective. It’s more mature and conservative than entries like the Mazda3, which outclass the Cruze when it comes to spirited driving dynamics. Even still, with the sunroof open, hatch loaded up for the weekend and the quality Bose system playing your favorite summer anthem, its hard not to smile and appreciate the Cruze’s great highway composure. If that sounds appealing, then the Cruze Hatchback with the automatic is well worth a good look. 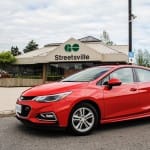 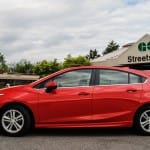 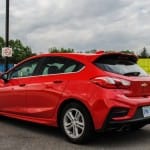 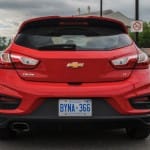 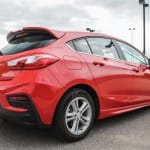 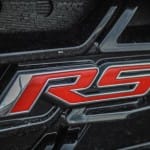 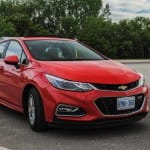 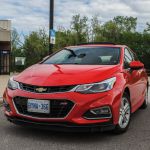 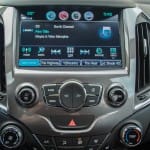 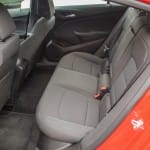 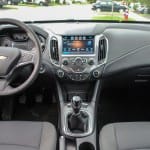 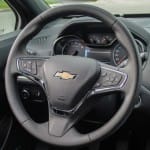 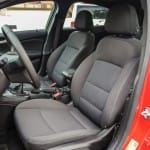 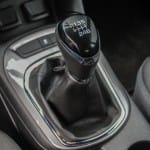 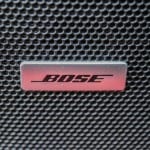 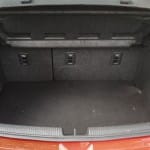