Infiniti took our industry by surprise in 2013 when they did a full name restructuring across the lineup. At the end of this process, all of their luxury sedan names began with “Q” and crossovers/SUVs with “QX”. We drove the Q50 when it was launched and awarded it our Best Sports Sedan award for the year 2013. Fast forward to now, when we were handed a 2015 Infiniti Q70L AWD, a car whose existence that even the keenest would be hard-pressed to remember. Nonetheless, this is currently the flagship luxury sedan in the Infiniti lineup, and I was excited to spend some time bonding with it. 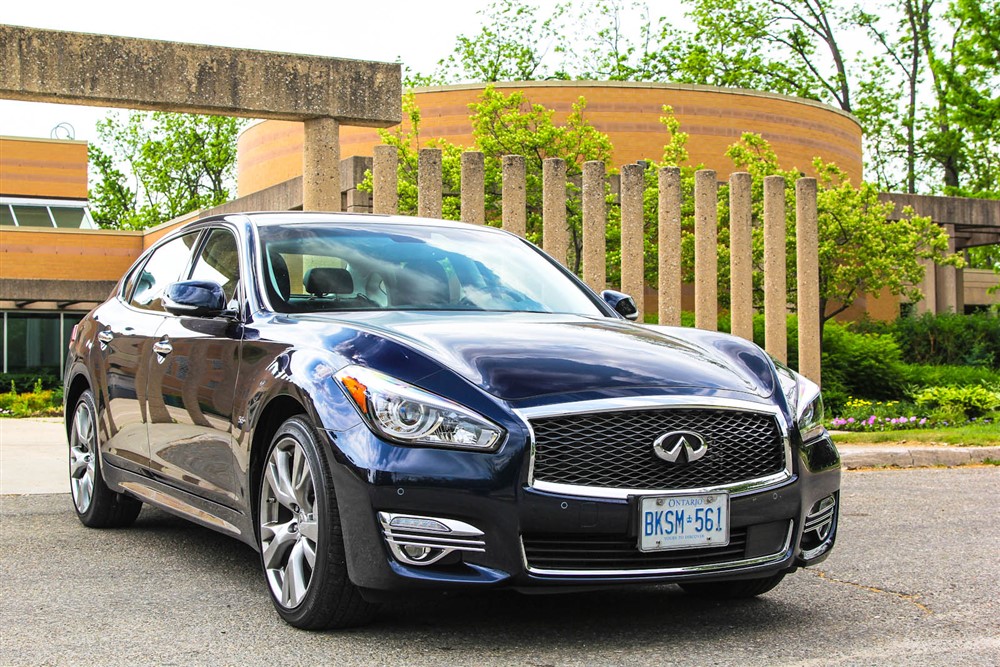 The Q70 name is not to be confused as a successor to the now-defunct Q45. The M35/M56 was renamed Q70, and the “L” designation on my particular tester refers to the long wheelbase. All Q70L models in Canada are sold in one length, with one engine option and one equipment configuration; the only choices buyers get are with regards to interior and exterior colours. I rather like this packaging because it simplifies the entire buying process and expedites production, and also eliminates the existence of oddly-optioned models that will sit on dealer lots unsold.

Adding 7.3” to the 194.7” length of the regular-wheelbase Q70, the Q70L sits at an overall length of 202” even. The wheelbase of the L is 5.9” longer, going from 114.2” to 120.1”, increasing rear legroom considerably. This adds a substantial stance to the big Infiniti, and in my opinion the Q70L is the best looking model. In the stunning Hermosa Blue my test car was painted, the sleek curves stand out especially, and the big sedan seriously gleams both in sunlight as well as under the gentle glow of Toronto’s streetlights. The black mesh grille and LED headlights (with LED accents) make the car look particularly elegant, and the tasteful presence of chrome is prevalent throughout the side profile as well as the rear end. 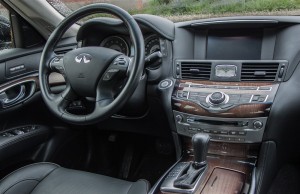 Modern and fresh design is important, but what’s really important about a flagship luxury sedan is the interior. Just over twenty-five years ago, the Lexus LS400 set a new bar for Japanese luxury in North America, and cars like this 2015 Infiniti Q70L go on to ensure that Japan maintains a great reputation for fit and finish. The leather seats are immensely comfortable, and all four are heated (front seats ventilate as well). The headliner and pillars are upholstered in a suede-like material, and the dashboard is finished in a pleasant glossy burlwood. There are plenty of adjustments for the front seats and I was quickly able to get comfortable, but the rear seats do not recline at all, something I would expect to see in a car of this caliber. For comparison, the Lexus LS460 and Hyundai Equus both are able to do this.

The excellent amount of rear legroom is not to be taken lightly; accommodations aboard the Q70L are limousine-like, not unsurprising for a car that’s technically longer than a Mercedes-Benz S-Class. This is a sedan that could be used to transport professional basketball players in a great deal of comfort, and only the truly gigantic would find reasons to complain. There is a centre armrest that folds down to reveal the rear heated seat controls, but the seatbacks themselves don’t actually fold forward, which could pose a problem if you need more cargo room than what the 422L trunk can hold.

The 2015 Infiniti Q70L is a relative bargain at $68,400, especially considering what the fine folks at Infiniti have packed into this plush cruiser. Intelligent all-wheel-drive is standard, along with the aforementioned heated/ventilated seats, a sunroof, dual-zone climate control, a navigation system with 8” touchscreen, 20” wheels, AroundView monitor, 16-speaker Bose surround sound system, blind spot warning, forward collision warning, backup collision warning, soft-close rear doors, and a power rear sunshade. Of course, there are many more features that are taken for granted at this price point. What I really would have liked to see the inclusion of, along with adjustable rear seats, is a panoramic sunroof, which would add significantly to the ambience in the otherwise-pleasant Infiniti.

Even with its 4300lb+ curb weight, the Q70L is no slouch. We drove the M35h Hybrid in 2013 and also came away with a similar reaction, but this is the full-blown 5.6L V8 seen in applications such as the Nissan Titan and Infiniti QX80. It’s a 32-valve DOHC V8 that spits out 416 horsepower all day long, as well as 414 lb-ft of torque at 4400rpm. Combined with ATTESA ET-S all-wheel-drive, the big Infiniti pulls hard and strong no matter what the occasion is. Using the drive mode selector to pick between “Eco”, “Standard”, “Sport”, and “Snow”, the Q70L is able to adapt to varying conditions or simply the mood of the driver. 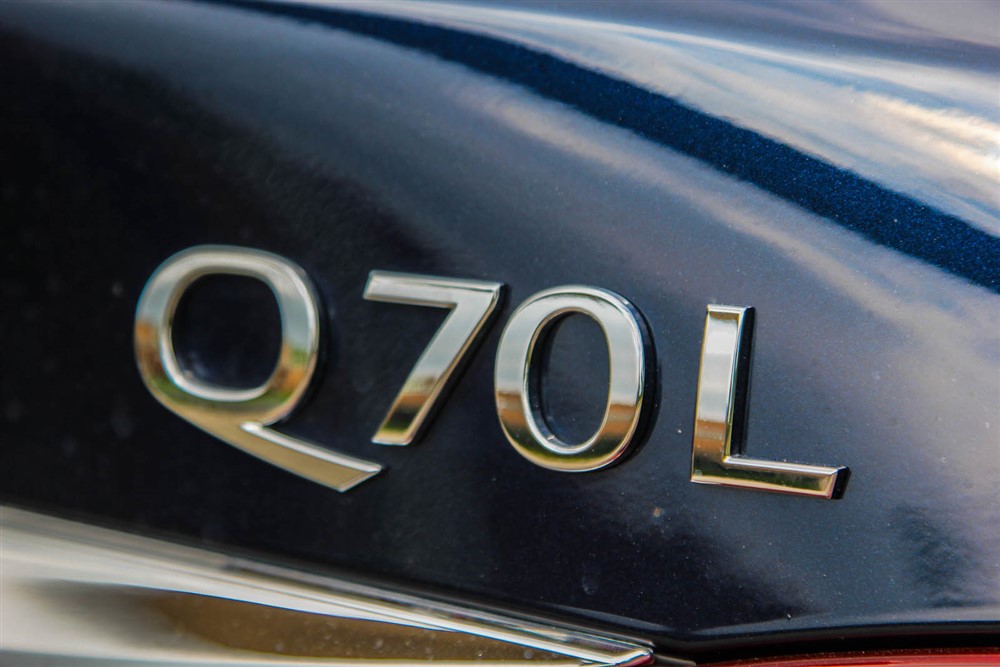 The only transmission is a 7-speed automatic with a very responsive manual-shift mode, one I toyed with in the drive mode in the “Sport” setting. Something I found notable is the lack of paddle shifters, but who are we kidding – this is a fantastic luxury sedan, not a sports car. When left in automatic mode, this gearbox has DRM (Downshift Rev Matching), which, as expected, rev-matches downshifts for that added sporty feel. It also has Infiniti’s Adaptive Shift Control technology that’s able to quickly detect the driver’s unique driving style and adapt to it. This essentially negates the need to use the manual shift mode for those not hell-bent on changing gears on their own.

Though not the best handler thanks to its sheer size and suspension calibration aimed towards comfort rather than sportiness, the Infiniti is able to hold its own. Ride quality is one area where, unsurprisingly, the car excels. Even with the 20” wheels on low profile tires, the Q70L has a ride that is supple and inspiring, and road noise is at a bare minimum. This is a car that I would be happy to jump into with family or friends and drive straight to Florida for the perfect getaway. Thanks to its all-wheel-drive system, it’s also perfect for our climate, though I’d opt for some winter tires for the cold season. 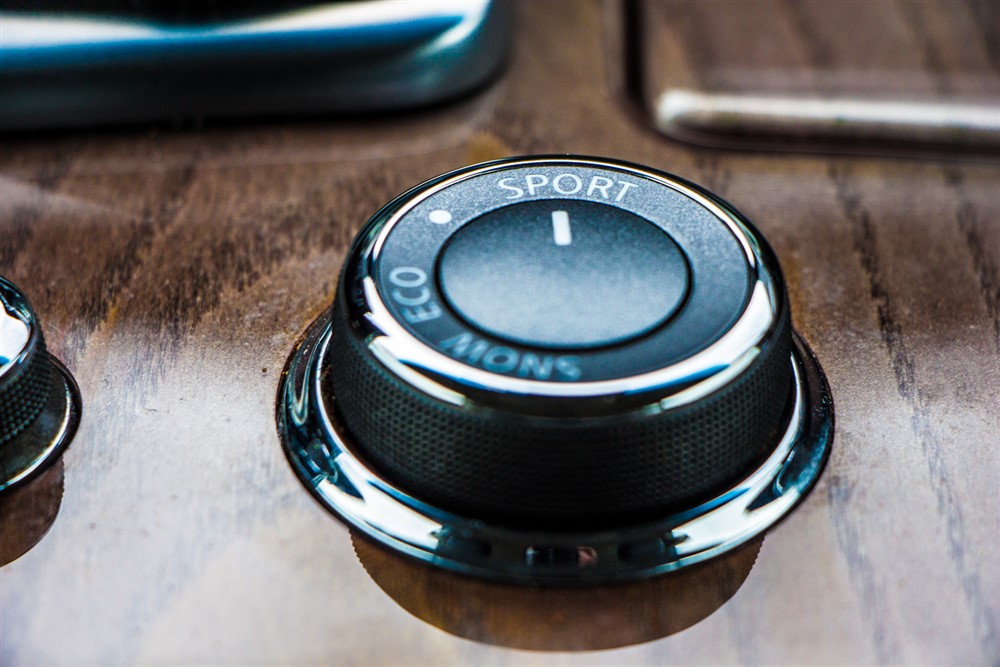 V8s aren’t exactly known for their fuel economy, and the Q70L is no exception. We averaged 14.2L/100km in the city and 10.4L/100km on the highway, for a combined rating of 12L/100km. It’s worth noting that this specific tester wasn’t returning ideal fuel efficiency numbers when it arrived to us, so we’re chalking it up to it previously having been fed regular fuel. Refueling with 91-octane premium as Infiniti recommends helped considerably with both fuel efficiency as well as overall engine smoothness.

Like I said initially, this isn’t a Q45 successor that diehard Infiniti buffs have been waiting for. As with any car, it has its flaws – namely the dated infotainment system that hasn’t changed in over half a decade, and the slow steering response. Those who don’t need the big V8 engine or the longer wheelbase can save some dough and opt for the “regular” Q70, which starts at just $56,900. However, the 2015 Infiniti Q70L provides a driving experience that’s very obviously Infiniti, a brand that represents excellence and over all else, elegance and longetivity.