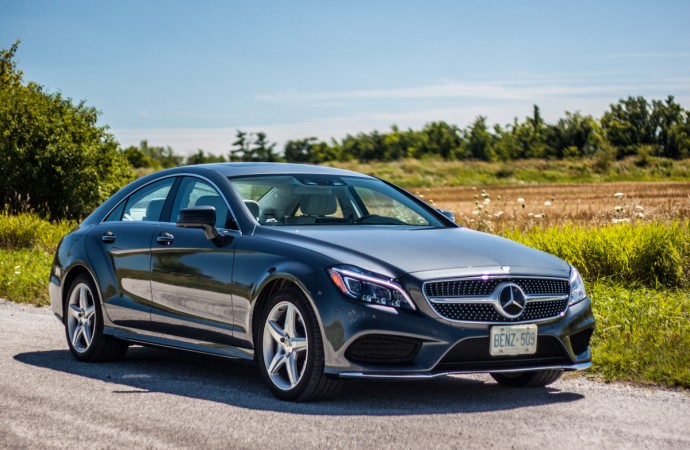 The new CLS400 is an exquisite saloon car with coupé-like lines and wonderful road manners.

The Mercedes-Benz CLS debuted approximately a decade ago, as a 2005 model. The stunning design took the entire industry by surprise, and the four-door coupé body style was born. Since then, there have been offerings from BMW, Audi, and Porsche that echo the CLS’ styling. Even in the mainstream class, the Volkswagen CC also follows the same formula. This year, there have been a number of changes that freshen up the car to stand up well to its competitors, including an all-new entry-level engine. We borrowed a 2015 Mercedes-Benz CLS400 4MATIC to play with and see how the latest model stacks up to tough competition. 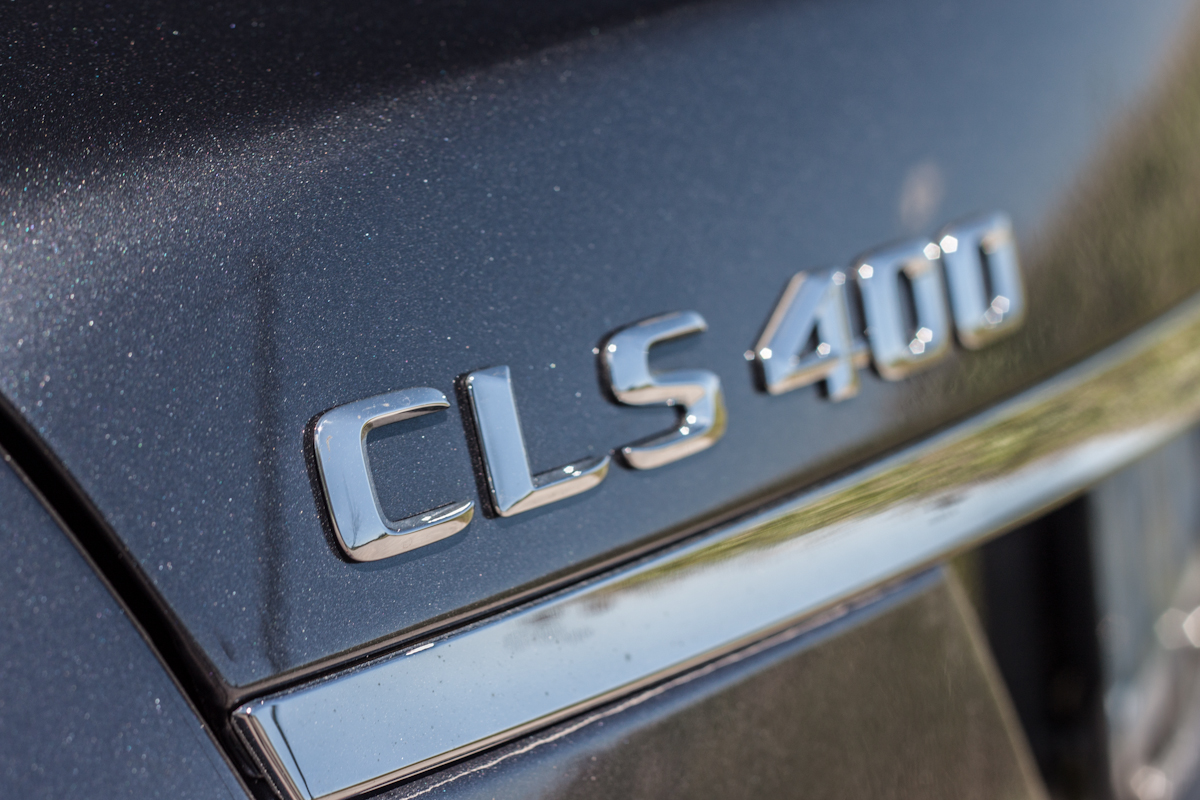 Our previous experiences have rendered the BMW 6-series Gran Coupe and the Audi A7 to be favourites in our stable, but the CLS still gets brownie points for being the pioneer in the segment. Its raked roofline and swooping body mimic that of a proper coupé, and the frameless windows and low-slung doors only echo this image more. The car is a born stunner, with flawless lines that clearly prioritize form over function. The first-generation (2005-2009) model was attractive at first but didn’t really age well. This one, which originally debuted in 2010 and freshened for 2015, uses more contemporary design cues and I expect it will age far better.

The new motor, which is also now offered on the C and E-Class models, is a 3.0L twin-turbocharged V6. It pushes 329 horsepower and 354 lb-ft of torque, peaking right at 1600RPM. The keen will observe that these numbers are very similar to the Audi A7 3.0T. Granted, the CLS, with the exception of the fire-breathing CLS63, is geared towards smoothness and overall comfort rather than sheer power. That being said, it’s not slow by any means. The car is serene and buttery smooth, all while packing a degree of charm that’s very typical to the Mercedes-Benz brand. 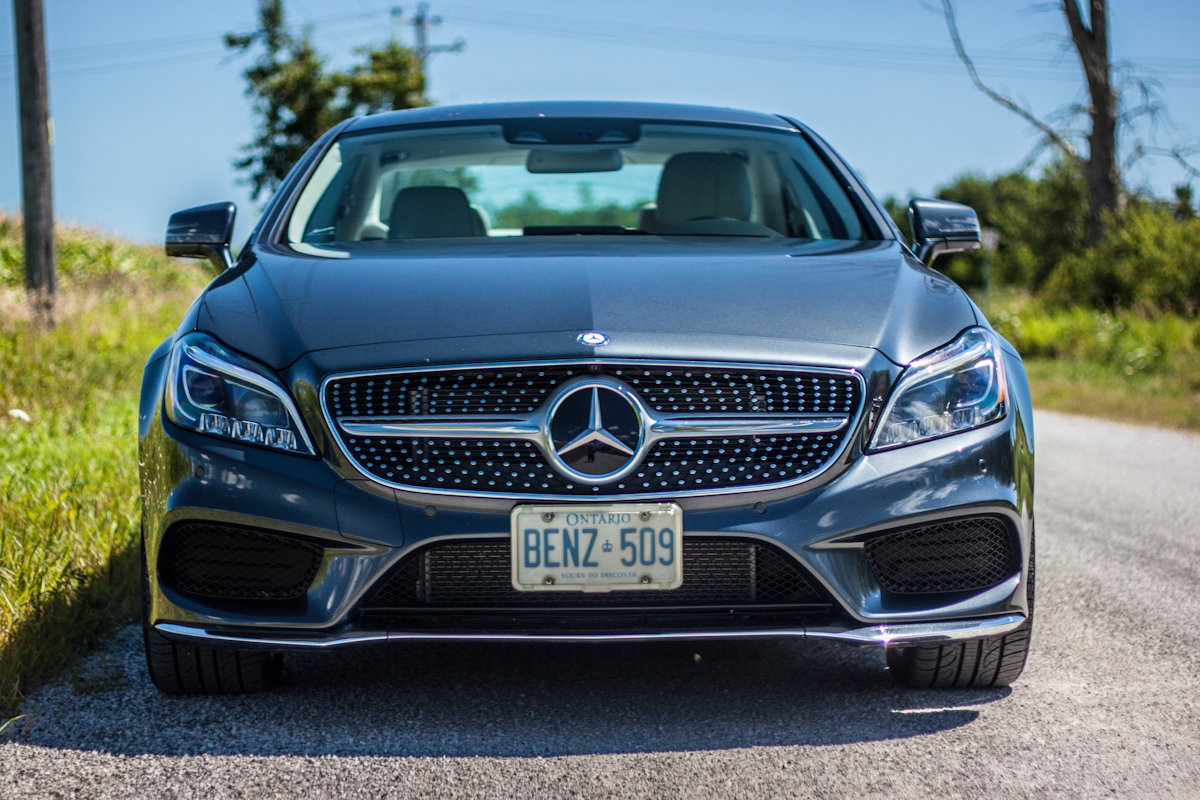 All 329 ponies are put down via a 7GTronic seven-speed automatic transmission; no dual clutch option is offered. The gearbox, like the rest of the car, is efficient, effortless, and quick to shift. The selectable “Sport” mode definitely livens the car up, but I didn’t find it to do much with the throttle response. This mode seemed to focus specifically on the transmission’s behaviour rather than remapping the engine geometry. There’s also an “Eco” mode that causes early upshifts and a slightly stiffer throttle, and I found that the CLS defaults to this mode each time it’s started up.

Road manners are impeccable; the CLS400 rides like a Mercedes-Benz should. It’s soft and absorbs bumps smoothly, while maintaining a level of confidence that the Germans always do right. The steering is equally confident and decently responsive; as responsive as a car of this size and weight can be. The CLS is surprisingly nimble and quick to react, with tires that grip for days and grabby brakes. With regards to its driving dynamics, there are zero complaints from me – it’s a dream to drive. 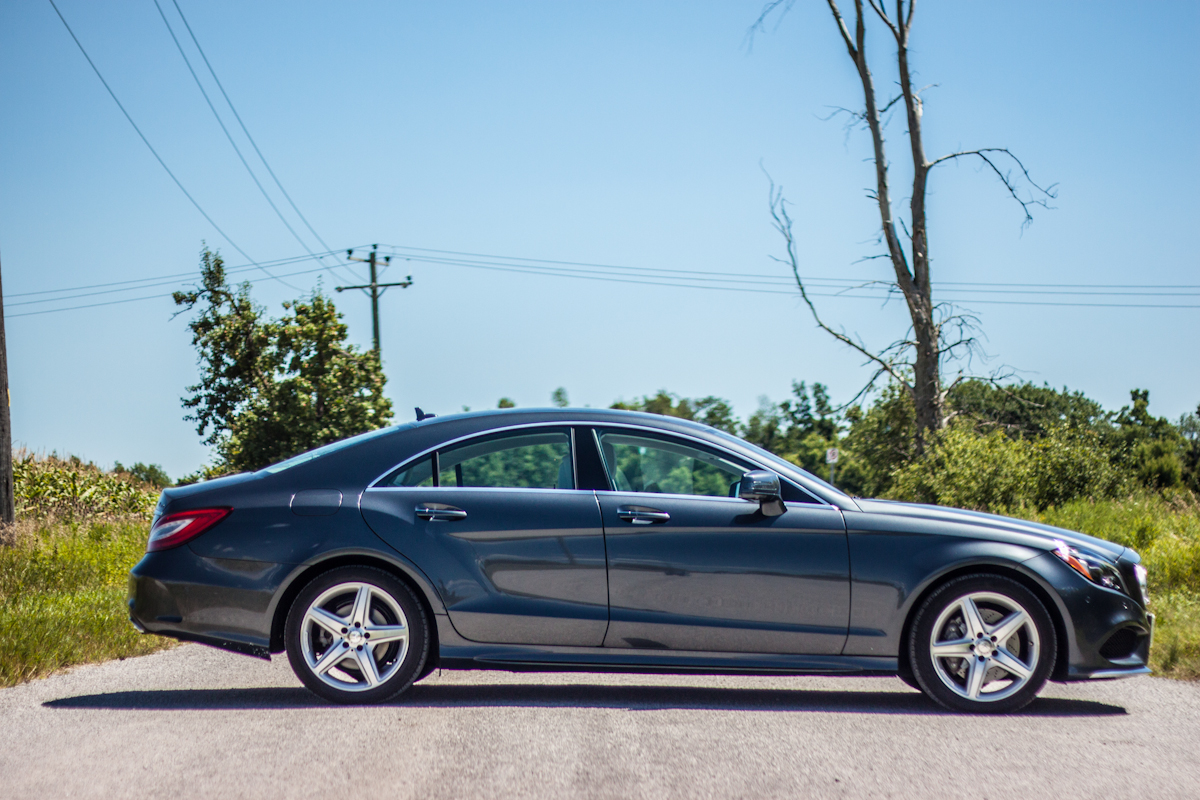 The truly astonishing thing about the CLS400 is how efficient it ended up being. Firstly, the massive fuel tank (80L to be exact) means the car can go very close to 1000km on a tank if driven frugally. The range is so long that we actually didn’t get a chance to test an entire combined cycle, but our test average over 400km ended up being 9.2L/100km. If driven solely as a highway cruiser, numbers can dip as low as 7.6L/100km. Of course, these numbers are based on ideal conditions using 91-octane fuel (which should be the case anyway, because this twin-turbocharged motor requires it).

All 2015 CLS models sold in the Canadian market are equipped with 4MATIC all-wheel-drive. The CLS400 has a base price of $75,900, and our test vehicle had a bunch of options added on. The $5,950 Premium Package includes adaptive high-beam assist, a rear window sunshade, heated steering wheel and rear seats, lane keep assist, 360-degree camera for park assist, and the Harman/Kardon Logic7 surround sound system. I would assume most CLS models are sold with this package. For $2,700, the Intelligent Drive Package adds a series of driver aids including Active Blind Spot Assist, Active Lane Keeping Assist, Pre-Safe Braking, and Distronic Plus adaptive cruise control. Finally, the Sport Package adds 18” AMG wheels, Sport Braking System, sport suspension, and my personal favourite, the Drive-Dynamic driver’s multicontour seat. Total sticker price is just shy of $89,000.

What I found to be really special about the CLS400 is the sheer amount of technology and seamlessness added to the car. The COMAND controller has taken an old infotainment system and perfected it. Basic functions of this system have remained fundamentally the same, but the system has improved to a point of flawlessness. The large colour display situated atop the dashboard controls everything including seat massage and vehicle settings, and there’s a secondary display within the classic Mercedes-Benz instrument cluster that also toggles many secondary controls.

A neat gizmo packed deep into the CLS400’s long list of technology is the active side bolstering on the driver’s seat. This is something that I initially presumed would be a bit of a gimmick, but like all other technology pioneered by Mercedes-Benz, it’s seriously impressive. The way it works is that each time the steering wheel is turned with the car in motion, the “opposite side” of the driver’s seat inflates to minimize movement of your body. For example, on a hard right turn, the left bolster inflates to keep the driver’s body in the completely upright position. After the vehicle straightens out, the bolster subtly deflates.

Quality of materials in the cabin is on par with my expectations for the Mercedes-Benz brand. Everything around you is either leather or soft-touch, with beautiful finished wood accents throughout the dashboard. The LED ambient lighting is a stunning touch, and the colours are customizable between “Polar”, “Solar”, and “Neutral”. All of the interior lighting is LED, and the map lights are particularly bright and cheerful. Exterior LED daytime running lights are among the best in the industry, and the taillights are equally stunning. There will be no mistaking this car for a Volkswagen CC.

Interior volume is compromised a little bit thanks to the low roofline. Legroom is pretty sufficient and doesn’t feel any different from the E-Class, but headroom is definitely lacking for taller folk like our team. This is especially the case in the rear; the low door-lines make it a bit of a challenge to get in and out, and overall headroom is pretty limited. Those who frequently carry adult passengers may want to look at the E-Class instead. 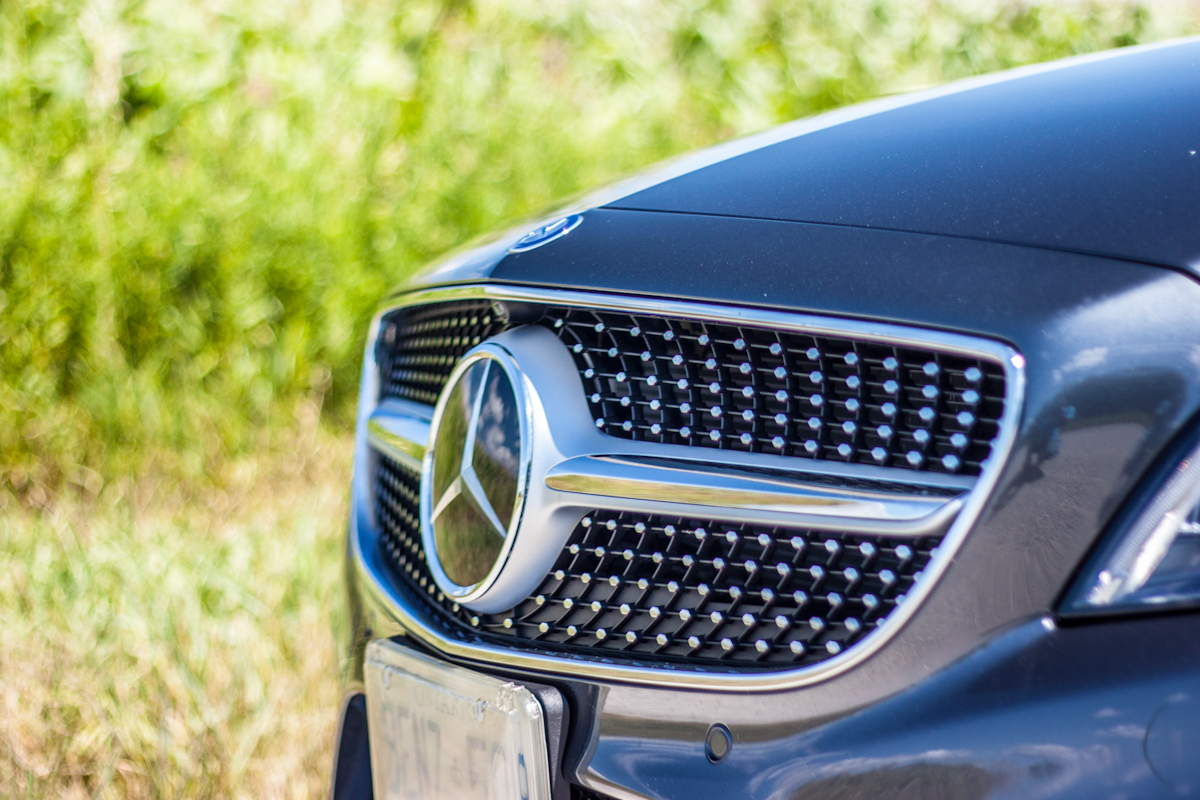 There isn’t much not to like about the 2015 Mercedes-Benz CLS400, but we found a few small points that could be bothersome over time. For instance, the reverse camera only engages if the infotainment system is powered on. Turning off the stereo using the power button turns off the navigation display along with all other infotainment features, also disabling the camera. Additionally, sightlines are limited ever so slightly thanks to the small windows aboard the CLS.

The CLS sits in an interesting spot in Mercedes-Benz’s lineup. It’s slotted above the E-Class and below the flagship S-Class. Interior trimmings as well as the overall platform are both shared with the E-Class, but the CLS is a bit longer and lower with its swooped roofline. The four-seat setup, with a full center console that goes right through the rear seats as well, is elegant and definitely helps with the CLS’ appeal as a four-door coupé. The catch here is that on the odd occasion when you need that fifth seat for a passenger, there isn’t one available at all. 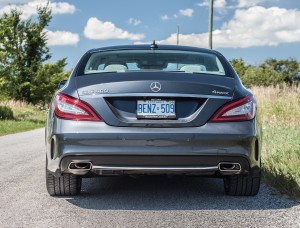 The 2015 Mercedes-Benz CLS400 4MATIC is a car that’s designed for a very specific clientele. Typical premium buyers and Mercedes-Benz loyalists may choose to opt for the more traditional design of the E-Class, but the CLS line is aimed at the out-of-the-box thinker. It may have some small drawbacks with regards to space and interior packaging, but these come with an added dash of style, flair, and great driving dynamics. Plus, thanks to 4MATIC all-wheel-drive, it can seamlessly be used year-round in most climates. The new CLS400 is an exquisite saloon car with coupé-like lines, wonderful road manners, and the safety and luxury that the Mercedes-Benz brand is so highly regarded for. 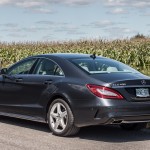 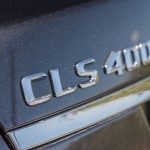 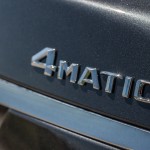 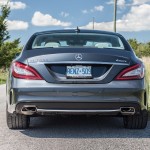 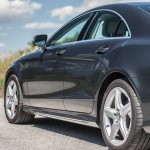 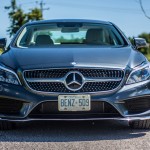 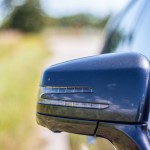 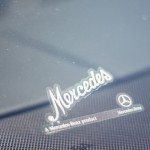 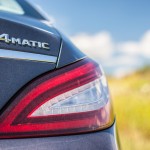 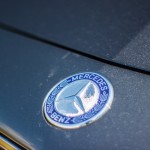 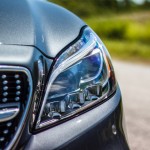 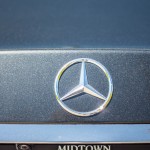 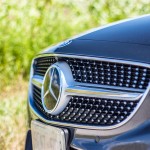 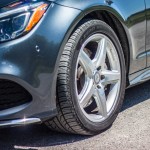 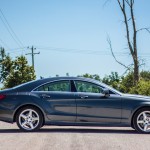 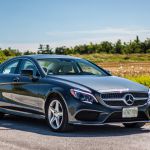 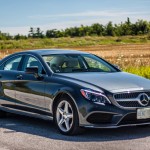 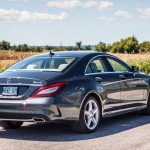