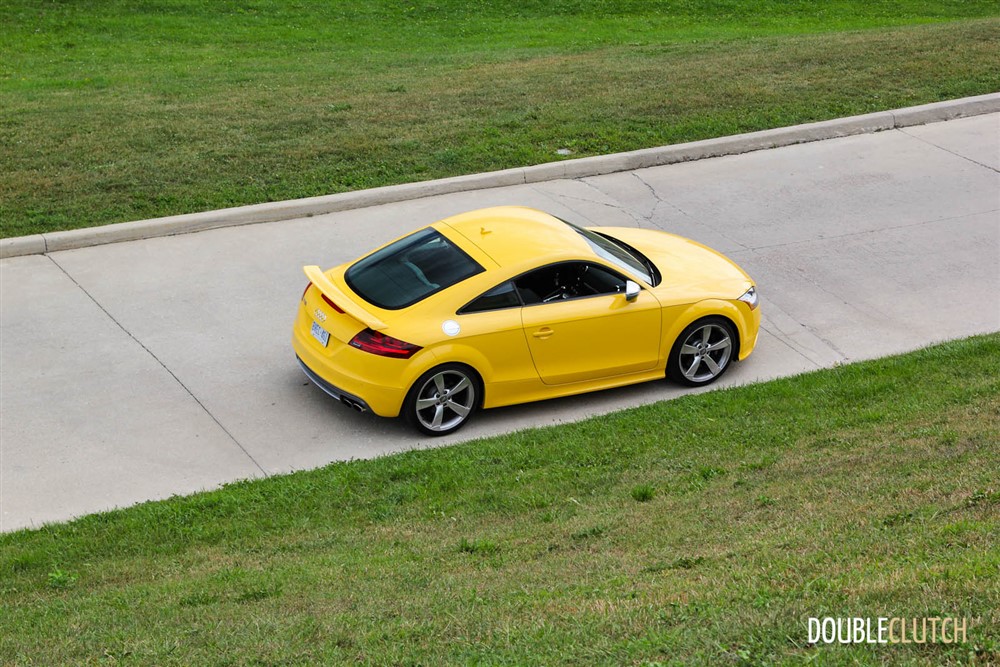 A great buy for those who adore the raw simplicity and overall charisma of the TT line.

As a car guy, I have always liked the Porsche 911. Recently, I was also on a Volkswagen event where I got to drive a properly spec’d Beetle. However, short of the wild-child TT RS last year, I had yet to experience a solid seller for Audi, a car that looks like the design lovechild of the two cars. With a full redesign and overhaul coming early next year, I was glad to spend a week with the 2015 Audi TT-S Competition Coupe to gather some impressions. 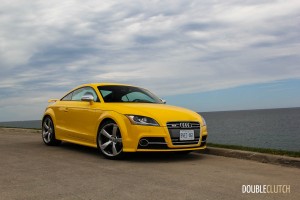 I have always liked the Audi TT. Its lines truly do blend the best angles of both the Porsche 911 and the Volkswagen Beetle, and this is a very good thing. It’s a beautifully designed car with the typical solid interior feel of any other Audi and the cockpit of a true driver’s car. The short-lived TT-RS with its turbocharged 5-cylinder engine and excellent manual gearbox was akin to a tiger that constantly wants to play games, so how can you really go wrong? This Competition Coupe is a limited production car (only 500 units) that is a “last hurrah” to the existing TT.
Well, the Audi TT-S isn’t quite the TT-RS nor does it sound like one, but its character isn’t all that different. This car has the turbocharged 2.0L 4-cylinder that’s a staple throughout the Audi and Volkswagen family. It’s a great motor that does the job quite nicely. Where the regular TT gets away with just over 200 horsepower, the sportier TT-S Competition Coupe gets 265 and 258 lb-ft of torque. My tester was equipped with the excellent S-tronic dual-clutch gearbox and quattro all-wheel-drive. 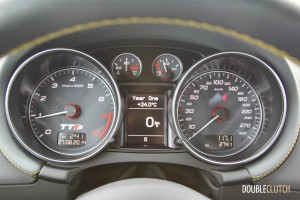 Booting around downtown Toronto at city speeds, the TT-S isn’t particularly exciting.  It’s just as easy to drive and without engaging Sport mode, there is some turbo lag. However, the second you get on the open highway or some empty country roads, the Imola Yellow hornet comes alive. The exhaust sounds awesome too, shifts are confirmed with a familiar “pop” that you wouldn’t get from a manual transmission. While TTs have been sold with a conventional stick, I think the Audi S-tronic is one gearbox that I wouldn’t mind having at all for the daily commute.

As previously stated, engaging “Sport” mode on the transmission eliminates a considerable amount of the turbo lag and completely wakes the engine up. There is also a “S” button that engages Sport mode for the rest of the car, that improves throttle response as well as tweaks the suspension. Living downtown Toronto, the roads are in such poor shape that I preferred to leave the suspension in its softer position in favour of my comfort. I will say though that the change is staggering, and definitely helps the TT-S feel like more of a real sports car. 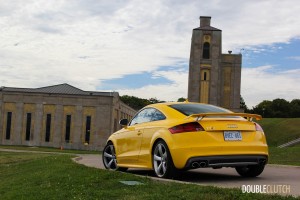 The all-wheel-drive system means the TT-S is an excellent year-round companion. Some people (myself included) have toy cars they put away for the winter, but this is one I would encourage driving year-round. It handles beautifully – steering is nicely weighted and doesn’t feel artificial at all. There’s just enough power assist to make slow-speed parking lot maneuvers a cinch, but not so much that it feels too light. I can only imagine how much of a blast the TT-S would be in winter conditions with the stability and traction control systems turned off.

At 6’1/175lbs, I found the driving position of the Audi TT-S to be spot on. The car itself is so small that it feels like a cocoon, and everything is within arm’s reach. Audi has put some great seats in that don’t feel unlike those in the flagship R8, and in the Competition model the entire interior is finished with yellow stitching. The larger baseball stitching on the seats has been a feature unique to TTs for well over a decade, and it looks neat. While the front seats are great, rear seat legroom leaves much to be desired. 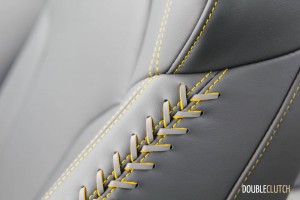 Accommodations in the back of the TT-S aren’t all that far from the Porsche 911. My particular test car had about 2500km on it, but the rear seatbelts were still buckled, leading me to presume that nobody had ever been in the back of this car before. I actually did have to put a passenger back there, and she wasn’t all that pleased. This passenger was about 5’5/100lbs, and found her head hitting the rear window as well. I’m not exactly complaining though – you don’t buy an Audi TT if rear legroom is even close to the top of your priority list.

The interior is typical Audi good – my car came equipped with leather seats (with “TT-S” embroidered into them), as well as navigation with the MMI media interface. It also had automatic climate control, LED daytime running lights, automatic HID headlights, and a Bose stereo system that sounds surprisingly good. Although this will change slightly with the upcoming redesigned TT, the outgoing car feels a lot like the R8’s kid brother. It lacks a few interior gizmos in favour of a proper driving experience that gives the feeling of a real sports car. 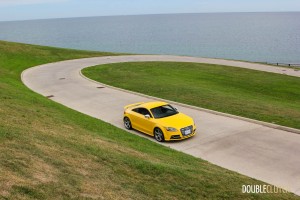 For instance, there is no intelligent key; it’s an old-fashioned Audi switchblade identical to the one in the R8. I personally prefer it this way though; when I’m driving a proper sports car like this, it’s satisfying to actually turn a key to hear the engine rumble to life. There also isn’t a reverse camera. I don’t really mind the lack of a camera though; the TT is pint-sized and exceptionally easy to park.

I averaged a very reasonable 9.8L/100km on premium fuel over the course of my week with the baby bumblebee, and it was a great week. At a little shy of $65,000 as-tested, the TT-S isn’t exactly cheap. The Competition Coupe is not only a limited edition; it’s a great buy for those who adore the raw simplicity and overall charisma of the TT line. It’s a lovely thing, this. If recent Audis are any indication, the new one has to be even better, but I can’t help but feel saddened that some of the rawness of the old car will likely become history. Development and technology is great and all, but I won’t lie – it was nice to have a physical key to turn. The fact that Audi was able to make this limited-run car to commemorate a half million TTs sold is, well, something sensational! 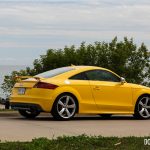 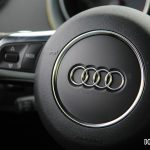 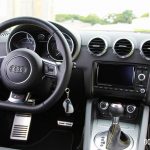 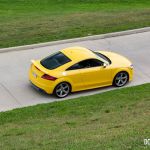 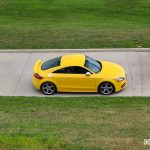 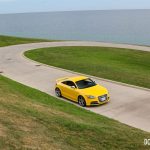 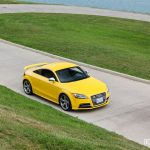 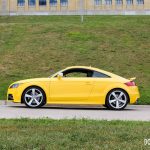 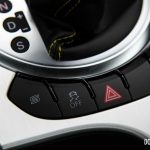 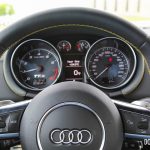 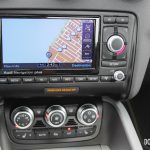 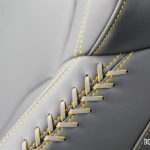 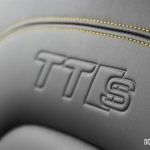 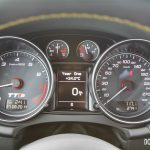 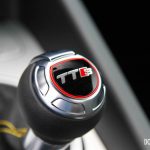 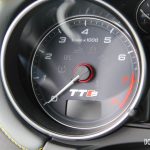 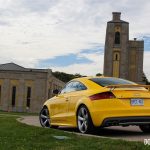 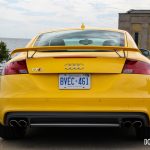 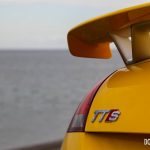 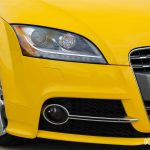 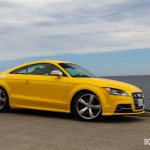 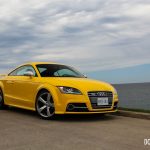