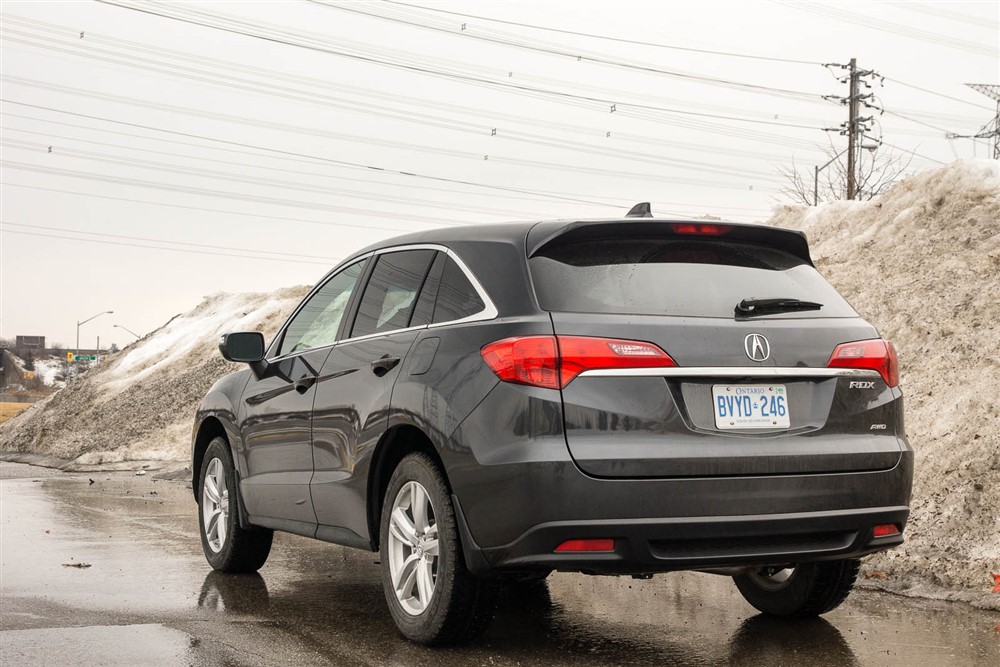 Getting a bit dated, but still an excellent choice |

The Acura RDX is one of those vehicles that flies under the radar, quietly and competently.

We’ve long known Honda to more-or-less march to the beat of their own drum for many years now. Steadfastly resisting V8 and rear-drive powertrains, they’ve stuck to what they know best. As the compact luxury crossover utility vehicle (CUV) market exploded, Acura (and Honda, by extension) knew they would have to jump in with something unique, in order to stand out from the formula that nearly everybody else was copying in one form or another. 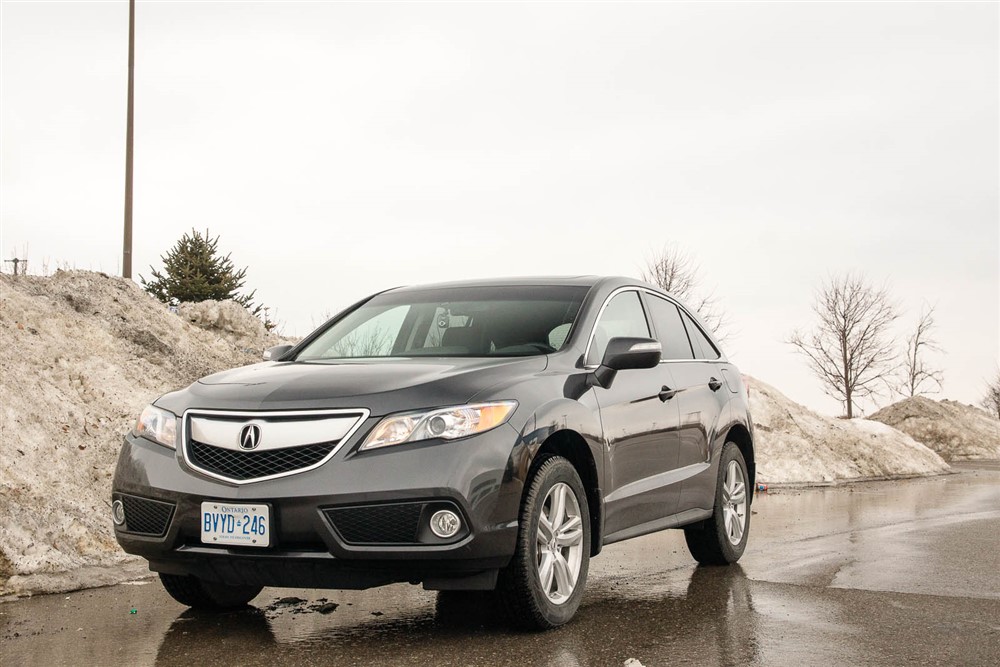 Enter the Acura RDX. Introduced in 2007, the RDX represented what was essentially an engineer’s exercise. Loosely based on the very popular Honda CR-V, the first-generation RDX swapped out the mainstream hardware for a lot of technologies and Honda know-how that made it an interesting choice for those who could understand the changes made. Physically, the RDX wasn’t too far off of the CR-V, but major styling differences set it apart from its mainstream cousin. Acura’s controversial “power plenum” grille made an appearance through the tail-end of the first-generation’s five-year run.

Back in 2007, turbocharged four-cylinder engines were not anywhere as widespread as they are today. Turbocharging wasn’t even a typical Honda trait, and so the upgraded 2.3L turbo-four went up against larger V6s at the time. The RDX also featured Acura’s SH-AWD, a very advanced (and still advanced to this day) traction system that was capable of moving torque delivery around from not only the front and rear axle, but vary that rearward torque bias towards the outside rear wheel during cornering. This helped rotate the RDX during hard cornering, a feature not seen anywhere else in the compact SUV market at the time. 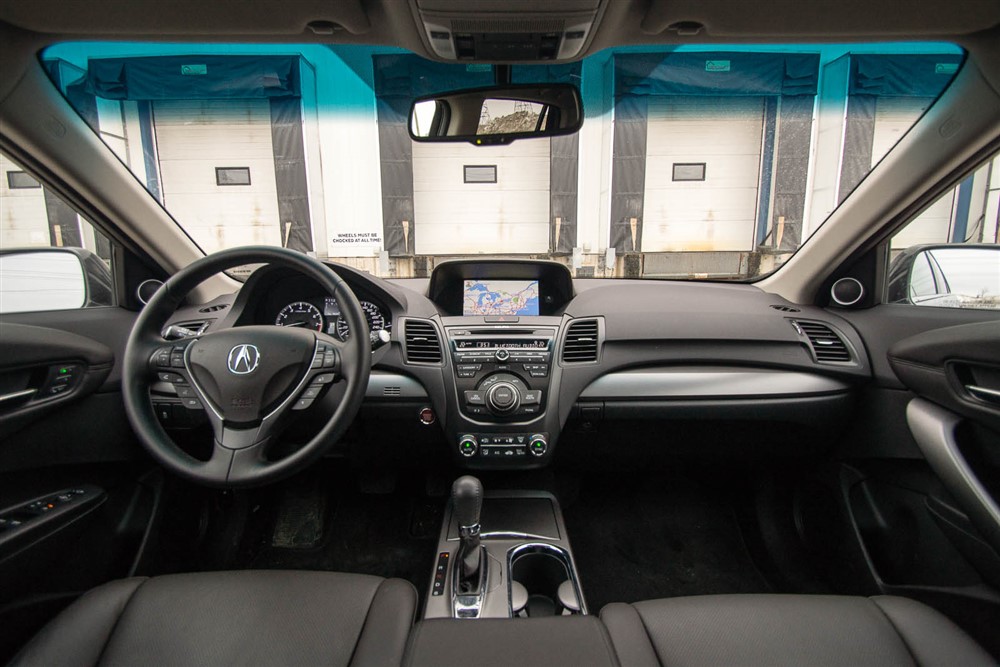 The original Acura RDX wasn’t a car for everybody, and as a result, some of its technologies and engineering design choices either went un-noticed or overlooked. It could be argued that Acura skewed a little too close to the “techno-nerdy” customer with the first-generation RDX. When the current second-generation RDX came around, many voiced their displeasure about its simpler engineering and design, but the market will always make the big decisions. I take a look at the more mainstream 2015 Acura RDX with the Tech package, painted a shade of Graphite Luster Metallic.

The RDX being tested here was introduced back in 2013, bringing with it many changes inside and out. Gone is the upright greenhouse shape, and in comes a slightly elongated appearance, thanks to the rounded upper window-line. The second-generation model is only 3cm longer than the original, but is also 3cm shorter in height, making for a more squat and sporty appearance (as far as CUVs go). Still strictly a two-row compact luxury CUV, the proportions fit right in with hot-selling competitors like the Audi Q5, BMW X3, and the Lexus NX, just to name a few. The power plenum grille returns once again, but Acura has managed to integrate it fairly well into the front-end styling of the RDX. High-intensity discharge headlights are standard equipment, as are the 18-inch aluminum wheels. 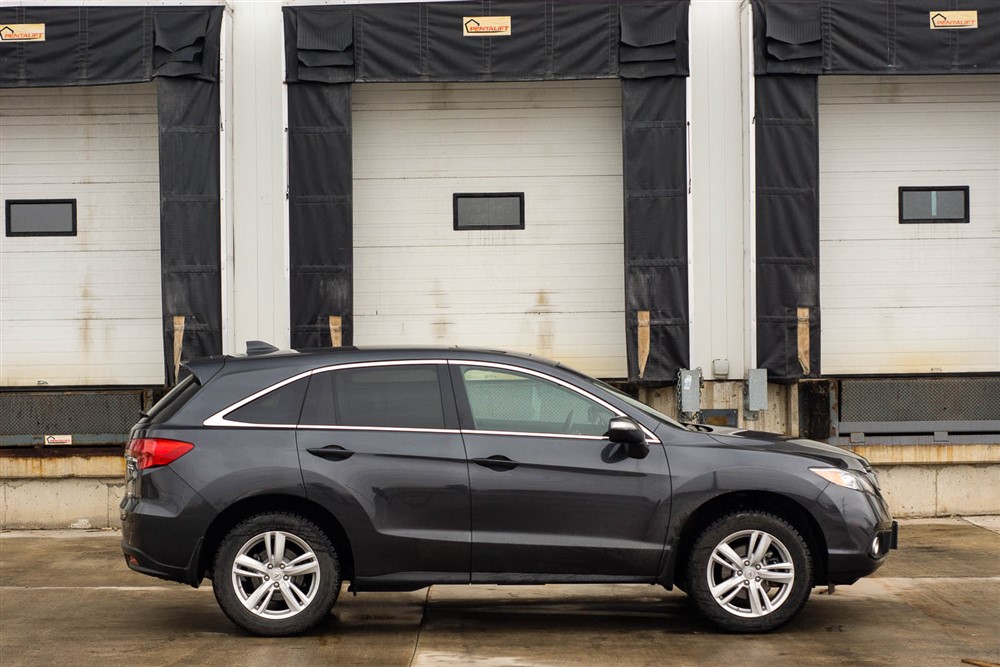 One might argue that the more-conservative new shape for the second-generation apes the competition a little too closely. In the world of so many me-too compact luxury crossover utility vehicles, not rocking the boat with something too polarizing (the Lexus NX comes to mind) will appeal to those simply looking for a nicer “right-sized” vehicle for their young families.

Inside, the familiar Acura interior makes an appearance once again in the RDX. For those who like physical buttons, Acura has you covered in the RDX. There are fifteen physical push buttons on the front of the steering wheel alone, and another array on the centre stack that controls the satellite navigation (part of the Technology package) system as well as entertainment centre. Newer models from Acura feature a second touchscreen that replace some of the physical buttons (such as the standard heated seat controls), but I personally prefer to be able to feel around for the desired controls by feel, instead of stabbing away at a resistive touchscreen. Interior accommodations are generous – I especially liked the relatively good visibility all around. A reverse camera is standard equipment, as are the leather seats and power moonroof. The Technology Package is about the only option you can choose from, and it adds the aforementioned satellite navigation, upgraded audio, and the all-important power rear tailgate. 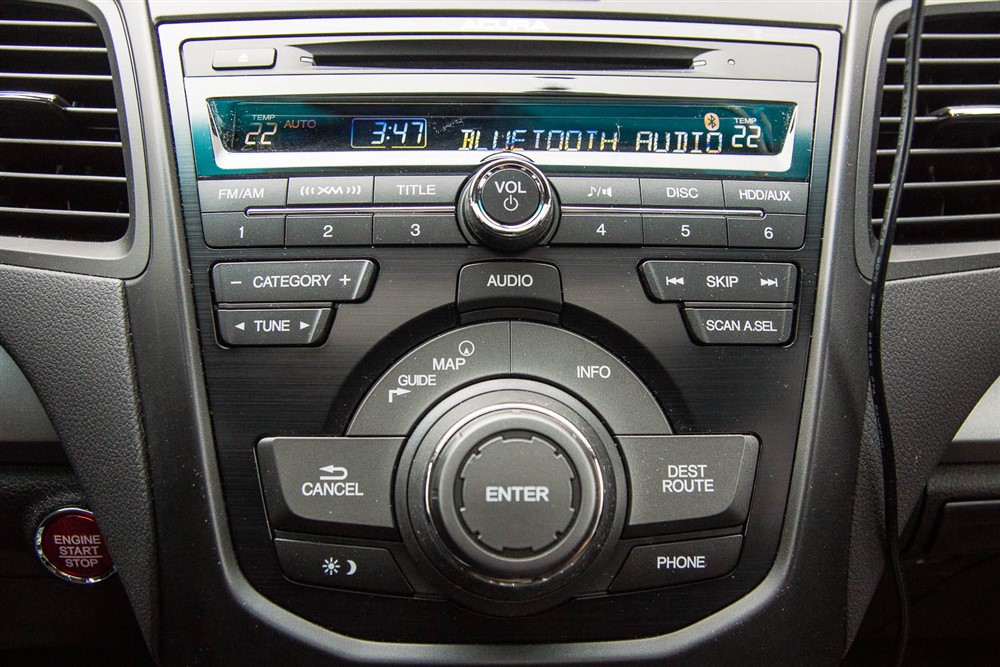 Under the hood is where the RDX departs significantly from its predecessor. Instead of the turbocharged four-cylinder engine that made the RDX interesting, Acura has dropped in their workhorse 3.5L V6 gasoline engine. Lifted from the Acura parts-bin, minus its direct-injection system, this fairly conventional V6 delivers a healthy 273hp at 6200rpm and 251 lb-ft of torque at 5000rpm. It is partnered up with a six-speed automatic transmission with Sequential SportShift paddle shifters. Gone is the high-tech Super Handling All-Wheel Drive, however. In its place is a more basic slip-and-grip AWD system that sends some torque to the rear axle in the event the two front wheels lose traction.

In practice, in the urban environment that these compact luxury CUVs will likely spend the vast majority of their time, the passive AWD system will get the job done. Torque steer wasn’t detectable like it was on the Lexus NX. I particularly liked the six-speed auto – shift quality is very crisp. The V6 engine also has the benefit of being much smoother through its entire rev range. Most of the RDX’s competitors have moved to four-cylinder powertrains (at least in base trim) for various reasons, so I commend Acura’s choice of a V6 from a comfort and luxury point of view. 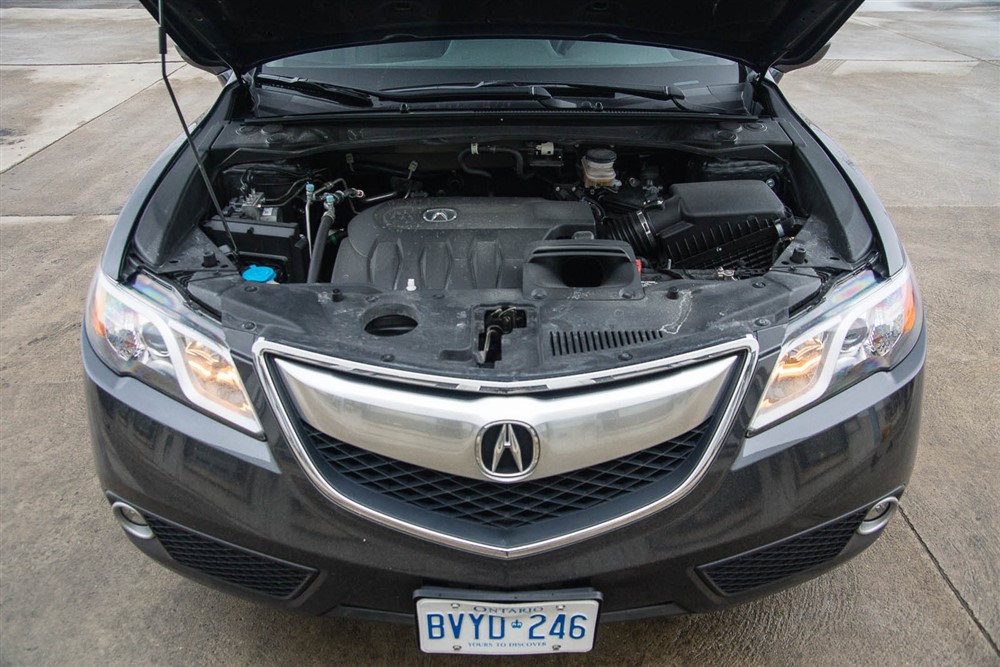 The 3.5L V6 not only produces more horsepower than the former turbo-four, but it also consumes less fuel. Acura rates the 2015 RDX at 12.1L/100km in the city, 8.7L/100km on the highway, and 10.6L/100km in a combined cycle. True to form, I ended up with a week-long average of 10.7L/100km, over about 800km of mixed driving. The competitive highway consumption figure is helped by Acura’s Variable Cylinder Management system that fires only three or four, of six cylinders at low load. This transition is almost seamless, but does help bring down that instantaneous fuel efficiency reading. The RDX will accept 60L of premium fuel.

Acura does a good job keeping the pricing structure simple. With the RDX, there are really only two different trim levels to choose from. Both are very well equipped, with the Tech package bringing in the headline satellite navigation feature. The RDX base starts at a competitive $41,690, and my specific RDX Tech starts (and ends) at $44,690. There are no additional options or packages – all you need to add is tax and the various dealer fees. 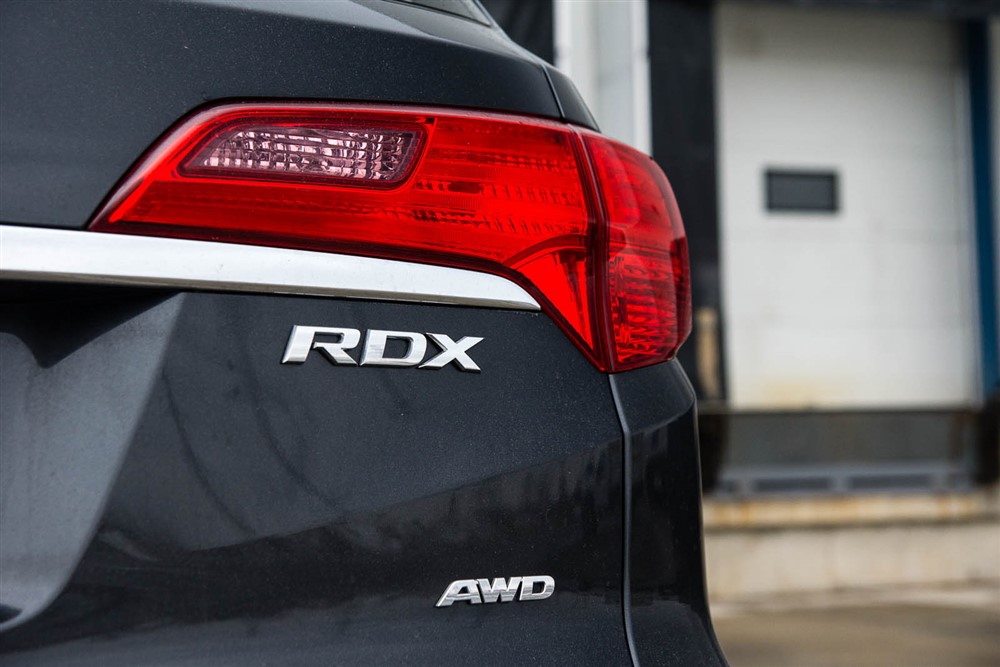 This is simple, yet really competitive overall package, when compared to heavy hitters like the Audi Q5 and the Lexus NX. The RDX offers very strong value, by way of its excellent powertrain, mainstream size, standard luxury amenities, and a design that doesn’t offend. The aforementioned Q5 puts down less power through a four-cylinder gasoline engine, but it features a better transmission and all-wheel drive system. The Q5 also can pass the $50,000 point if you’re a little too eager with the option checkmark boxes. The Lexus NX is the new kid on the block – its dynamic styling isn’t for everybody, but is another well-rounded package. Like the base Q5, the NX is down on power somewhat, and its power delivery also isn’t quite as smooth as with the RDX.

The elephant in the room, at least as of this date, is that the 2016 RDX has been announced. A mid-cycle refresh, it brings some gentle updates inside and out. The Acura trademark “Jewel Eye” LED headlight cluster seen on the new ILX and TLX makes its way to the RDX, as well as some technology and safety updates. Even with the new toys, I expect the RDX to remain the strong value that it has become known for. Check back here with DoubleClutch.ca for a review on the 2016 Acura RDX later on this summer. 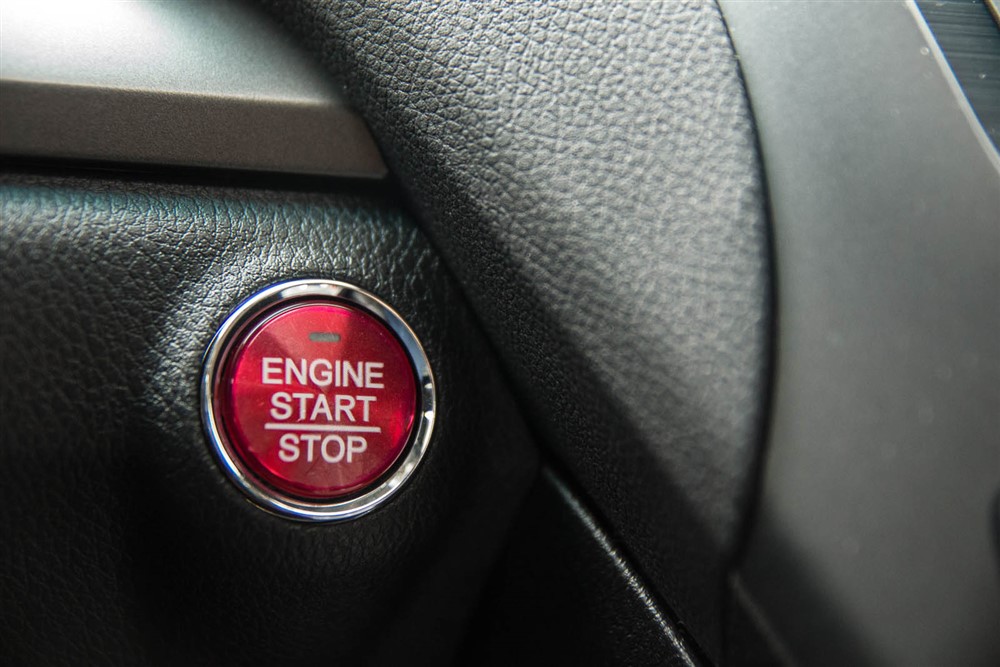 The Acura RDX is one of those vehicles that flies under the radar, quietly and competently doing a good job at what it is ultimately designed to do. It isn’t the enthusiast choice like it was in its first-generation, but the decisions Acura made will pay off in appealing to a much broader spectrum of possible customers. The segment that the RDX plays in is one of the hottest around now, so it’s important for Acura to be careful with their steps. I went into the week with fairly low expectations, if I’m honest, because of the changes made to bring the RDX closer to the mainstream. After a week with one, I came away impressed with how well-rounded the RDX is. What sets it apart is its strong value factor. Both of these items make the RDX a strong contender and should definitely be on your short-list. 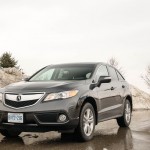 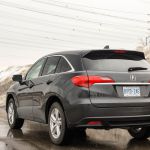 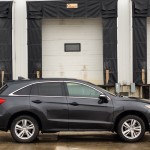 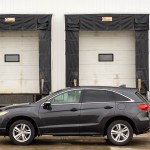 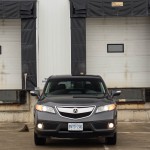 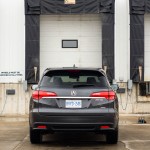 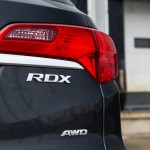 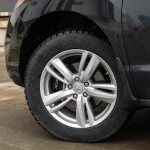 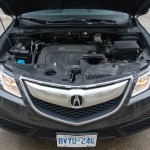 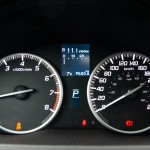 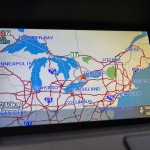 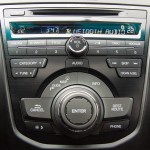 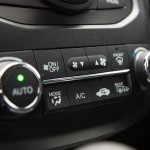 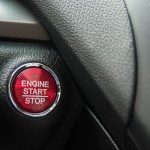 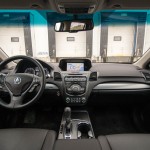 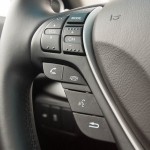 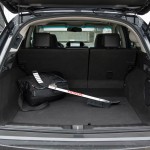