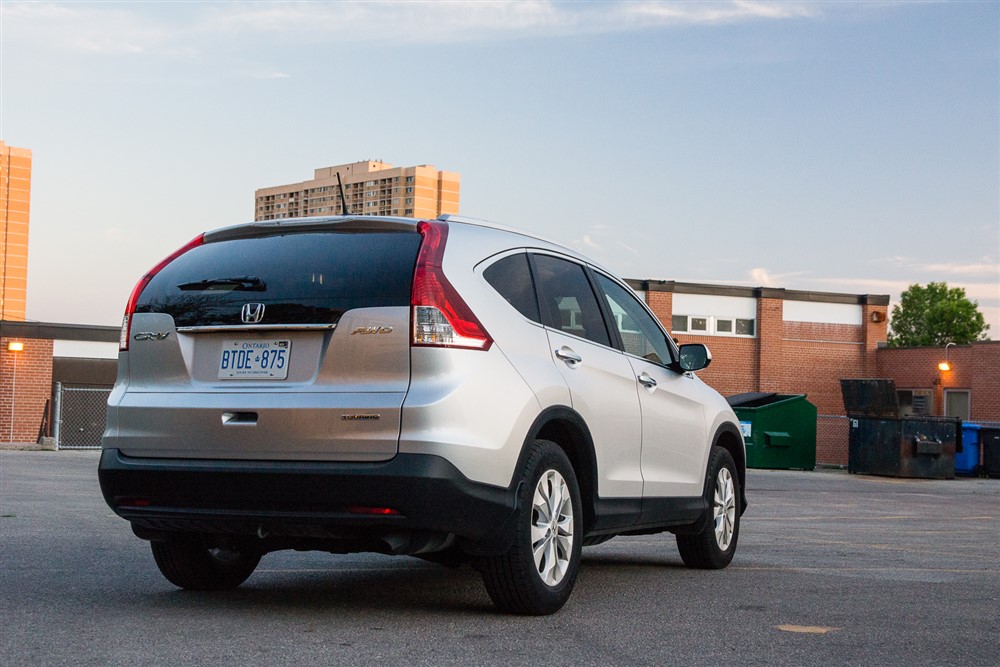 A best-seller in loaded up guise |

The CR-V has been an important staple product for Honda for almost twenty years now. They picked a great time to jump into the crossover utility vehicle market – sales in the segment would skyrocket shortly after. The first CR-V, loosely based on the Civic back in 1996, was a boxy yet functional little truck for the time with some interesting engineering built in. 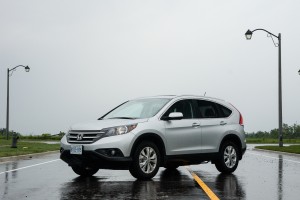 Powered by a larger, bored-out version of the Integra’s four-cylinder engine, it was combined with a fully mechanical reactive all-wheel-drive system. While you sat high up in it like a real truck, the suspension underneath was surprisingly not too far from how Honda’s race cars would be set up, with double-wishbones all around. The second and third generation CR-V was built on a similar formula, but took away some of the items that made the CR-V quirky and interesting. A different suspension configuration took away some of the race car credibility, but made for more room for cargo, yet maintained the supple ride that people have come to expect of the CR-V.

The fourth-generation CR-V continues to be an important product for Honda, considering the tough competition from just about everybody. There are a lot of new and updated entries from all over the world. Does it still have what it takes to seriously compete in one of the hottest segments around? Can their rock-solid reputation keep things moving? I picked up the keys to a 2014 Honda CR-V Touring AWD, painted in a shade of “Alabaster Silver Metallic”. 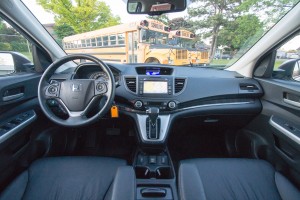 The CR-V takes on a slightly more aggressive and chiseled look that has carried on since 2011. Gone is the soft curve of the roofline in favour of something more pointed, especially towards the rear. The headlights now integrate into the front grille and the taillights follow the new lines a little better. Honda didn’t take many risks in styling the CR-V, so while it may not look terribly unique in the class, it still looks very much like a Honda. The CR-V rides on 17” wheels wrapped in 225-section tires. For those playing the spec sheet numbers game, you’ll notice all the new kids on the block offer 18” wheels. This may matter to some, but it won’t matter to others. I find the CR-V to be inoffensive in almost all aesthetic aspects. Some would go as far as to call it boring or bland, but I think inoffensive is the most accurate term.

Inside, the CR-V takes on a functional and utilitarian slant, with lots of big dials that are easily reached and operated with gloves on. Some would argue against its somewhat Spartan appointments, but I prefer the CR-V’s simple layout compared to something busier, like the Ford Escape. Up front and centre, lives a touchscreen navigation system – standard on Touring models. The screen is about six inches in size, but the resolution is a little low for today’s standards. It gets the job done, but not much more. Up top is Honda’s i-MID (intelligent Multi-Information Display) which can be configured to provide info on upcoming navigation instructions, fuel efficiency, or audio settings. Its high-mount location is useful at a glance without taking your eyes off the road. 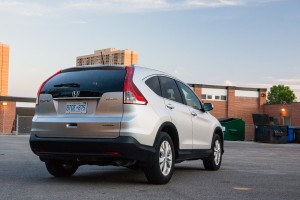 Honda has long been clever in terms of interior packaging. Space is ample for five, especially in the headroom department. What I liked the most, however, is how interesting the rear-seat mechanism works when you need to carry more cargo. Standing in the rear doorway on either side of the vehicle, all you need to do is gently tug on a nylon strap peeking out the of the bottom seat cushion, then some magic origami happens: the seat bottom lifts up and jumps into the footwell (make sure it’s clear), the headrest folds down, and then the seatback folds down horizontally. This leaves you with a very low and very flat load floor for all your stuff. I was able to responsibly dispose of a massive Sony 32” Trinitron CRT TV with space to spare (with the help of two others).

A family friend had asked me if Honda has changed the rear-seat cushions – he claimed the firm seats were not friendly for long trips, and I’m inclined to agree. Honda has always preferred firm seat bottoms for good support, but the CR-V’s rear seat bench is fairly flat, necessitating frequent stretch breaks for the kids who find themselves getting restless. 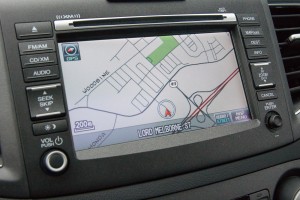 Under the hood lives Honda’s tried-and-true K24 four-cylinder powerplant, displacing 2.4L, producing 185 horsepower and 163 lb-ft of torque. It is paired up to a five-speed automatic transmission. This combination may not seem very special to somebody comparing numbers on spec sheets (again), but it’s a rock-solid reliable pairing that dates back about ten years. To some, that may suggest stagnant complacency, but I think there’s something to be said about sticking to something that works and gets the job done for its intended audience. Acceleration is adequate and in line with what’s expected for the class. However, there’s no option to upgrade to a more potent powertrain. Honda’s latest implementation of their Real Time AWD system is a reactive electronic (read: smarter) system that only sends power to the rear axle as the front wheels lose grip. The CR-V will operate in front-drive mode by default.

Honda rates the CR-V AWD Touring at 9.2L/100km in the city, 6.6L/100km on the highway, and 8.1L/100km in a combined cycle. I managed approximately 9.5L/100km in mostly city driving, over almost 400km. The fuel tank will accept 58L of regular fuel – most should be able to hit 500km on the highway at reasonable speeds. I did make use of the big green Eco button to the left of the steering wheel, but only on the highway. Throttle response in the city with Eco enabled is a little too dull for my tastes, but I did like how it ramped down air conditioning usage. 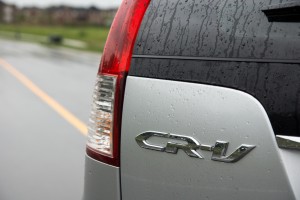 The CR-V starts at $25,990 for the base LX in front-drive configuration. The five-speed automatic transmission is standard across the board, which is nice for those wishing not to tire their left legs out in traffic. Options such as all-wheel-drive, heated seats, sunroof, leather, and navigation will push the price up to an as-tested price of $35,450.  This puts it right in the thick of the hyper-competitive CUV market. Even this top-trim CR-V is missing a few gadgets, namely HID low-beam headlamps and a power rear tailgate, which all the new kids on the block are offering nowadays in their top-level trims.

It’s easy to look at the competition and all the toys and gadgets they bring to the table, and how they make Honda’s entry look and feel a little dated. In some cases, I do feel the CR-V is in need of a major update or replacement. Elsewhere in the Honda stable, the Civic and Accord have both been either significantly refreshed, or completely overhauled to critical acclaim. I think it’s time for Honda to do the same to the CR-V to bring it back up to speed with Honda’s recent growth. As I wrote this review, I found myself referring to the notion of something being made for the “middle of the road” market. Such a product may not excel at any one thing, but it quietly does everything well. I think this applies to the Honda CR-V. Calling it a bad product would be grossly incorrect. For the family who is looking for a safe, no-nonsense choice, devoid of surprises and quirks, the CR-V is more than worth a look. 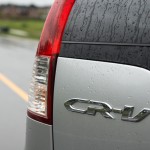 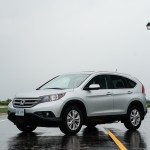 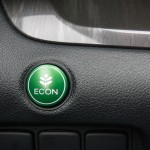 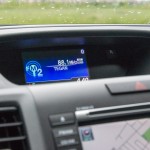 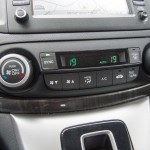 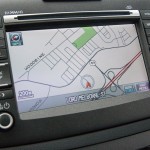 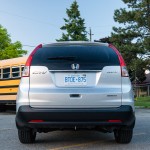 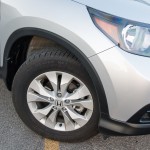 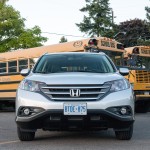 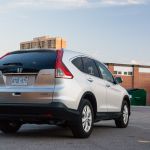 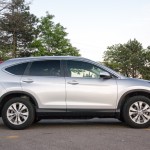 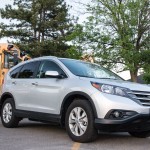 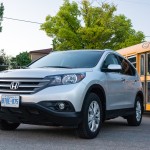 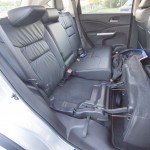 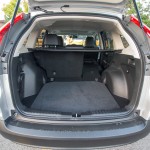 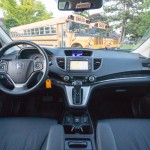