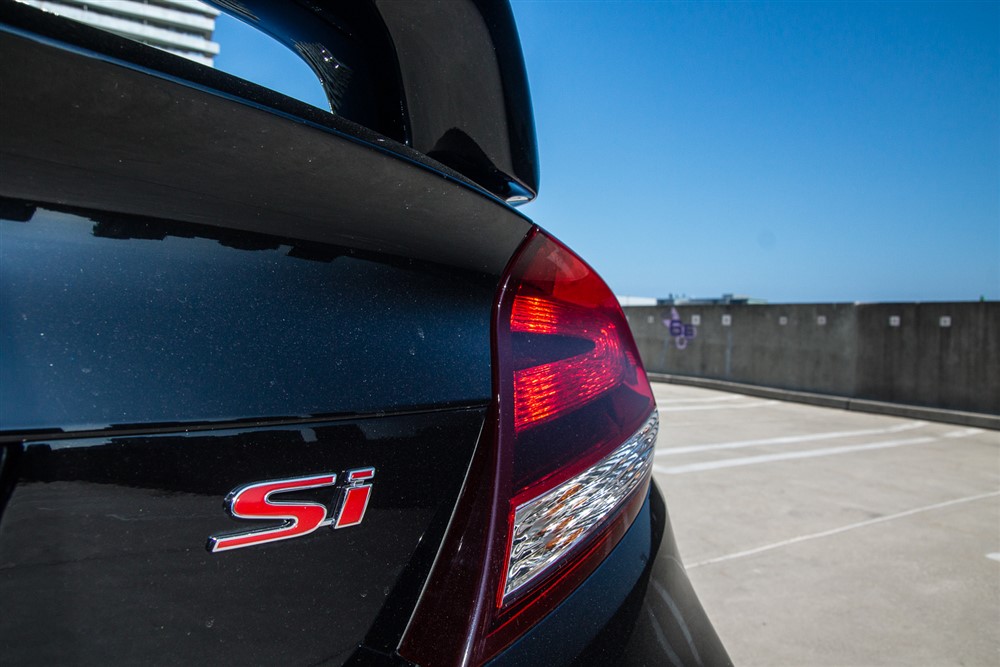 A favourite with some appearance goodies |

The “Si” nameplate has been a good indicator for performance in the Honda family. Standing for “Sport Injected” (when most engines were still carbureted), any Civic bearing these two letters stood out from the rest by offering more horsepower, tighter suspension tuning, and some racy cosmetic upgrades. Overall, a better experience for the enthusiast was the aim. The original Civic Si, first seen in the mid-80s was a pint-size hot-hatchback, putting out up to 122hp and generating a lot of smiles along the way. 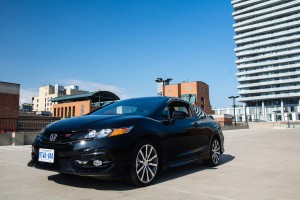 Successive generations added more power, usability, and changed up some of the configurations (dropping the hatchback in 2006) that kept it up to date with consumer trends. There is a lot of discussion on the internet around whether the 2014 Honda Civic Si will remain faithful to the nameplate. Some have argued that it has gotten too large and too soft. In some ways, the community-at-large would be correct, especially when you put the new car beside a 1992 Civic Si hatchback, for instance. I think people need to remember that this car somewhat channels the dearly-departed Acura RSX, as well as the excellent Honda Prelude of years past. Does Honda still have what it takes to build a good Si? I picked up the keys to a Crystal Black Pearl Civic Si, with some HFP (Honda Factory Performance) goodies added on.

The eighth-generation Civic from 2006 would set the tone as far as Civics go. With a high-slung wedge shape, the 2015 model builds on its predecessors by incorporating aggressive front and rear-end treatments to differentiate itself from the standard garden-variety Civic. The front-end sees aggressive details around the fog lights, and the lower rear bumper gains a faux (but snazzy) rear diffuser. Wheels and tires (now up to a 225-section tire on special HFP 18” wheels) are also upgraded from the standard Civic. Lastly, the rear wing, while not quite Subaru-levels of large, does do a good job of attracting a little attention from onlookers. The optional HFP exhaust adds a nice deep tone at speed, but doesn’t introduce any annoying drone whatsoever. Overall, the Civic Si does stand alone in the Civic lineup, but I personally find the front-end to be a little busy looking, with so many different contours and trim pieces around the fog lights and in the grille. 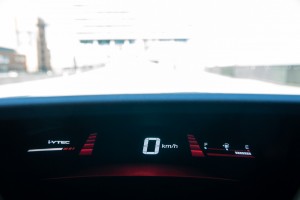 Inside, the two-tier dash configuration remains for 2015. Similar enough to the dash in the standard sedan, the Si dash is made different by a generous helping of racy red and simulated carbon fibre trim. The seats feature bright red inserts with Si badging, and the matching red floor mats brighten up what is an otherwise standard interior. Dominating the centre console is Honda’s seven-inch touchscreen Display Audio System with satellite navigation. It also incorporates full Bluetooth integration, Honda’s LaneWatch blind spot display, and reverse rear-view camera. Like the Civic Touring sedan, you can hook up and control some aspects of your iPhone via the nearby HDMI input. Also like the Civic sedan, there is no volume control knob, but only a touch-sensitive volume control strip that isn’t as intuitive. One useful tidbit: there isn’t much of a hump in the centre of the floor for your rear passengers to get hung up on.

Up at the top of the dashboard, to the right of the speedometer readout, Honda’s i-MID system can be configured to display real-time fuel efficiency statistics, but also can display a “Power Monitor” as a percentage of peak horsepower. On the left side, an i-VTEC light will activate as you get into the higher end of the rev range. 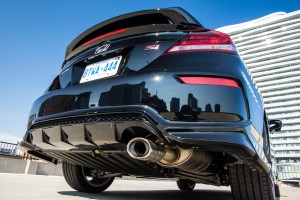 Added horsepower has been a long-time Si characteristic, and the 2014 Civic Si builds on that – just barely. Now up to 205 horsepower (up four) at 7000rpm and 174 lb-ft of torque at 4400rpm, the 2.4L twin-cam 16-valve engine (shared with the outgoing TSX) is a real sweetheart in this car. The torque is great for getting around the city without the need for too many downshifts. The internet has been quick to point out their preference for the old K20 2.0L engine in the 8th-generation Civic Si (up until 2011) for its freer-revving nature and higher redline (at 8000rpm), but the added torque from the larger engine is more welcome on a day-to-day basis.

Paired up with Honda’s excellent K24 engine is Honda’s equally excellent six-speed manual transmission. The shifter action is quick, accurate, feels great in your hand, and is just a joy to use. Pedal placement also makes it easy for rev-matching downshifts. The interface that Honda gives your hands and feet is just about the best in the business. The Civic Si also features a helical limited slip differential, useful for getting power down to the ground, no matter the road conditions. I certainly felt it at work when I pinned the throttle coming out of a sharp left turn. The differential tugs a little bit at the wheel and helps prevent unnecessary wheel spin. It’s nice to have – the up-level Acura ILX doesn’t get this go-fast hardware even though it shares a similar powertrain. 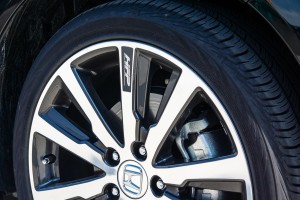 Honda rates the Civic Si at 9.9L/100km in the city, 6.6L/100km on the highway, and 8.4L/100km in a combined cycle. I managed to hit 8.5L/100km in mixed driving – right on target with Honda’s estimates. The city rating sounds a little high, but I suspect it has something to do with the first five gears. They are fairly short, and you do have to row through the gears a lot before you get up to speed. Sixth gear is a little taller – 100km/h pins the tachometer at just under 3000rpm. The fuel tank will accept 50L of recommended Premium fuel.

In terms of pricing, the Si only comes one way – fully loaded. While it doesn’t get leather seating, the sport cloth seats are heated. The aforementioned satellite navigation is included on top of the generous options available for connectivity. At an MSRP of $26,710, the Civic Si is a pretty strong value. This puts it right up against the super-popular Scion FR-S. Clearly not an apples-to-apples comparison, but the Civic Si defines “fun” in its own way, and in Honda’s signature style. The driving interfaces of both cars are a high priority, just delivered in a different way. The Ford Fiesta ST is also well worth considering at about the same price – it’s one of the most fun front-drive packages around right now. 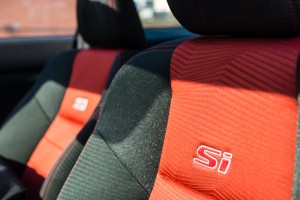 The Civic Si, like many cars nowadays, is up against some seriously good (and varied) competition. It’s not really a hot hatchback (the Fiesta ST takes that crown, easily), but it’s also not the finely-tuned lightweight rear-drive sports coupe that the Scion FR-S/Subaru BRZ twins are. Detractors would dismiss the Civic Si as being somewhat stuck in the middle. This goes back to the notion of the new Civic Si filling in the shoes of the departed Prelude and Acura RSX. I don’t think Honda minds too much – people will gravitate to the Civic Si because it provides not only a great driving experience every day, but it also provides a uniquely-Honda driving experience, every day. 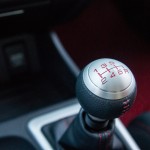 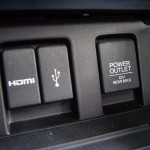 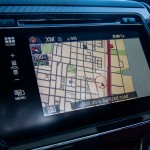 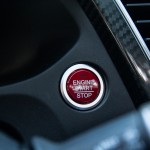 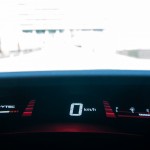 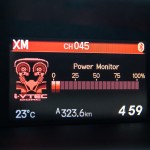 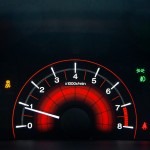 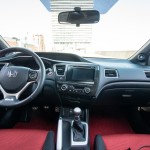 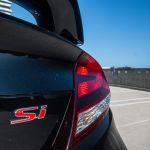 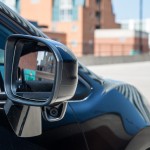 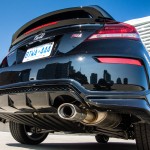 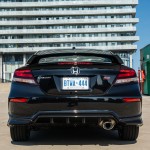 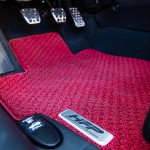 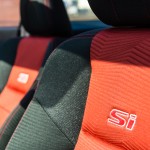 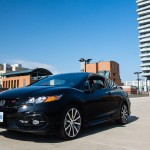 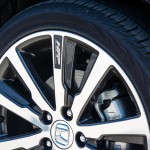 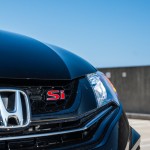 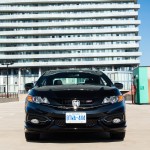