Tesla Unveils AWD Model S with 691 HP. Get it just in time for Christmas!

As expected, Elon Musk has yet another trick up his sleeve. Tesla has introduced an all-wheel-drive variant of its all-electric Model S sedan. 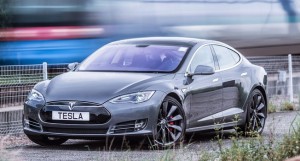 The new top performance trim, will be dubbed the P85D, and will use separate electric motors to drive the front and rear axles.

With 221 hp sent to the front and 470 hp in the rear for a combined number of 691 horsepower on tap, will allow the new P85D to get from 0-60 mph in about 3.2 seconds, and with a new higher top speed of 155 mph. This new acceleration stat is better than a Ferrari 458 Italia, and just one fraction of a second longer than the Challenger Hellcat, and the Corvette Z06.

Along with the performance and handling improvements, buyers will also be happy to hear that the new P85D gains an additional 10 miles in range, bringing the total range available on a single charge to 275 miles (442km).

Buyers will be able to pick up the P85D just in time for Christmas, while those wanting the lower tier 60D and 85D will have to wait until February.