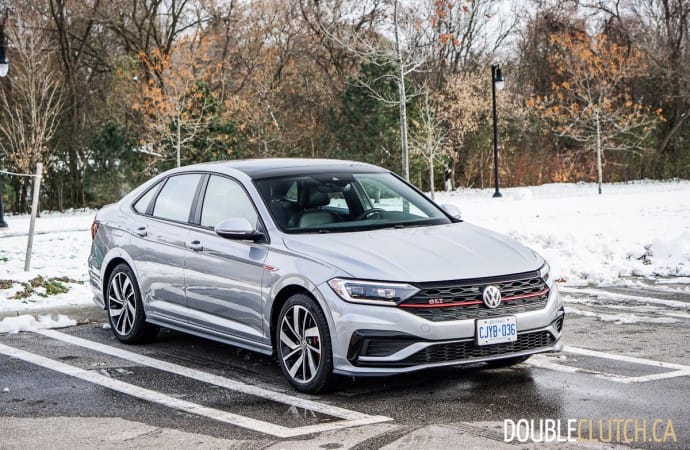 Driving dynamics with the sport tuned and adaptive suspension are fantastic.

As the North American automakers step away from the sedan market, others need to step up their game to grab their share of the market left in a lurch. All new for 2019, Volkswagen has finally updated their compact Jetta to ride on the MQB platform that underpins most of their other vehicles on the market today. To make things even better, the 2020 Volkswagen Jetta GLI is now here, catering specifically to those who favour the Golf GTI’s sharp driving dynamics and more power in the Jetta sedan’s fresh new body style. 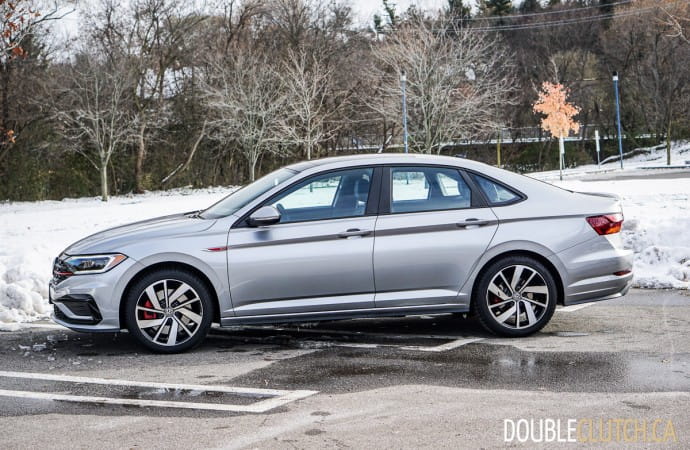 On the surface, the GLI does not stand out too much compared to the regular Jetta (reviewed here), but there are plenty of reasons why the GLI is considered a completely separate model. Unique GLI badging and revised front and rear ends give a subtle hint to the 55% increase in horsepower under the hood. Also invisible to the casual observer is a multi-link independent rear suspension, sway bars and sport-tuned suspension. In the drivetrain, a mechanical limited-slip differential shows up to work to help keep that added power under control no matter what the situation may be.

The interior of the Jetta GLI is very much in line with the rest of the Volkswagen family, with a very functional and well laid out dashboard is front and centre, housing the straightforward infotainment system in an eight-inch touchscreen. Flanking the screen are shortcut buttons to major functions, including one that most other cars have not gotten around to adding yet, the ‘APP’ button. This one is a direct jump to Android Auto, Apple CarPlay or MirrorLink, depending on which phone you have plugged in. 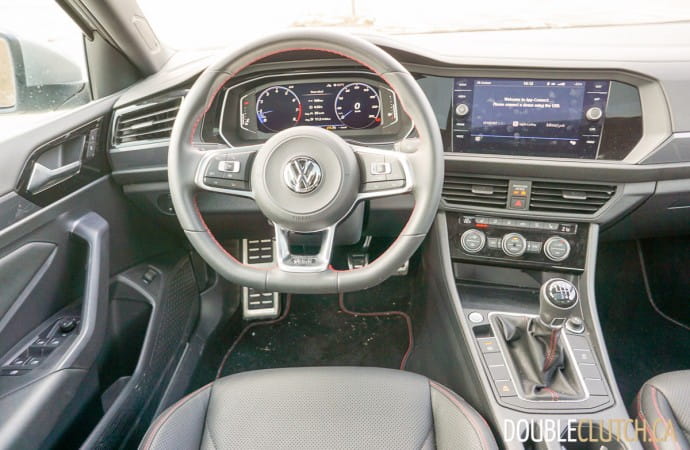 HVAC controls with automatic climate control, seat heating and cooling buttons are all simply laid out and easy to use, with all driving-related buttons surrounding the shifter, where they should be. One major item we noticed missing, which is inexcusable for our cold Canadian climate, is a heated steering wheel. During our week of testing it was a few degrees below freezing outside, and the steering wheel was noticeably cold at all times, despite our seats and mirrors being perfectly toasty.

GLI models come with a few nice decorative accents, such as red striping throughout the seats, 18-inch wheels, flat bottom steering wheel and carpets. The door sills get illuminated GLI logos, as well. Unlike the regular Jetta which can be ordered with a massive sunroof that extends over the rear seats, the GLI comes with a more typical sized sunroof, but at least it comes as standard equipment. 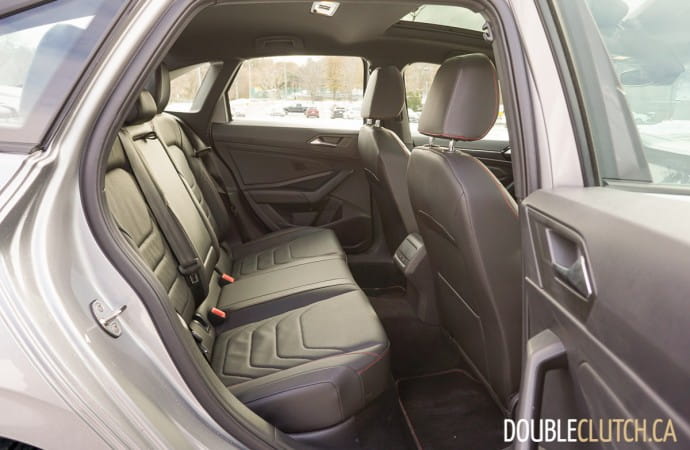 In fact, almost everything is standard; there is only one option package that can be purchased on the GLI, an Advanced Driver Assistance Systems package for $995. With an MSRP of $31,695 for manual transmission models, and that lone package added on, our test vehicle’s as-tested price came to $32,690 before fees and taxes. At that price, you get quite a lot of car, and it is well in line with similarly exciting stick-shift cars such as the Honda Civic Si sedan (reviewed here) and the Subaru WRX (reviewed here).

As with every new generation of a car, the Jetta GLI is larger inside than the previous model, this is especially important for the Jetta to differentiate itself from the slightly tighter Golf, which already existed on the MQB platform for a few years now. Rear seat legroom in is decent for adults, and we had no problem getting a big Britax Advocate car seat installed. Rear passengers are also graced with the presence of heated seats for winter commutes. The trunk can hold 399-liters of cargo, which is perfectly acceptable for a sedan. The opening is nice and large, and the 60/40 folding rear seats make bringing home large items pretty easy. 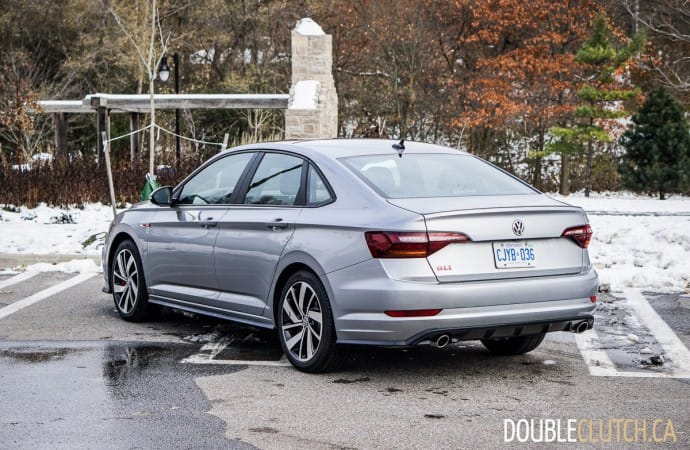 Providing the life force behind the GLI name is a smooth and punchy 2.0-liter turbocharged four-cylinder engine producing 228 horsepower at 4,500RPM and 258 lb-ft. of torque at 1,500RPM. This means the Jetta GLI can spin those wheels with lots of force right off the line, and certainly makes the limited-slip differential helpful to get going in a hurry.

Our test vehicle was equipped with a six-speed manual, while a dual-clutch automatic is an extra cost option. With the fast disappearance of manual transmissions, some of the examples left standing are awful parts-bin pieces that don’t match up nicely to the engine. This is certainly not the case in the Jetta GLI; the gearing is perfect, keeping in lock-step with the powerful engine. The shifter feels great, and the clutch pedal is light, but heavier and providing more feedback than the one found in the Honda Civic Si. 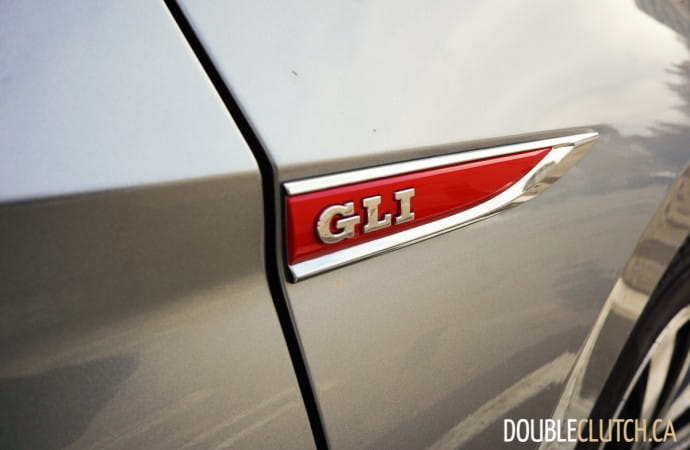 Shifting your own gears comes with a lot of reward, but also these days with more fuel consumption. In the Jetta GLI that difference is marginal, with the six-speed models rated at 9.6L/100km in the city, 7.3L/100km on the highway, and 8.5L/100km combined. The combined number is only 0.1L/100km higher than the automatic. All of this good fun is fed by a 50L tank asking only for regular 87 octane fuel, with no requirement for premium.

Proudly announcing itself to the market for sale, the 2020 Volkswagen Jetta GLI is enjoyably roomy, and if it weren’t for the lack of a heated steering wheel we might be inclined to call it the perfect commuter car. Driving dynamics with the sport tuned and adaptive suspension are fantastic, and the six-speed transmission is wonderful to play with. The sedan market may be shrinking, but those that remain are sticking around for good reason. 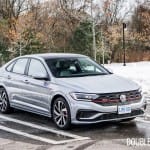 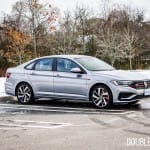 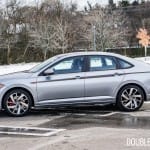 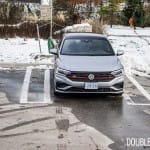 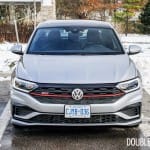 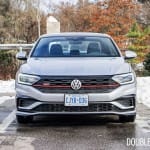 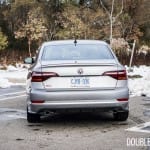 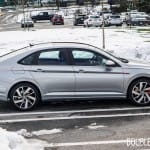 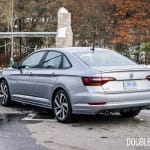 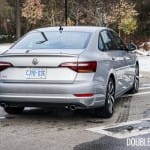 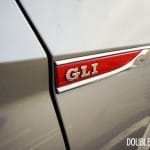 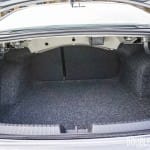 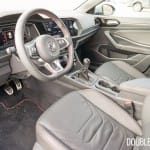 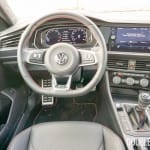 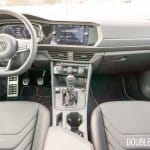 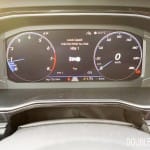 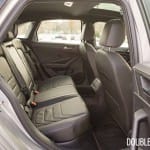 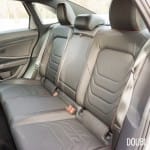 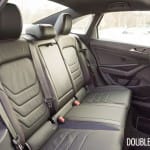 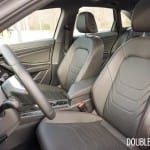 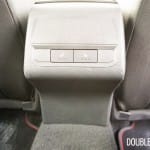 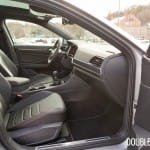