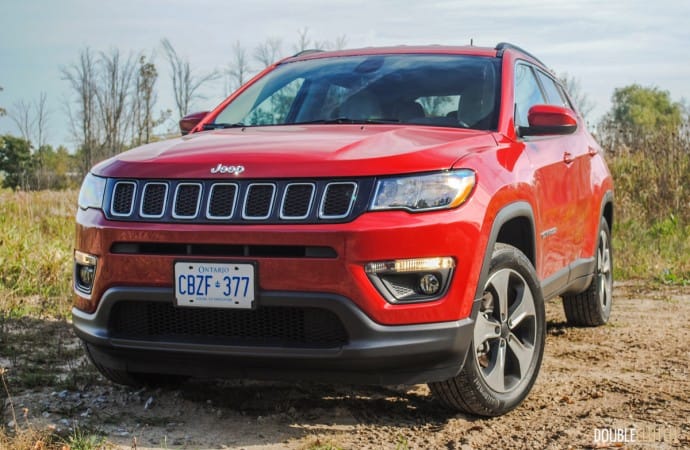 The Compass is actually quite pleasant to drive on a daily basis.

The compact SUV market is on fire, and where there’s big opportunity there is big competition, so the team at Jeep decided to give their compact entry a big update. The 2018 Jeep Compass North is in fact hardly recognizable from its former self, and that’s great news; but is the update enough to pull the Compass to the top of a very competitive list? We spent a week putting it through its paces to see how it stacks up.

At first glance the new Compass delivers some very good news. It does look a lot like a baby Grand Cherokee (reviewed here), especially from the front, and that’s a great thing. In fact, from the front there is no mistaking the Compass as anything other than a true Jeep, and it’s nice to see the corporate styling handily applied to a compact package. Moving along to the side of the Jeep, the lines don’t flow quite as well as they do on the Grand Cherokee; most notably an awkward C-pillar with an even more awkward chrome strip cutting through it. 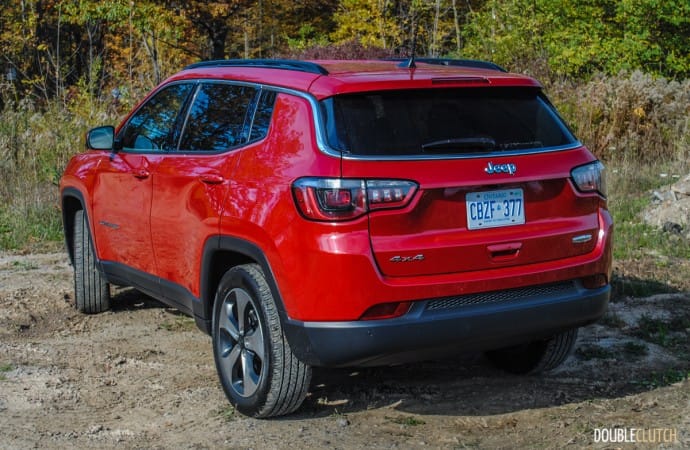 Otherwise, the Compass is one of the better looking compact crossovers on the market and its black plastic cladding gives it a bit more of a rugged off-road look than its competitors. The test vehicle came equipped with a set of optional 18” wheels, finished in a silver and matte black two-tone. They look like someone tried to spruce up old wheels using black paint and it just doesn’t work – happily there are other wheel options.

The interior layout also works to emulate the Compass’ larger siblings, and the best part of that is that the dashboard layout is great with controls in easy reach and intuitive to use. The gauge cluster is also well laid out with a nicely lit LCD screen. The Compass gets the latest version of Fiat-Chrysler’s praised UConnect system with Android Auto and Apple CarPlay capabilities. It’s an easy-to-use touchscreen based system that responds well and doesn’t take much learning to get used to. I still gripe that the heated seats and steering wheel are only controllable through the touchscreen, which is cumbersome but not a huge deterrent. 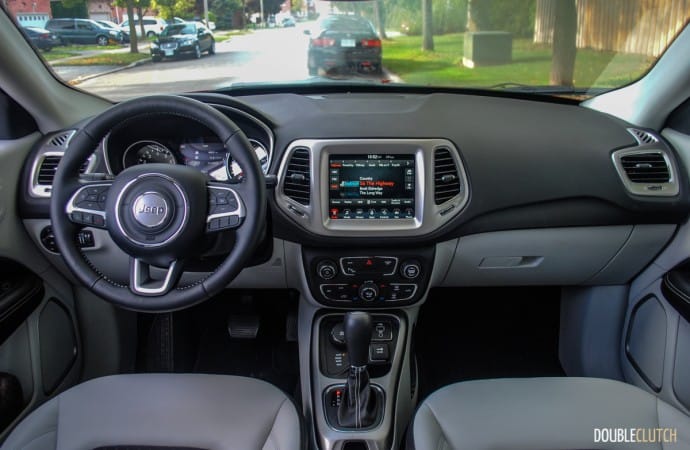 The materials used inside the Compass are obviously selected to hit the vehicle’s price point and while most are low-sheen plastics, the fit and feeling of most items inside the Compass leave plenty to be desired, but remember – we are talking about a fairly entry level crossover here. The interior can be optioned in all black, which would be the right choice.

From a functionality standpoint, the interior offers plenty of rear seating space, even for adults, and the cargo area behind the rear seats is surprisingly large for a compact. Of course, the split rear seats do fold flat if you need more space, but even with the seats in place the trunk will handle a standard stroller or a load of groceries with ease. Up front, the story isn’t so good as there is an obvious lack of storage for daily items, limited to a smaller door pocket, tiny centre console and two cupholders. 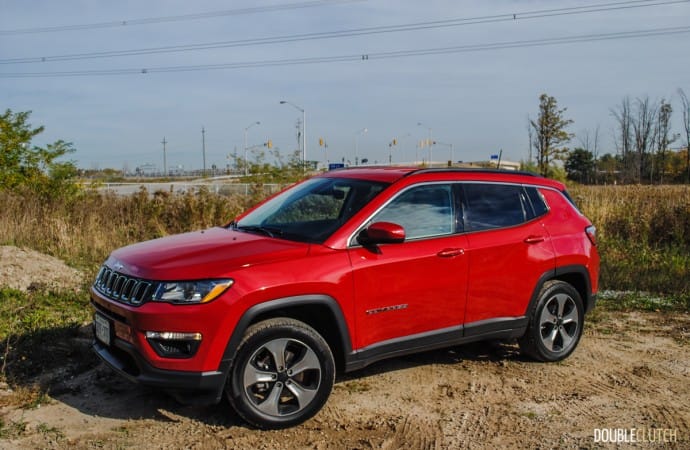 What the Compass does have going for it is that it is, without much dispute, the most capable off-road compact crossover you can buy today, especially if you option it with the Trailhawk (reviewed here) off-road package. Even without the extra off-road kit though, our North trim level tester came with the Selec-Terrain traction management, which lets you select the terrain that you’re driving on (auto, snow, sand, mud) and optimizes the system’s behavior to suit the situation. The Compass also boasts a 2000 lb. towing capacity. This will handle a small boat or a family tent trailer with ease, while many of the Compass’ competitors are not rated to tow at all.

The only available engine in the Compass is the 2.4L Tigershark® MultiAir® four-cylinder. Tying in with the Jeep’s capability, it is one of the bigger engines available in the segment, and outputs a relatively healthy 180 horsepower and 175 lb-ft. of torque. The base transmission is a six-speed manual, which isn’t likely to be a popular choice, and a 4×2 model can be optioned with a six-speed automatic. Opting for the 4×4 model means that the automatic option becomes the nine-speed automatic as equipped on our tester. The nine-speed has had a rocky start to life, but it has been significantly in this application and feel right at home, with clean crisps shifts and always seems to have the Jeep in the right gear. 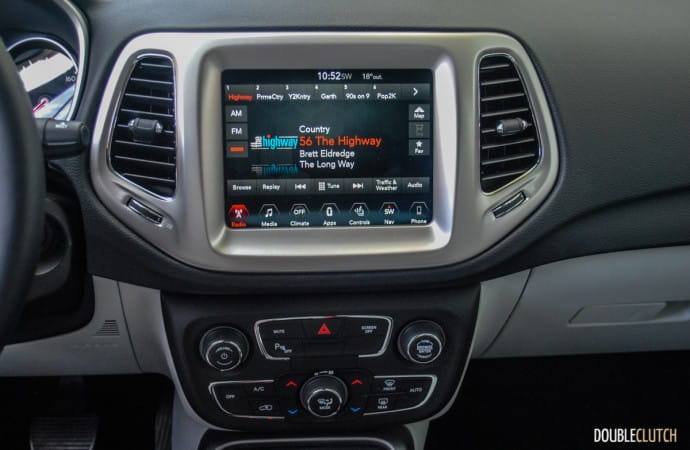 I wish the same could be said for the 2.4L Tigershark, which I have not been a fan of since its inception and have yet to see any meaningful improvements. Yes, it is peppier around town than the smaller-displacement turbocharged competitors, and it should be smoother too; except it’s not. The 2.4L feels gruff, noisy and it runs out of steam fairly quickly on the highway.

Real world efficiency always seems to lag in comparison to the majority of the Compass’ rivals, with our average for the week sitting at a slightly disappointing 10.8L/100km. The Compass does have a start/stop system to help with fuel economy in the city, but it’s exactly refined, with big delays starting up from a stop and every restart cutting power to accessories. 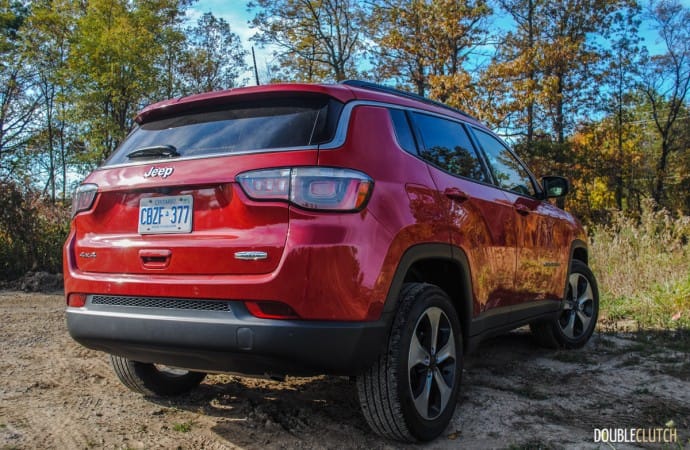 Despite the engine’s best efforts though, the Compass is actually quite pleasant to drive on a daily basis. It’s easy to get in and out of, the seating position is comfortable, it’s quiet inside and the ride is fairly well mannered, save for some excess bounce on the roughest of city streets thanks to the relatively short wheelbase. There is an intrusive drone from the exhaust while coasting at a certain speed, right around 50km/h, but it’s difficult to say whether that’s an affliction of this particular test vehicle or all Compass models.

If you think the Compass’s extra capability and ruggedness might make it the right compact SUV for you, you’ll be happy to know that you can get into one for an affordable $24,990, and adding the popular 4×4 system adds less than $2,000 to the price tag. The top-trim Limited starts at a respectable $34,895, but gets awfully close to the $40,000 mark if you start adding luxuries like a panoramic roof or navigation package. Our tester is in the mid-range North trim, which starts at $28,395 and will likely hold the bulk of the sales volume, but has a long list of option packages added that push the as-tested price to $35,600. 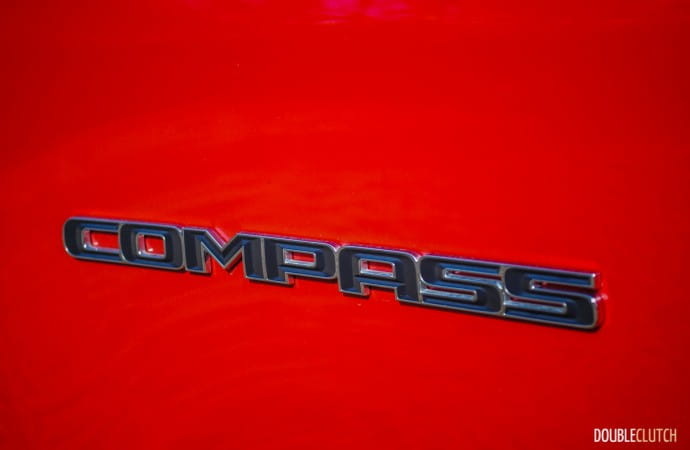 Those hoping that the 2018 Jeep Compass North is a smaller Grand Cherokee based on its looks, but that’s not necessarily the case. What it is though, is more in line with the true Jeep formula; it’s more capable and rugged than rivals and it looks great. What the Compass gains in off-road prowess it lacks in overall refinement, and that’s part of the Jeep charm. The Compass is a great way to get a big dose of Jeep in a smaller, more affordable and practical package. 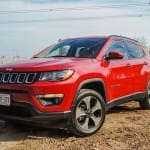 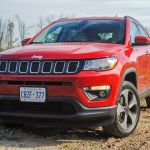 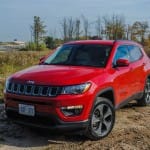 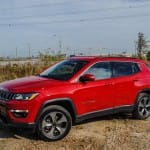 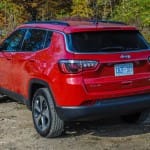 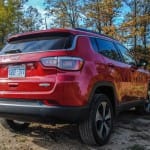 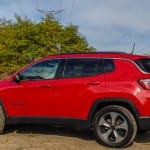 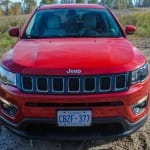 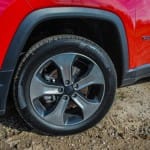 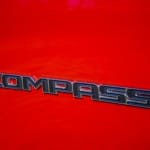 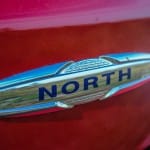 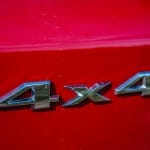 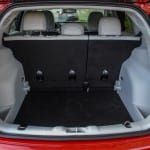 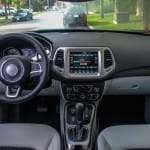 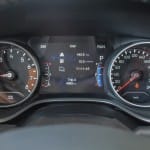 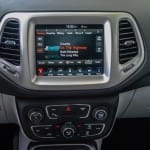 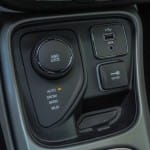 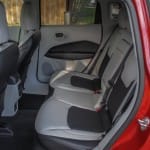