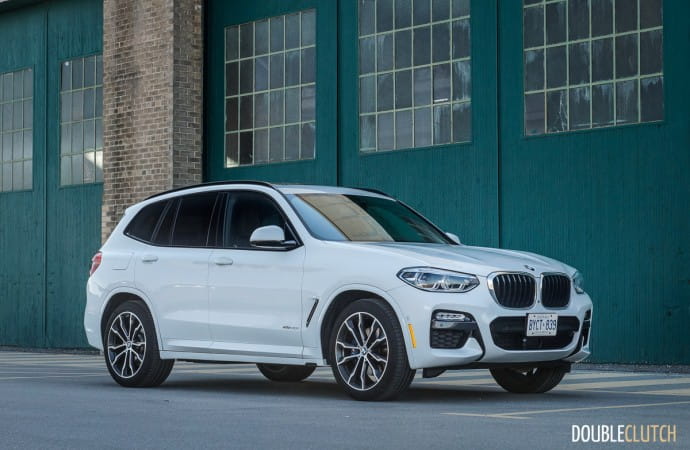 For technology and connectivity, the X3 xDrive30i reigns as one of the industry’s best.

In the luxury compact crossover segment, new players are continually arriving on the scene – some as refreshes on older designs, and some new from the ground up. The 2018 BMW X3 xDrive30i is an all-new third generation of a model that’s been around since 2003, with the last major redesign happening in 2011. The new car brings the X3 up to the current BMW design language, which is relatively conservative and doesn’t stray far from what we’re all used to, but still keeps things fresh enough to deserve at least a second look. We recently got to spend a week with an Alpine White test vehicle, and right off the bat, first impressions were good. 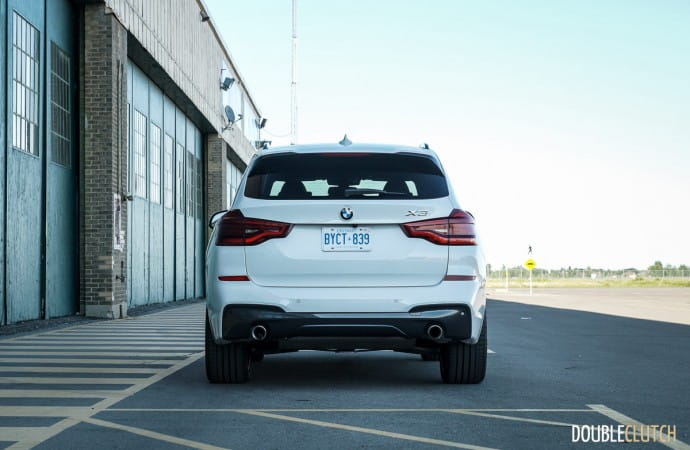 Inside, the 2018 X3 seats five and is a useful yet luxurious cargo carrier, with plenty of space whether the second row is folded down (1,600 litres, or 56.5 cubic feet) or left up (500 litres, or 17.7 cubic feet). This doesn’t quite stack up with the likes of a more pedestrian Honda CR-V or Toyota RAV4, but small families with one or two children should get by reasonably alright. There are adjustable rails in the rear cargo area for securing loose items, which is a nice touch. 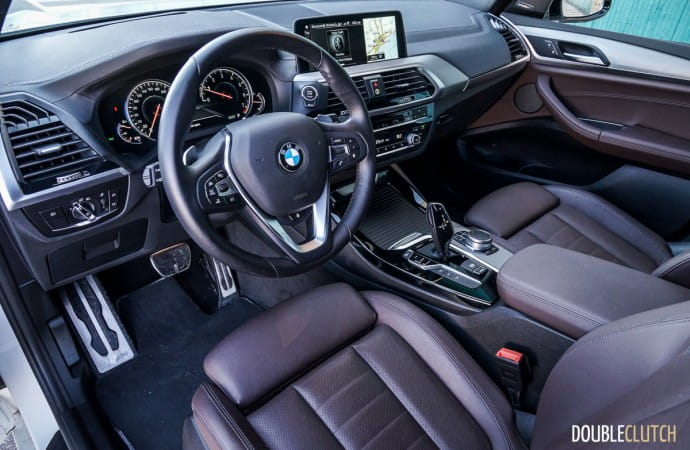 The Mocha Vernasca leather – available as part of the Ultimate Package – is probably one of the smarter shades available, and cleans up the appearance of a well-designed, but slightly monotonous dashboard. As always, fit and finish is top notch BMW and all the buttons, knobs, and touch points feel very posh. Seat comfort with the power adjustable front buckets is great, and the adjustable thigh supports give drivers a little more support for long trips; those riding shotgun will have to manspread to clear the adjustment handle, however.

For technology and connectivity, the X3 xDrive30i reigns as one of the industry’s best with BMW’s latest iDrive 6.0. For those with Apple smartphones, Apple CarPlay is included as an option in the Ultimate Package, despite many cars costing half as much getting the feature as standard equipment. Android users are out of luck. With a much-welcome control knob that can be clicked down as well as side to side, adjusting common settings is easy as pie and minimizes distraction, although lesser used menus tend to be more deeply buried. Inputting navigation keystrokes by handwriting on the top of the knob with your finger is quite useful, if voice command is not your thing. 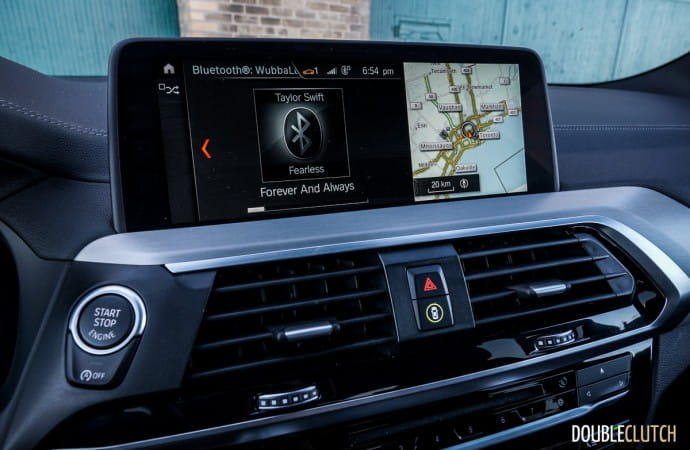 Gesture Control is a neat, albeit slightly unnecessary feature that lets front seat occupants adjust volume levels, skip music tracks, and rotate the 360-degree view for parking without touching any buttons or screens. For some reason, however, while the 360-degree camera can give a third person view of the car while parking, the vehicle is displayed as a 5 Series sedan instead of the X3. It’s an interesting out of body experience, even if it’s an anatomically incorrect one.

Dynamically speaking, handling is bolstered by the M Sport Plus packaging. Ride quality does get quite firm as a result, and those driving on pothole-ridden roads may want to opt for the softer setup. Contrary to what logic may suggest, steering response is sharpest in plain-Jane Comfort mode, as the Sportier modes tend to leave the steering frustratingly light and loose on-centre. It does firm up with more steering lock applied, but the see-saw motion of the steering wheel is unnerving when holding straight. Thankfully, the brake pedal inspires confidence and the large M-branded brakes do their best to stop the X3 in short order. When the going gets slippery, the xDrive all-wheel drive reacts well to poor weather conditions. 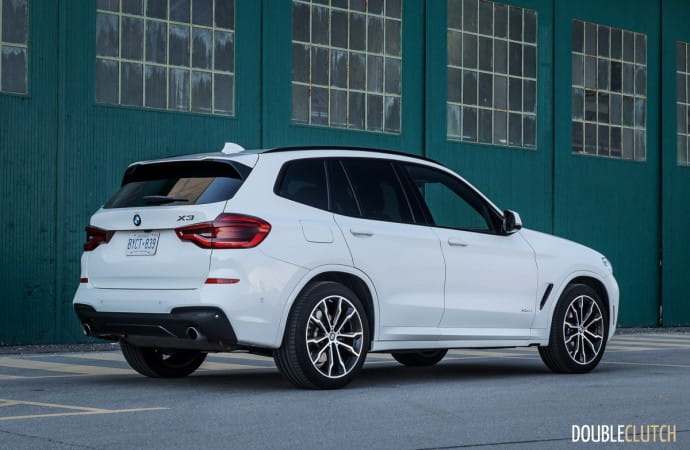 Powering the xDrive30i versions of the BMW X3 is the four cylinder 2.0-litre turbocharged “B46” engine, which employs a single turbocharger with twin-scroll technology (BMW’s TwinPower nomenclature is not to be confused with the number of turbos). Pumping out 248 horsepower between 5,200 and 6,500RPM and 258 lb-ft of torque between 1,450 and 4,800RPM, it’s a sprightly powerplant that doesn’t let on about the fact that it’s turbocharged. Lag is imperceptible, and throttle response is instant. The torque curve is especially healthy in the low-to-mid rev range, and BMW says that the zero to 100KM/H spring happens in 6.3 seconds.

Aiding in both performance and economy is the eight-speed automatic transmission, which is the only gearbox offered regardless of engine and equipment choice. It’s a slick shifting unit that is matched very well to the available torque of the B46 turbo four, and paddle shifters let drivers take matters into their own hands when desired. City consumption is rated at 10.8L/100KM, and highway driving is quoted at 8.0L/100KM. Observed economy after a week on test was 10.3L/100KM in mixed driving. 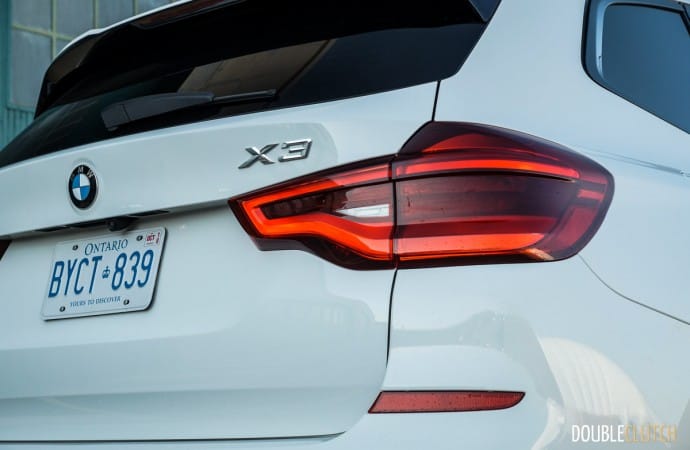 Fuel tank capacity is 65 litres, and midgrade fuel (89 AKI octane) is the minimum required, with premium fuel (91 AKI octane or better) as recommended. The X3 is employed start-stop technology that shuts the engine off when stopped at a red light, but the execution is much more intrusive than many other cars out there. Rather than waiting a second after the vehicle comes to a full stop, the X3 shuts the engine off just before stopping, which results in a big lurch and embarrassment to the driver. It’s best to leave this system shut off, although city fuel economy may suffer.

As a daily driven luxury family crossover that carries a smaller footprint, the 2018 BMW X3 xDrive30i is coming into a very competitive segment. The Mercedes-Benz GLC 300, Volvo XC60, Audi Q5, and Lexus NX are all formidable contenders who drive a hard bargain when it comes to being the best in the class. As it stands right now, the X3 can easily be regarded as being on the upper end of the scale, with good looks and great design execution that’s relatively true to the BMW philosophy. In order to get the best bang for your buck, keep an eye on whether the firmer sport suspension works for you, and skip some of the higher end M Sport options if you don’t. 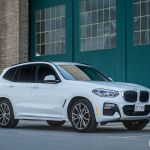 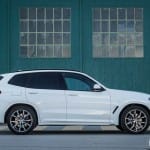 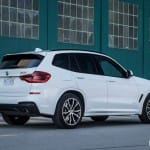 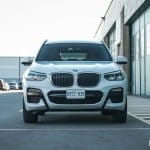 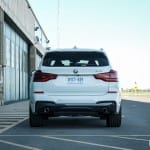 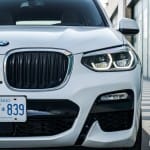 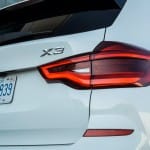 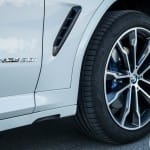 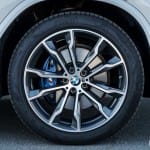 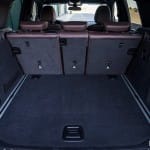 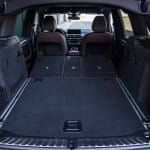 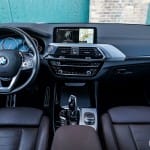 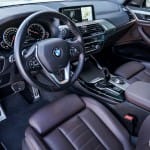 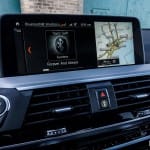 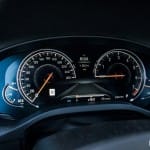 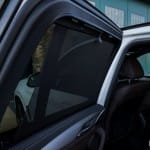 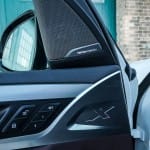 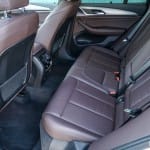 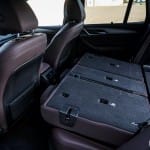 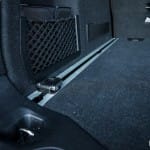 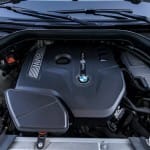