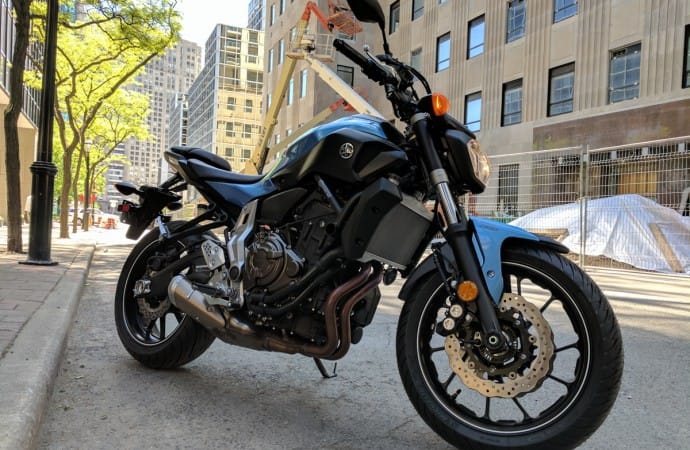 Sitting in traffic on a motorcycle during the mid-summer heat has to be the worst part of riding. Being in a car is bad enough, but on a motorcycle you get all these added bonuses like the impending doom of getting rear ended by that guy behind you that can’t look up from his tinder game long enough to realize that traffic has stopped again, or the radiating heat that comes at you from literally every direction – the sun, the asphalt, the bike, the 4+ cars all idling their hot engines in your immediate vicinity. With these conditions making up the majority of my daily commute through the construction haven that is the city of Toronto in the summer, it’s a wonder that I still have any love for riding motorcycles. 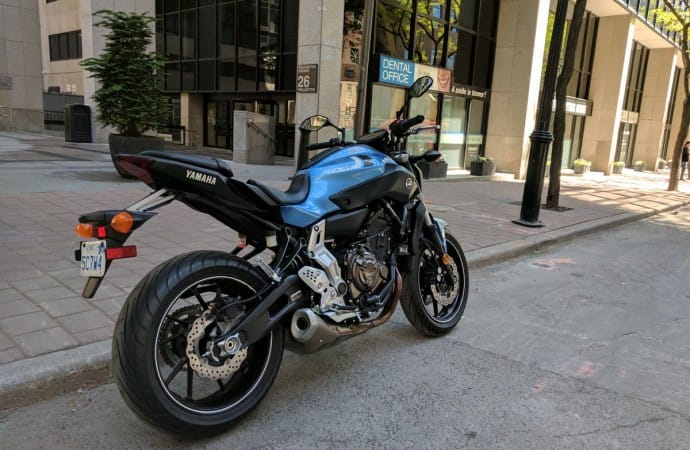 But then I ride bikes like the 2017 Yamaha FZ-07 and everything just seems ok. The liquid-cooled (phew!) parallel twin, 689cc four-valve engine is as smooth as an inline four. Engine vibrations are almost non-existent at a standstill, and when you roll on the throttle the power delivery is anything but jerky – it’s smooth and linear all the way though. That’s the “CrossPlane Concept” crankshaft at work – which if you don’t know, essentially offsets the crank rotation to give it more combustion torque and less inertia torque – ensuring more predictable power delivery. Shifting is smooth and easy, but I still wish it had a slipper clutch. If not for my sore left hand, then for all the new riders that might be considering this for their first bike. Ultimately, that’s the trade-off that Yamaha had to make to keep the price competitive, and I can’t fault them for that.

New for 2017 is the option to add ABS for $500 – a no brainer if you spend enough time in stop-and-go traffic – but all other ride-assist features are saved for its bigger, FZ-09 sibling (reviewed here). It does boost this really entertaining, yet completely useless little “ECO” light that comes on anytime you decide you want to coast in a higher gear with no power on reserve. I spent some time chasing the light so that I could satiate my self-gloating environmentalist ways, only to realize that it was like a rainbow on the horizon: the glimpse of a mirage that would never actually lead you to a pot of gold. The all-digital display does tell you your immediate and average fuel consumption though, so all hope is not lost. It also includes a gear indicator to help off-set the lack of a slipper clutch. 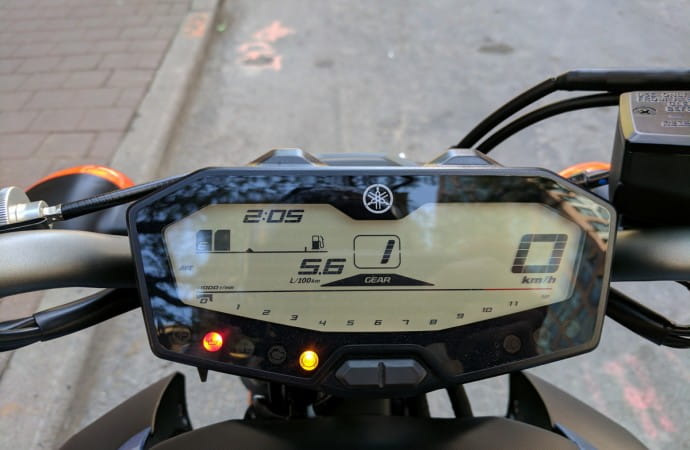 If I had to call out my favourite part of the bike, it would have to be its power to weight ratio. Weighing in at 403lbs wet, the bike feels incredibly flickable. I had no problems getting around stopped cabs, slow cyclists, and sudden potholes without ever putting much effort into it. And if you live in a city that is graced with favourable lane-splitting laws, this bike will get you in and out of that space between cars and leave you confident enough to squeeze into a tighter space the next time. The low seat height also helps with this, making it easy to put your foot down in a hurry if you need it. At 5’9, I could easily flatfoot the bike with enough room to keep a healthy bend in my knees. It helps that the seat narrows quite a bit towards the tank, and I especially like that there’s lots of room to move up or down on it to find the ideal comfort and weight balance depending on the type of riding you’re doing.

On the weekend I took the bike out of the city for some more thrilling roads and I was surprised at how much power the bike actually has. The linear power delivery can make it feel underpowered at times, but that’s just an illusion: the power is definitely there. I felt confident throwing my weight into a good lean as the road bent and smoothly cracking the throttle at the apex, but looking down at the speedometer as the road straightened, there were a few times that I was shocked at how fast I was actually going. While it was all in good fun, you can easily get yourself in trouble when you’re so used to being generous with the throttle all the time. 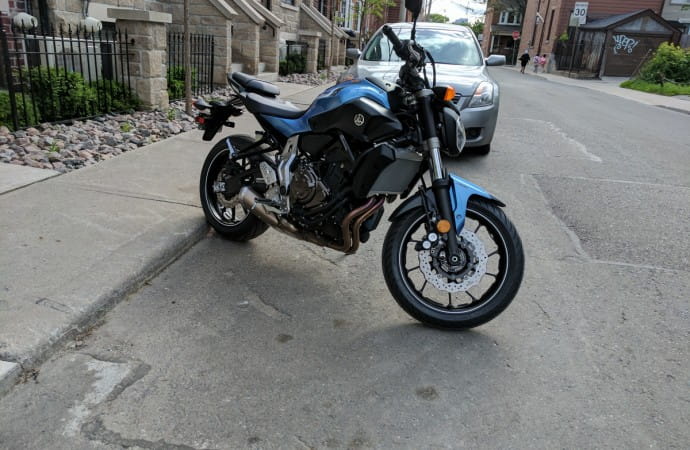 Through all of this, the least flattering part of the bike was definitely the sound. Not that I’m the type to actively piss-off my neighbors, but it was just plain boring throughout the entire rev range. Something like a sewing machine with a really good silencer. Aesthetically though, the bike is really nice. I like the way the bike cuts straight down after the display into the nearly flush headlight, I love the glacier blue and the fact that it looks distinct from the typical Yamaha blue, and I really like the shape of the front fender with its bi-colour pattern. The front turn signals should probably get swapped out for something a little less bulky though.

I like the idea of having a bike that’s easy to ride – one that doesn’t feel like a workout when all I really want to do is get home safely after a long day at work – but I wouldn’t ever sacrifice the fun that comes with riding just to have this. The more I ride and think about the FZ07, the more I realize how well balanced it is: the bike will feel at home with a new rider as much as with an experienced rider; it’s as easy and comfortable to ride in traffic as it is thrilling on the open road; and it packs all this in while keeping the price competitive. If, like me, you’re the type to want a bike that feels right both commuting and on the weekends, then this may just be the bike for you. 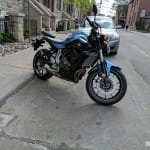 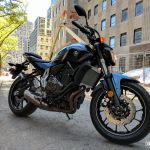 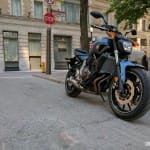 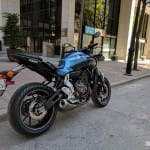 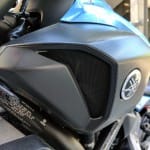 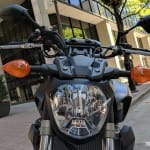 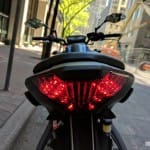 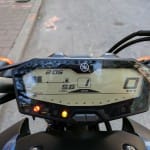 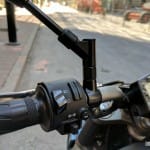 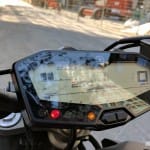 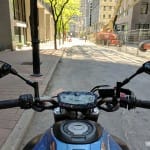