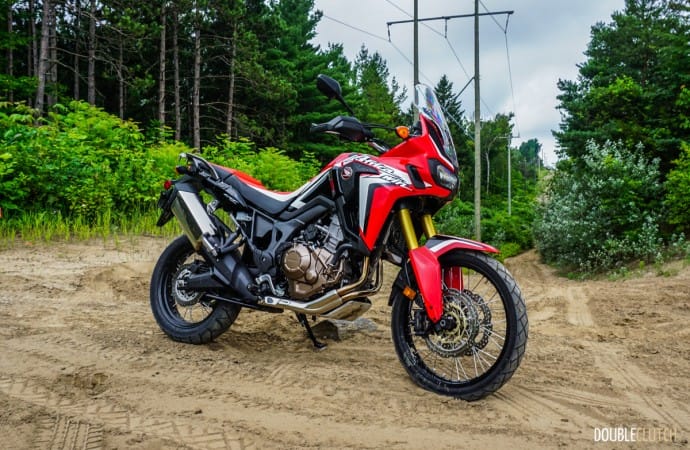 The Africa Twin definitely accomplishes what Honda set out to achieve.

The Honda Africa Twin was re-introduced in 2016, reviving the “Africa Twin” name after it was last seen on showroom floors in 2003. Competing with the likes of the BMW R1200GS (reviewed here), KTM 1190 Adventure R, Triumph Tiger Explorer and the Ducati Multistrada (reviewed here), the Africa Twin is lighter, more off-road focused and most notably it comes in cheaper than the competition. With its parallel-twin fuel injected engine derived from the already proven CRF250R and CRF450R, the 2017 Honda Africa Twin has plenty of torque for the trails.

Comfort is one way to describe the Africa Twin; a soft suspension and upright riding position make for a comforting ride, making it the ideal bike for lengthy cross-country trips. But this bike is no pavement princess. With its large 21” front tire, it’s evident that off-road capability was in mind while designing the Africa Twin. Ground clearance is very high at 9.8”, making for a ride that’s ready to crawl over fallen trees and boulders. 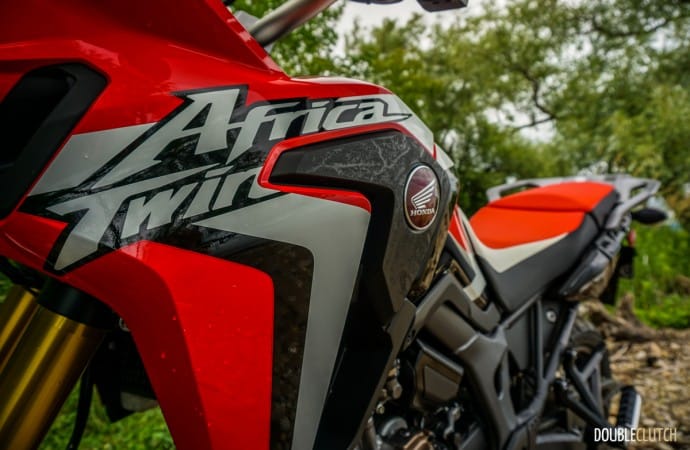 The Africa Twin comes with two transmission options, a manual six-speed, and a dual-clutch automatic. This particular bike has the proper set-up, a six-speed manual with conventional clutch. It has a feathery light clutch that’s easy on your wrist. First gear feels a little short speaking in terms of roads, but as mentioned earlier the Twin is geared towards off-roading, so a shorter first gear may not be ideal for city streets. It really is better suited for low-speed trail riding where a longer gear could translate to frequent stalling.

The seating position puts you down into the bike rather than on top of it, making the rider feel more in-tune with the machine. The CRF1000L engine may not be as big as its competitors, but appropriately so. Though the Africa Twin lacks engine displacement, it more than makes up for that with weight, rendering a bike that’s nimble enough without the unnecessary added weight with a larger engine. Plenty of torque, smooth and predictable throughout the entire rpm-range, the Africa Twin has more than enough power for an adventure setup. 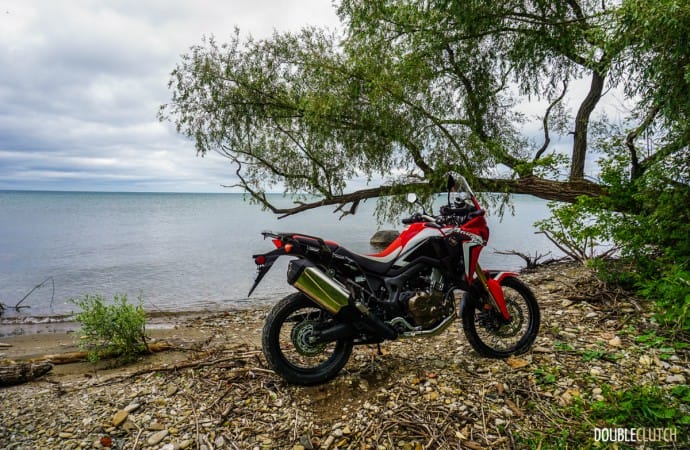 Wind deflection is very good, with hardly any wind disturbance on highways thanks to the standard windscreen (non-adjustable). If you’re of taller stature, there’s an optional tall windscreen to help keep the wind off your face, as well as an adjustable seat that ranges between 33.5” – 34.3” to help keep you sure-footed on the ground.

While in some ways the Africa Twin is geared towards off-roading, it lacks certain off-road traits that are expected on a Dakar style bike. First of all, the lack of a knobby tire is really dumbfounding, but my only guess is that Honda knows the majority of their customers aren’t going to be putting the Africa Twin through its proper paces off-road. The same can be said about the plastic bark busters that aren’t capable of, well, busting any bark. The skid plate seems to avoid protecting the exhaust, so upgrading to some type of skid plate that actually protects the engine and exhaust would be high on my priority list. 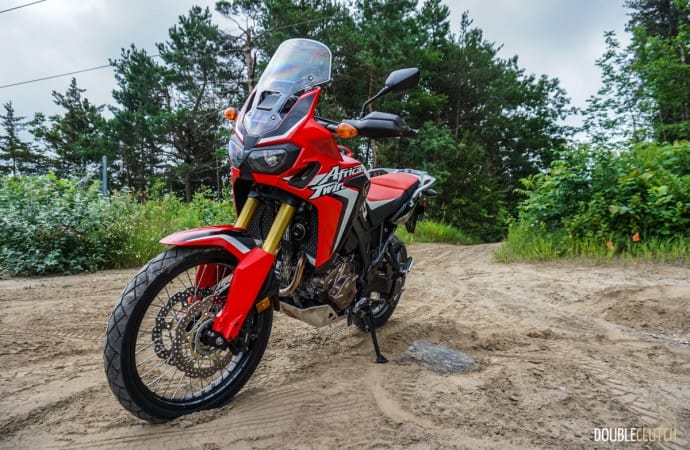 Some notable things to mention that Honda got right include the bike’s geometry. All the dimensions come together nicely, making for a comfortable and confidence inspiring ride that is the perfect blend for on and off-road riding. The large 21” front wheel also works in the Africa Twin’s favour for off-roading. Honda also enables the rider to control traction management with HSTC (Honda Selectable Torque Control). This includes three settings; but more importantly you’re able to turn it off. You’re also able to turn off the ABS to the rear wheel for when off-roading dictates.

Both of these are accomplished easily and on the fly with simple easy to use methods – a large button for the ABS, and a finger toggle for the HSTC. Honda also designed the Africa Twin’s air filters in a way that they can be removed for cleaning and replacing without the need to lift up the fuel tank, a seemingly insignificant detail, but one that will pay dividends if you frequent dusty trails. 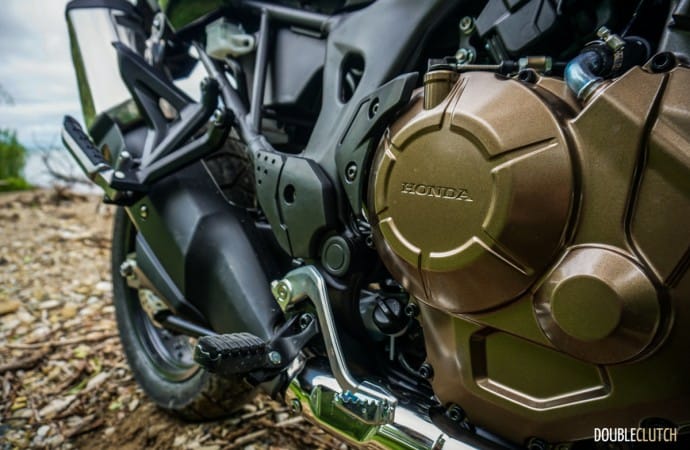 The instrument cluster is very user-friendly and easy to read on the fly. Largely displaying speed, gear selection, outside temperature and time spent riding, it displays everything you need, and nothing you don’t. It’s nice to see that Honda is back into the adventure game, and that they’ve made a bike that wears the proven “Africa Twin” name with pride.

Unfortunately, there seems to be a void in the adventure world. There’s a niche market that motorcycle manufacturers haven’t seemed to capitalize on. I long for the day that there is a street legal off-road bike that falls between the CRF250R and a KTM690 – something that’s light, simple and easy to service. 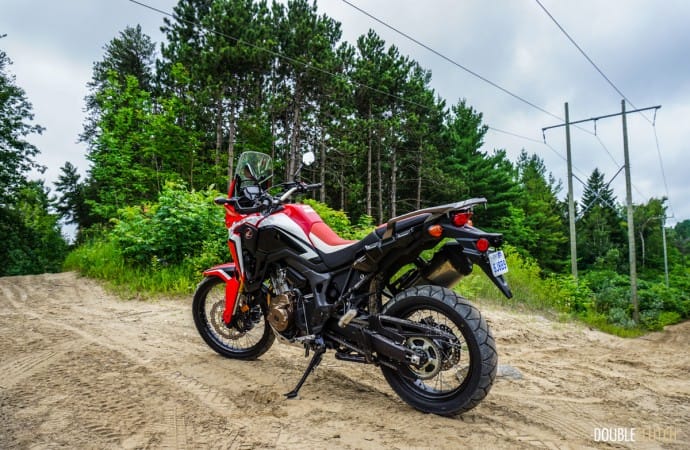 As awesome as the Africa Twin is, it’s still heavy (though lighter than all its competition) in comparison to dirt bikes, making its abilities limited for off-roading, and quite a work out to man-handle on the mono-trails. That said, the Africa Twin definitely accomplishes what Honda set out to achieve. This is a capable on and off-road bike that’s comfortable for road trips, while still being able to take a considerable beating off beaten path. Coming in at a $15,099 base price, and $15,478 as-tested, the 2017 Honda Africa Twin is definitely a terrific bike that’s sure to impress. 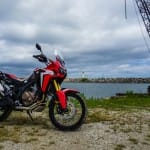 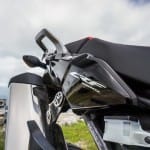 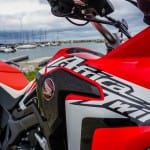 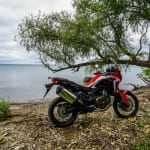 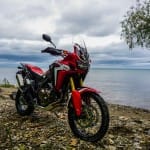 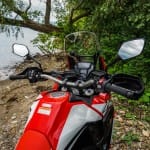 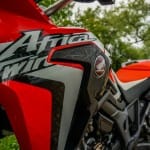 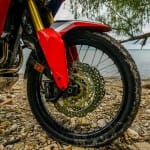 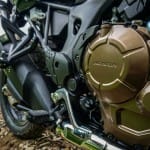 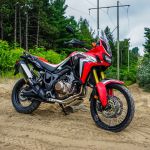 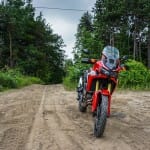 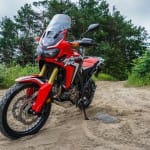 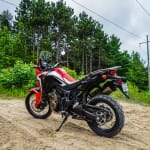 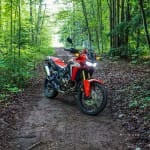 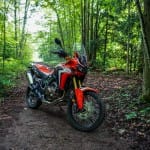 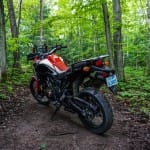