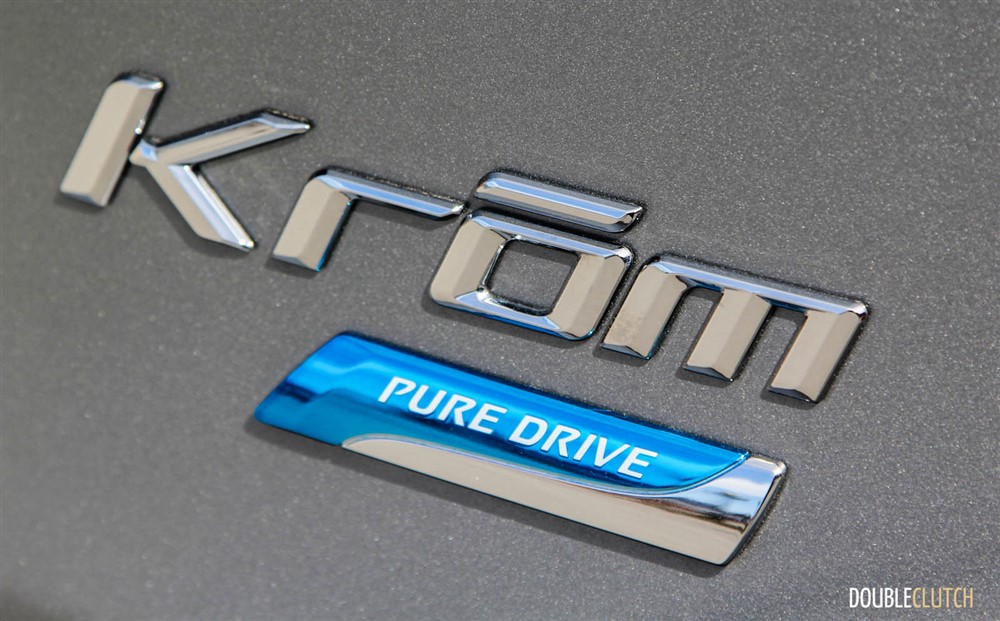 Eager and charming at the same time | Whizzing around the city though, this Micra is like a kid in a candy store.

With its enticing starting price of $9,998, the Nissan Micra is now the least-expensive car available for purchase in Canada. We recently sampled the base model, and really liked the value it presents, especially to first-time car buyers. However, as with any other vehicle, there are trim levels that tinker with options and can ultimately allow the car to have a more pleasant motoring experience. Nissan has done just this, by offering the Micra in a few distinct models, each catered to a specific niche of buyer. The 2015 Nissan Micra KRŌM arrived in our garage in a conservative but elegant Magnetic Grey, and with a big black maple leaf decal on the roof. I drove it for a week to see if it’s worthy of the extra $6,500 over the base car’s sticker. 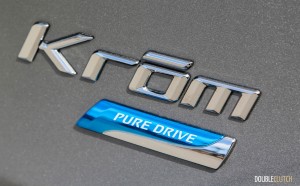 The KRŌM, pronounced “chrome”, is largely an appearance package that makes the Micra pop amongst the sea of subcompacts that all seem to look the same. Apart from the “KRŌM” badge on the rear decklid, this special edition also includes heated door mirrors finished in chrome, unique 15” alloy wheels (our tester was riding on a winter setup instead), as well as chrome exterior door handles and unique side moldings along the bottom of the doors. This edition is only available in two colors for added exclusivity; Magnetic Grey and Super Black, and the interior can only be had in a charcoal cloth. The seat upholstery is unique, and definitely goes a long way with the trendy look that the KRŌM is aiming for.

Apart from being a unique special edition model, this particular car is our first chance to try the 2015 Micra with the automatic transmission. The base model can only be had with a five-speed manual gearbox, but as we already know, the vast majority of Canadians would opt for an automatic when given the option. Surprisingly, Nissan hasn’t implemented their trusty CVT transmission here; the two-pedal option is an old-fashioned 4-speed automatic unit (a $1,000 option over the manual). Before jumping to criticize the gearbox’s modest four speeds, let’s keep in mind that the only available engine in the subcompact is a 1.6L 4-cylinder (shared with the Versa Note) with a zippy 109 horsepower and 107 lb-ft of torque. 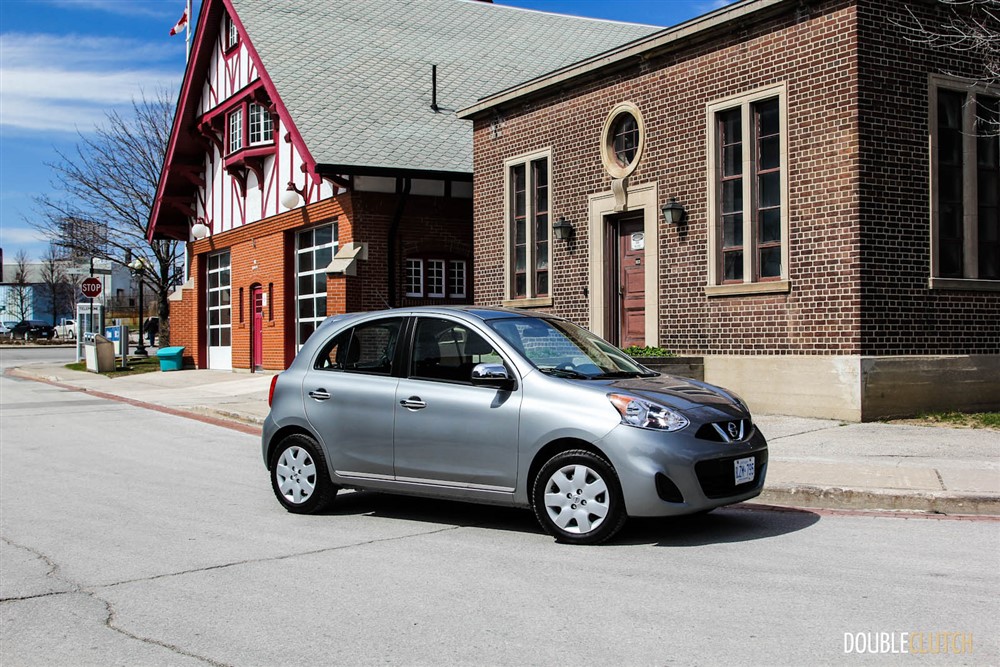 The Micra’s automatic transmission is actually a very manageable setup. There aren’t any hidden tricks here such as paddle shifters or a manumatic mode, but the gearbox responds pretty quickly and the car gets up to highway speeds with adequacy. As a traditional purist, I prefer the manual for darting around the city, but the majority of buyers will be very satisfied with this automatic. Of course, the smallest car in the Nissan lineup isn’t by any means intended to be a highway hauler – it’s meant for the city and behaves as such. Doing 100km/h results in the engine turning at 3,000rpm, and 110km/h pushes this number to about 3,300. At this point you can feel the little 1.6L buzzing loudly, but it’s not like the outgoing Smart Fortwo that absolutely despises highway speeds.

Fuel consumption is always a huge plus point when dealing with the subcompact class, and we’re used to sublime numbers when testing cars like the Micra and its rivals. We averaged 6.8L/100km with the manual transmission model that also was a little bit lighter than this one, missing things like air conditioning and power options. The KRŌM with the automatic transmission returned 6.7L/100km in combined driving, with a 50/50 split between city and highway. The chassis of this car is very lightweight and this certainly helps quite a bit with overall fuel consumption. The 41L fuel tank is on the smaller side, but this isn’t a huge concern of ours in the subcompact class. 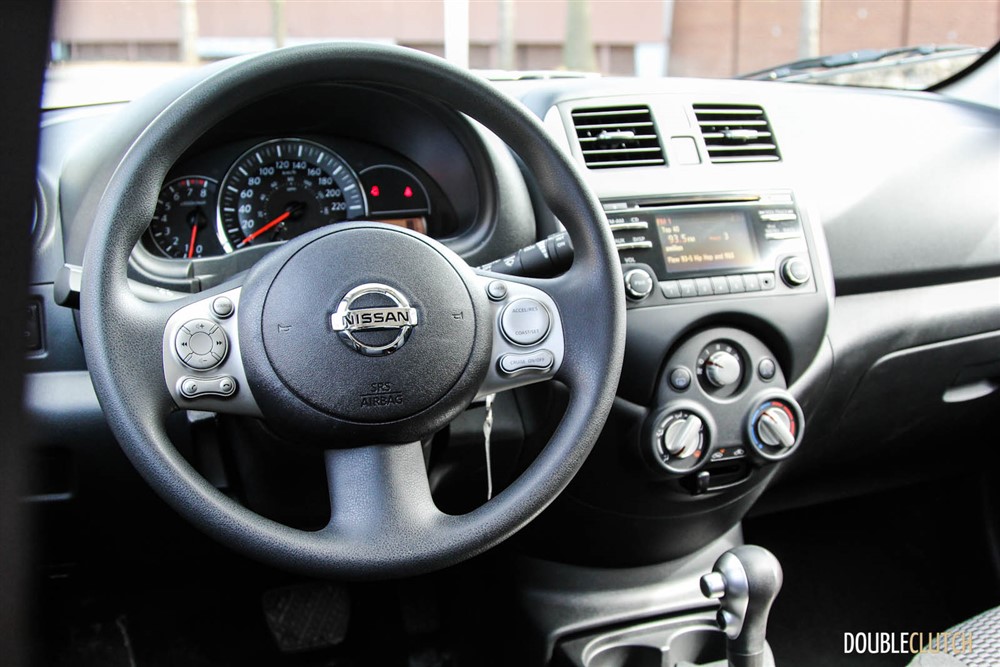 Whizzing around the city though, this Micra is like a kid in a candy store. It’s enthusiastic, reactive, and predictable. The steering is tight and quick, and the tiny turning radius means the Micra can make quick u-turns where other vehicles would be struggling with three-pointers. It’s small enough (with an overall length of 150.8”) to be parked literally anywhere, and its simplistic behaviour makes it seem friendly and welcoming. The brakes aren’t like the Brembo setup in, say, the Ford Mustang, but they’re quick to stop the car, and the ABS system is a nice touch in a subcompact.

Major competitor Chevrolet takes on a funky, modern layout to the interior of their subcompact, the Spark. Nissan on the other hand felt that a more traditional look might be what their buyers prefer, so the Micra sports a more conservative interior design. The layout is very similar to that of its larger sibling, the Versa Note, and there are also some cues we found similar to the outgoing Mazda2. Basically, everything is very simple to use and easily found. A concern I had with the base Micra was the lack of a center armrest for the driver – this has been rectified, as the KRŌM has a useful foldaway armrest connected to the driver’s seat. 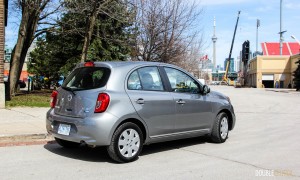 Rear accommodations aren’t shabby either. Where most subcompacts are truly miserable for rear passengers, the Nissan has a little bit more legroom than a few of its competitors, and its height means there isn’t a shortage of headspace, either. The rear seats can hold two reasonably-sized adults for a decent amount of time, but it’s really pushing it for three. The large windows mean visibility is good and there aren’t very many blind spots. This cheeky little hatchback definitely doesn’t feel like a step down from the Versa Note (or even the Sentra), and is noticeably nice to be in.

Features not included on the base model are standard here, as the Nissan Micra KRŌM is a lot closer to being a volume seller. From air conditioning to power windows/locks/mirrors, remote keyless entry, stability control, and ABS, this model has everything you would expect on a well-equipped subcompact. A nice surprise was the premium stereo with the 4.3” touchscreen and reverse camera. Of course, nobody with a subcompact should really require a reverse camera, but the fact that it’s there means you can back the rear end up even more when reversing, making for a more precise parking experience. 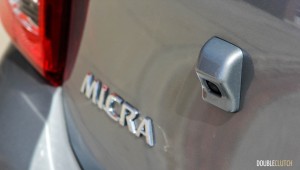 As someone who lives and works within Toronto’s downtown core, I truly am the target market for B-segment cars such as the Nissan Micra. I appreciate the little touches Nissan has added, such as the decision to go with the big (relatively) 1.6L instead of a small, possibly 3-cylinder engine. The Micra is not slow, and it’s definitely not boring. No matter where I went during my test week, curious passerby wanting to know more about the car approached me. Okay, maybe it was the maple leaf decal on the roof, but people definitely wanted to know more about this car. 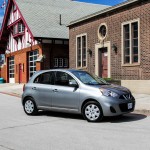 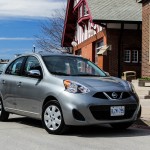 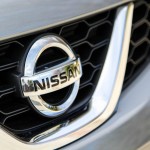 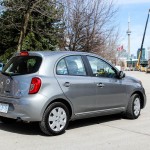 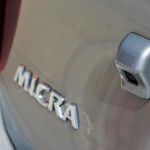 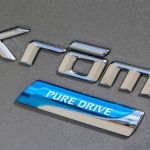 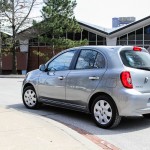 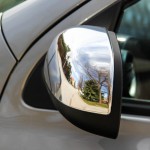 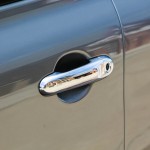 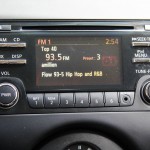 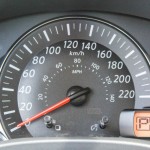 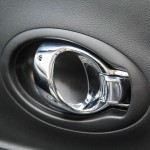 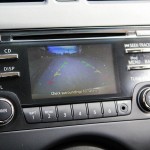 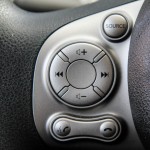 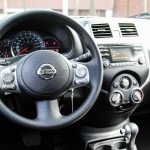 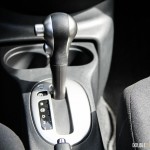 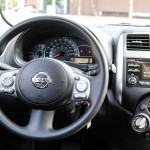 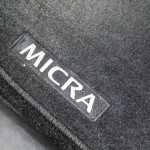